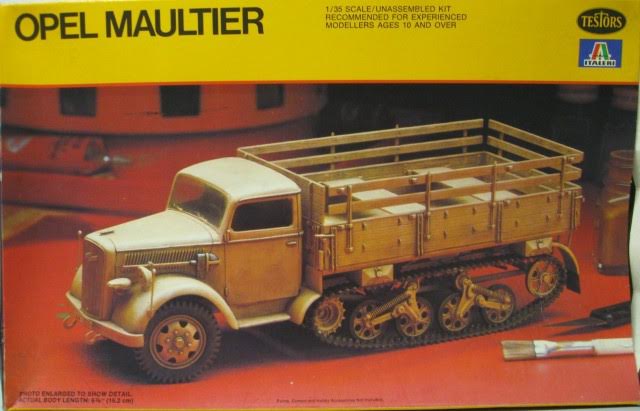 The Maultier (German for Mule) was developed to handle the immobilizing road conditions encountered by the German Army on the Eastern Front. Conventional wheeled transport vehicles were useless on the unpaved roads, the supply columns could not get through the mud and snow.,

To remedy this problem, a field workshop of the 2nd SS Division removed the rear suspension and wheels of a standard 3-ton truck and replaced them with the running gear taken from a captured Soviet light tank. This improvised halftrack proved superior to the regular trucks in rough conditions, and several more were converted. The Maultier then went into production by a number of manufacturers and 6,000 were produced.

The best known Maultier conversion was built by Opel, who reclassified their sturdy, reliable "Blitz" 3-ton 4x2 truck (Testor kit 824) as 2-ton because of the tracked suspension. Some Maultiers were fitted with an enclosed house-type body and were used as ambulances, command vehicles, and radio vans. Because of the critical shortage of raw materials toward the end of the war, many late-production Maultiers were built with cabs made of cardboard and wood.
Almost 800 Opel Maultiers were produced with an armoured body. Half of that number were mobile rocket launchers, and the other half ammunition carriers. The armor was from 6mm to 10mm thick, and the vehicle weighed 7.1 metric tons.

Though designed for use on the Eastern Front, the Maultier saw service in North Africa, Italy and Western Europe, and was employed by the German Air Force (Luftwaffe) and the Army and Waffen SS. Though a stop-gap solution, the Maultier proved useful and reliable, despite its limited speed and load-carrying ability. After the war, a few Maultiers were used briefly in civilian service.

Italeri is an older prolific model company based in Italy. They make all manner of model subjects in the popular scales. Testors is based in Rockport, Illinois USA and at one time was the importer/distributor of Italeri.

This kit comes is Testors signature orange box. It is the end-opening type with a inner sliding tray. I like the tray as it keeps parts from getting past the end flaps (like with most end-opening type boxes) to become lost. Good move Testors !

The box art has a color photo of the model made up and posed atop a work bench. It is in overall earth yekllow with a license plate number of SS 248 847.

The bottom of the box has 6 color photos of the model made up in 3 different paint and marking schemes by Mike Good.

One is the box art subject.

The third one is in a base of sand yellow with wide green bands. I cannot make out the license no.

Above these photos is list of features of the kit: Kit produced from 163 precisely detailed pieces. Model is complete with full frame and running gear. Action features include rotating tires, pivoting rear suspension parts, flexable tracks and optional soft top for the cargo box. The instruction sheet makes construction easy and features full paint and camouflage information. A useful addition is a page devoted to weathering techniques for added realism. In addition, each Testors plastic model kit includes authentic decals by Micro Scale. Usually available only through specialty hobby stores, these exact scale decals have the well-earned reputation for being the thinnest and most accurate in the industry.

The kit printing was done in the USA and the parts made in Italy. The copyright date of the kit is 1980 and Testors street address in Rockford is provided.

One side panel has a listing of Testors brand glue, paints, tools, brushes, tape, tac-rag and tweezers. This is followed by a small color side view of the Maultier in Panzer-grey.

The other side panel has the history of the Maultier, followed by the small color side view of it in Panzer-grey again.
​WHAT'S IN THE BOX:

This kit contains 2 large tan parts trees, a clear tree, black vinyl tires and treads and the decal sheet in a sealed cello bag. The instructions complete the kits contents.

Page 1 of  the instructions begins with a black and white photo of the model made up. It is impossible to tell what color it is. Below it is the history of the Maultier, BEFOR STARTING and PREPERATION OF PARTS and PAINTING instructions.

Loose page 9 & 10 has camouflage and marking instructions as one 3-view and three 2-views.

A Mautier the 160th Grenadier Regiment (motorized), Division "Von Mateuffel", 5th Panzer Army, Tunisia, May 1943 in overall sand-yellow. It has the license no. WH 394 713 and a Afrika Korps palm tree with swastika on the left front fender and cargo compartment sides and rear. It has a white tactical sign on the right front fender and the right side of the rear wall of the cargo department.

A Maultier of the 284th Grenadier Regiment, 96th Motorized Infantry Division, XI SS Army Corps, Ukraine USSR, September 1944 in overall primer yellow. The license number is WH 728 242. It has a division logo and tactical sign of the front fenders and on the rear cargo department wall.

A Maultier with the 11th SS Motorized Infantry Regiment, SS Division "Das Reich", 9th Army, Borodino (near Moscow) USSR, April 1942 in overall Panzer grey. It has the license no. of SS 218 O47 and a division logo and tactical sign on the front fenders and the rear of the cargo compartment.

The trees are numbered but not alphabetized. Instead they are labeled with geometric symbols: 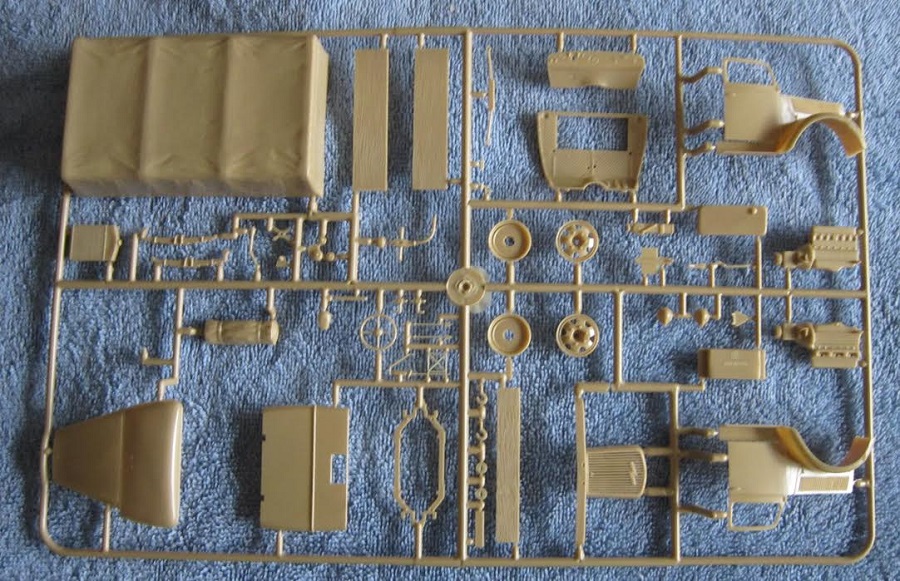 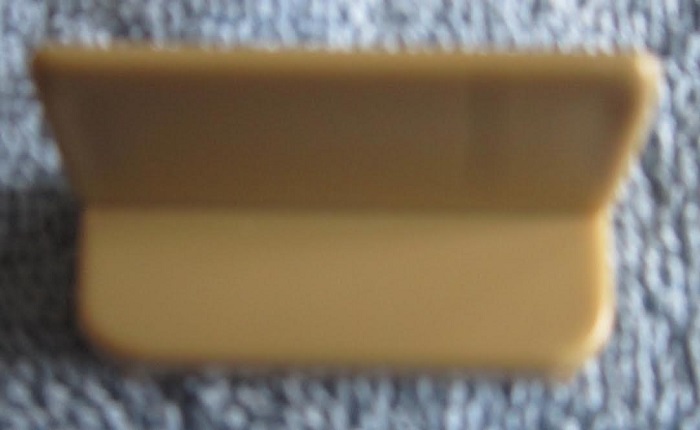 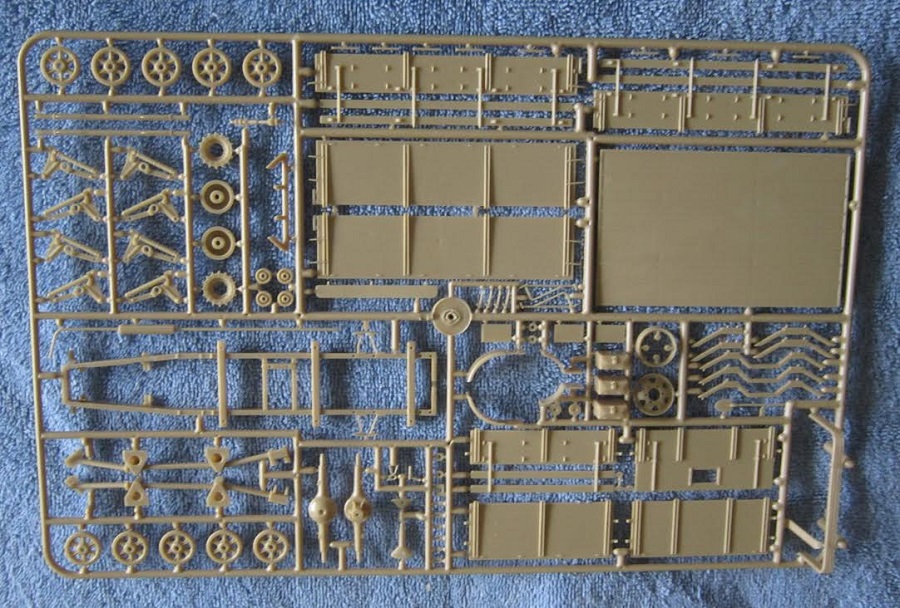 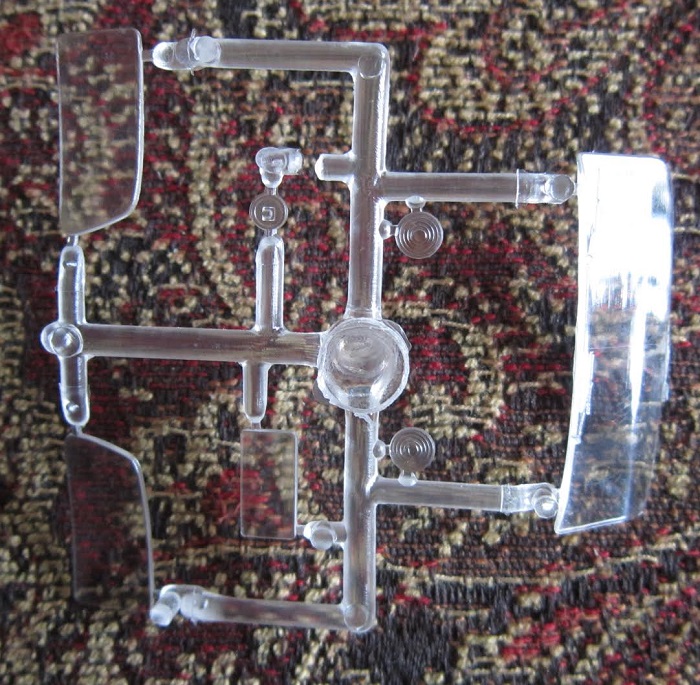 Next is the solid black circle black  vinyl tires (3 parts) 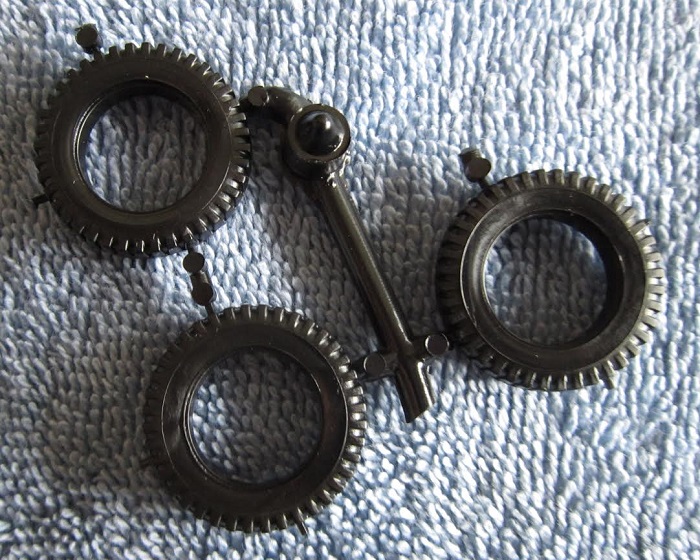 ​Finally, the black solid square black vinyl rubber-band type treads (2 long runs & 2 short spare runs) These are the old type that have to be heat-riveted into loops and not the newer glueable type.

The decal sheet completes the kits contents. Unfortunately, over the years I seem to have lost this sheet...groan.
There are no figure in the kit, nor a cargo load. Otherwise I highly recommend it.
I purchased my kit years ago from a guy that was going to be a distributor of Testors/Italeri kits, but he went out of business after a short time