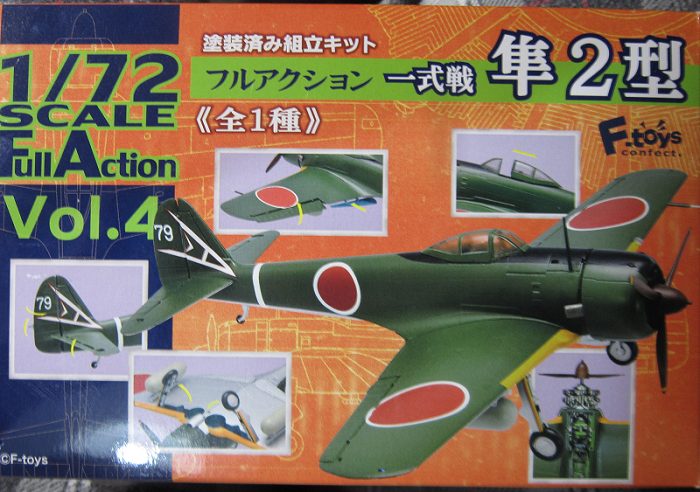 Although the famous Zero-sen, or Japanese Zero, received the most of the publicity as Japan’s foremost fighter during WWII, a great deal of credit is due also to the Nakajima Ki-43 Hayabusa. Preceding the Zero-sen by a mere three months, the first Hayabusa began its test program early in January 1939.

The Hayabusa was the result of a well-planned program to produce an interceptor and escort fighter to replace the Japanese Army’s fleet of ageing Ki. 27 fighters. The requirements for the new fighter included a top speed of 311 mph, an average rate of climb of 3,280 feet per minute to 16,500 feet and a range of 500 miles.

Specified armament was two 7.7 mm machine guns. Difficulties arose when it became apparent that each provision of the specification could be met only by dropping of the others. Careful planning of the airframe led to a light-weight, low drag design coupled to one of the most powerful engines available in Japan.

Part of the light-weight was due to the fact that self-sealing fuel tanks and protective armor were not included in the design. A shortcoming 9 of nearly all contemporary Japanese aircraft. Considerable drag reduction was achieved by the first fully retractable landing gear used on a Japanese Army fighter.

The first three prototypes were delivered to the Army for service tests. The Army pilots who tested the new planes were used to the nimble ability of the Ki. 27. Their reaction to the heavier Hayabusa was decidedly unfavorable!

The preproduction models were delivered by the end of 1940, each with progressive modifications to improve performance. The most important of these improvements was the “combat flap”. When lowered during action these flaps increased control sensitivity  and lift as well as tightening the turning radius.

The latter was a decided advantage in a dogfight. Following the introduction of the combat flaps, Army pilots became enthusiastic about the Hayabusa. Full-scale production of the Ki-43 began in April 1941, and when Japan went to war that year forty Hayabusa’s were in operational units.

The Hayabusa was first used as an escort fighter on bombing missions to Hong Kong and Burma. The first Allied unit to encounter the Hayabusa was the American Volunteer Group (Flying Tigers) in China.; As production increased, Hayabusa’s began replacing the obsolete Ki.27 and it soon became the Japanese Army’s new standard fighter.

The Japanese pilots were delighted with their new warplane and began attacking Allied fighters with a great deal of confidence in the Hayabusa. Allied pilots, who later evaluated the Hayabusa, were strong in their praise for its sensitivity and maneuverability and they all agreed it was definitely a pilot’s airplane.

Its turn and stall characteristics were superior to any comparable Allied fighter. The Hayabusa had a remarkable rate of acceleration from 150 mph to 250 mph, and the wiser of her opponents learned to avoid any combat at such speeds.

On the other hand, the lack of firepower, armor protection and generally slower cruising speed, when compared to Allied fighters, counteracted those finer characteristics.

The first Ki-43-IIA was completed in February of 1942. It featured improvements intended to make it more competitive with the newer American fighters beginning to appear. Pilot protection in the form of 13 mm armor plate was added and the vulnerable fuel tanks were now made self-sealing.

The first production models of the Hayabusa’s were armed with two 12.7 mm cowl-mounted guns. Strangely enough, this same inadequate armament remained on the later versions of the fighter and were considered the weakest feature of the plane.

The name Hayabusa translates to Peregrene Falcon. Allied pilots identified the Hayabusa by the code name OSCAR. By either name the Ki-43 earned a notable reputation for itself in WWII.

Platz and F-Toys are both based in Shizuoka City, Japan. Platz is the seller of this kit and F-Toys manufactured it.

This kit comes in a un-wrapped end opening type box. I am no fan of this type of box, because invariably parts or the decal sheet find their way past one of the end flaps to become lost forever. Give me a tray and lid type box any day of the week.
The front of the box has a photo of the finished model with 5 photos of kit features as well as F-Toys logo.

On the back of the box there is a side view photo of the finished model and the kit parts on their runners. 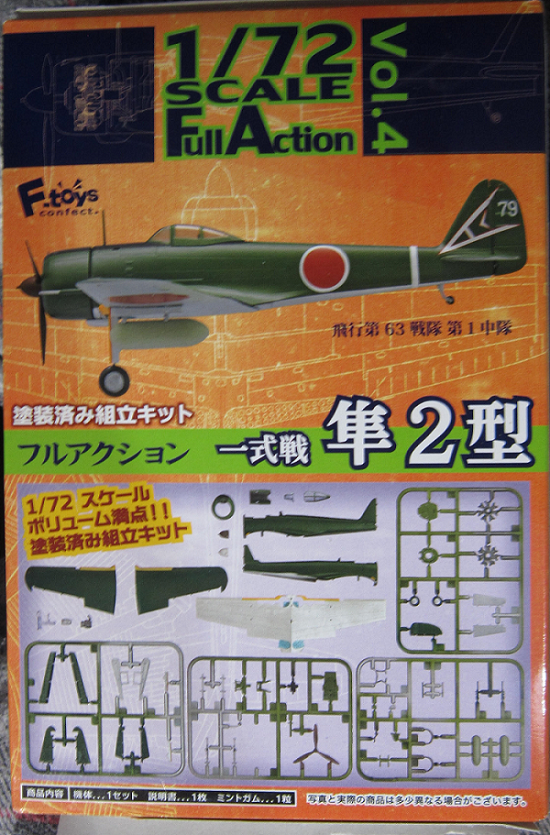 ​The kit contains a clear vacuformed container with a base and lid held shut with scotch tape. It has recesses in it that hold the parts and the decal sheet.
There is no instructions in the kit. I am told by Platz that this was a sample and the instructions will probably come later on. 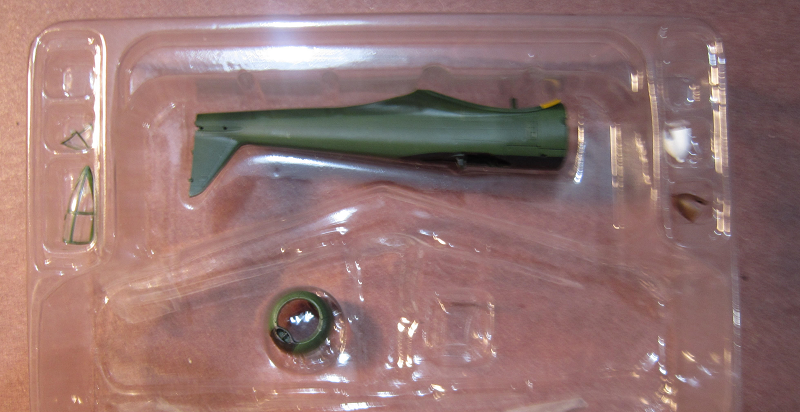 ​Strangely, there is a white Chicklet chewing gum in a sealed clear cello bag at one end of the box taking up some slack. 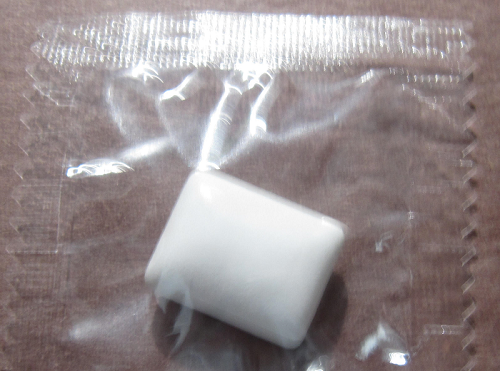 ​There are 5 dark-green trees, a loose cowling and cockpit framing with clear windows inserted, loose fuselage halves and two propeller spinners in the molded recesses.

Some parts have been partially factory painted in silver.

The first dark-green tree holds: landing gear doors, wing and elevator flaps. The landing gear has been painted silver  and also the bottom of the elevator and wing flaps. (10 parts) 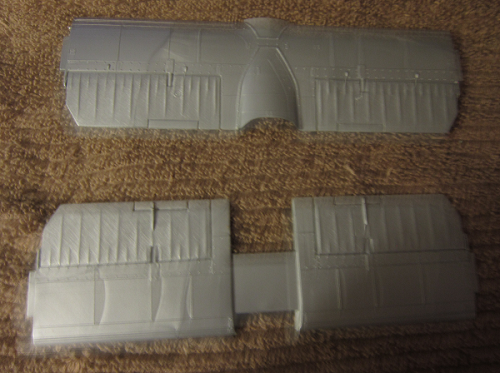 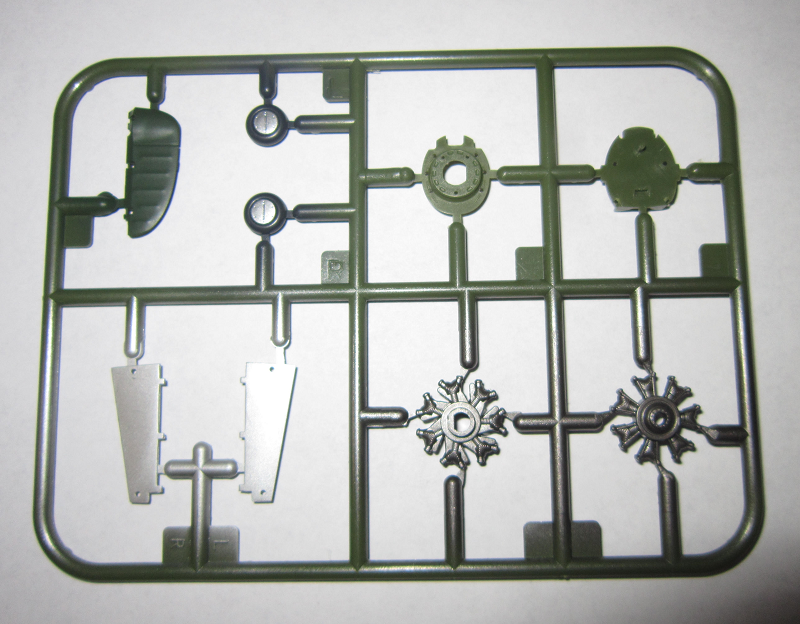 The drop tanks are factory painted tan, the machine guns are painted black, the tip of the pitot tube is painted silver, as is the gun sight and some braces (14 parts) 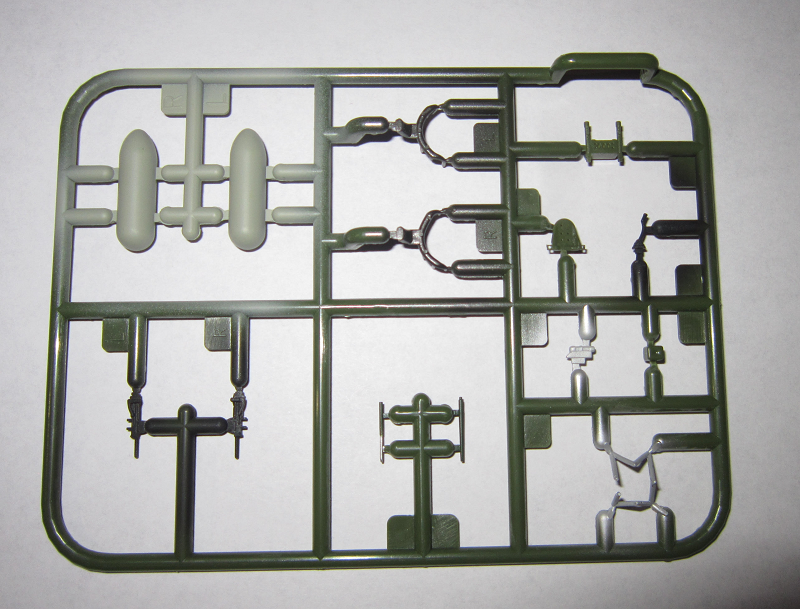 The landing gear legs and the shackles and the tail wheel are painted silver, the dashboard is painted black. (11 parts) 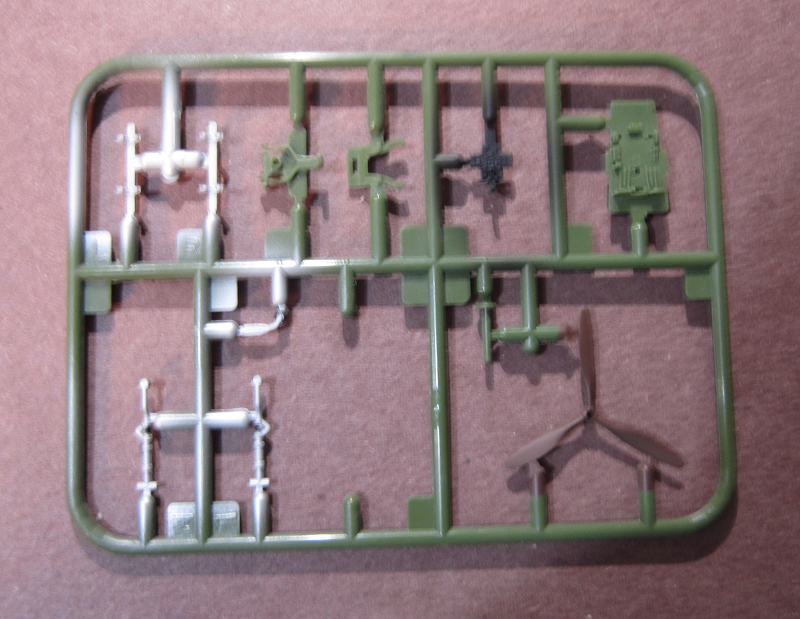 The leading edge them is painted yellow. (2 parts)

It is painted silver and has yellow leading edges also. (1 part)

​Next are the loose fuselage halves and the cowling. (3 parts) 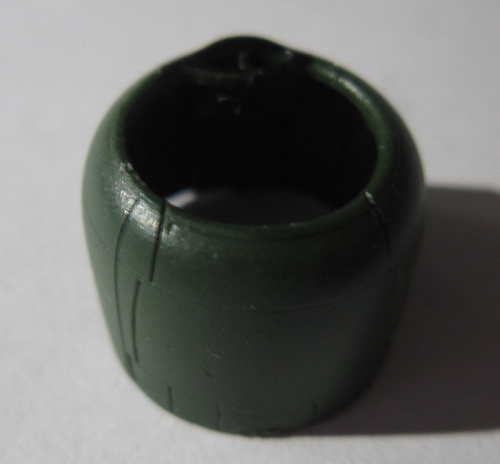 ​The cockpit framing is in 2 sections, the windscreen and the rest. It has the clear parts already inserted into them.

​Final parts are the two alternate propeller spinners. One is dark-green and the other one is painted white.

​Features of the kit are: It reproduces the internal structure of the engine and machine gun compartment. Each control surface is movable and the canopy slides open or shut. Some parts are pre-painted.

The decal sheet completes the kits contents and includes five unit markings on a special limited decal. It has a clear sheet covering it's face to prevent the surface of the decal from scratching. 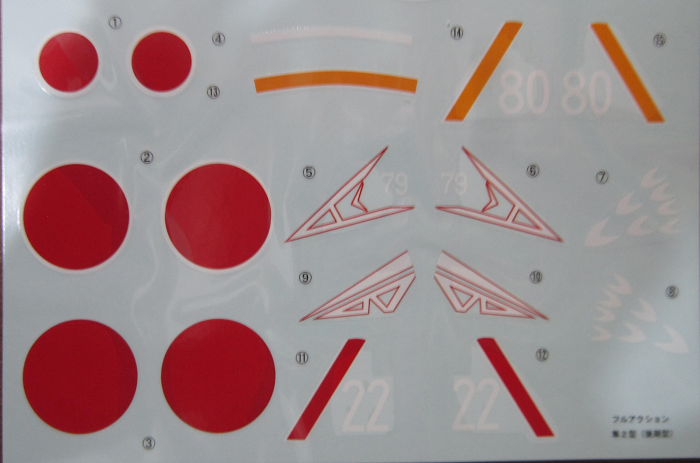 ​This is a new molding  by F-Toys. Control surfaces - ailerons, elevators and rudder are movable. Cover of main landing gear is also movable. Detail is all of the engraved type.

I want to thank the folks at Platz for sending me this review sample and also F-Toys.

All of Platz's products can be viewed on their web site at:
http://www.platz-hobby.com/