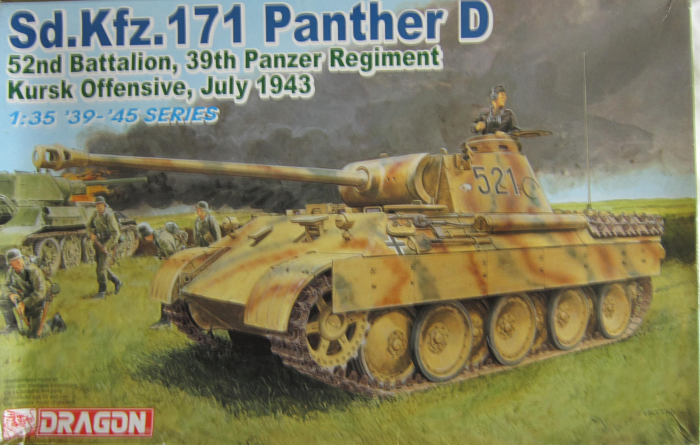 Kit no. 6164
By Ray Mehlberger
OUT OF PRODUCTION

However it is shown for sale at 3 locations overseas.

The Panther was a compromise. While having essentially the same engine as the Tiger I, it had more efficient frontal hull armor, better gun penetration, was lighter and faster, and could traverse rough terrain better than the Tiger I.
The trade-off was weaker side armor, which made it vulnerable to flanking fire.

The Panther proved to be effective in open country and long range engagements, but did not provide enough high explosive firepower against infantry.

The Panther is a German medium tank deployed during World War II on the Eastern and Western Fronts in Europe from mid-1943 to the war's end in 1945. It had the ordnance inventory designation of Sd.Kfz. 171. It was designated as the Panzerkampfwagen V Panther until 27 February 1944, when Hitler ordered that the Roman numeral "V" be deleted. Contemporary English language reports sometimes refer to it as the Mark V.

The box art shows a Panther D moving across a grassy field with 4 German infantrymen behind it and a burning Russian T-34/85 tank.

The Panther is in a base of earth yellow with red-brown and dark green bands on it. It has a red turret number 521 outlined in white. In front of the turret number is a small white panther's head logo.

One corner of the box art says the kit contains 444 parts and is intended for modelers over the age of 10.

One side panel shows a color box art of kit no. 6139, a German Sd.Kfz. 250/10 w/3.7cm Pak by DML. Followed by a caution saying that when you use glue or paint don't use it near an open flame and be in a well-ventilated room, in 6 languages, including English.

Kit is not for children under 3 years of age due to small parts with sharp edges. The copyright of the kit is given as 2002, over DML's street address in Hong Kong, China and the kit was made in China.

​The other side panel has 3 color photos of the model made up in the box art scheme, followed by a repeat of the copyright date and DML's address again.

The kit contains 11 light-gray part trees and 4 white strips of sheet plastic that are die cut and embossed with the panels of the side skirts, the decal sheet and the instructions.

The instructions consists of a single sheet that is printed in color on slick-coated paper. It accordion-folds out into 8 pages in 14" x 8 1/4" page format.

Page 1 begins with a full color repeat of the box art over the parts trees illustrations. Some trees are shown to have parts browned out. Meaning they are excess and not needed to complete the model.

Page 2 begins with CAUTIONS about the kit, over international assembly symbol explanations and a suggested paint color listing of GSI Creos and Italeri brands of hobby paints, in 6 languages, including English.

Parts in all the assembly steps are colored in light tan. Different!!

Page 3 through through 7 give a total of 25 assembly steps.

Page 8 is the marking and painting instructions. Two 4-views are shown.

1. A Panther D with the 52nd Battalion, 39th Panzer Regiment, Kursk Offensive, July 1943. This is the box art scheme (already described above).

It is overall earth yellow with a German cross on the rear of the hull and a black turret number 445 high on the turret sides.

Below this is the decal application instructions in 6 languages, including English, the copyright date of 2002 and PRINTED IN CHINA. 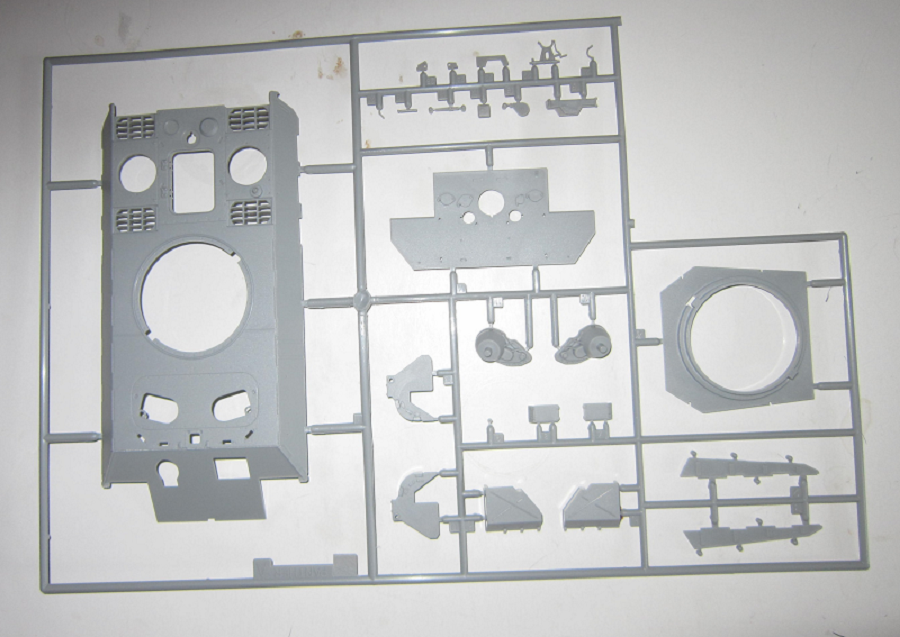 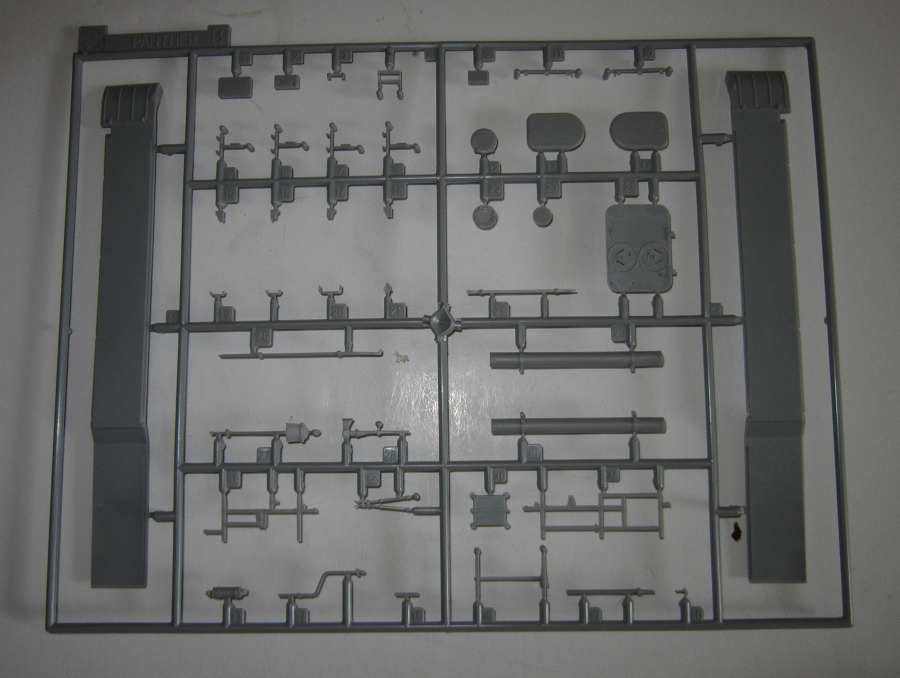 ​Light gray letter C is the hull bottom part. The bogies are molded into it. 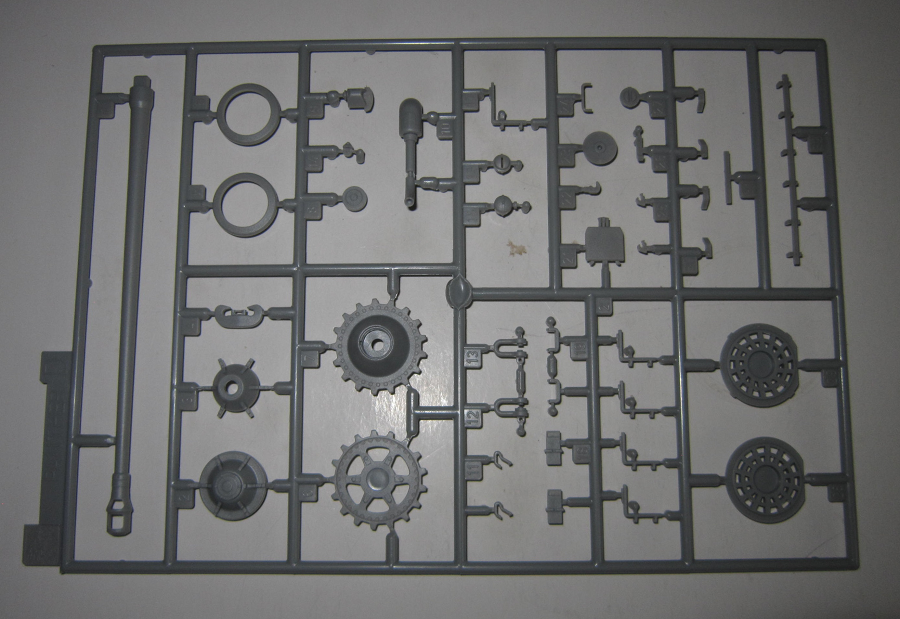 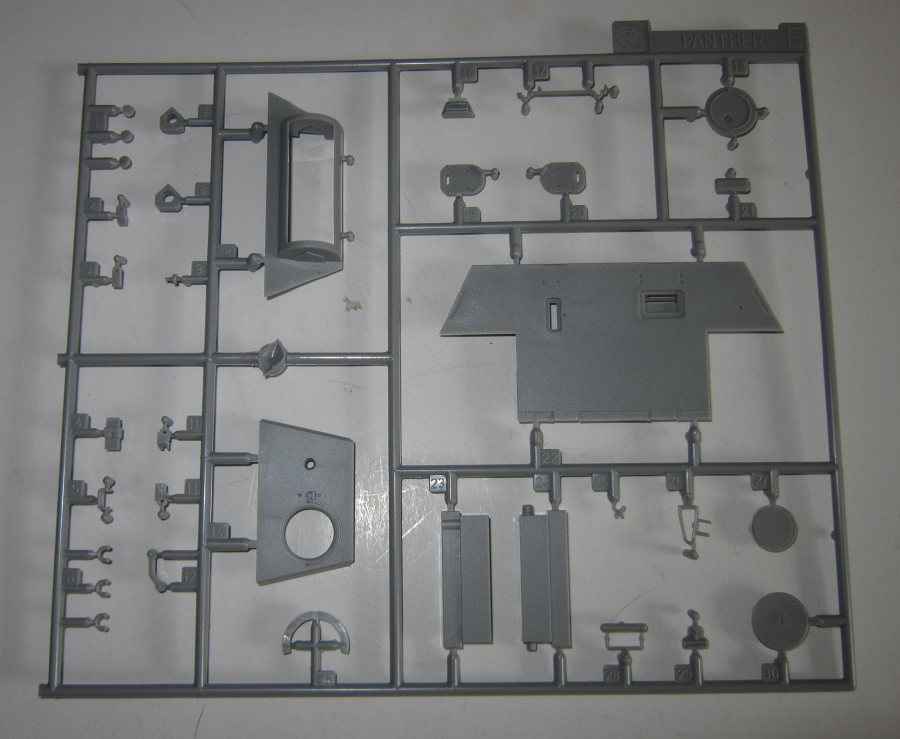 There is no letter K tree. 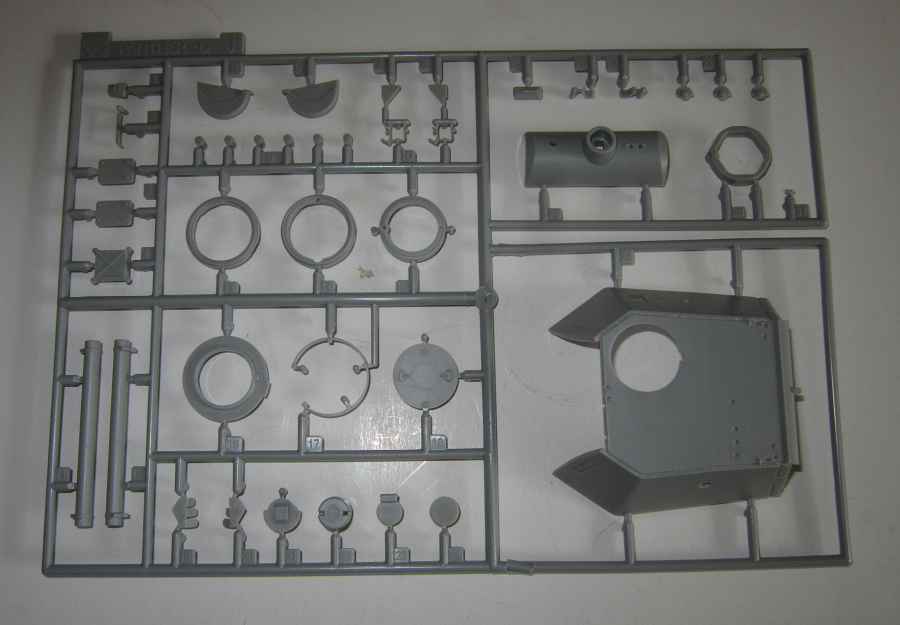 ​There are 4 identical light gray letter L trees. They hold the road wheels and individual track links (56 parts per tree) 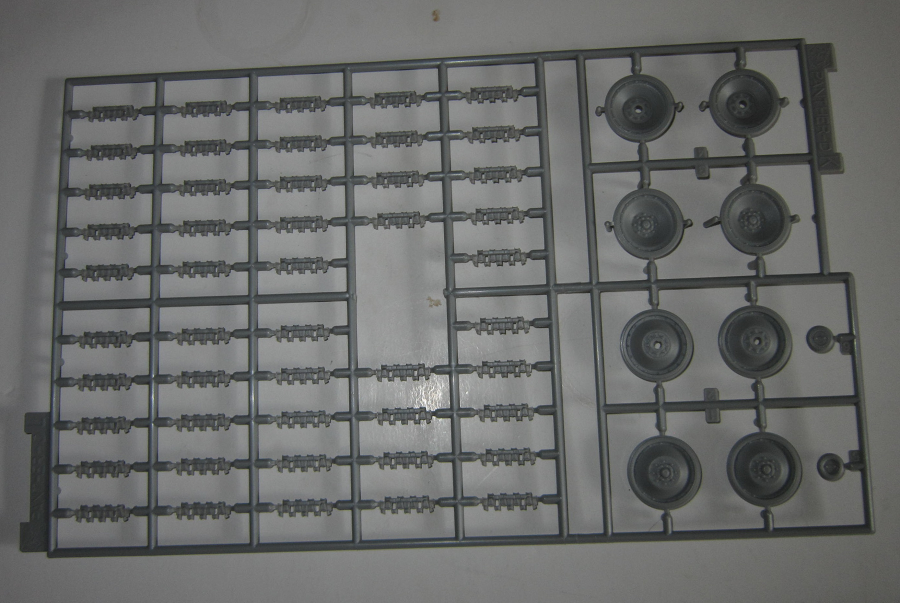 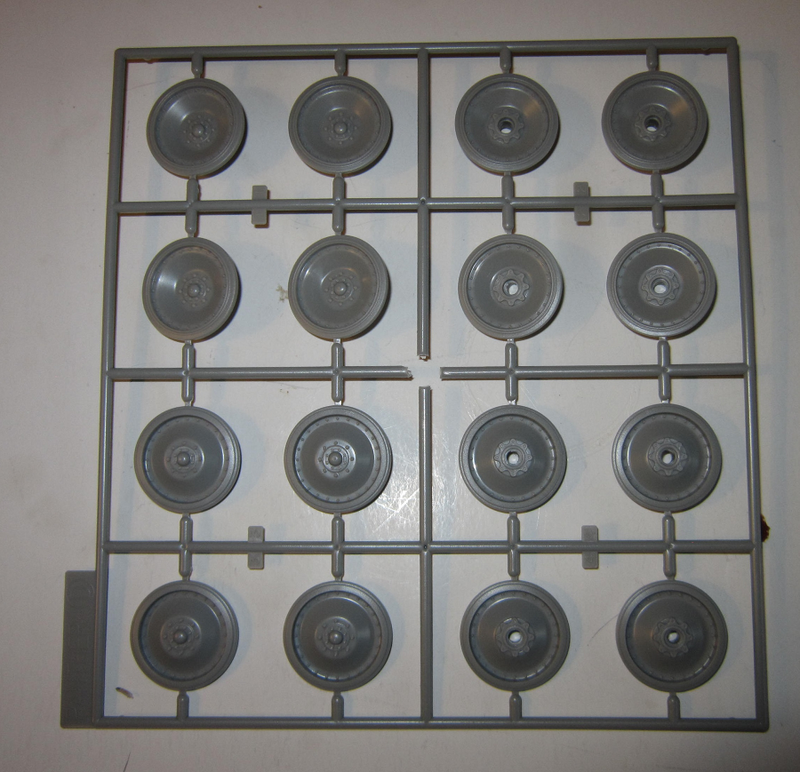 ​PS is the 4 strips of thin white plastic sheet that is die cut and embossed with the shape of the panels of the side skirts.

​There are no crew figures, interior details (either in the hull or turret) and no clear parts.

I am adding a set of my company's (Armor Research) no. 1008 PE engine air intake screens (designed for the Tamiya Jagdpanther) and my company's set no 1007 PE for the Nichimo Panther G. 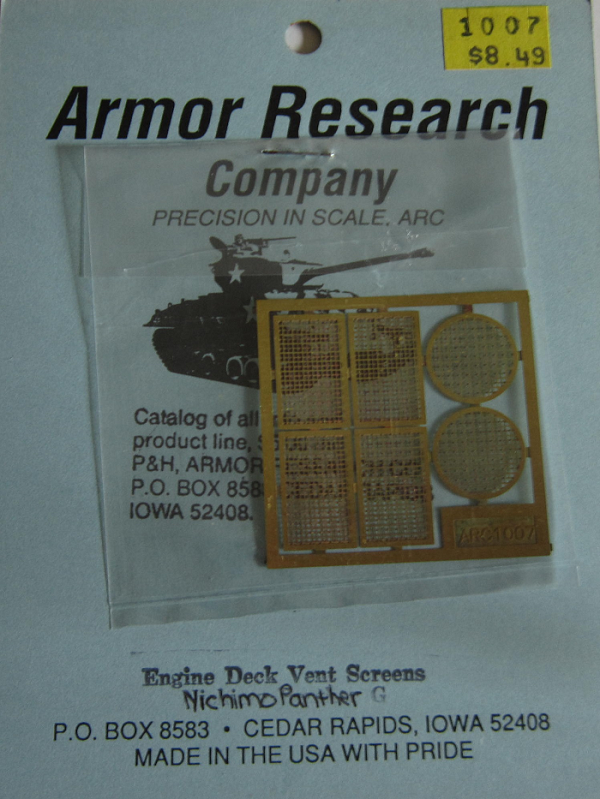