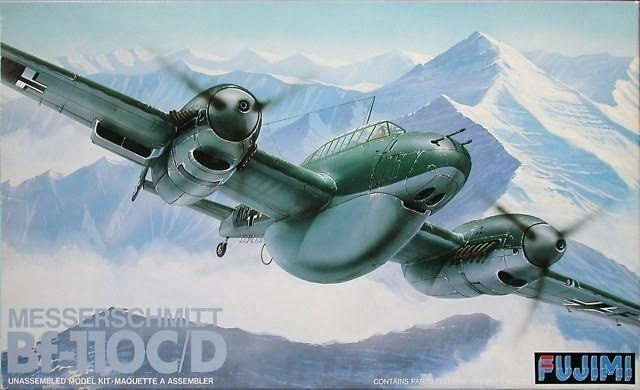 The model C engine was changed to the DB601A engine. The speed was improved and the shape of the tip of the wings was changed, and though changes in the cooling system, among others, the radiator was made more compact.

The appearance and performance of the models C-1 through C-4 were practically the same. Model C4/B had an EDC250 bombing mount. After the Model C came the Model D, Model E and Model F.

From Model G on, the plane became a true nightfighter plane equipped with the various types of radar equipment and a variety of weapons. Some had 30mm guns, others 37mm guns.
From the Battle of Britain on, the plane appeared on the front lines once again as a night fighter.
​THE KIT:

The box art shows a Bf-110D-1/R-1 "Dunklebauch" with a large belly tank, shown from below and flying over a snow-covered mountainous terraign. The fuselage code is black M8 + yellow F black A.

One side panel has 2 color side profiles:

1. A Bf-110C-4 in a base of light grey with medium grey spots. It has a hornet on the sides of the nose and a yellow fuselage band before the black fuselage code B9 + IN.
This aircraft also is with 6/ZG76.

2. A Bf-110D-3 in a base of light grey with large dark grey splotches. There is a black spear point with a white bird on it on the sides of the nose.

The other side panel is all in Japanese. I don't know what it says. Perhaps the history of the aircraft? There is a repeat of the box art in the center and the only English says that the kit does not contain cement or paint.
​WHAT'S IN THE BOX:

The instructions consist of a single sheet that accordion folds out into 12 pages in 10" x 5" page format.

Page 1 begins with a black and white repeat of the box art, followed by the history of the Bf-110 in Japanese, German, Chinese, English and French.

Fujimi's address in Japan is at the bottom of the page.

International assembly symbol explanations and a paint list are across the bottom of the pages.

Page 6 has a 3-view illustration of general markings.

1. A Bf-110C-1 of 6/ZG76 that is in a splinter pattern of 2 shades of green over a light blue undercarraige. It carries the fuselage code of black MB + yellow C black P and a has a shark mounth on the nose.

2. A Bf-110C-4/B of 5/ZG1 "Wespen" it is in a base of grey with green spots over light blue undercarraige. It has a yellow fuselage band followed by the black fuselage code G9 + IN.

3. A Bf-110C-7 of 7/JG5 in overall dark green above light blue undercarraige. It has a doxhound dog chewing on a Russian aircraft on the sides of the nose and the fuselage code of black LN + red K black R.

4. A Bf-110D-3 of 9/ZG26 in a base of grey with green spots. It has a white nose and a white fuselage band. There is a white rooster on the sides of the nose. The fuselage code is black 3U + yellow L outlined in black and black T. The last 2 letters are over the fuselage band.

5. A Bf-110D-3 of 3/ZG26 in a base of grey with green spots. It also has a white fuselage band and a black spear head with a white bird on it on the sides of the nose. It has the fuselage code of black 3U + white B outlined in white and black T. The last 2 letters are over the fuselage band.
​Page 10 and 11 have general instructions in 10 languages, including English, over the part trees illustrations.

The general instructions are also on page 12.
​WHAT'S IN THE BOX: 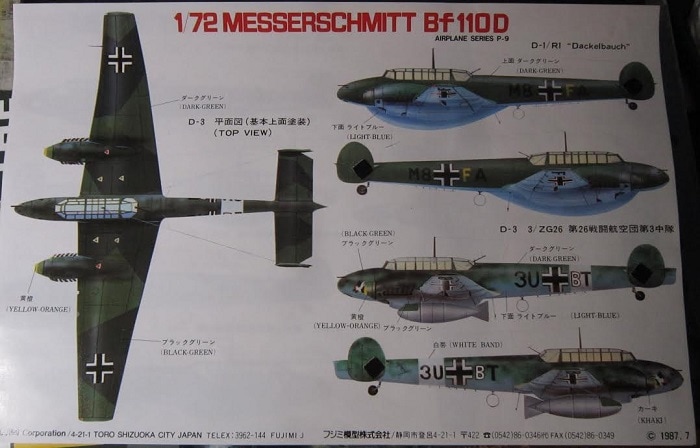 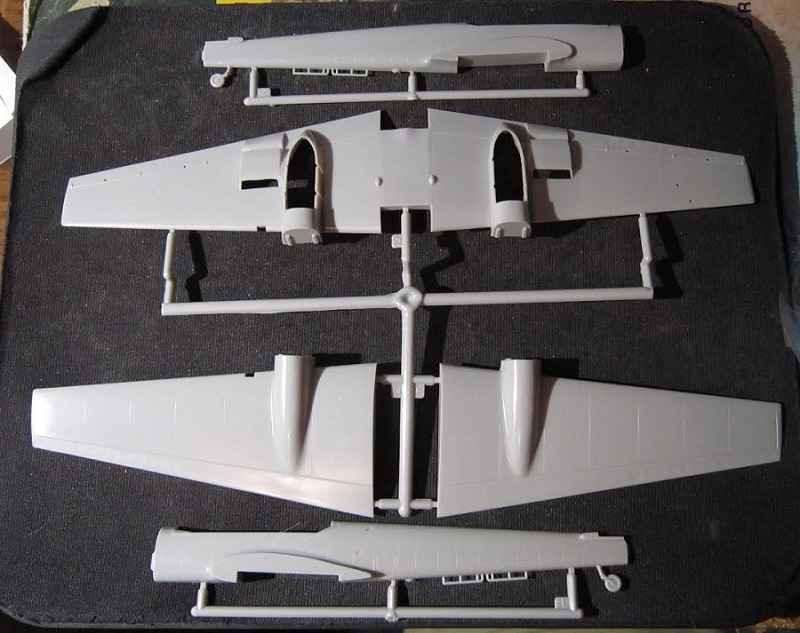 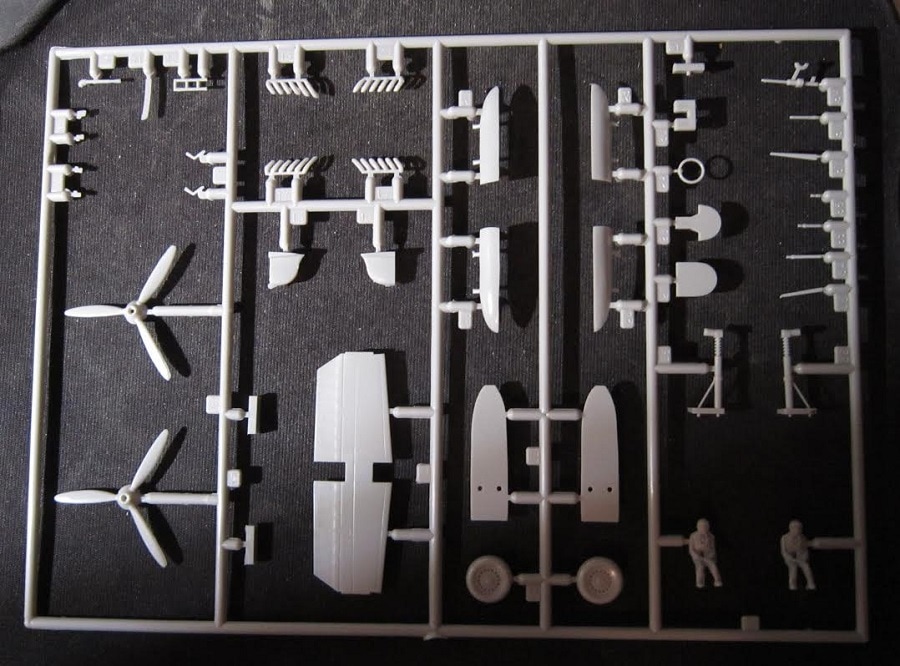 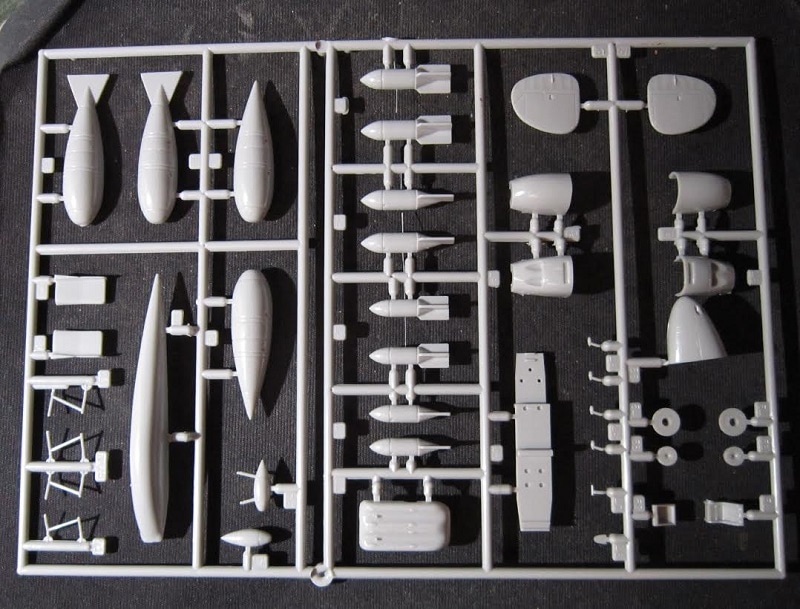 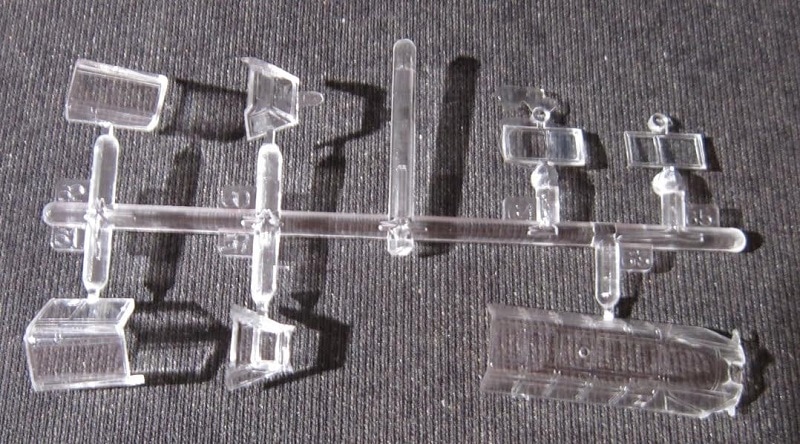 ​The 2 decal sheets complete the kits contents. In addition to the unit markings mentioned there is a unit marking of a white diamond with a ladybug on it and lots of stencil markings and a decal for the dashboard instruments. However, there are no swastikas provided to go on the rudders. This omission is to keep the kit politically correct in countries where that symbol is outlawed.

​This is a neat kit. The panel lines are engraved, but the control surfaces are molded solid.
Recommended.

I bought my kit back in the 70's at my local hobby shop.