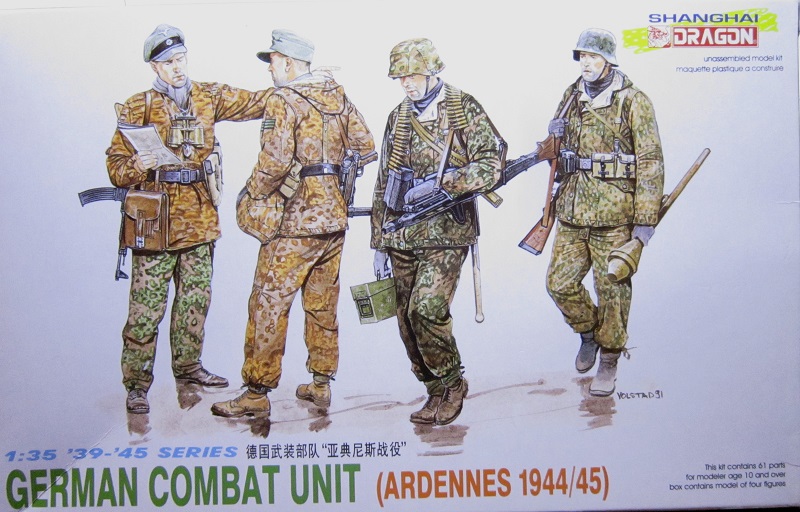 This kit comes in a shrink-wrapped end opening type box. I am no fan of this type of box, because invariably PE frets, decal sheets or other small parts find their way past the end flaps and become lost forever.

The box art shows four SS infantrymen posed against an all-white background. This is similar to the way that Tamiya does all their box arts too.

All of the infantrymen are wearing SS spotted camouflage uniforms. An officer is reading a map and talking to an infantryman that I believe is probably an NCO. This is because of the three hash marks shown on his left sleeve. Two other infantrymen and walking by.

The officer is wearing a field-grey peaked hat. He has a map in his hand and is armed with a MP43 assault rifle slung over his shoulder. He has a dispatch case on his belt along with a ammo case for the MP43 and a pair of binoculars slung around his neck.

The NCO that is talking to him wears a cloth peaked grey field-cap. His jacket is reversible to winter-white.  He is armed with a MP40 machine pistol. Under his belt in front is a potato masher type grenade. On his belt is ammo cases for the MP40.

The first infantryman that is walking by also wears a jacket that reverses to winter-white. His steel helmet has a spotted camouflage cover on it. He is armed with a MG42 machine gun slung from his left shoulder. He is carrying an ammo can for it in his right hand and a belt of ammo around his neck in front. He has an accessory caqse on his belt and a shovel in a carrying case. Slung on his back is a spare barrel case and a gas mask canister.

The second infantryman that is walking by also wears a jacket that reverses to winter-white. He wears a bare steel helmet. He has a 98K carbine slung from his right shoulder and is carrying a panzerfaust anti-tank grenade launcher in his left hand. He has ammo cases, a gas mask canister and a case on his belt.

One side panel says “The kit contains parts for four figures. Paint and glue are not included” in Japanese, English, German, French, Italian and Chinese marked with color illustrations of the flags of the countries that speak those languages. This is followed by Dragon’s street address in Shanghai, China, their telephone and FAX number, the copyright date of 1997 and MADE IN CHINA.

The other side panel has 2 color illustrations of the box arts of other kits that Dragon markets: kit no. 6003 German Combat Unit (Normandy 1944) and kit no. 6001 Kfz. 164 “Nashorn”. This is followed by the statement that the kit is not suitable for children under 3 due to small parts, in multiple languages including English. The kit is designed for modelers over 10 years of age.

The back of the box serves as the assembly and painting instructions in full color. Each figure is illustrated from the front and rear of him. Paint companies suggested are Gunze Sangyo Aqueous Hobby Color, Gunze Sangyo Mr. Color and Italeri.

Under the painting and assembly instructions there are black and white illustrations of: a P-38 pistol holster, the MG34 accessory case, M35 dispatch case, G43 ammo pouch, MR40 ammo pouch and a M43/44 ammo pouch. All the illustrations on the box are done by Ronald Volstad. 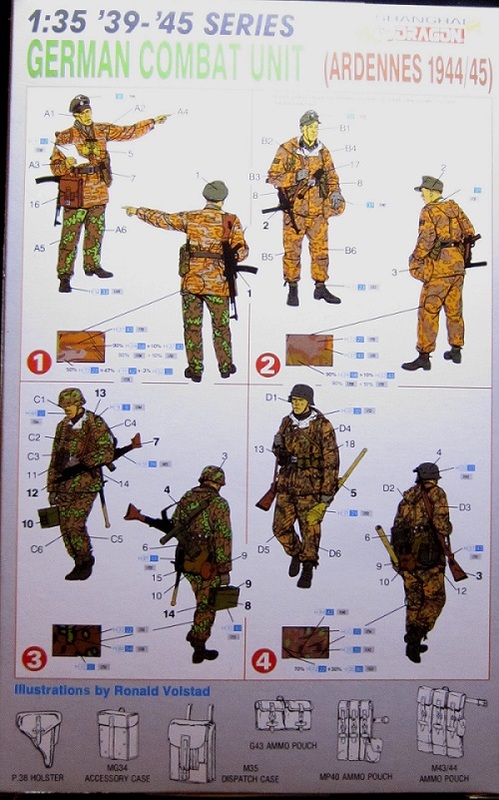 The box contains one large grey parts tree in a sealed cello. Inside that cello is a second small grey tree in its own sealed cello.

The large grey tree holds the parts for the four figures. They are each divided into separate heads, torsos, arms and legs. There are various pouches, a P-38 holster, a shovel in its carrying case, a potato masher type grenade, 2 gas mask canisters, 3 steel helmets, 2 cloth peaked field caps, ammo pouches, a pair of binoculars and 2 canteens. (46 parts) 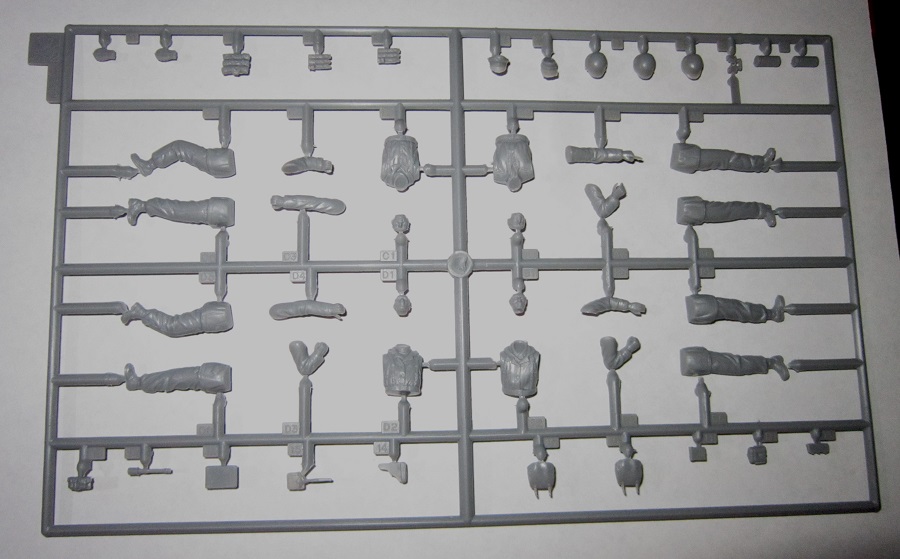 The small grey parts tree holds: the MP42 with a folded and extended bipod, an ammo can for it and the ammo belt, a spare barrel case, the MP40, MP43 and 98K carbine and the panzerfaust, a drum magazine etc. (14 parts) 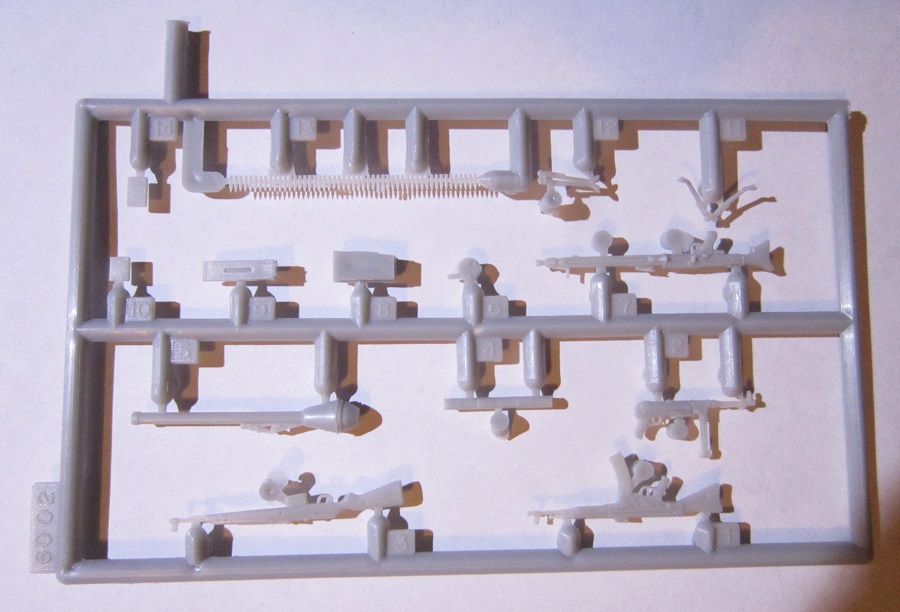 The figures have very good detail. However, they are in kind of ho-hum poses, not action ones.

I only have maybe one other kit that is labeled as being Shanghai Dragon. The majority of what I have all say Hong Kong.

I won my kit at a IPMS contest in their raffle years ago.