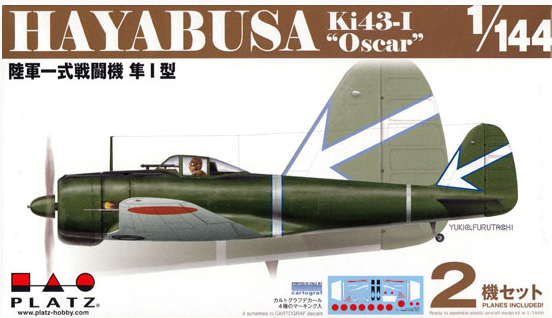 The Allied reporting name was "Oscar", but it was often called the "Army Zero" by American pilots because it bore a certain resemblance to the Mitsubishi A6M Zero, the Imperial Japanese Navy's counterpart to the Ki-43.

Both aircraft had generally similar layout and lines, and also used essentially the same Nakajima Sakae radial engine, with similar round cowlings and bubble-type canopies (the Oscars being distinctly smaller and having much less framing than the A6M).

While relatively easy for a trained eye to tell apart with the "finer" lines of the Ki-43's fuselage — especially towards the tail — and more tapered wing planform; in the heat of battle, given the brief glimpses and distraction of combat, Allied aviators frequently made mistakes in enemy aircraft identification in the heat of a dogfight, reportedly having fought "Zeros" in areas where there were no Navy fighters.
ike the Mitsubishi-produced A6M Zero, the radial-engined Ki-43 was light and easy to fly and became legendary for its combat performance in East Asia in the early years of the war. It could outmaneuver any opponent, but did not have armor or self-sealing tanks.

Its armament was poor until its final version, which was produced as late as 1945. Allied pilots often reported that the nimble Ki-43s were difficult targets but burned easily or broke apart with few hits.

In spite of its drawbacks, the Ki-43 shot down more Allied aircraft than any other Japanese fighter and almost all the JAAF's aces achieved most of their kills in it
Total production amounted to 5,919 aircraft. Many of these were used during the last months of the war for kamikaze missions against the American fleet.

Platz is a prolific model company. They manufacture all manner of model subjects in the popular scales.

They are based in Shizuoka City, Japan.

This kit comes in not shrink-wrapped, blousy end-opening type box. The box is 2" too long.

I am no fan of this type of box, because invariably parts or the decal sheet will find their way past one of the end flaps to become lost forever.

The box art shows a color illustration of an "Oscar: that is dark green over a light grey undercarriage. It has 2 white fuselage bands and a white diagonal arrow across the rudder.

It is posed against a dim color illustration of just the rear end of the fuselage. Both these images are posed against an all white background. Similar to how Tamiya brand also does the majority of their box arts.

Platz's web address is given on one corner on the box art and there is a color illustration of the Cartograf brand decal sheet in the kit and there are markings on the sheet for 4 schemes. It says the kit holds 2 models of the "Oscar".

One side panel gives features of the kit: Unassembled and painted plastic model kit in 1/144th scale, 2 planes included, model makes up to be 62mm in length (2 1/2"), there are 4 schemes on the Cartograf decal sheet, glue and paint are not included. Some parts are extremely sharp. Handle carefully. Do not use fire while using glue or paint. Kit is suitable for modelers 15 and over, in Japanese, English and French.

​The other side panel shows 2 color photos of the models made up in the 2 schemes.

The first is in the box art scheme. It further shows diagonal white stripes atop the wings.

The second "Oscar" shown is bare-metal with a red lightning flash down the sides of the fuselage and a narrow white fuselage band, followed by a 1-paragraph history of the "Oscar" in Japanese and English and Platz's telephone and FAX numbers, web and street addresses.

​The bottom of the box has four color side panels and is a color and marking guide.

This "Oscar" was with the 64th Hiko Sentai, flown by the commander Major Tateo Kato, Burma, 1942.

2. A "Oscar" in the same color scheme as the box art scheme, with a white lightning bolt running from the rudder down the fuselage side and 9 victory marks, illustrated a white circles above the lightning flash.

3. A "Oscar" that is overall bare-metal with a black anti-glare panel in front of the windscreen, with large white squares with the Japanese natural red circle marking on them on the sides of the fuselage and under the wings.

4. Another all bare-metal "Oscar" with a black anti-glare panel in front of its windscreen. It has a red lightning flash down the length of the fuselage sides and a narrow white fuselage band. 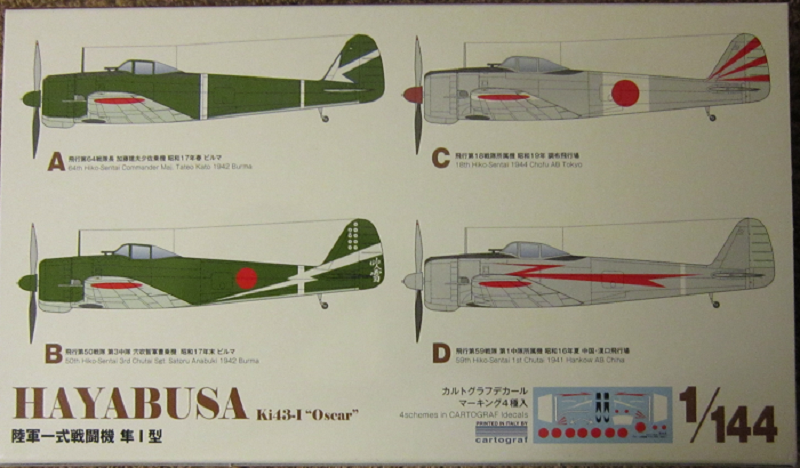 This kit contains 2 identical light-grey trees, loose light-grey fuselage halves and the cowling and a clear tree in 2 self-sealing clear cello bags and the decal sheet in its own self-sealing cello bag with a tissue to protect its face and the instructions.

The instructions consists of a single-sheet printed on slick coated paper and folded in the center to create 4 pages in 5 3/4" x 8 1/4" page format. Folded again to fit the box.

Page 1 begins with a one-sentence history of the "Oscar", over the parts trees illustrations and repeat of the features of the kit in Japanese and English, over the first 2 assembly steps.

Page 2 gives a remainder of a grand total of 5 assembly steps.

Pages 3 and 4 are painting and marking guides in color.

Page 3 has the box art scheme at the top as a 4-view, over another 4-view of the "Oscar" with the 50th Hiko Sentai (already described above), over a suggested paint color listing of Mr. Color and Model Master brands of hobby paints.

The bottom of the page has another 4-view of the "Oscar" with the red lightning bolt down the sides of the fuselage (again, already described)

Below them is the suggested paint color listing repeated.

Trees are not alphabetized or illustrated in the instructions. Bad move Platz ! 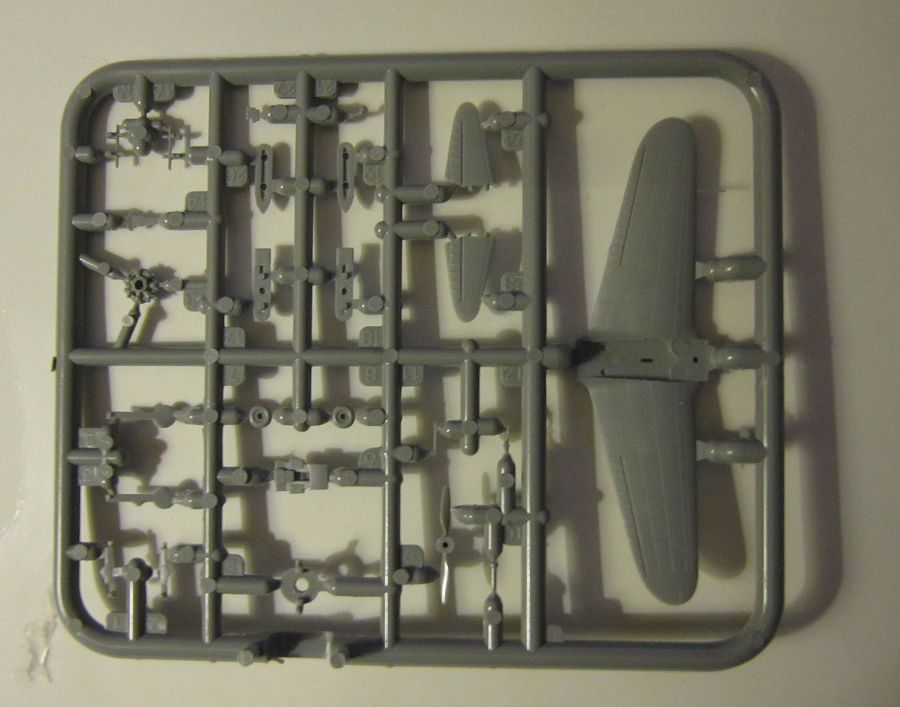 ​The 2 sets of fuselage halves and the cowling are light-grey and loose. 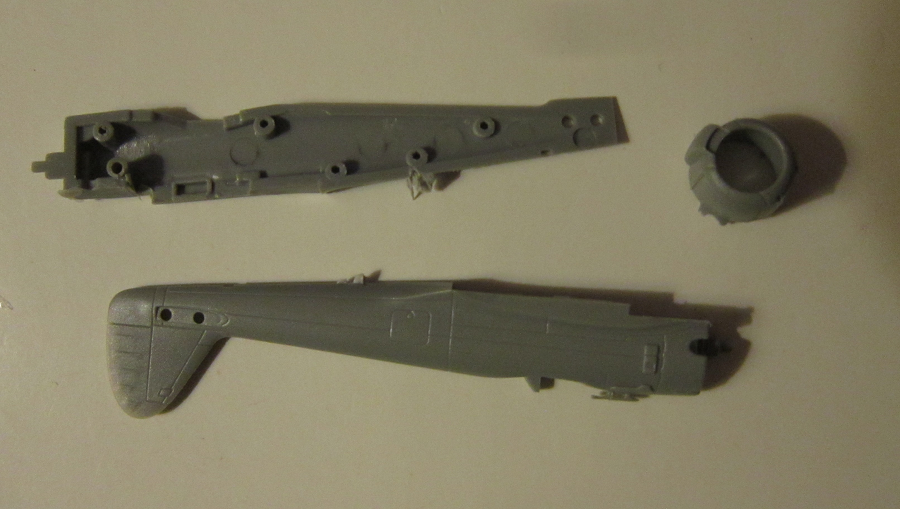 ​The identical clear canopies are each one piece. 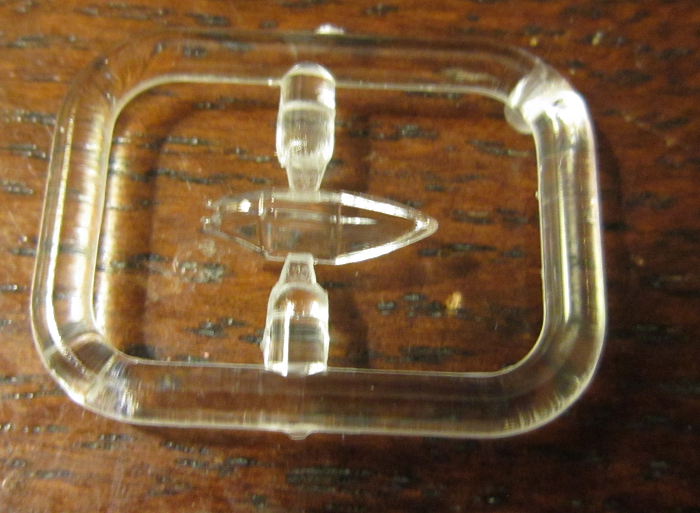 ​There is no pilot figure included.

Detail is very nice for this small of  scale.

I want to thank Platz for this review sample. All their products can be viewed on their website at:
www.platz-hobby.com