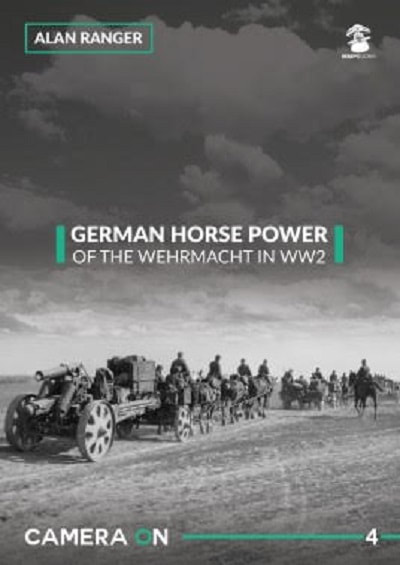 Book Review of German Horse Power of the Wehrmacht in WWII
Camera On no. 4
Author: Alan Ranger

MSRP: $25.00
​This new photo album, one of first in the MMP/Stratus "Camera On" series, contains 180+ photos of the horse-drawn elements of the German ground forces.

Despite the several hundred thousand motor vehicles used by German forces in World War Two, the German armed forces were still extremely reliant upon the horse.

Horse-drawn transportation was especially important for Germany, as it was lacking in its own natural oil resources. Both the German infantry and artillery relied heavily upon horse drawn elements, especially in their supply chain and logistics. Each German unit employed thousands of horses and thousands of men taking care of them.

During the war, many custom-built horse drawn wagons as well as captured units were included in the general transportation of the Wehrmacht.

MMP is based in the UK. They have all their books printed in English by their associate Stratus in Sandomierz, Poland. Stratus also does their own series of books in both the Polish and English langurages.

I want to thank Casemate Publishing who sent me this review sample and also Roger Wallsgrove, Editor-in-chief of MMP.