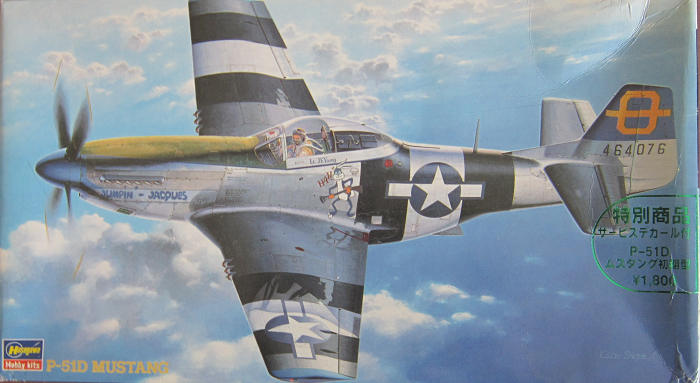 My kit has a copyright date of 1991. It is available numerous places on the net here and in Europe for around $20.00.
​HISTORY:

The P-51 Mustang was a fighter plane that was miraculously developed in 117 days after an agreement was concluded in April 1940 between the British Purchasing Commission and North American Aviation Inc. It was first exported to Britain, but due to America's entry into the war the U.S. Army Air Force also used this plane, although it gave a cool reception to the P-51.

The D type is a model created by lowering the upper part of the rear section of the B/C type in order to improve the rear field of vision, and it had a new sliding system called a Bubble Canopy. The first model did not have any dorsal fillet in the front of the vertical tail, but it was installed as the production stability was improved.

Hasegawa is a prolific model company based in Shizuoka, Japan.

The box art shows a P-51D flying above the clouds. It is overall bare metal with black and white invasion stripes around the wings and rear of the fuselage.
It has a black anti-glare panel in front of the windshield, a blue spinner. The rudder has a blue top and a white bottom. There is a yellow circle with a horizontal bar across it on the upper blue section.

There is the name Lt. J.E. Young on the cockpit coaming and below it is a character of Bugs Bunny holding a blunderbuss rifle and the black word "Hay".
On the side of the nose there is "Jumpin Jacques" in blue lettering. It has a black serial no. on the white bottom of the rudder of 464076.

One side panel of the box says the kit does not include cement or paint in multiple languages, including English, over Hasegawa's telephone number and street address in Shizuoka, Japan. Kit was made in Japan.
​The other side panel gives the length of the model as 205mm (8") and the width is 236mm (9 1/4"). There are 118 parts in the kit. This is followed by a color photo of a side view of the model made up in the box art scheme and the copyright date of 1991 and MADE IN JAPAN by Hasegawa.
WHAT'S IN THE BOX:

The first instruction sheet consists of a single sheet that accordion-folds out into 8 pages in 9" x 6" page format.

Page 1 begins with a black and white photo of the model made up in the box art scheme, over the history of the P-51D in Japanese, English, German, French, Italian, Dutch and Chinese.

Page 2 begins with warnings to not use glue or paint near flames etc., in the 7 languages, over a suggested paint color listing to use to complete the model.

Page 5 & 6 is the marking and painting instructions. Three 4-views are shown:
1. The box art scheme (already described above). It is with the 3rd Fighter Squadron, 3rd Fighter Group.

2. A P-51D with the 387th Fighter Squadron, 352nd Fighter Group. It is overall bare-metal with a blue nose and anti-glare panel. Fuselage code is black HO star. There is a black M on the rudder above serial no.. 414151.

3. A P-51D with the 353rd Fighter Squadron, 354th Fighter Group. It is overall bare-metal with a yellow spinner and an eagle in flight on the nose, followed by 20 1/2 victory marks over the Luftwaffe under the cockpit. 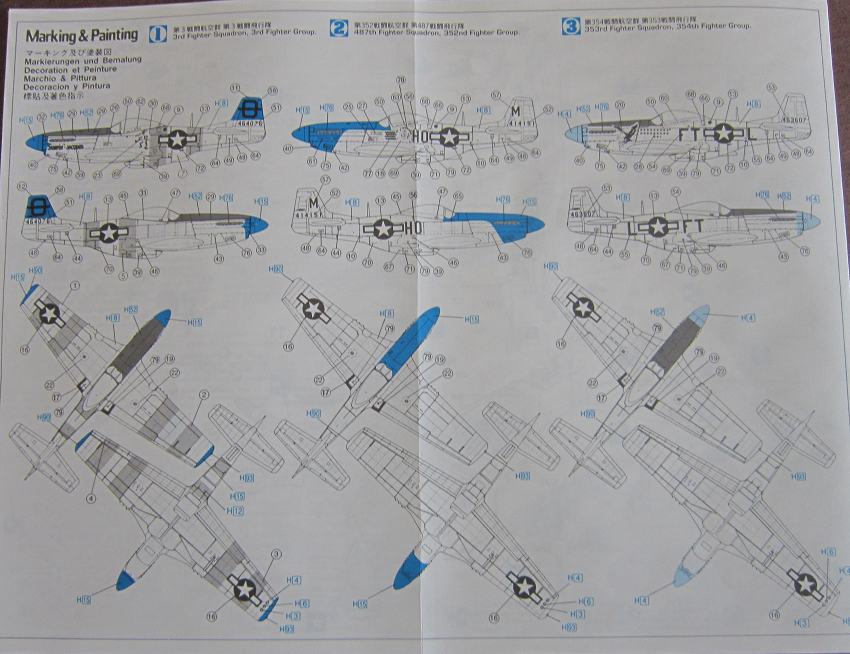 ​Page 8 of the instructions has the decal application instructions, over the parts trees illustrations in the 7 languages.

The bottom of the page has Hasegawa's telephone number, address in Shizuoka, Japan, PRINTED IN JAPAN and the copyright date of 1991.

The second instruction sheet is a single-sheet, printed on one side in 18" x 6" format, folded in the center to fit the box.

It has marking and painting instructions for the 2nd decal sheet as three 4-views:

1. A P-51D with the 336th Fighter Squadron, 4th Fighter Group. It is olive drab above a silver undercarriage. The fuselage code is white G4 star A. It has a reclining nude gal on the side of the nose with "Passion Wagon" below her in yellow. There is a black serial no. on the rudder of 413410. It has 4 victory marks shown below the cockpit. However, these are not on the decal sheet.

2. A P-51D of the 362nd Fighter Squadron, 357th Fighter Group. It is bare-metal with invasion stripes below the rear of the fuselage and around the wings and elevators. It has a black fuselage code B star VF and a black band around the rudder with black serial no. 413317 below it.There is a character of Donald Duck on the side of the nose. It has a red spinner and black anti-glare panel in front of the windshield. There are 7 victory over the Luftwaffe marks below the cockpit.

3. A P-51D with the 375th Fighter Squadron, 361st Fighter Group. It is olive drab above a silver undercarriage, with a yellow nose and spinner. it has black and white invasion stripes under the rear of the fuselage. The black fuselage code is C star E2. It has a black serial no. 413410 on the rudder and black "Lou IV" on the side of the nose. 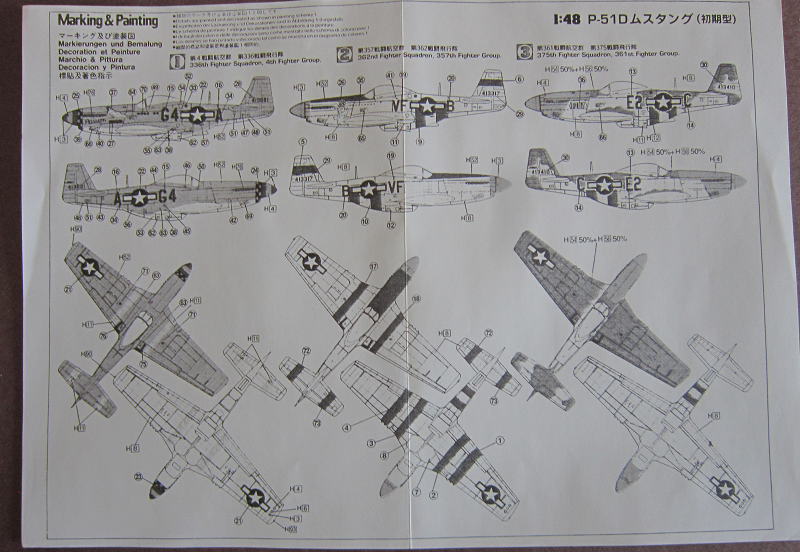 The third instruction sheet is printed on one side in color on slick-coated paper. It has a 4-view of the box art scheme (already described above), over a list of 10 different boxing of kits of Bf-109's (WOW...that's a lot). Hasegawa's address appears again. 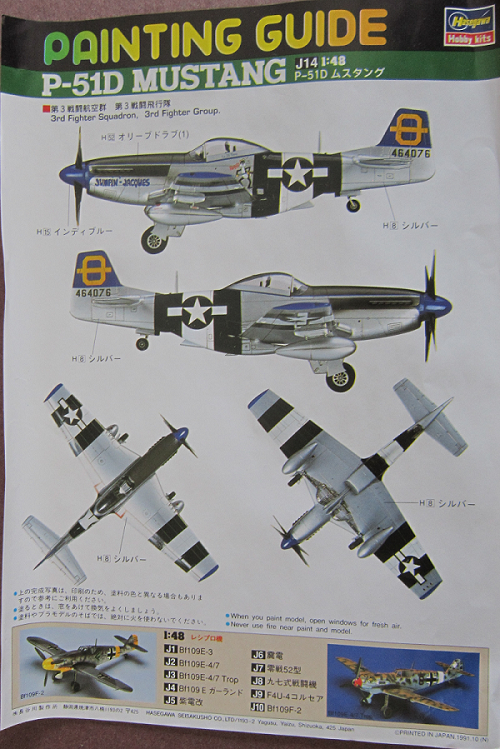 ​Trees are alphabetized and illustrated in the instructions and have part number tabs next to the parts on them.

Light-gray letter A tree holds: fuselage, seat and backrest, spinner, cockpit tub and side consoles, radiator, air intake, dashboard etc. (28 parts) One part is blued-out in the parts trees illustrations as being excess and not needed to complete the model. 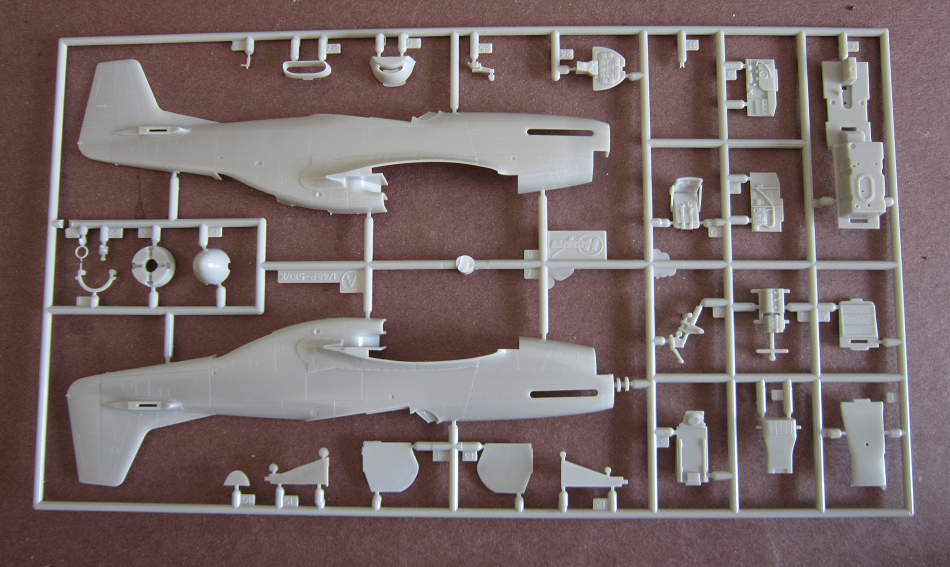 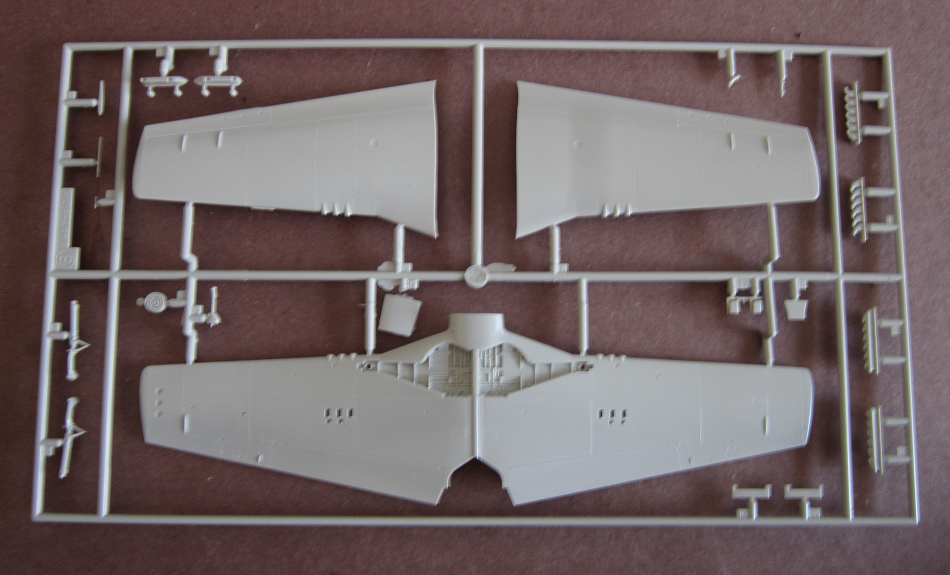 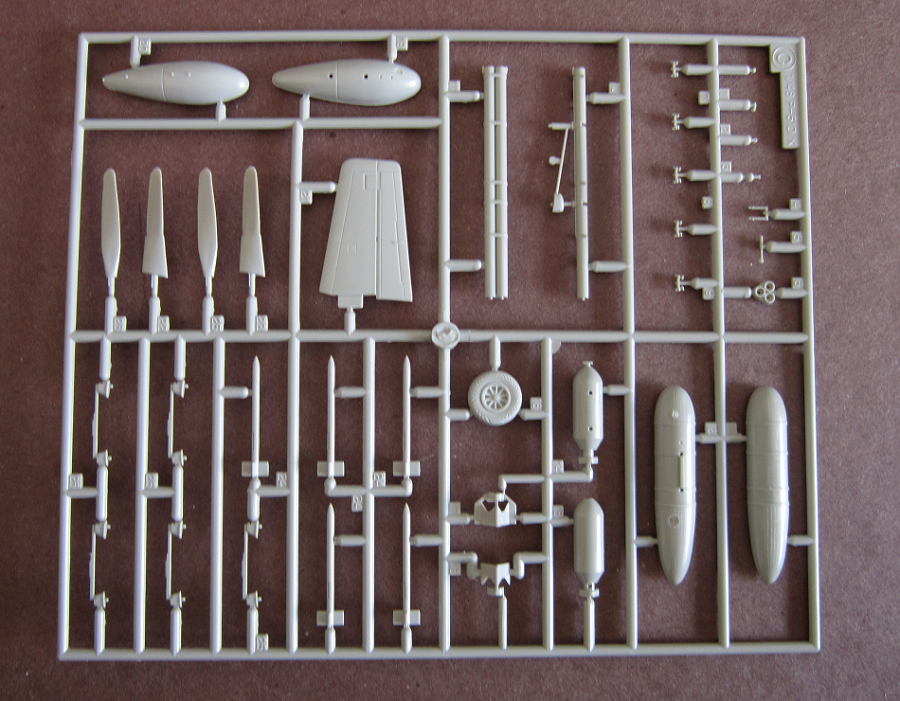 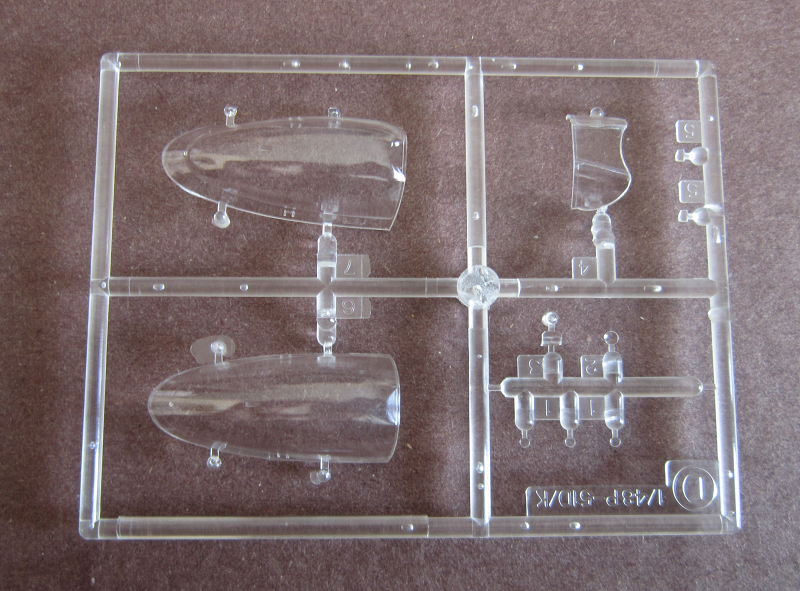 ​The kit has very nicely engraved panel lines and many schemes with the 2 decal sheets provided. There is no pilot figure in the kit and flaps are all molded solid.