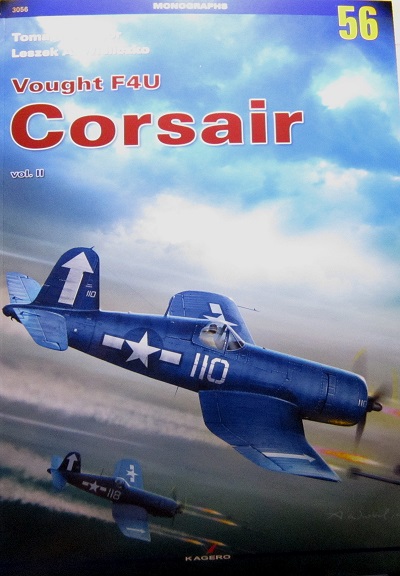 The Chance Vought F4U Corsair was an American fighter aircraft that saw service primarily in World War II and the Korean War. Demand for the aircraft soon overwhelmed Vought's manufacturing capability, resulting in production by Goodyear and Brewster: Goodyear-built Corsairs were designated FG and Brewster-built aircraft F3A. From the first prototype delivery to the U.S. Navy in 1940, to final delivery in 1953 to the French, 12,571 F4U Corsairs were manufactured by Vought in 16 separate models, in the longest production run of any piston-engined fighter in U.S. history (1942–53).

The Corsair was designed as a carrier-based aircraft. However its difficult carrier landing performance rendered the Corsair unsuitable for Navy use until the carrier landing issues were overcome when used by the British Fleet Air Arm. The Corsair thus came to and retained prominence in its area of greatest deployment: land based use by the U.S. Marines.[5] The role of the dominant U.S. carrier based fighter in the second part of the war was thus filled by the Grumman F6F Hellcat, powered by the same Double Wasp engine first flown on the Corsair's first prototype in 1940.[6] The Corsair served to a lesser degree in the U.S. Navy. As well as the U.S. and British use the Corsair was also used by the Royal New Zealand Air Force, the French Navy Aéronavale and other, smaller, air forces until the 1960s. Some Japanese pilots regarded it as the most formidable American fighter of World War II,[7] and the U.S. Navy counted an 11:1 kill ratio with the F4U Corsair.

After the carrier landing issues had been tackled it quickly became the most capable carrier-based fighter-bomber of World War II. The Corsair served almost exclusively as a fighter-bomber throughout the Korean War and during the French colonial wars in Indochina and Algeria

Kagero is based in Lublin Poland. There books are printed in English.

The cover art shows two F4U-1B’s attacking with rockets. They are both with VF-84 stationed aboard U.S.S. Bunker Hill. The one in the foreground is flown by LT(jg) William L. Gerner, February 1945. It is in overall dark navy blue with a black propeller. A small white number 110 is on the sides of the cowling and again in white and larger under the cockpit sides, followed by a white star and bars insignia and a large white arrow pointing upward on the tail with a small white 110 to the left of it. The second aircraft is similarly painted and marked with white number 118.

1 line drawing of the F4U with illustrations of some bombs.

2 line drawings of the Corsair Mk. I

There are 5 color 2-views on the rear pages and the back of the book’s cover.

1.     A F4U-1A no. 012 (BuNo unknown) “Winnie the Poo-Too”, flown by the CO of VMF321 “Hells Angels”, Maj. Edmond F. Overend, Guam, the Marianas, October 1944. It is in dark navy blue above grey undersides. Has the white “Winnie the Poo-Too” on the sides of the cowling, the "Hell's Angels" logo under the windscreen on the sides, the major’s name in white cursive above a stenciled number 012 under the cockpit, followed by a white star and bars.

2.     A F4U-1B no. 600 (BuNo unknown) of VMF-122, flown by Lt. Donald R. Wilson, Peleliu, Palau Islands, 1945. It is in overall dark navy blue with a white 600 under the cockpit, followed by a white star and bars. The forward part of the rudder is painted white. On the left side of the cowling is a color painting of a nude gal who is supposed to be Miss Lace a cartoon character by Milton Caniff.

3.     A F4U-1A no. 815 (BuNo unknown) “Brat III” of VMF-225, flown by Capt. Dean S.Harley Jr., Guam, the Marianas, December 1944. It is in dark navy blue above grey underside, with a white cowling. Panels are lined with tape in front of the windscreen. The white number 815 is stenciled under the cockpit, followed by a white star and bars. On the left side under the windscreen is Brat III in white cursive lettering.

4.     A FG-1A no. 993 9 (BuNo 13993) “Virgin Jackie” of VMF-222, Samar, Philippines, autumn 1944. It is in overall dark navy blue over grey underside. The Navy Sea Bee logo is on the right side of the cowling and a naked gal with the red lettering Virgin Jackie is on the left side of the cowling. The white number 993 is stenciled below the cockpit and followed by a white star and bars.

This is a very neat book about the corsair. It will be of great interest to both modelers and aircraft enthusiasts.

I want to thank Kagero and the folks at Casemate who sent me this review sample.


Casemate is the U.S. distributor of Kagero books.