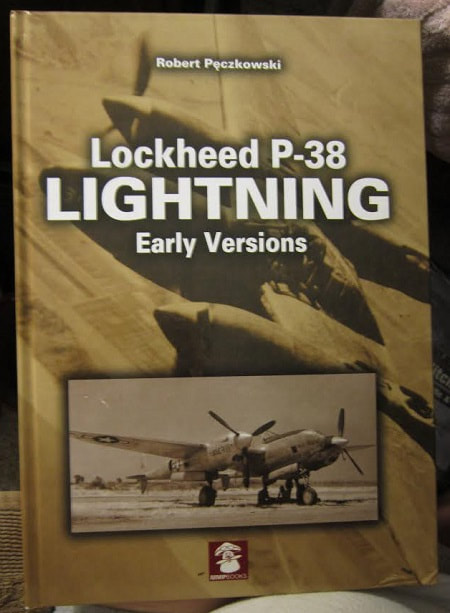 MSRP: $39.00
Lockheed designed the P-38 in response to a February 1937 specification from the United States Army Air Corps (USAAC).
The Lockheed design staff was headed by Hall L. Hibbard. The second designer was the soon-to-be famous Clarence L. "Kelly" Johnson. They were considering many different designs, but Hibbard and Johnson finally decided on a two-boom design with each boom extending aft of the engine, the pilot sitting in an enclosed cockpit in a central nacelle.
The new 1150 hp Allison V-1710C twelve-cylinder liquid-cooled engine with an exhaust-driven turbo-super-charger was used. one mounted on each boom. The central nacelle contained a forward-firing armament of one cannon and four 0.50-in machine guns.

One big advantage of the twin-boom layout was the possibility of installing the armament in the central nacelle, which allowing sighting of the parallel streams of fire up to the maximum range of 1000 yards, without syncronizing gear.

Tail surfaces consisted of a fin and rudder at the end of each boom and a horizontal tail plane and elevator between the booms. It was anticipatec that the twin fin and rudder tail assembly  would increase the effective aspect ratio of the tail plane by the endplate effect. Fowler flaps were also fitted.

The P-38 was the only American fighter aircraft in production throughout American involvement in the war, from Pearl Harbor to VJ Day. With its unusual twin-boom design, this was one of the most distinctive fighters of WW2, and saw action in all theatres of the war, being especially effective in the Pacific area.

The book describes the development of the early versions of this iconic warplane, with full technical details and many detail photos.

It is profusely illustrated with photos, including a comprehensive walk-around section showing all aspects of the airframe, and diagrams from official manuals. It includes 1/72 scale plans, and color profiles showing many of the colorful schemes applied to the P-38 by its users.

Musroom Model Publications (MMP) is based in the UK. All their books are printed by their associate Stratus Publications in Sandomierz, Poland in the English language. Stratus also does their own line of books in both English and Polish.

The cover shows a black and white photo of a P-38 with "Timber" on a engine cowling and "Rose Marie" on the nose, over a photo of a P-38 in flight over a orange background.

The back cover of the book has a color cover art for the second volume on the P-38 "Lockheed P-38J-L Lightning".

There are 2 conceptual drawings.

There is a color portrait painting of Richard I. Bong, P-38 ace included.

"Mackie", "Pearl III", "Miss Virginia" with 2 Jap kill marks, a naked female angel on one side of nose and a gal in a Hawaiian bathing suit on the other side of the nose, "Porky II" with 8 Jap kills and a full page color illustration of this aircraft, "Pluto" dog, "Thoughts of Midnight" and a gal in bathing suit, "Skylark IV" with a bird standing on a cloud and firing a bow and arrow, "Pudgy", "Jeanne 80", "Stinky", "Glacier Girl", "Elsie", "Jinx", "Earthquake McGoon" and "Babe".

There are 33 color walk around photos of a P-38F, but it is not said where this aircraft is.

There are 60 tech manual illustrations.

Four color photos of the instrument panel and 4 black and white ones.

A color illustration of the instrument panel with names of all the parts.

Final item in the book is the bibliography.

This is a very therough book on the early P-38 versions.

Highly recommended to both modelers and aviation enthusiasts.

All MMP titles can be seen listed on Casemates site at:
www.casematepublishing.com
or
http://www.mmpbooks.biz