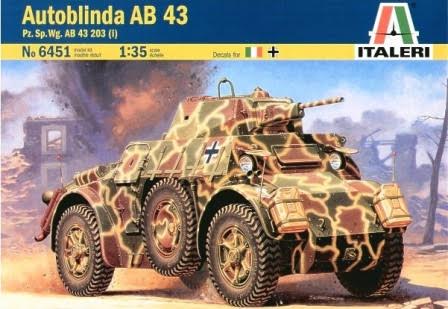 The AB 43 armored car is an evolution from the previous AB 40 and 41 models. Equipped with a new larger turret, its main weapon was the 20 mm calibre Breda 35, with a co-axial BMM machine gun.

Unfortunately, the AB 43 never entered into service with the Italian army as its production was only started in 1944 under the control of the German forces, which had occupied the Italian industry following the armistice in September 1943.

Thyese vehicles were distributed to many German units operating at the Italian front. They were used particularly for controls and by the police in the northern regions, which was subject to great partisan resistance. The examples that survived were used by the police to maintain public order after the war.
​THE KIT:

Italeri is an older prolific model company based in Italy. They make all manner of different model subjects in the popular scales.

The box art shows a AB 43 passing some destroyed buildings, one of which is on fire, in the background. The AB 43 is in a base of panzer olivegun (olive green) with a spiderweb of panzer dunklegelb (earth yellow). It carries German crosses on the sides of the hull and no other markings.

On side panel provides 2 different web addresses and a street address in Balogna, Italy for Italeri. This is followed by a one-paragraph history of the AB 43 in 6 languages, including Engish. The paragraphs are marked with color illustrations of the flags of the countries that speak these languages.

The other side panel begins by repeating the addresse, then a copyright date of 2006, a listing of Model Master brand paints and 2 color photos of the model made up in the box art scheme.

The kit contains 5 tan parts trees, 2 black vynil trees of 3 tires each, the decal sheet, the instructions and a single sheet of schemes for 4 differnt marking and painting patterns.

The instructions consist of a single sheet that accordion-folds out into 10 pages in 7 3/4" x 13" page format.

The top of page 3 has an illustration of the 5th tan parts tree, above the first assembly step.
Page 3 through 9 give a balance of a grand total of 14 assembly steps.

Page 10 has IMPORTANT INFORMATION CONCERNING THIS KIT in 20 languages, including English. A after-market assistance coupon is at the bottom of the page. 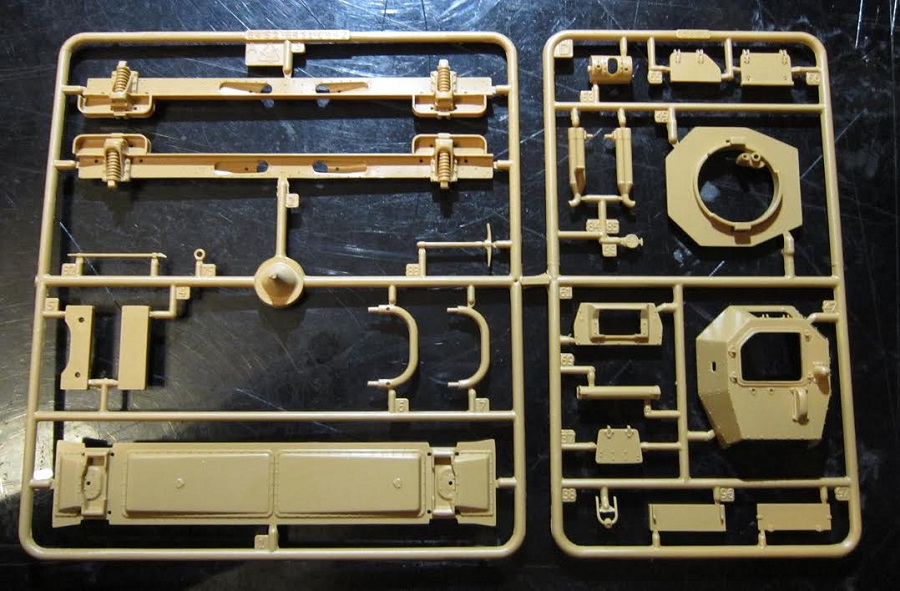 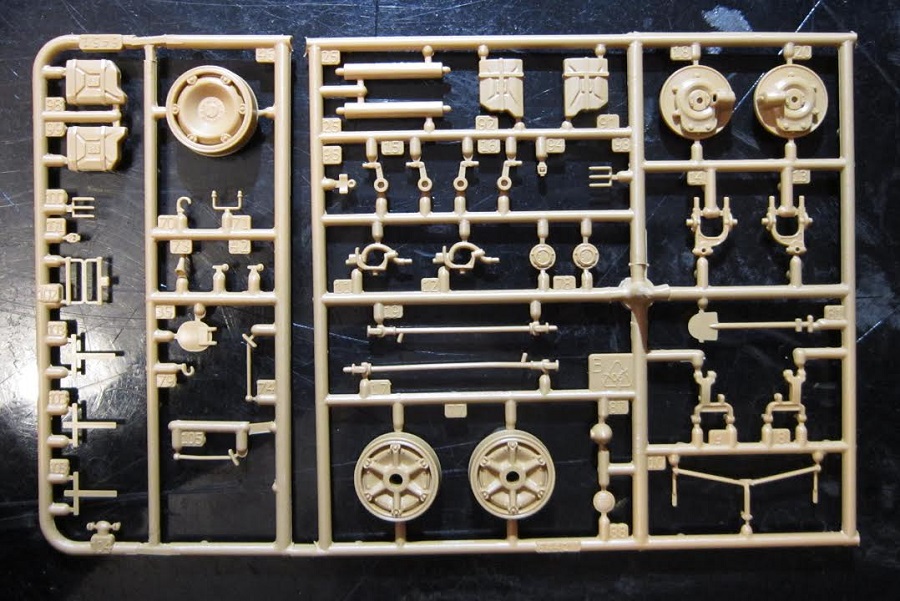 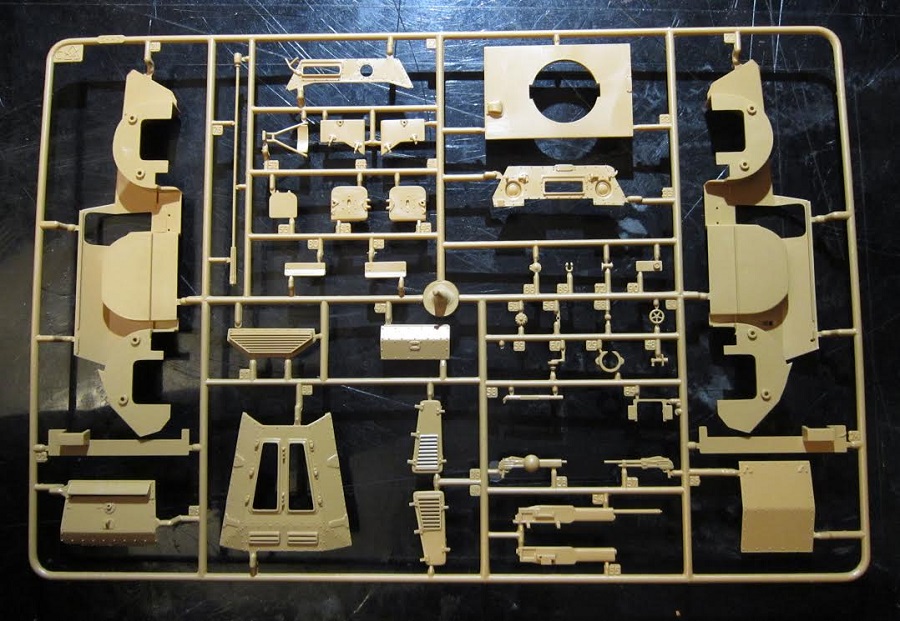 ​There are no clear parts, crew figures or internal details in the kit. All the trees are not cello bagged.

The two trees of black vinyl tires each hold 3 tires each. 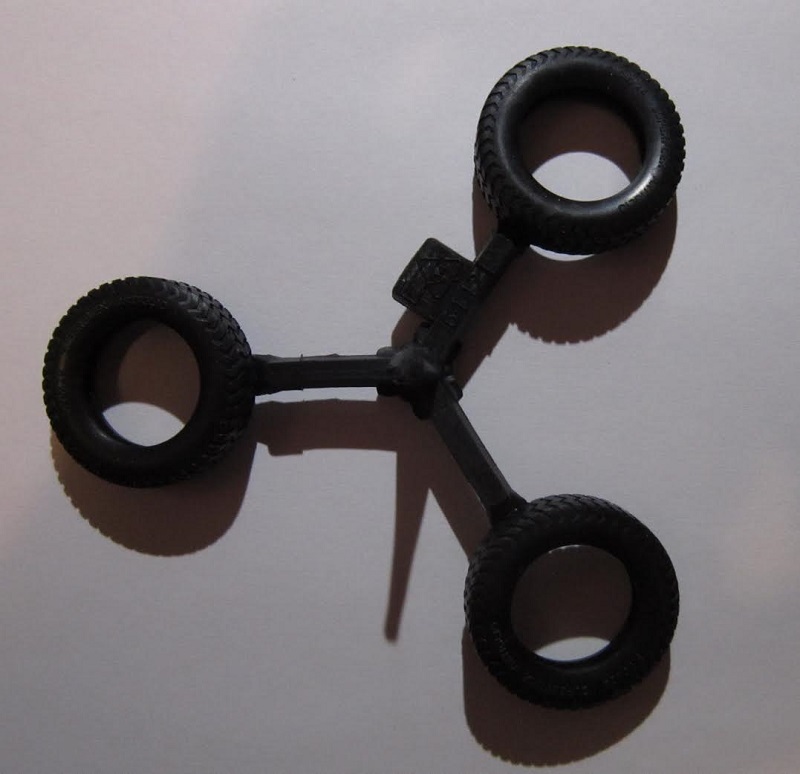 ​The decal sheet and the single full color sheet of the color and marking schemes completes the kits contents.

The 4 schemes are done as 4-views. 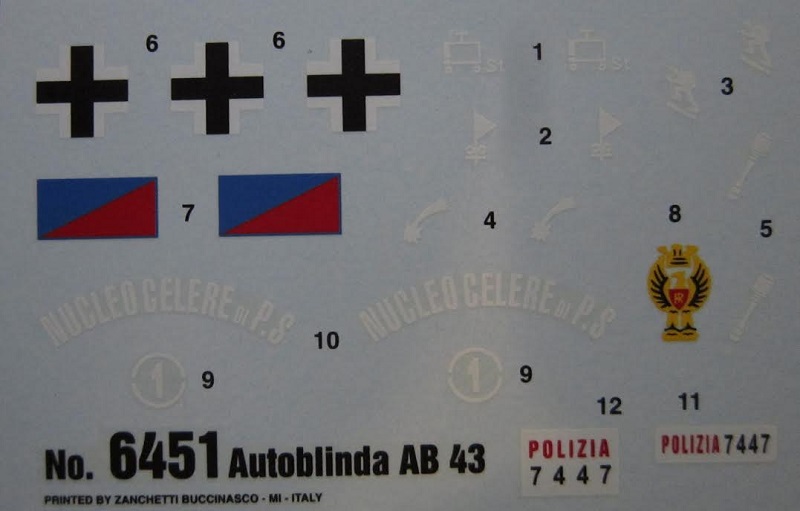 This is salty looking armored car. The two sides of the hull are held together with bars inside. It would be very difficulty to put any interior details inside.

Doors are seperate, but if you leave them open you would see nothing but these bars inside.
It has great external detail though. Highly recommended.
Kit courtesy of my wallet.