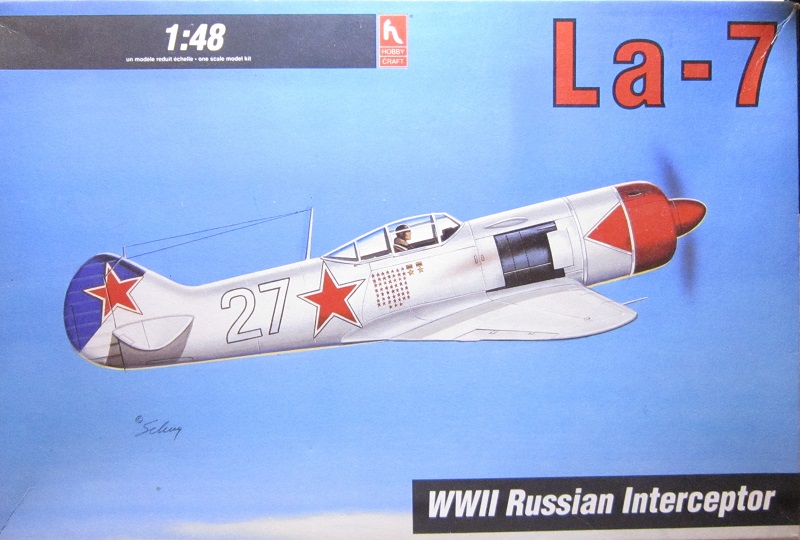 The Lavochkin La-7 was a Soviet fighter aircraft of WWII. It was a development and refinement of the Lavochkin La-5, and the last of a family of aircraft that had began with the LaGG-1 in 1938.

By 1943, the La-5 had become the mainstay of the Soviet Air Force. Yet both it’s head designer, Semyon Lavochkin, as well as the engineers at TsAGI (Central Aerohydrodynamics Institute) felt that it could be improved upon. The LaGG-1 had been designed at a time when it was considered necessary to conserve strategic materials such as aircraft alloys, and had a structure built almost entirely of plywood. With Soviet stategists now confident that supplies of these alloys were unlikely to be a problem, Lavochkin began replacing large parts of the airframe (including the wing spars) with alloy components. Various other streamlining changes were made as well, increasing performance further, The prototype, internally designated La-120 by Lavochkin, flew in November, and was quickly ut into production, entering service the following spring.

The La-7 earned itself a superb combat record by the end of the war, and was flown by the top two Soviet aces in the conflict. One of these was Ivan Nikitovich Kozhedub. Turning a full circle took 19-21 seconds. The aircraft was also used as a test bed to explore advanced propulsion systems, including a tail-mounted rocket engine (La-7R). Two under-wing pulse jets were tested on the La-7D, and two under-wing ramjets on the La-7S. None of those variants proved worth pursuing, and turbojet technology quickly overtook them.

The La-7 was the only Soviet fighter to shoot down a Messerschmitt Me-262 jet. This was done by Ivan Nikitovich Kozhedub on one occasion over Germany on February 15, 1945. Total production of the La-7 amounted to 5,753 aircraft, including a number of La-7UTI trainers. Those aircraft still in service after the end of the war were given the NATO reporting name “Fin”. The follow-up model, La-9 – despite it’s outward similarity was a complete reworking of the design.

The kit came in a tray and lid type box. The box art shows a La-7 flying above the clouds in a bright blue sky. It is in the scheme of bare metal (FS 17178) above a light blue undercarriage (FS 35550). It has a red cowling with a red triangle behind it. The propeller spinner is red too. The exhaust ramps are black. The tip of the tail is dark blue (FS 15200) at a slant. There is a red star on the tail outlined in white. There are 52 small red star kill marks below the cockpit with 2 illustrations of award medals next to them, that are atop a green laurel branch. The fuselage carries a large red star outlined in white with the white number 27 outlined in black just behind this star. There are larger red stars, without the white outlining under the wings only. This is the markings of Ivan Kozhedub’s aircraft. This is one of the schemes offered on the kit’s decal sheet.

Inside the box are three medium grey trees of parts, at tree of clear parts, the decal sheet and instructions. There is also a pre-paid postcard that you can mail to Hobby Craft with any suggestions you may have for future kits. Another card is inserted to send with $3.00 for their catalog and a slip is in there that says the kit is not for children under 3 years because of small parts that may create a possible choking hazard (in 9 languages, including English).

Page 1 begins with a black and white repeat of the box art, followed by the history of the La-7. This is very abbreviated and only says that the aircraft was derived from the La-5 and Kozhedub flew it and was the top Soviet ace with 62 confirmed victories. (in 5 languages, including English). The bottom of the page has international assembly symbol explanations and Hobby Craft’s address.

Page 2 begins with “Read before you begin” general instructions, followed by the first 2 assembly steps.

Pages 3 and 4 give the balance of a total of 6 assembly steps.

A La-7 flown by Kozhedub in 1944. This is the box art scheme, already described above.

A La-7 flown by Kozhedub, one year later in 1945. This may be the same aircraft now repainted. It still has the red propeller spinner, cowl and triangle behind the cowl. The upper surfaces are green (FS 34097). The undercarriage is still light blue (FS 35550). The tail still has the rudder tip as dark blue (FS 15200) at an angle. The Soviet stars are the same as before, with the white 27 on the fuselage also the same. What has changed in the markings is that the little red star kill marks now have illustrations of 3 Soviet medals next to them vs the 2 that were on the aircraft in 1944. The green laurel branches are no longer in evidence

A La-7 with the post-war Czech Air Force. It is in a wave pattern of dark green (FS 34099) and green (FS 34097) above and light blue (FS 35550) below. It has the fuselage number 17 in white outlined in black and a red lightning bolt on the sides of the cowling. The national marking of a red, white and blue pie-sliced circle is on the rudder and above and below the wings. The propeller spinner is red. The Czech insignia on the decal sheet have to be assembled, pie-slice by pie-slice onto white circles. This could turn into a disaster easily trying to do that. Bad move Hobby Craft!!

Page 6 begins with seven rectangles that are differently shaded to indicate different colors and labeled with FS numbers (Federal Standard). Not everybody has a FS book to be able to tell what these colors are. Fortunately, they can be looked up on the internet. Hobby Craft should have just said what the darn colors were. Below this is a couple illustrations of the tops and bottoms of the La-7 schemes shown on the previous page.

There are no parts tree illustrations in the instructions. Trees are not alphabetized, like we usually see done in kits, but part numbers are on the trees next to the parts. So, care will have to be taken to get the right parts for assemblies.

The first large medium gray parts tree holds: the cockpit floor and bulkheads, instrument panel, cockpit side panels, pilot seat and it’s back armor, rear cockpit shelf, an inaccurate joy stick (more on this later), individual propeller blades, propeller center hub, propeller spinner, engine cooling fan, cowling, air scoop, horizontal tail surfaces and rudder, landing gear legs, main wheels, tail wheel, landing gear doors and actuator arms and pitot tube. (46 parts). Except for one end of this tree, it is identical to the one in Hobby Craft’s kit of the La-5. The new parts on that end are for the air intake that is further back under the belly of the La-7 than the smaller one that is under the nose of the La-5. 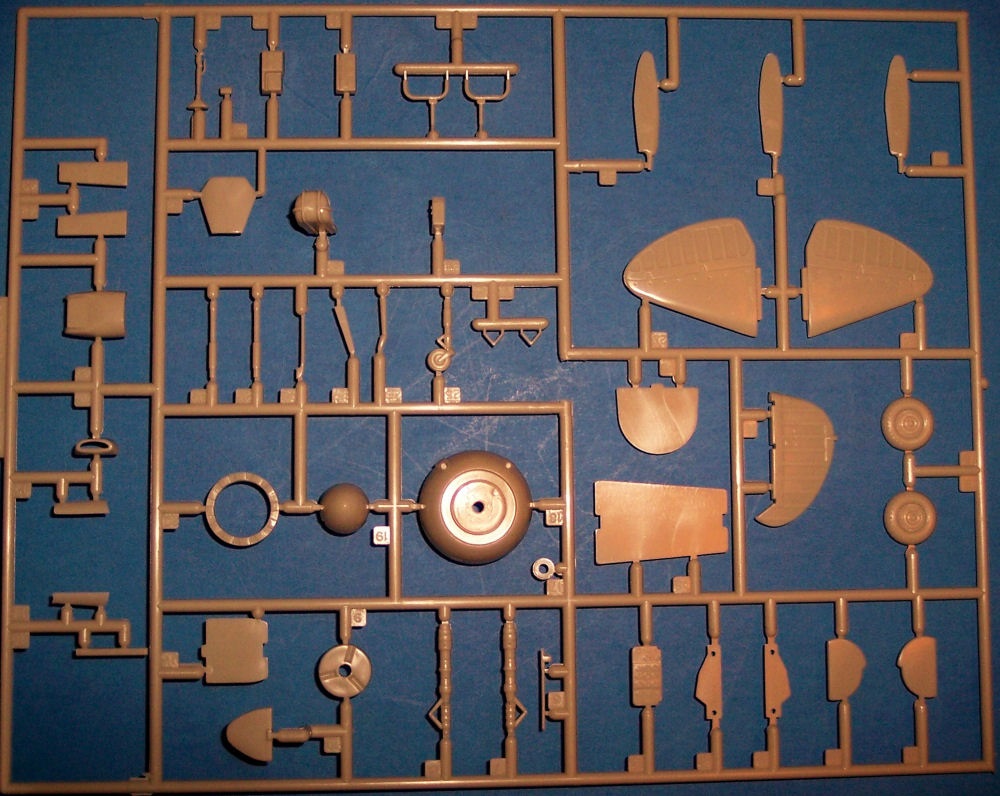 The second medium gray parts tree holds the fuselage halves and bombs with their shackles. This tree is identical to the one in Hobby Craft’s La-5 kit. (8 parts) 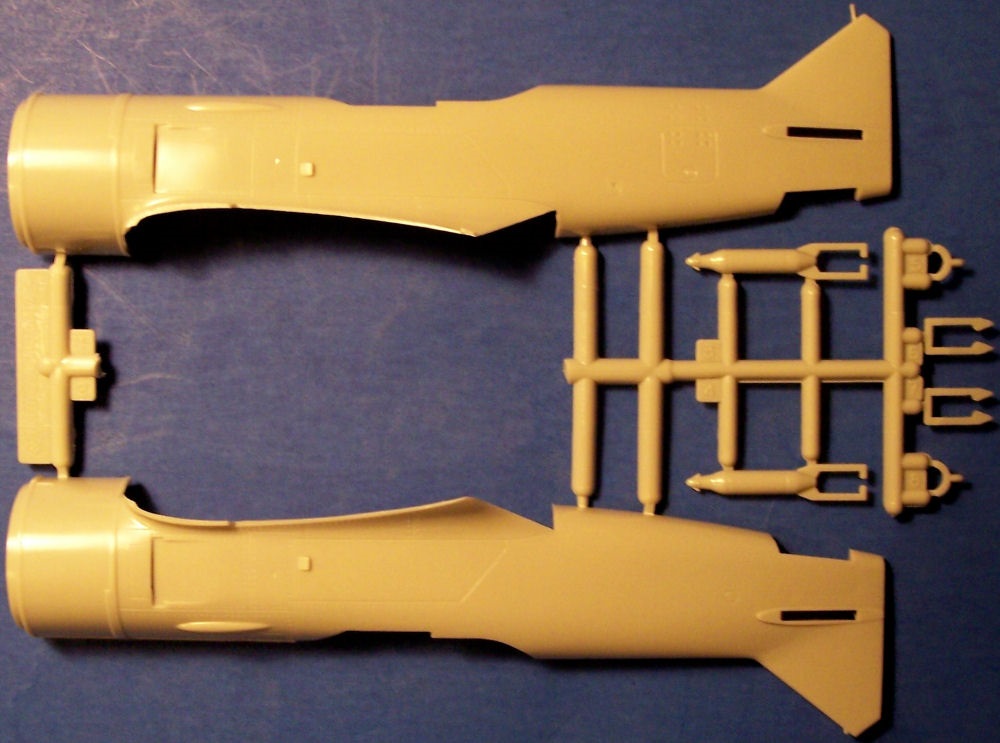 The third medium gray tree holds the wing halves. The lower wing is full span. This tree too is identical to the one in Hobby Craft’s La-5 kit. 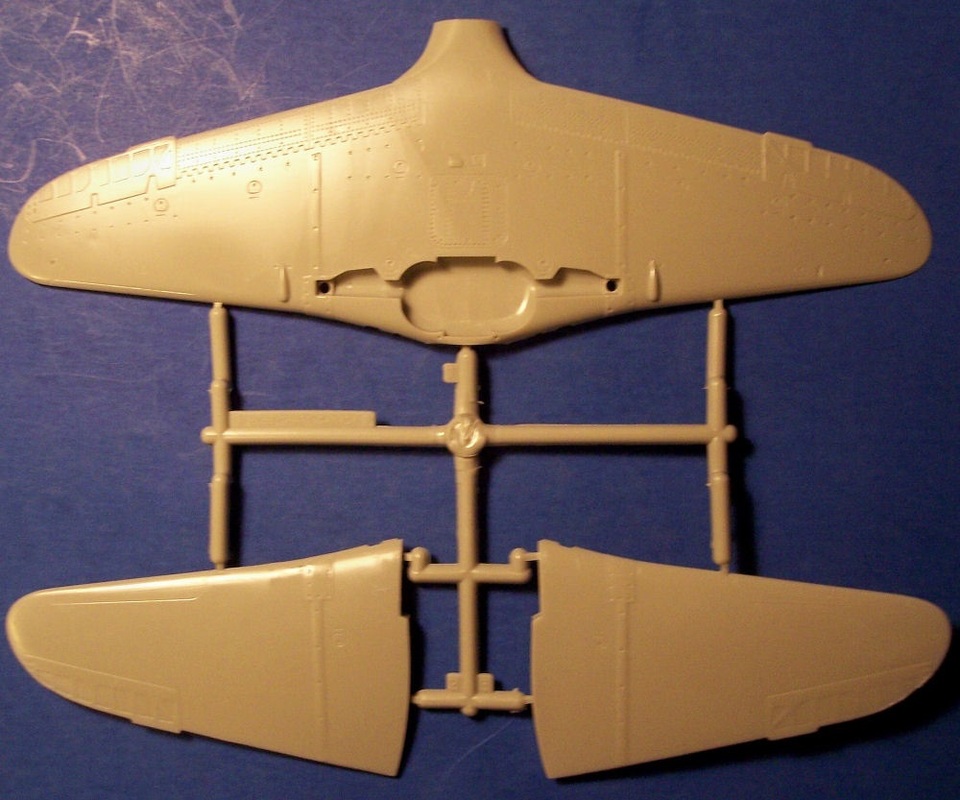 The single clear cockpit canopy part is next. Yep! You guessed it! Same as the La-5 kit. Nothing like getting all the miles you can out of molds…right?

Now, about that erroneous joystick in the kit. It is molded as a staff with a pistol grip at the top that has a lever behind it. The La-7, according to some blue prints sent to me by a Russian pen pal years ago, has a joystick that is a staff with an open oval at the top that has buttons and levers in the center of it. I believe that the buttons are triggers for the guns? This configuration is similar to the joystick found in British Spitfires.

Parts have engraved panel lines. Flaps and rudder and cockpit canopy are molded solid. So, it would take some surgery to re-position the flaps and rudder or open the canopy.

The decal sheet, already described above completes the kit’s contents. 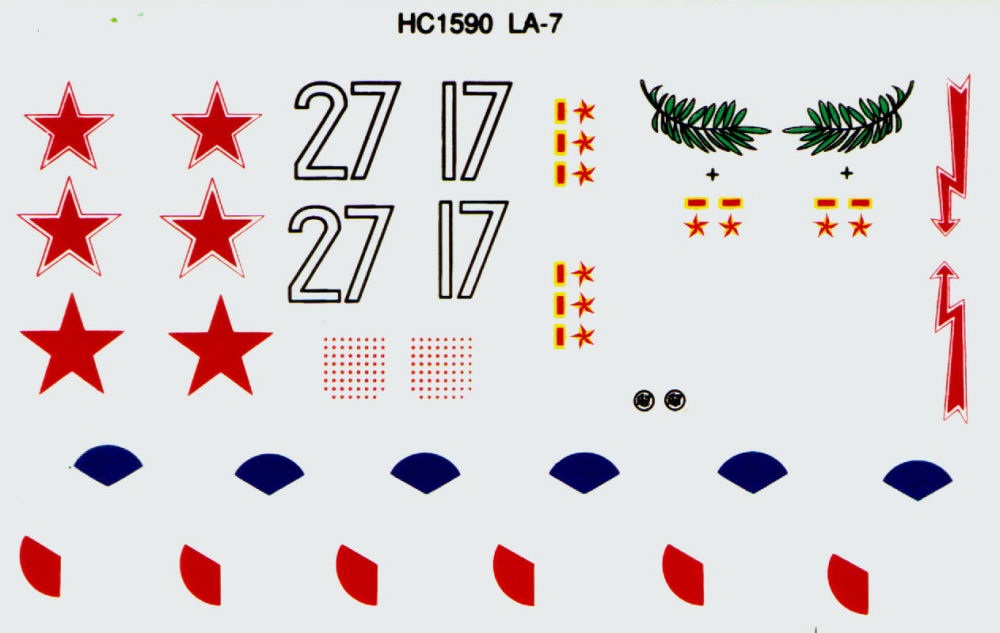 I also purchased 3 different brass PE frets designed for this kit. The first one is by PHOTOCUT brand.  It has a few cockpit interior parts and the grill for the air intake. The other two sets are by EDUARD. One is the wing flaps (SET NO. 48-014) and the other is interior details (set no. 48-012.

The kit was courtesy of my wallet.