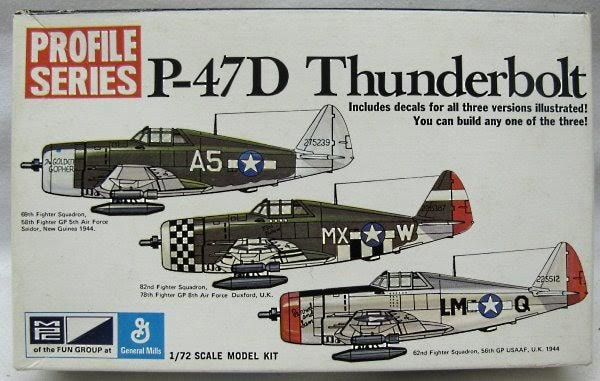 The P-47 made significant contributions to the outcome of WWII after overcoming early troubles and critics who were horrified at the mammoth proportion of the corpulent fighter.
The "Jug" was eventually the plane that most of the leading American aces made their reputation in; including Lt. Col. F.S. Gabreski (31 victories), Cpt. R.S. Johnson (21 victories) and Col. H. Zemke (20 victories).

Equipped with drop tanks, Thunderbolt's were escorting bombing missions in early 1943 that ranged as far as Berlin.

MPC was the distributor of Airfix kits in the US.

Airfix is a prolific older model company that manufactures all manner of model subjects in the popular scales.

This kit came in a tray and lid type box that was  shrink-wrapped.

It is one of the MPC PROFILE SERIES of kits, that generally gave you 3 marking options. These 3 options are illustrated on the box art against an all white background.

1. A P-47D that is olive drab above white undersides and most of the cowling bottom with the name THE GOLDEN GOPHER on that area. the rudder is white also. It carries the white fuselage number A5 (star with bars) and a serial no. 275239 on the rudder sides.

2. A P-47D that is olive drab above gray undersides. It has a black and white checkered cowling with an all white nose. The rear of the fuselage has black and white D-Day Invasion stripes below it. The white fuselage code is MX (star with bars) W. There is a white horizontal stripe across the rudder. Below that stripe is a yellow serial no. 226387.

3. A P-47D that is overall white with a olive-drab anti-glare panel and a red cowling and rudder flap. It says PENROD AND SAM on the cowling and carries the fuselage code in black of LM (star with bars) G. The black serial no. on the rudder is 225512. There are 27 victory marks under the cockpit.

One side panel has the history of the Thunderbolt next to a repeat of the box art. Cement is not included and the kit was made and litho in the U.S.A.

The other side panel has full color illustrations of 5 other aircraft kits that MPC markets in the Profile Series:

No kit numbers for these 5 is shown and I assume they are all 1/72nd scale.

Below these box arts it says "Model Products, a division of General Mills fun group Inc. Mount Clemens, Michigan 48043.
WHAT'S IN THE BOX: 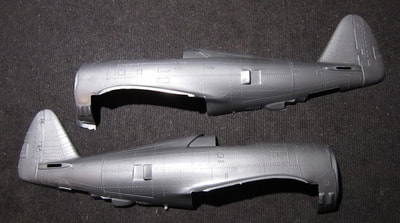 The clear tree completes the parts in the kit.

All the parts are in a sealed cello bag with a small slip that says MADE IN ENGLAND.

The instructions consist of a single sheet folded in the center to create 4 pages in 8" x 9" page contact, folded again to fit the box.

Page 1 begins with MPC of General Mills Fun Group Inc's street address in Mt. Clemens, MI above a black and white repeat of the box art, followed by IMPORTANT: READ THIS FIRST instruction and the history of the Thunderbolt.

The bottom of page 3 gives a 3-view for the scheme of THE GOLDEN GOPHER.

Page 4 gives 3-views for doing the schemes for the checkerboard nosed P-47D and PENROD AND SAM.
​The first silver-gray tree holds: the propeller, bombs and engine cylinders (7 parts) 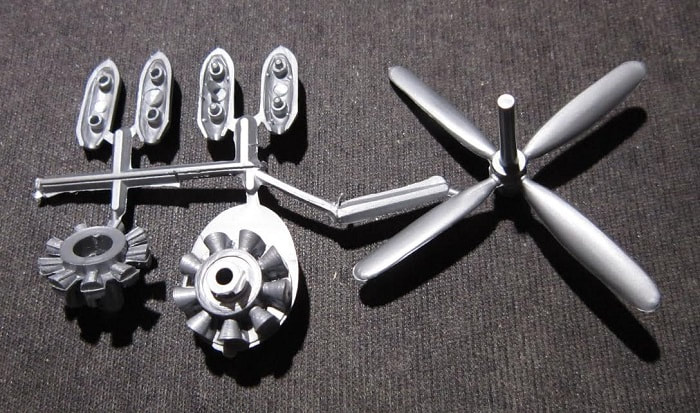 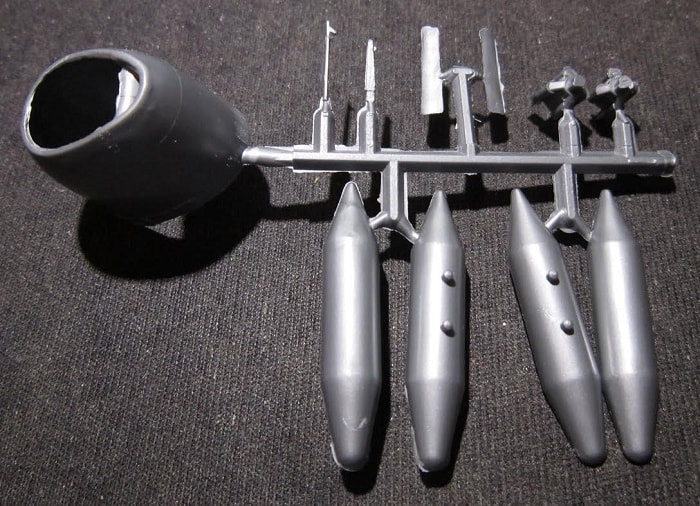 ​The third silver-gray tree holds: the landing gear legs and wheel covers, one half of the elevator etc. (9 parts) 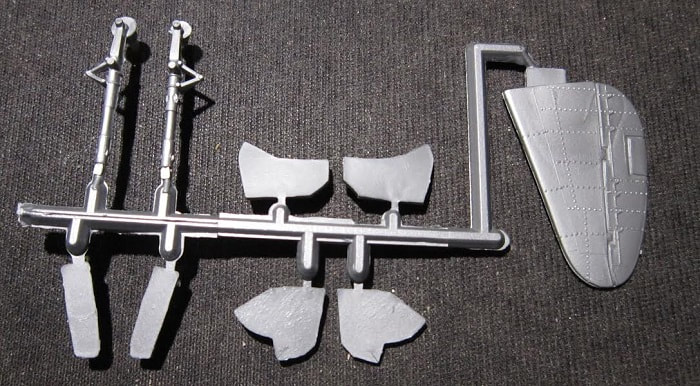 ​The fourth silver-gray tree holds: the other half of the elevator, the tail wheel, wing guns, pilot figure, pilot seat, main wheels and the propeller mount (9 parts)

The individual silver gray parts have already been mentioned above.

​
The clear tree holds 2 cockpit transparencies. Because of this the cockpit could be shown open.
However, control surfaces are all molded solid and the panel lines are of the raised variety.
There are no part number tabs next to the parts on the trees and no part trees illustrations in the instructions. This means extra work studying the assembly drawings to get the right parts for the build. Bad move MPC. 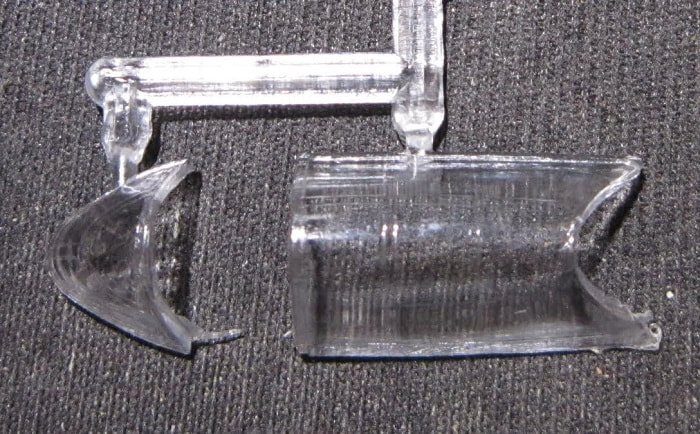 The decal sheet for the versions mentioned above.

​Except for the rather heavy raised rivet patterns for panel lines this kit is okay for as old as it is. Purists might want to remove these rivets and scribe in the panel lines. Also, the cockpit only contains the pilot seat and pilot. I needs a lot more detailing out.

Otherwise recommended to the average modeler.
​I bought my kit years ago at my local hobby shop and am more than willing to sell it for a decent offer.