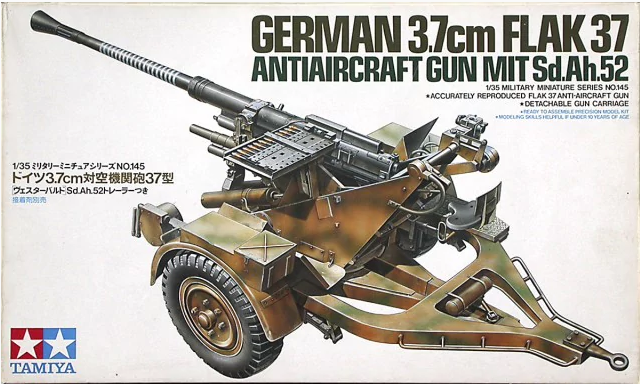 The 3.7 cm Flak 18/36/37/43 was a series of anti-aircraft cannon produced by Nazi Germany that saw widespread service in the Second World War.

The cannon was fully automatic and effective against aircraft flying at altitudes up to 4,200 m. The cannon was produced in both towed and self-propelled versions. Having a flexible doctrine, the Germans used their anti-aircraft pieces in ground support roles as well; 37 mm caliber guns were no exception to that.

This kit came in a shrink-wrapped end-opening type box.

The box art shows a Flak 37 posed against one of Tamiya's signature all-white backgrounds that they use for the majority of their box arts.

The gun is on a earth yellow cart and is panzer grey. It has 20 white kill marks around the barrel.

The box art says it is an accurately produced FLAK 37 anti-aircraft gun, with detachable gun carriage.

One side panel has color illustrations of a stick projectile Type 42, a stereo rangefinder EmRfm, 3.7cm armor-piercing rounds and 3.7cm high-explosive rounds. Followed by a paragraph all in Japanese and MADE IN JAPAN.

​The other side panel shows 2 color side views of the Flak 37. One is in a camouflage of scheme of dark yellow and red brown. The other one is overall Panzer grey in winter whitewash with the stick projectile mounted on the barrel. Another paragraph all in Japanese follows and the 1980 copyright date for the kit.

​The bottom of the box has a color 2-view of the gun showing it's top and side in dark yellow and dark green camouflage scheme on the carriage and panzer grey gun, with 3 white kill rings around the barrel.

Over a side view of the gun with an overall dark yellow carriage and panzer grey gun, again with the 3 kill rings around the barrel.

Below this is a color illustration of a wooden walled emplacement, aboard a German 8 ton semi-truck Sd.Kfz. 7/2 in a dark yellow and red bown wave pattern and an above view of the gun with shadow-like images of the 7 man gun crew. 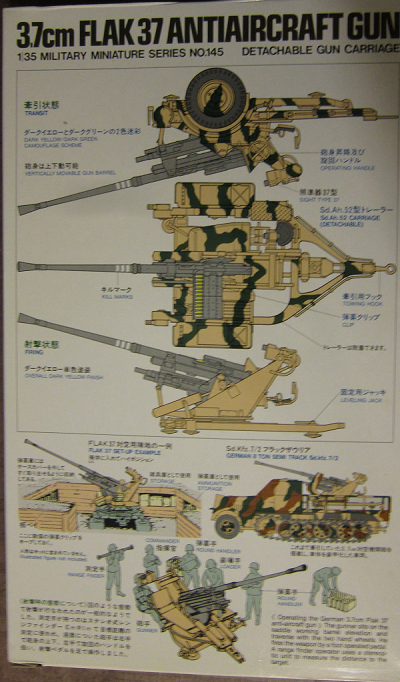 This kit contains 2 tan trees and the decal sheet in 2 sealed clear cello bags, the instructions and a color kit catalog.

The instructions consists of a single-sheet printed on both sides that is 7 1/2" x 20" folded 3 times along its length to fit the box.

The face side begins with a black and white photo of the model made up in the box art scheme shown off the carriage, over the history of the gun, painting and marking instructions showing the gun in the box art scheme, READ BEFORE ASSEMBLY INSTRUCTIONS, a list of recommended tools and paint colors to use, in English and Japanese. Over the first 2 assembly steps.

The reverse side gives a balance of a grand total of 7 assembly steps and Tamiya's street address in Shizuoka City, Japan in the 2 languages.

Trees are alphabetized, but not illustrated in the instructions. They do have part number tabs next to the parts on the trees. 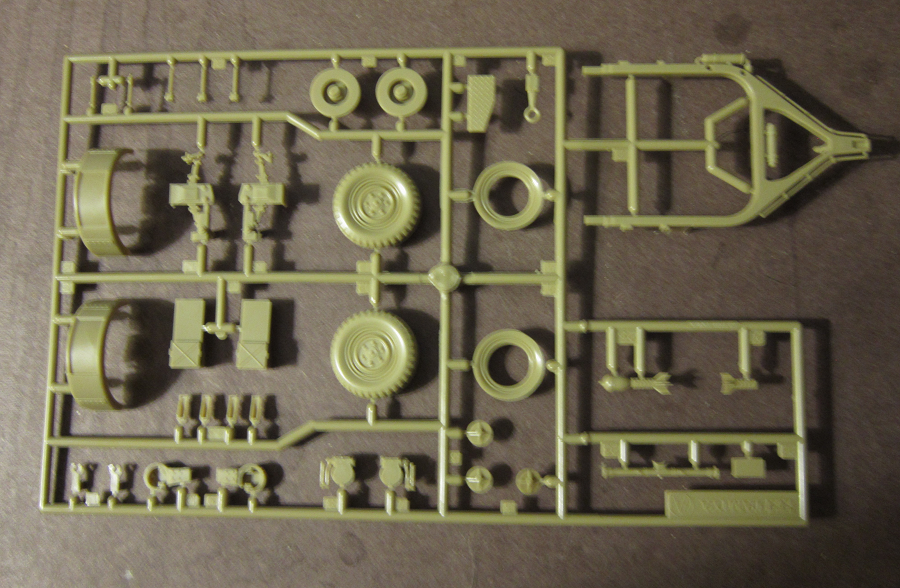 Sadly there are no crew figures included in the kit. It would have been nice to have had some. 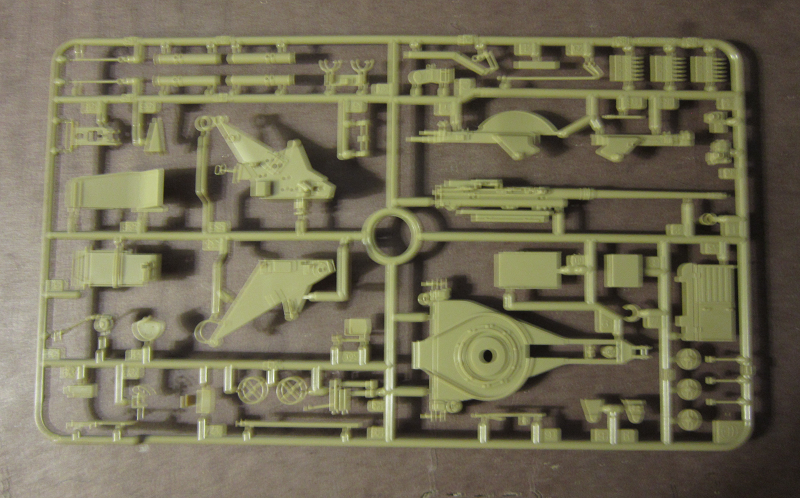 The decal sheet and the color kit catalog complete the kit's contents.

The sheet just holds white kill markings that go around the gun barrel. 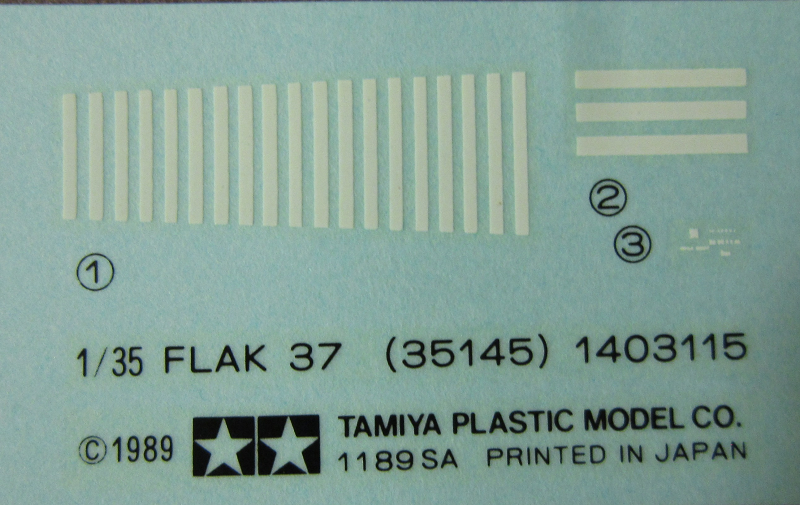