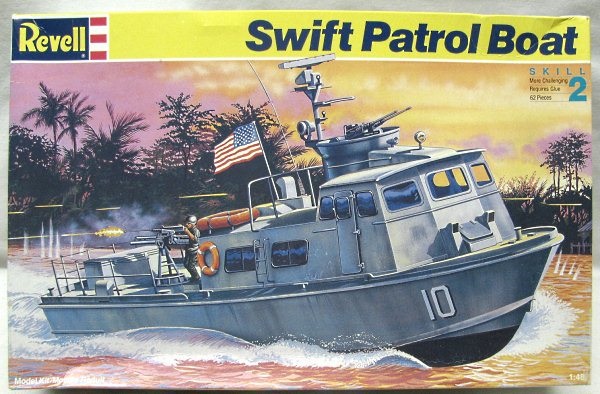 The Swift Boats were shallow draft, high-speed boats of all aluminum construction. They were powered by a pair of V-12 Detroit Diesel engines. Their primary function, in operations in Vietnam, was coastal surveillance.

They were equipped with radar, radios, several search-lights, bunks, a refrigerator, stove, and a toilet for the five man crew. They were capable of speeds of 25 knots and only required 4 feet of water to operate.

In some operations Swifts teamed up with larger Destroyer Escorts (DER’s), using them as mobile bases for extended missions. The DER’s carried the spare crews and supplies for the Swifts as they operated in waters far from permanent naval bases. In this way the Swifts could roam in coastal waters too shallow for larger vessels. They would run to the DER’s for pit stops, fresh crews, fuel and supplies to continue round-the-clock operations.

One of the most notable Swift Boat commanders was U.S. Senator John Kerry. He commanded the PCF-94 in early 1969, during which time he saw intense action and was decorated for valor during his tour of duty.

This kit is a re-release by Revell. Underneath the deck piece, in raised letters, is the original copyright date of 1967. The instructions give a re-release date of 2004. So, the molds are almost 40 years old. The detail is not bad for back in that era.

The kit comes in a shrink-wrapped tray and lid type box. The box art shows boat number 10 tooling down a Vietnam river with guns blazing and obviously under enemy fire.

A side panel has 3 color walk-around photos of the model made up. It says also there that the kit is a skill level 2, which means it is for modelers age 10 and above and requires glue and paint. Revell-Monogram’s web site is provided and a list of suggested paint colors is given to finish the model.

The other side panel says that the kit makes up to be 12 3/8” long and there are 62 parts in the kit and waterslide type decals. A one-paragraph history is provided. All of this is in French and English. Features of the kit are listed as: Movable .50 caliber machine guns with a 81mm mortar armed with a crew member. Detailed deck and raft. Authentic Naval markings include decals for PCF 10 and PCF 94. Molded in light gray and clear. A e-mail address is provided to contact Revell-Monogram to get a new product listing periodically. Revell-Monogram’s street address for their facility in Germany and their street address in Northbrook, Illinois are provided. The copyright of 2004 is shown. MADE IN USA and decal printed in China.

Inside the box is a full hull (it would have to be cut to do a water-line model ) and deck piece (this part has the anchors and their lines molded in) , and three trees of medium gray colored parts. There is also a tree of clear parts for the cabin windows and a search-light lens.. The decal sheet and the instructions complete the kit’s contents. A slick sheet of paper is included for the face of the decal to protect it. However, it is floating around the box loose and not protecting a darn thing.

Only the 3 trees of parts are in one cello bag. The hull, deck and clear parts are loose. It would have been nice if the clear parts had been cello-bagged, to keep them from getting scratched up. 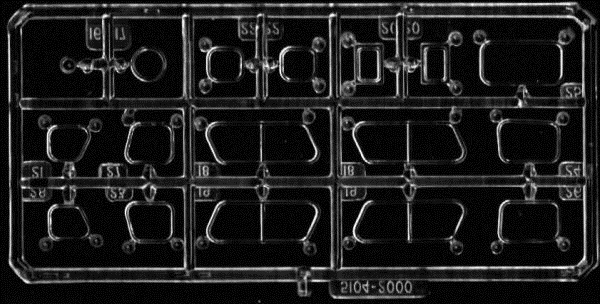 One part tree holds the two cabin sides. These parts have the antennas, flag staff, ventilators, flood lights etc. all molded into them. 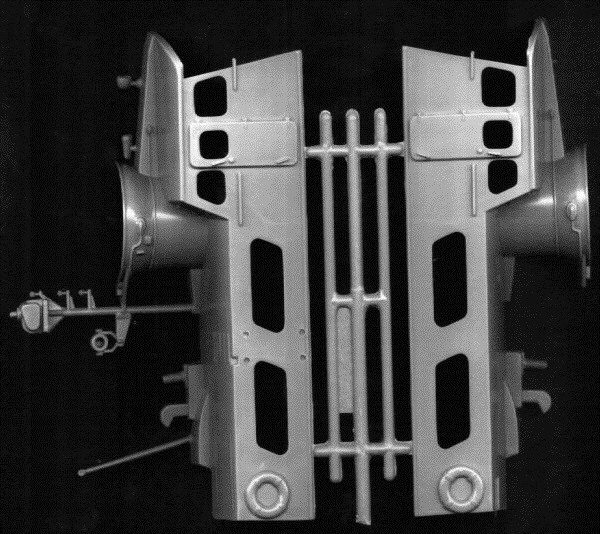 The second tree of parts holds the cabin front and rear walls, a railing, 2 x 50cal machine guns, propellers, the base stand piece and a one piece crewman figure. (9 parts) 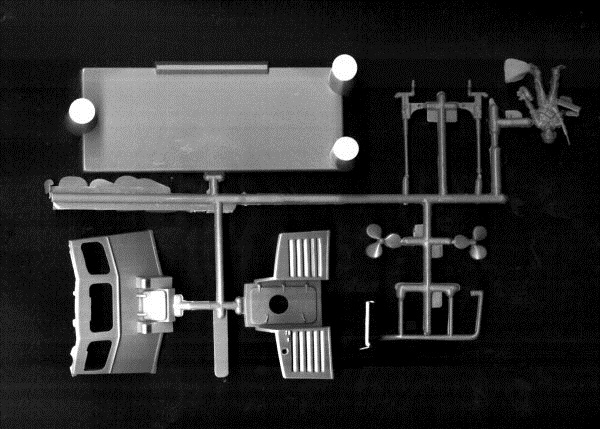 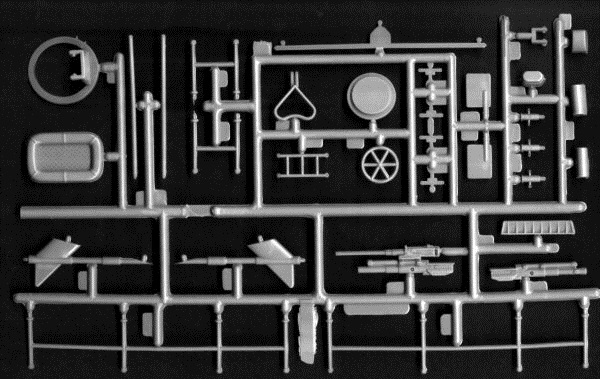 The biggest omission in the kit is any kind of interior detail for the inside of the cabins. This is sad, because with all those clear windows you will be able to see into that void. I am researching what might have been in there and maybe I can scratch-build some stuff to BUSY it up.

None of the trees are alphabetized. So, you have to search each tree to find the part number you need. Bad move Revell-Monogram.

The instructions consist of a single page that accordion folds out into 8 pages.

Page one begins with a different black and white illustration of a Swift boat in action. It is different from the box art. It shows a Swift under attack and helping a wounded man aboard out of the water. Overhead is a Huey helicopter and a Corsair jet making attack runs. In the background is a Destroyer Escort.

This is followed by a history of the vessel and READ BEFORE YOU BEGIN instructions in 3 languages (including English).

Page 2 begins with an exploded view drawing that shows all the kit parts. This is followed by the first 2 assembly steps. Paint colors, that need to be done as you assemble steps, are shown in each step.

Pages 3 through the top of page 7 give us a total of 26 assembly steps. This is quite a few steps for a kit with this few parts.

The bottom of page 7 gives a listing of paint colors needed to complete the kit and an illustration of the one crewman figure supplied in the kit, how to assemble him and what colors to paint him.

Page 8 has 2 black and white photos of the two different paint schemes possible with the kit decals. One is for boat number 10 and the other one is for Kerry’s boat number 94. A U.S. flag is also on the decal sheet, as well as a name plate that says “Swift Boat” to put on the hull cradle display base. 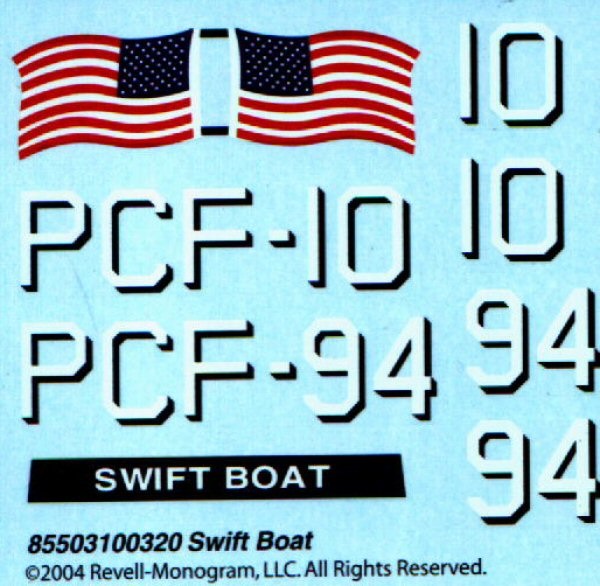 I think this kit will make up nicely, for what you get in the box that is. However, it is state of the art for 40 years ago and does call out for some more detail, especially in the cabin and more crew members too.

I’m not sure wether this kit is out of production now or not. I recommend it to ship modelers of average building skills. It is definitely a weekend project.