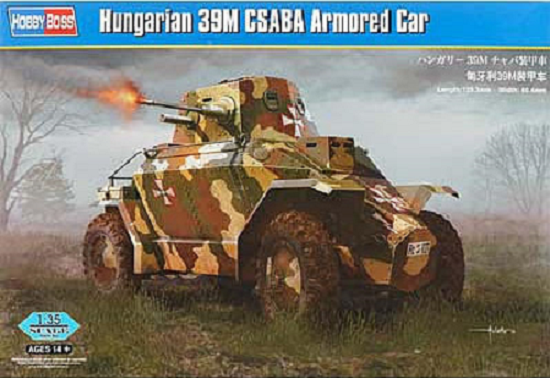 No Kit No.
By Ray Mehlberger

However, the Hobby Boss kit of this vehicle (kit no. 83866) is available at 10 different locations overseas.
​In 1933 the Hungarian engineer, Miklos Straussler lived in England. He came to an agreement with the Weiss Manfred Factory at Csepel in Budapest about realizing of the prototypes of his special armored car designed for the British Army.

The AC 1 (Armored Car) experimental vehicle was created in 1934. On the basis of the experiences of trials and fabrication a new enhanced version was designed, the AC II. In this car a second driving place was created to the rear which was a must in scout cars.

The modern construction that was originally designed for military purposes gained the Hungarian high command's approval. The trials with the the chassis of the AC II proved that the construction would satisfy the demand of the Hungarian Army on armored cars.

The vehicle's turret was built with the guidance of the Hungarian Institute of Military Technology. The car was made from 9 mm armor plate with rivets. The form of the body was more modern and more successful than the English version.

The vehicle was equipped with a 20 mm heavy gun and 8 mm machine gun. Both driving places were covered by opening armor plates. In 1939, after successful tests, the vehicle was established in the Hungarian Army under the name of 39M Csaba armored scout car.

Meanwhile, 61 of them were ordered for the reconnaissance units. Its engine was a 90 horse-power Ford engine built in Koln, Germany. In 1940 another 40 cars were ordered. Twenty of them were armed "Warrior" types and the remaining 12 served as command cars with radios. The production of the next series was delayed to 1944 because of the importance of the tank program. Nothing proves they were ever completed.
​THE KIT:

Botond was a model company based in Budapest, Hungary. They made resin models with various other materials added - like white metal parts, PE parts and wire.

This a limited run kit.

It came in a cardboard box with a tuck-in flap closure, taped shut.

The top of the box has a round white sticker on it that says "Militaria SAS over a address in Budapest and a telephone number. A second white square sticker has a image of a man wielding a battle ax and the name Botond Models. 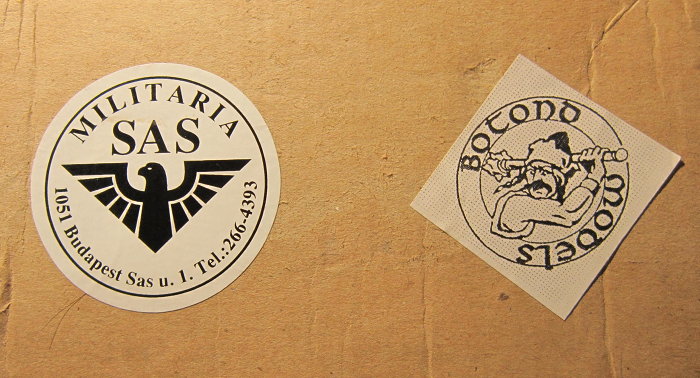 ​The cover art consists of still another white sticker with a side view of the 39M Csaba and the scale of the kit being 1/35th. 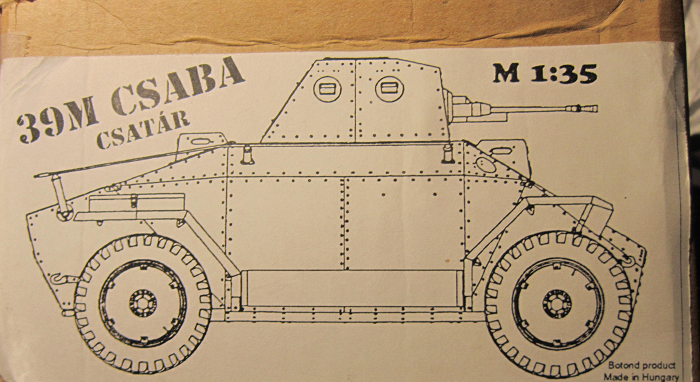 The kit contains tan resin parts of the hull bottom, top and roof panels, wheels, lockers, turret and its bottom plate (11 parts) All in a zip-locked cello bag. 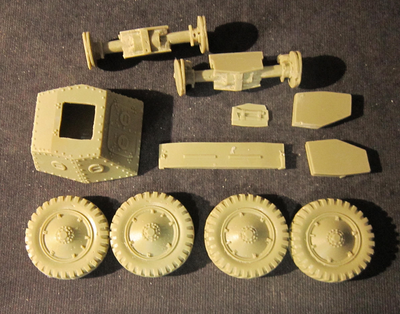 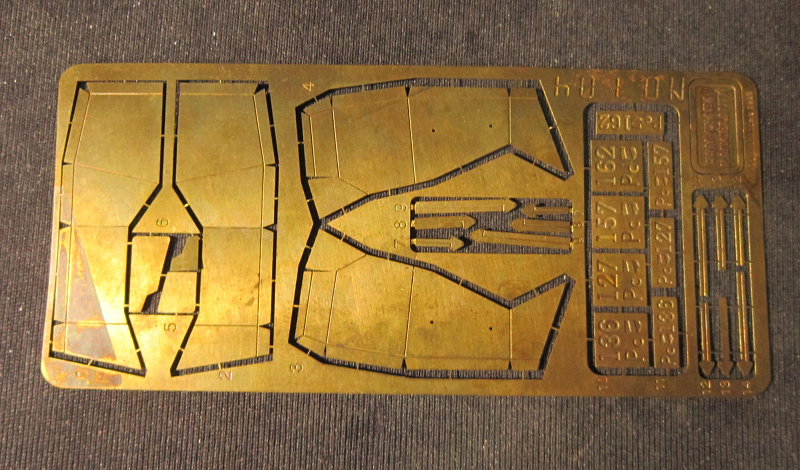 ​There is a length of wire in the kit to make the banister aerial out of.

​Although markings are shown in the instructions there is no decal sheet in the kit.

Page 1 has 2 4-view line drawings on it of color schemes.

One is overall dark-green with no markings shown.

The second one is in a mottle of dark-green and red-brown over a earth-yellow base with license no. 136 pc on the front and rear and a Hungarian cross on the sides of the hull.

Page 2 & 3 have 2 exploded drawings for assembly purposes and a pattern for bending the wire into the banister aerial. At the bottom of page 3 is another 4-view of a Csaba in overall dark-green with Hungarian cross on hull side, rear and nose and license plate no. 157 pc on the front and back.

A Csaba in a mottle of dark-green and red-brown over a base of earth-yellow with a Hungarian cross on the sides of the turret and licence no. 127 pc on the front and back.

A Csaba in overall dark-green with Hungarian cross on the sides, front and rear of the hull and license no. 162 pc on the front and rear.

This kit is also made by Hobby Boss. I include the box art for that one. It is very much available from many places overseas.