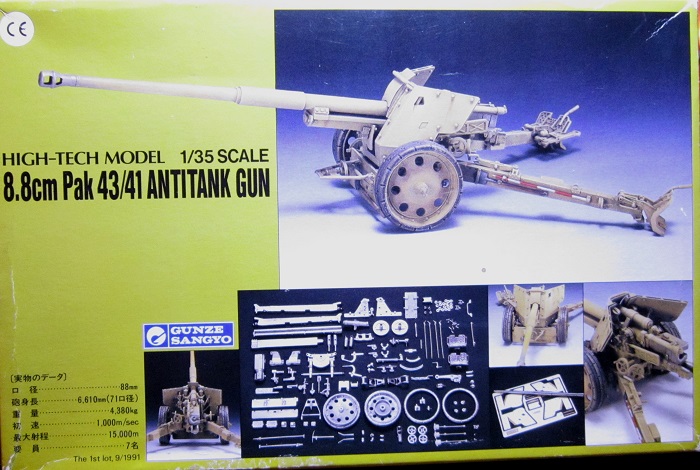 Gunze Sangyo is a model company based in Tokyo Japan.

World War Two was a war where fierce mechanized warfare took place. Particularly on the Russian Front. There was an increasing demand from German troops for deployment of stronger antitank guns to combat Soviet Army tanks that were being produced with both  better quality and quantity.

In response, Krupp developed the 8.8 cm Pak 43, but its mass production failed to proceed satisfactorily. To respond to the demand from the front line the Pak 43/41 was temporarily manufactured. The Pak 43/41,  composed of a mixture of the gun-mounting and legs from a 10.5cm light howitzer and wheels from a 15cm heavy howitzer, was too heavy and looked so ugly that soldiers nicknamed it “a barn door”. However, the power of a long gun of 8.8cm caliber was so great that it was successfully able to beat all tanks of the Allied Forces, including even Soviet heavy tanks like the KV and the Stalin. It was the best antitank gun built during WWII. Its rang was 19,500m, which was fairly comparable to 10cm guns in cannon class.

A mobile gun with the Pak 43/41 mounted on a tank chassis were also developed as the Nashorn and Jagdpanther. They were the champions in antitank fighting. On the Konigstiger tank, known as the most powerful heavy tank in WWII, the Pak 43/41 was also mounted as the main gun. It really frightened Allied soldiers.
THE KIT:

The kit comes in a shrink-wrapped tray and lid type box. The box art has 3 color photos of the model made up and a black and white photo of all the metal parts in the kit and the brass PE fret.

One side panel has another color picture of the model made up, followed by the history of the Pak 43/41 in English and Japanese.

The other side panel has another color picture of the model made up, followed by Japanes text and Gunze Sangyo’s address in Tokyo Japan and their office address in Germany.

Inside the box are 5 generic white boxes with tuck-in flaps that hold the metal parts in sealed cello bags. There are so many parts in this kit that I am not going to do my usual naming them all. I leave the readers to see for themselves what’s there in the pictures provided.

The brass PE fret is in a sealed cello with a stiff card to protect the fret from any premature bends.

The instructions complete the kit’s contents. There are no crew figures provided or decals. However, I have seldom ever seen any markings on a Pak 43/41 other than kill rings around the barrel.

The instructions consist of an unbound booklet of 8 pages in 8” x 11 ½” page format.

Page 1 begins with 3 black and white photos of the model made up, followed by “Caution – not suitable for children under 3 years. Contains small parts” in 9 languages including English.

Page 2 repeats the black and white photo of the kits parts that is on the box art. However, part numbers are on this photo next to the parts and below the photo is a listing of the names of all the parts, but sadly only in Japanese.

Page 3 through 8 give a grand total of 9 assembly step with sometimes written instructions in English and Japanese.

The kit must be completed using super glue due to it all being metal. Most are white metal castings and there is a turned aluminum gun barrel included.

This kit is very very complex and not for the novice modeler. Highly recommended to advanced modelers. It is definitely not a weekend project either.

I inherited this kit from a modeling friend of mine who died of cancer years ago. He willed me all his AFV kits. I sorely miss him.