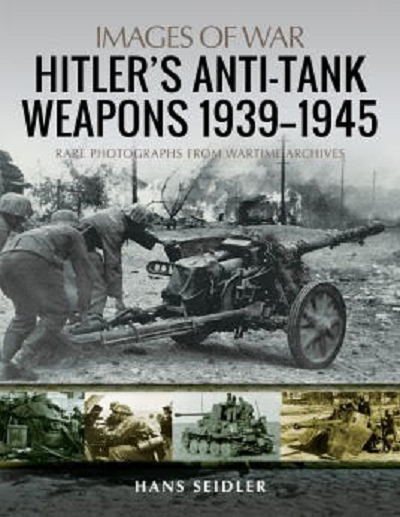 MSRP: $22.95
​Hitler’s Wehrmacht and SS units will be remembered for their aggressive “Blitzkrieg” tactics. But, as the war progressed the Germans, recognizing the offensive capability of armoured warfare, developed an impressive range of anti-tank warfare weaponry and munitions.

Using many rare unpublished images, this Images of War book covers the full Nazi anti-armour capability from the 3.7cm Pak 35, 5cm Pak 38 and 7.5cm Pak 40 to the versatile 8.8 Flak gun feared by the Allies, Also featured are the half-tracks  and converted Panzers that pulled or mounted these weapons and carried forward observers and reconnaissance elements.

Later hand-held anti-tank weapons came into service and were effective and economic against Allied armor. The Panzer faust, with its shaped charge warhead, became the first disposable anti-tank weapon in history.

This comprehensive book show this formidable range of weapons in action from Poland in 1939, through North Africa and the Eastern Front to the final collapse in 1945.

Hans Seidler is a leading collector of WWII memorabilia and an authority on German armed forces and their equipment. His published works with Pen & Sword includes “Hitler’s Tank Killers – Sturmgeschutz at War 1940-1945”,”Luftwaffe Flak Divisions”, “Hitler’s Boy Soldiers” and “Hitler’s Defeat on the Western Front 1944-1945”,  all in the Images of War Series.

Pen & Sword Books Ltd. Is based in the UK.

The cover art shows a black and white wartime photo of a Pak 35/36 and its crew set up in a field that has burning buildings in the background.

Below this there are 4

The back cover shows 3 more small black and white wartime photos of Tiger tanks. This is strange, because they are not illustrated in the book at all.

These weapons are mostly shown with their crews around them.

It will be of great interest to modelers and military historians alike.

I want to sincerely thank Casemate Publishers for this review sample. They are the North American distributors for Pen & Sword books and all Pen & Sword book titles can be viewed on Casemates web site at:
www.casematepublishers.com