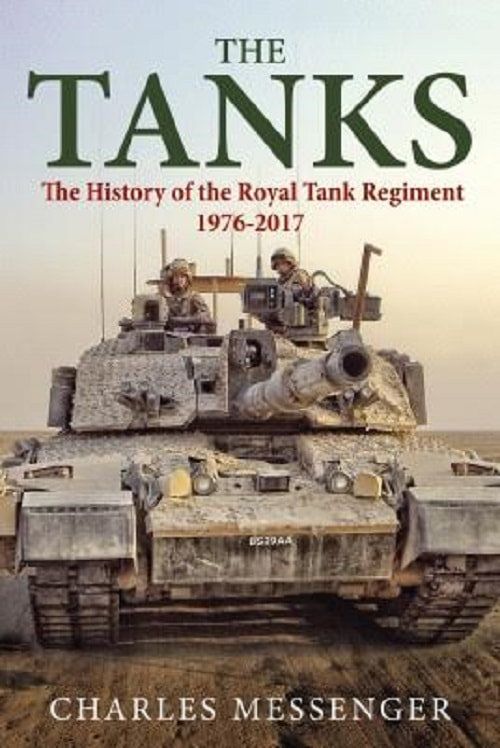 Book Review of The Tanks
The History of the Royal Tank Regiment 1976-2017
Author: Charles Messenger

MSRP: $59.95
​The Royal Tank Regiment celebrated its centenary in 2017. This, the fourth volume of the Regiment's history, begins in the midst of the Cold War, with the four RTR regiments mainly based in Germany. They experienced NATO's rearmament in the early 1980's and the implementation of General Sir Nigel Bagnall's revolutionary new concept for the defense of the NATO Central Region. The Troubles in Northern Ireland were also at the height and the RTR served there on numerous occasions. In addition, the Regiment saw service with the United Nations in Cyprus.

The Berlin Wall came down at the end of 1989, signaling the end of the Cold War. Yet, President Bush's New World Order proved anything but. Saddam Hussein's invasion of Kuwait resulted in the First Gulf War, in which the Regiment played its part in many ways. However, the so called Peace Dividend meant that the RTR was reduced just two regiments. Then cam the horrors of the civil war in former Yugoslavia, in which the Regiment also became involved.

While it did operate in tanks in Kosovo, it was also demonstrating its versatility in many other roles in this increasingly uncertain time. Not at least was the formation of the Joint NBC Regiment, made up of 1 RTR and the RAF Regiment.

The RTR was at the forefront of the assault on Basrah in the 2nd Gulf War and thereafter served a number of tours in Iraq. Indeed, the Regiment was among the very last troops to withdraw from the country at the end of Operation telic in 2009.

By this time, the British Army was heavily commited to Afghanistan and the Regiment would spend the next five years deploying on Operation Herrick. As in Iraq, it carried out a variety of missions and in many different types of vehicles.

This book makes plain how tough conditions were, as in Iraq. The Army, however, faced further reductions and the RTR was cut to a single Challenger 2 regiment.

This history not only covers the Regiment's numerous operational tours. It details the vehicles it has used and provides an idea of how life in the RTR has changed over the past forty years. It does not duck controversy and allows the voices of all ranks to be heard. "The Tanks" reflects an ever changing British Army, the one constant being the character of the RTR soldier, the Tankie.

Charles Messenger is a widely recognized military historian, who served for 19 years as a regular officer and for 13 years as a Territorial in the Royal Tank Regiment. His service took him to Libya, Germany and USA and Northern Ireland. He is the author of more than 40 books on military history and defense matters, and they range from campaign studies through to biographies and regimental histories. He has also carried numerous historical studies for the Ministry of Defense and has written and helped to direct a number of TV documentaries. He lectures widely, peer reviews for publishers and is also an occasional battlefield guide.

There are 42 color and 3 black and white photos in the book, 10 chapters, an 8 page index and 6 appendixes.

Helion and Company is based in the UK.

This book will be of interest to military historians and modelers alike.

I want to thank the folks at Casemate, who sent me this review sample and also Helion and Company.

All Helion titles can be seen on the Casemate web site at:
​www.casematepublishing.com