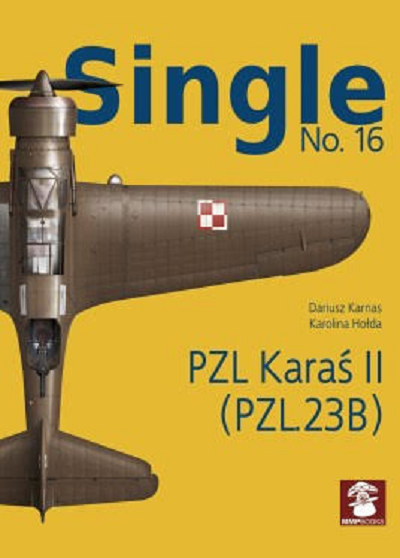 The PZL.23 Karaś (crucian carp) was a Polish light bomber and reconnaissance aircraft designed in the early 1930s by PZL in Warsaw.

During the interwar period, the Polish High Command had placed considerable emphasis upon the role of armed aerial reconnaissance aircraft. To meet this interest, during 1931, PZL decided to embark on the development of a new combat aircraft to meet this role.

An earlier proposal for a fast single-engine passenger airliner, designated the PZL.13, was adopted as the basis of the new design. The new aircraft, which was designated as the PZL.23, a relatively modern design, which integrated features such as an all-metal body and unconventional wing construction.

As the British Bristol Pegasus radial engine was licensed for use in Poland only, export aircraft were instead equipped with the Gnome-Rhône 14K engine. Powered as such and along with some airframe changes, the PZL.23 became the PZL.43 Karaś.

It was the primary Polish reconnaissance bomber in use during the invasion of Poland. On 2 September 1939, a single PZL.23B of the 21st Escadrille was responsible for the bombing of a factory in Ohlau, inside Germany; the attack represented the first bombing raid to be conducted against a target in territory within the Third Reich.

During the following days, the PZL.23 bomber escadrilles were deployed to attack several advancing German armoured columns; they often conducted these attacks at low altitudes, which made them vulnerable to anti-aircraft fire. By the end of 1939, around 120 PZL.23s (86 per cent of the Polish Air Force's inventory of the type) were destroyed; however, of these, only 67 had been lost as a direct result of enemy actions.

Mushroom Model Publications (MMP) is based in the UK. They have all their books printed by their associate Stratus, that is based in Sandomierz, Poland in the English language. Stratus also does their own line of books in both Polish and English.

The bright yellow cover has a color illustration of a top view of the Karas in overall dark-green, with the Polish Air Force red and white checkerboard national insignias on the wings. This view is wrapped around the book with half of it on the back cover. It is one of the 3 views repeated in the book on the last 2 pages. More about those views later.

There are 61 black and white illustrations in the book.

In 1/72nd scale there are 5 side view line drawings, a 3-view showing the Karas’s front, rear and top and just a lone top view.

In 1/48th scale there are also 5 side view line drawings, a top view and bottom view.

There are 5 black and white wartime photos of the Karas, 5 black and white photos of its engine, 10 of the cockpit interior (one photo with a list of the names of each dashboard instrument),  5 of  the canopy parts, 1 of the radio, 2 of bombs it carried, illustrations of the elevator and rudder inner structures, 6 of the rear gun position with 2 of the gun.

Color photos include one of the dashboard with a listing of the names of the instruments in it.

The 3-view color illustrations on the last 2 pages (and the top view as the cover art) show a Karas that is overall dark-green with a blue undercarriage.

The side view shows a white no. 5 on the rudder along with the Polish checkerboard insignia. On the fuselage sides is a pale blue square with a leaping red deer on it.

The top view shows the Polish checkerboard insignia located at the middle of the right wing and at the tip of the left wing. I read someplace this was done to throw enemy gunners aim off.

This is one neat book about the Karas.

I cannot find a listing of one in a larger scale though.

I want to thank Casemate Publishers for this review sample and Roger Walsgrove owner of MMP.

Casemate is the North American distributor of MMP books and all MMP titles can be seen on Casemates website at:
https://www.casematepublishers.com/