My kit is out of production. It has a copyright date of 1966. There is one location on line in Europe that has the kit for 19.00 eur.
​HISTORY:

The Westland Lysander (nickname the 'Lizzie') is a British army co-operation and liaison aircraft produced by Westland Aircraft used immediately before and during the Second World War. After becoming obsolete in the army co-operation role, the aircraft's exceptional short-field performance enabled clandestine missions using small, improvised airstrips behind enemy lines to place or recover agents, particularly in occupied France with the help of the French Resistance.

British army air co-operation aircraft were named after mythical or historical military leaders; in this case the Spartan admiral Lysander was chosen.
n 1934 the Air Ministry issued Specification A.39/34 for an army co-operation aircraft to replace the Hawker Hector. Initially Hawker Aircraft, Avro and Bristol were invited to submit designs, but after some debate within the Ministry, a submission from Westland was invited as well.

The Westland design, internally designated P.8, was the work of Arthur Davenport under the direction of "Teddy" Petter. It was Petter's second aircraft design and he spent considerable time interviewing Royal Air Force pilots to find out what they wanted from such an aircraft. Less clear was whether he or the pilots understood the army co-operation role and what the army wanted, which was tactical reconnaissance and artillery reconnaissance capability – photographic reconnaissance and observation of artillery fire in daylight – up to about 15,000 yards (14 km) behind the enemy front.

The result of Petter's pilot inquiries suggested that field of view, low-speed handling characteristics and STOL performance were the most important requirements

Davenport and Petter designed an aircraft to incorporate these features with unconventional results. The Lysander was powered by a Bristol Mercury air-cooled radial engine and had high wings and a fixed conventional landing gear mounted on an innovative inverted U square-section tube that supported wing struts at the apex, was in itself resilient, and contained (internal) springs for the faired wheels.

The large streamlined spats also each contained a mounting for a Browning machine gun and for small, removable stub wings that could be used to carry light bombs or supply canisters. The wings had a reverse taper towards the root, which gave the impression of a bent gull wing from some angles, although the spars were straight.

It had a girder type construction faired with a light wood stringers to give the aerodynamic shape. The forward fuselage was duralumin tube joined with brackets and plates, and the after part was welded stainless steel tubes. Plates and brackets were cut from channel extrusions rather than being formed from sheet steel.

The front spar and lift struts were extrusions. The wing itself was fabric covered, and its thickness was maximized at the lift strut anchorage location, similar to that of later marks of the Stinson Reliant high-winged transport monoplane.
Despite its appearance, the Lysander was aerodynamically advanced; being equipped with fully automatic wing slots and slotted flaps and a variable incidence tailplane. These refinements gave the Lysander a stalling speed of only 65 mph (104 km/h, 56.5 knots).

It also featured the largest Elektron alloy extrusion made at the time: the one-piece frame already mentioned that supporting the wings and wheels. (This was a feature of British-built aircraft only – Canadian-built machines had a conventionally fabricated assembly due to the difficulties involved in manufacturing such a large extrusion.)

The Air Ministry requested two prototypes of the P.8 and the competing Bristol Type 148, quickly selecting the Westland aircraft for production and issuing a contract in September 1936.

Hawk was a model company based in Chicago, IL. I don't believe that they exist anymore.

This kit came in a shrink-wrapped blousy tray and lid type box that is 2" too long.
The box art shows a Lysander profile, posed against an all-white background. Similar to how Tamiya does the majority of their box arts too.

It is overall olive-drab with sky fuselage code OG roundel E and a small black serial no. L4806 behind the fuselage code.

On the left side of the cover art is a color photo of the model made up over a black and white wartime photo of a Lysander with fuselage code GV roundel C in the box art scheme.

One side panel has 3 color box arts of other 1/48th scale kits that Hawk manufactured: a Grumman F8F-2, a Freedom Fighter and a North American OV-10A. No kit numbers are mentioned for these 3.

​The other side panel tells what benefits a boy will get by building a model and Hawk's address in Chicago, IL.
​WHAT'S IN THE BOX:

The trees are not cello bagged. So, lots of parts have broken off the trees due to friction against the trees. Parts are molded in olive-drab and clear. The decal sheet and instructions complete the kit's contents.

The instructions consist of a single sheet folded in the center to create 4 pages in 8 1/2" x 11" page format.

Page 1 has 4 black and white photos of the model made up. The right side of the page has the Lysander's history in English, Spanish and French.

Pages 2 through 4 give a total of 9 assembly steps, with a lot of text in the 3 languages.

The trees in the kit look really chopped-up. They are not alphabetized or illustrated in the instructions and have no part number tabs next to parts on them. This means a lot of studying of the instructions is needed to get the right part for each assembly. Bad move Hawk !!

A lot of the loose parts are floating around in the box. I put some of these smaller parts into an old plastic pill bottle with a lid for safe keeping.

There are 2 loose olive-drab fuselage halves. 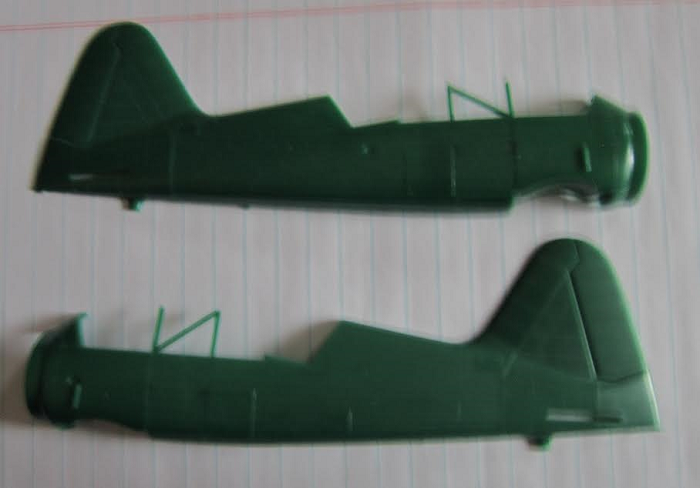 ​A olive-drab tree with 4 wing halves on it. 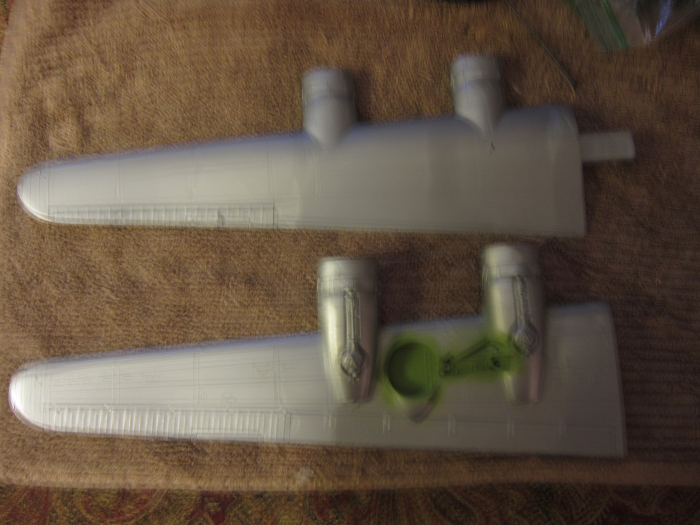 ​A olive-drab tree with the stub wings that go on the main wheel legs, with the dashboard, spinner and seat etc.(10 parts)

​A olive-drab tree with the main wheels, wing struts and bombs on it (19 parts) 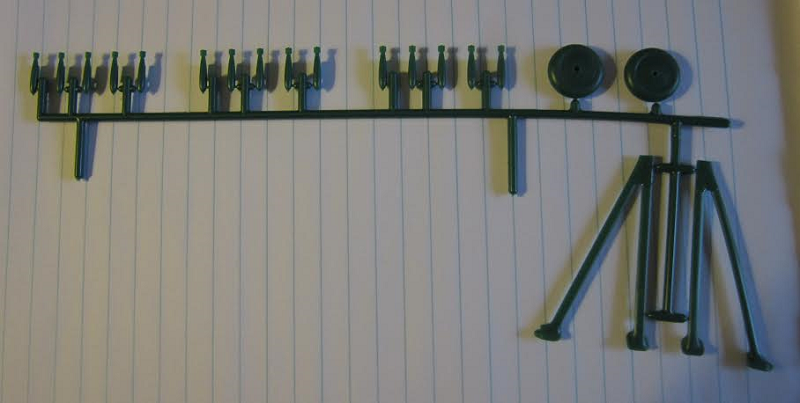 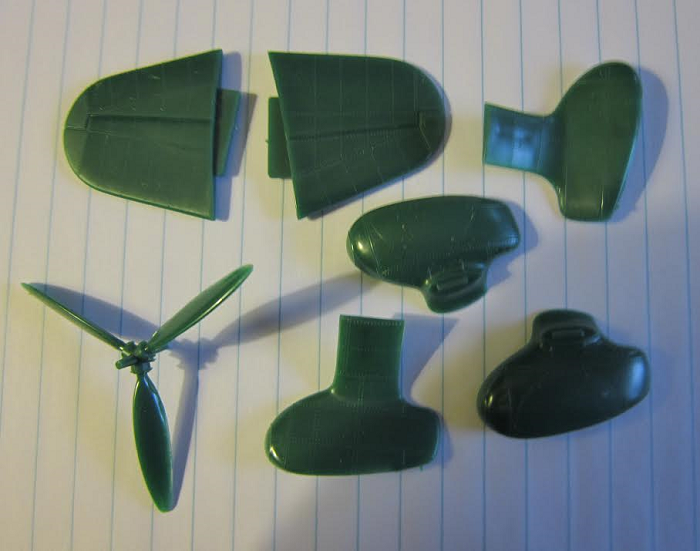 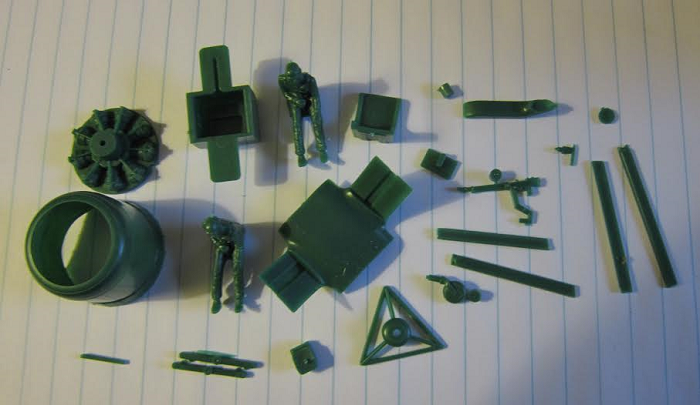 ​There are 3 clear canopy sections. 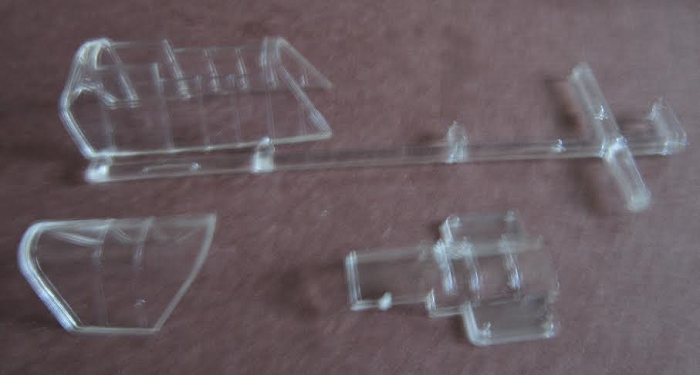 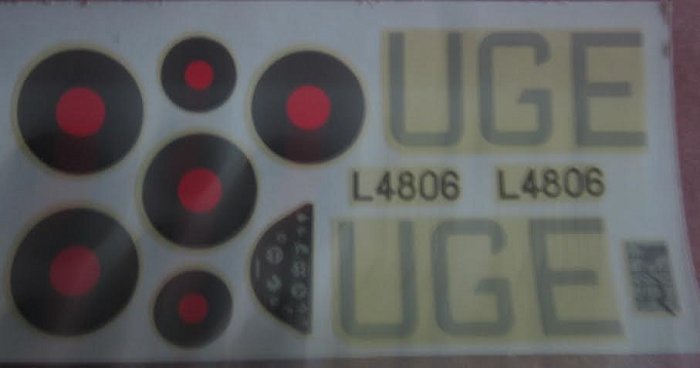 ​
The kit has nice raised rib patterns on the fuselage and wings.
​Recommended.