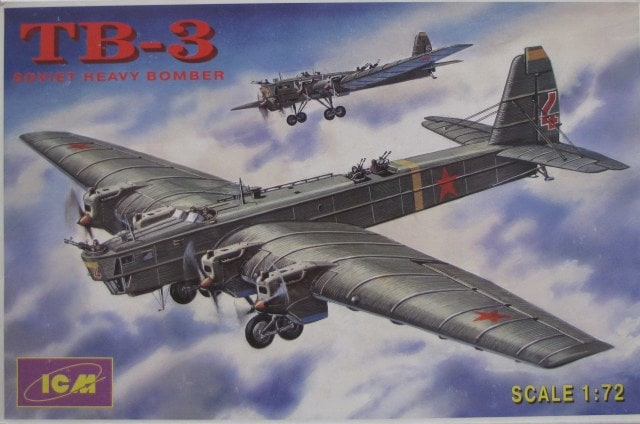 Mars Model released a kit of it later. I think it too is out of production. I also think it was the old ICM molds.
​History:

The first TB-3 four-engined, low-wing, all-metal bomber completed its maiden flight on December 22nd, 1930. It was designed by Tupolev five years earlier, and had been under active development for some four years.

The first prototype was powered by U.S. Curtiss Conqueror engines and despite some technical problems had given every sign of being an outstanding bomber.

In less than a year, production was underway at two major Moscow aircraft factories run by GAZ.

These first series machines were powered by Soviet-built versions of the German BMW VI engine of 730 hp. After flight tests, the first aircraft was delivered to the Soviet Air Force in early 1932.

Some took part in a fly-over of Red Square on May Day that year. The next year, 50 of these bombers did another fly-over.

These early bombers had a loaded weight higher than any other contemporary land-plane in service anywhere else in the world at that time.

Defensive armament consisted of eight 7.62mm (o.30 in) DA machine-guns. There was a twin-gun mount in the nose and one each in tandem, dorsal, open gun positions.

The remaining guns were installed into semi-retractable turrets in the underside of the wings, just inboard of the outer engines. This was a very similar arrangement to the German early Ju-52s. Another similarity to the Ju-52 was the aircraft's corrugated duralumin sheet covering.

The thickness of the wings allowed the wings to contain 'crawl-ways' giving access to the engines while in flight. The pilots sat, side by side in an open cockpit behind individual windshields.

After the German invasion in June 1941, and by October 22nd, there were only 92 TB-3s left. Most of these surviving aircraft were used for transport duties and occasional night-bombing sorties.

Very little was ever done with paratrooper-carrying, as paratroops units were now pressed into service alongside the infantry.

Some experiments were conducted with the TB-3 carrying parasite fighters, above and below its wings. (This combination, known as the 'Zvenlo 2', has been announced as a future ICM kit release).

Developed into: Tupolev ANT-16
​The Kit:

ICM is a model company based in Kyiv, Ukraine. They are a prolific company that manufactures all manner of model subjects in the popula scales

ICM's TB-3 kit comes in a rather 'blousy' shrink-wrapped tray and lid type box. The first thing one sees, when opening the box, is the large letter 'L' voids around the parts trees. The box is 5 1/2" too long and 2 1/2" too wide.

This is deceiving, as this kit will make up into a large aircraft. I think that ICM has these parts trees made to the maximum size of the molds that their injection machines can accept. That may explain the breakdown of the kit parts.

One side panel says the kit is made in the Ukraine, followed by histories of the TB-3 in English, German, Czech and Russian. Each marked with a color illustration of the flags of the country that speaks that language.

​The other side panel says the kit is for modellers over the age of 10, followed by color box arts or 4 other Soviet aircraft kits that ICM manufactures: a Yak-9, I-15bis, Tu-2 and a I-16. No kit numbers for these is provided. I assume they are all to 1/72nd scale.

Page 1 begins with a black and white repeat of the box art,  and a quick two paragraph history of the TB-3 in English, German, Czech, and Russian.

Page 2 and 3 provide parts tree drawings for the 11 trees of parts and an international assembly symbols guide.

Pages 4 through 9 give you 18 assembly steps. Throughout these steps letter codes are given to you for the paint colors for parts that need to be painted as you assemble the kit.

Pages 10 and 11 are the color scheme and markings drawings. Unfortunately, no drawing is given to show the upper patterns for the two part camouflage schemes, done in black wave pattern over dark green. Only in overall green with the 2 countries insignias.

Page 12 gives you warnings, about keeping your modeling room well ventilated, when you use glue or paint – and to stay away from open flame too.

It also tells you what tools you need to remove parts from the sprues.

Next, is an explanation of the alphabetic letters used for color indications of parts in the kit. The chart recommends Humbrol brand paints. Decal instructions then follow.

The letter 'A' parts tree holds the outer wing surfaces for the top and bottom of the wings. (4 parts) 2 parts have broken off the tree and are floating around loose. 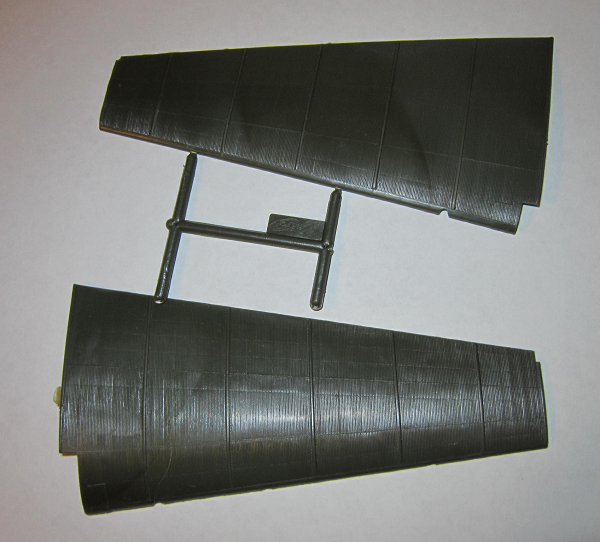 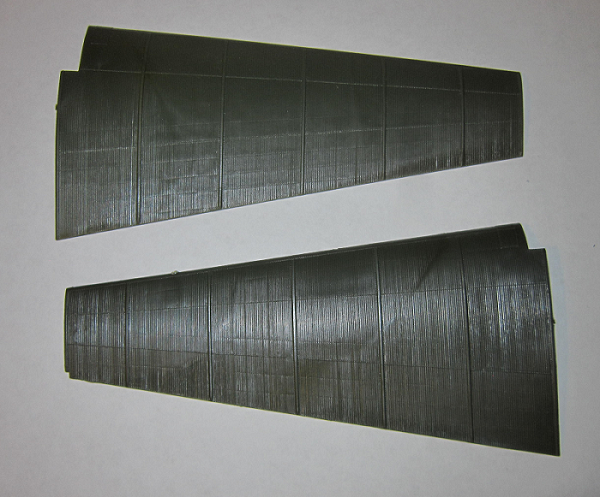 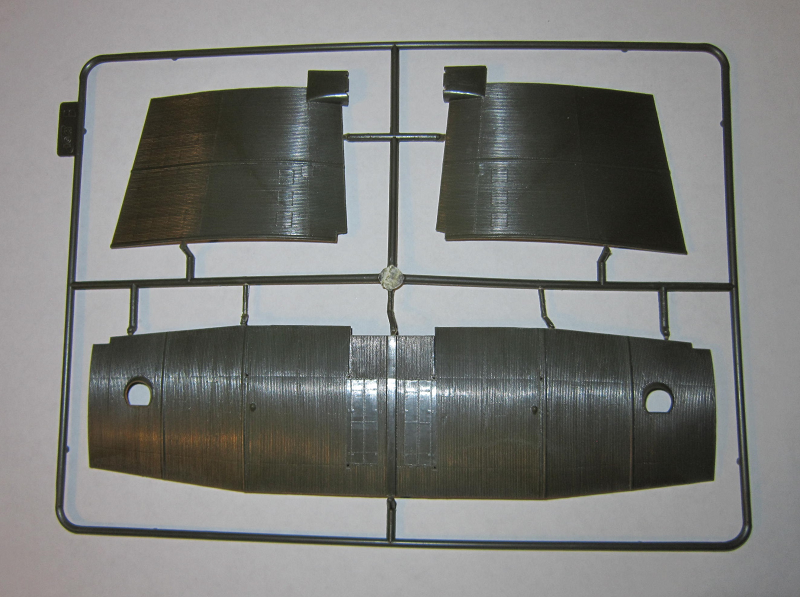 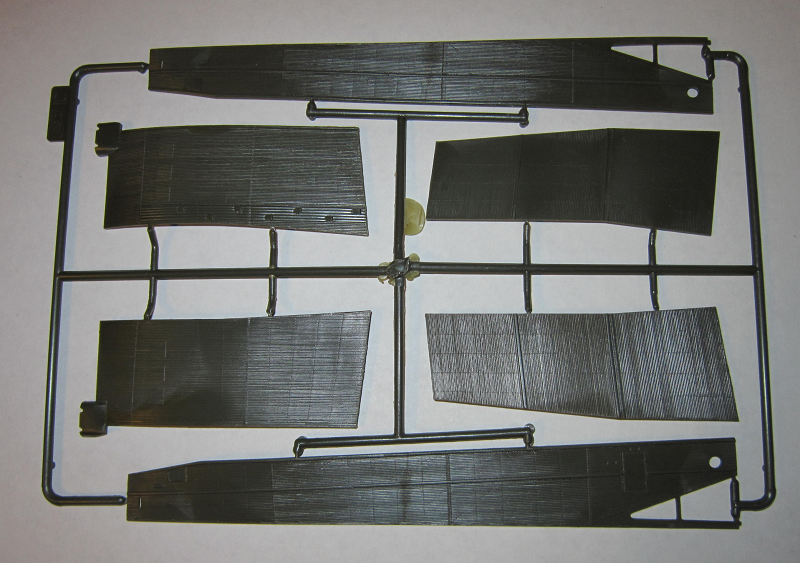 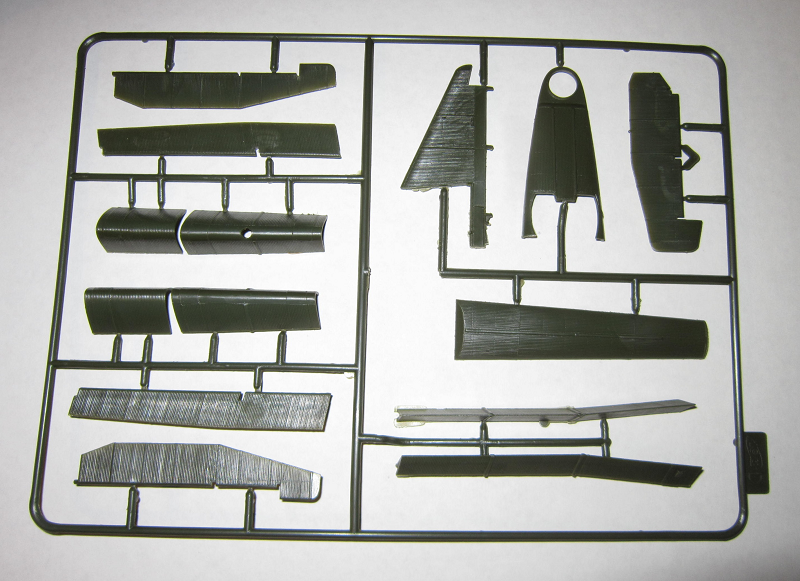 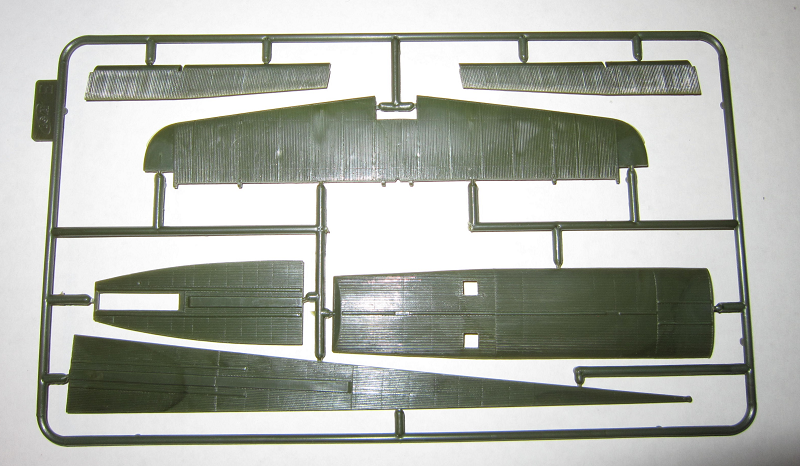 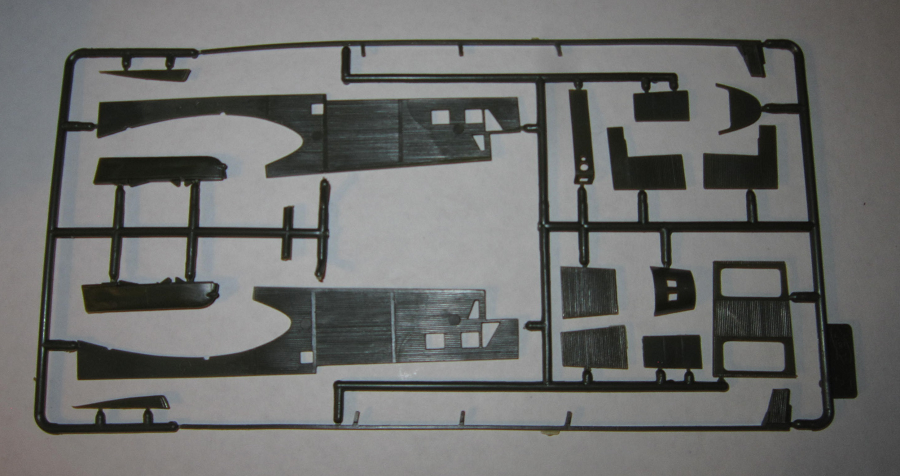 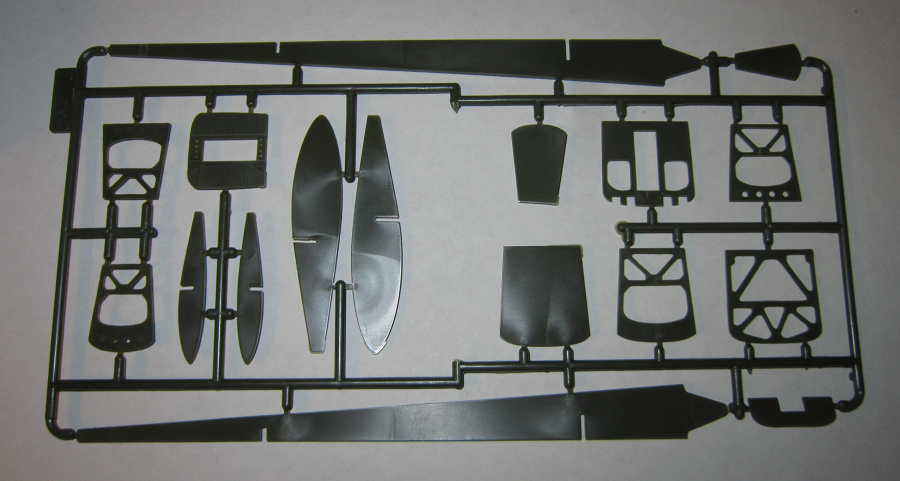 There is no letter 'I' tree. 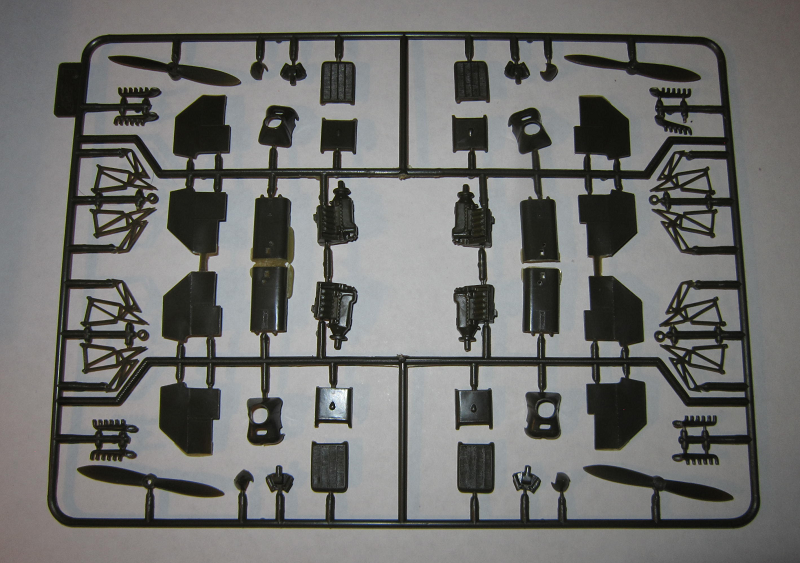 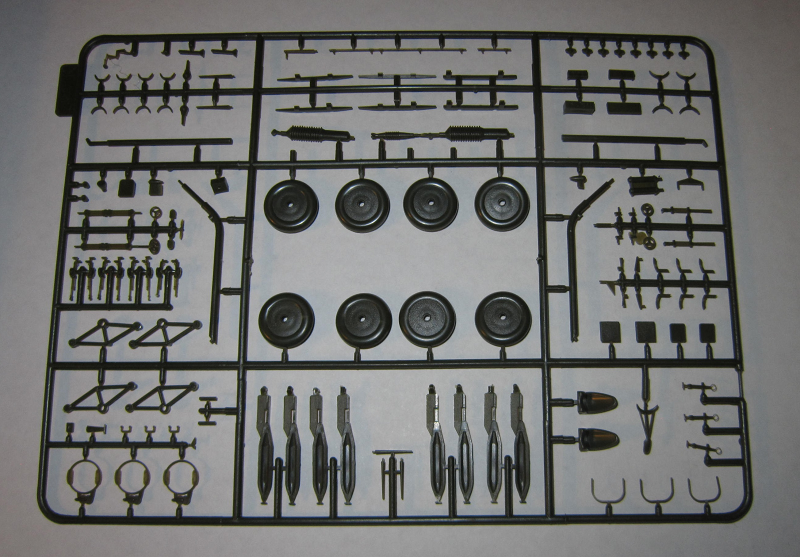 ​A large decal sheet contains markings for six different Soviet aircraft, spanning the years from 1936 to 1942, and one scheme for a Chinese Nationalist Aircraft from May of 1938. 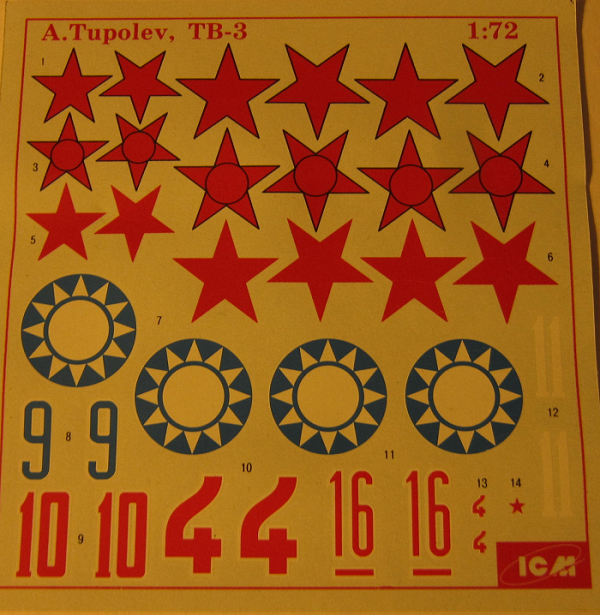 ​I read, in another review of this kit, that the Chinese never got this early version of the TB-3 – so the Chinese decals in the kit may be inappropriate to use.

This kit assembles similar to a balsa and tissue type model kit. This is because of all the internal bulkheads and stringers that you assemble...and then put the corrugated parts over. It should make for a very, very sturdy model. 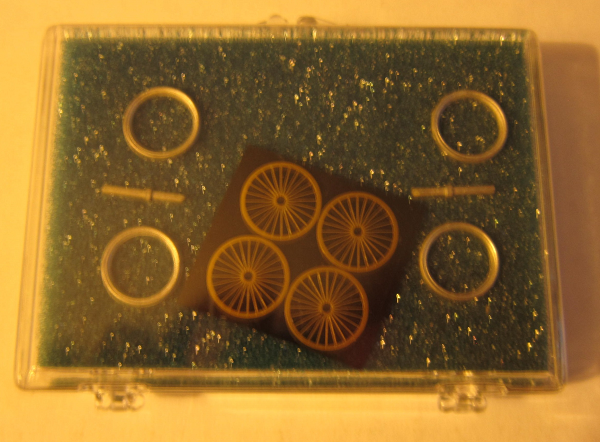 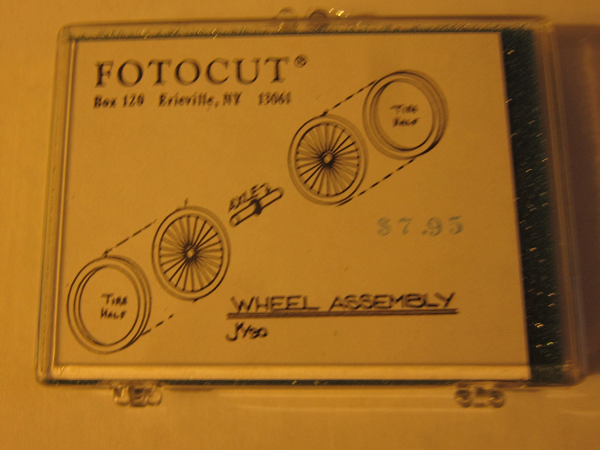 I also read that the later parasite carrying Zvenlo version of this aircraft, that ICM plans for a later kit, may be this early version – re-boxed – with the two I-16 aircraft.

This will be wrong because the Zvenlo was a later version with a different fuselage, cowling and other noticeable differences.

Anyway, if ICM did do this later model it's out of production and not listed by anybody.

Shortly after doing this in-box review, I received the November issue of Fine Scale Modeler magazine. It has a build review in it by David L. Veres.

He warns that the transparencies for this kit are a poor fit and recommends using Krystal Kleer for the windows. He also warned that the decals were brittle and tended to shatter for him when he built the kit.

I sure like this big Pterodactyl looking aircraft and look forward to building it. It should be a real attention-grabber on any modeler's display shelf.

Another review I read talked about the difficulties building this kit. It is not for the novice and only for modelers with very advanced building skills.

This kit was purchased at the local shop.

Highly recommended...if you can find one anymore that is.