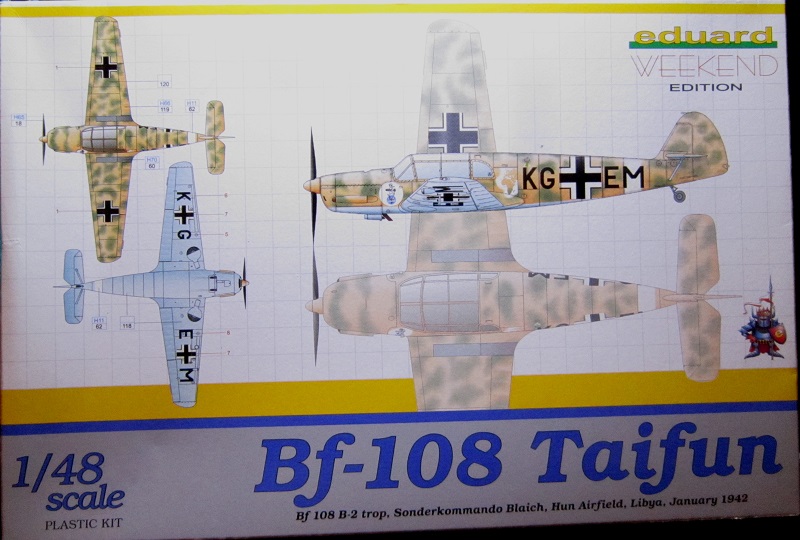 The Messerschmitt Bf 108 Taifun (Typhoon) was a German single-engined sports and touring aircraft developed by Bayerische Flugzeugworke. The Bf 108 was of modern, all-metal construction, and the famous Messerschmitt Bf 109 fighter used many of the same design features.

Originally designated the M-37, the aircraft was specifically designed as a two-seat sports/recreation aircraft for competition in the 4th Challenge de Tourisme Internationale in 1934. The M-37 prototype flew first in the Spring of 1934, powered by a 250 hp Hirth HM 8U inverted-V piston engine, which drove a three-bladed propeller.

The A version first flew in 1934, followed by the B version in 1935. The B version used the Argus As 10 inverted-V, air-cooled engine. The nickname Taifun (German for Typhoon ) was given to the aircraft by Ferman aviatrix, Elly Beinhorn, the second woman to fly solo around the world. Typhoon was also the nickname given to a WWII German anti-aircraft unguided rocket system.

The Bf 108 was adopted into Luftwaffe service during WWII, where it was primarily used as a personnel transport and liaison aircraft. The plane involved in the famous Mechelen Incident was a Bf 108. Production of the Bf 108 was transferred to occupied France during WWII and production continued after the war as the Nord 1000 Pingouin. Bf 109s, or perhaps postwar Nord 1000’s, played the role of Messerschmitt Bf 109 fighters in some movies, including 633 Squadron and Von Ryan’s Express.

Eduard is a company based in the Czech Republic. They were one of the first (if not THE FIRST (or perhaps it was the ON THE MARK company, with their AFV PE?) company to produce after-market photo-etched parts to super detail aircraft model kits with. Later, Eduard produced PE for AFV kits and then went into production of injection molded aircraft kits and a few armor ones.

This new kit is in a shrink-wrapped tray an lid type box.

The box art shows a 4-view illustration of a Bf 108B-2 Trop. in the markings of Sonderkommando Blaich, Hun Airfield, Libya, January 1942. This is the sole marking option provided on the decal sheet in the kit. The aircraft is in a camouflage of a base of RLM 79 (sand-gelb/sand-yellow) with spots of RLM 80 (olivgrun/olive-green) on upper surfaces and RLM 78 (hellblau/light-blue) on under surfaces. The aircraft carries the call letters KG + EM in black on the fuselage sides and under the wings. On the left side of the cowling is a white circle that has a walking pilot figure, carrying a bomb under his left arm and walking atop a black circle with the word EFTA over EINAR in white on it. Just behind the wingroot on the left side also is a very faded illustration of a map of Africa.

This scheme is repeated, again, on a side panel showing profiles of both sides in color. These illustrations are labeled with the RLM numbers needed for the camouflage and the numbers of the decal markings. Most of the colors are also called out in the Humbrol brand paint numbers too.

The box says that the kit is a Weekend Edition . I assume that they mean that it can be built in a weekend.

The  other side panel says that the kit was made in the Czech Republic and Eduard’s street address there is provided. The kit is said to be suitable for modelers over 14.

Inside the box is a sealed cello bag containing 3 olive drab trees of parts and a clear parts tree that is in its own sealed cello. The instructions and decal sheet complete the kit’s contents. The decal sheet has a sheet of tissue on it’s face to protect it from scratching.

The instructions consist of a single sheet that is folded in the center to create 4 pages of 8 ¼ x 5 ¾ format.

Page one begins with the parts trees illustrations and a listing of Mr. Color, Hobby Color and Mr. Metal Color brand paints – suggested for use to complete the model. This is followed by Attention (general instructions) in English, Czech, German and French. The bottom of the page has international assembly symbol explanations in the same 4 languages. Some of the parts on the parts trees illustrations are shaded out, meaning that they are excess and not needed to complete the aircraft.

There is no history of the Bf 108 provided in the instructions.

Pages two through four have numerous exploded assembly drawings, but none are numbered. Colors are called out in each assembly as needed. There is a nicely detailed engine provided in the kit, but the cowling is solid, so it would take surgery to open it up to see the engine. The engine could need some wiring and plumbing by the super-detailest amongst us too. The cockpit interior is very nicely detailed. However, the clear canopy is one solid mold and would also take surgery to have it open to see what’s in the cockpit. The dashboard is provided as a decal. It would have been nice if Eduard had provided this as a PE part with a photo-negative for the instrument faces. Eduard does make an after-market set (no. EDU48392) sold separately, that does provide this and other details.

Eduard markets a second kit of the Bf 108 as the In foreign Service kit (no. EDU 1101). It has decal markings in it for: the Manchurian Airways, the Spanish Nationalist Air Force (Franco’s gang), the Bulgarian Air Force, the Yugoslavian Air Force and the Romanian Air Force. 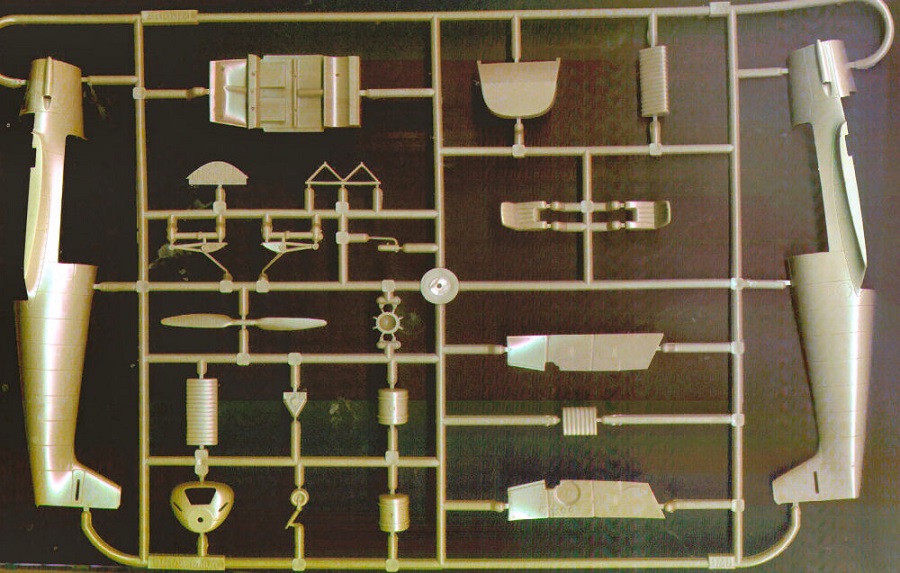 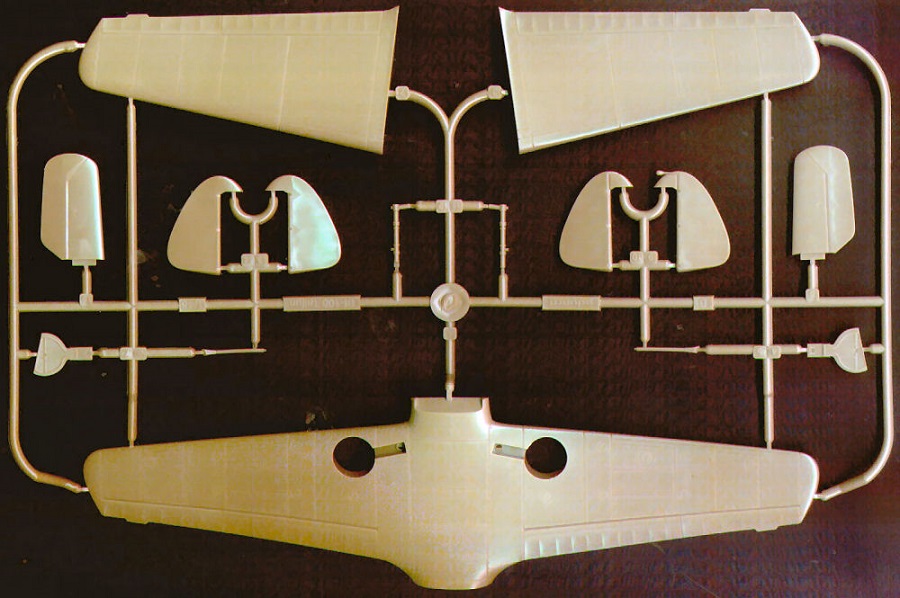 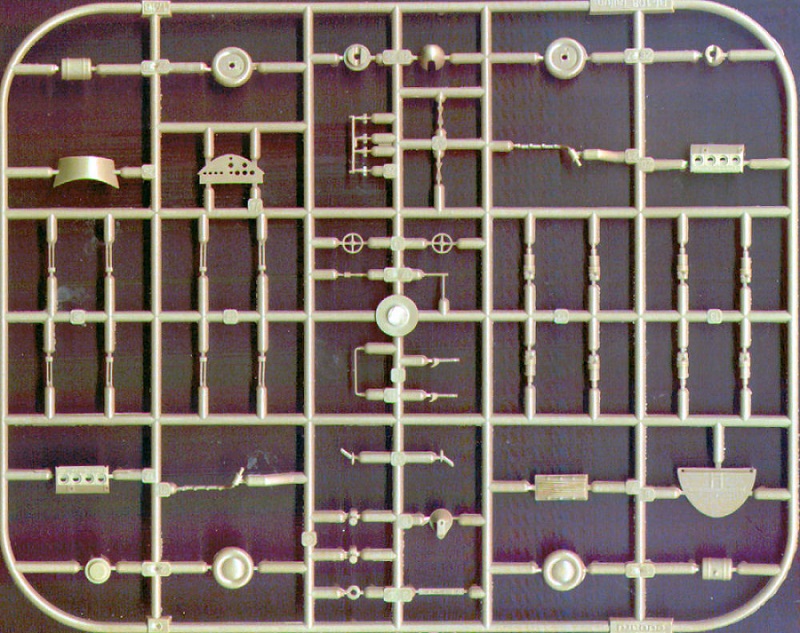 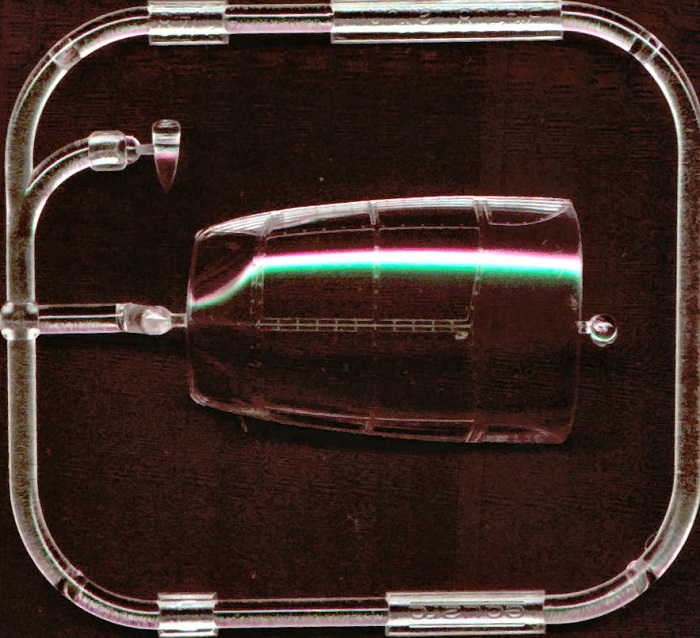 The decal sheet already described above completes the kit’s contents. As already mentioned the box art is to be used for the painting and marking guide. This is not repeated in the instructions.

The decal sheet also has the fuel grade stencils and swastikas for the tail on it. However, the swastikas are done in halves and you have to assemble them. This is to get around the symbol restrictions in Germany to be able to sell the kit in that country. 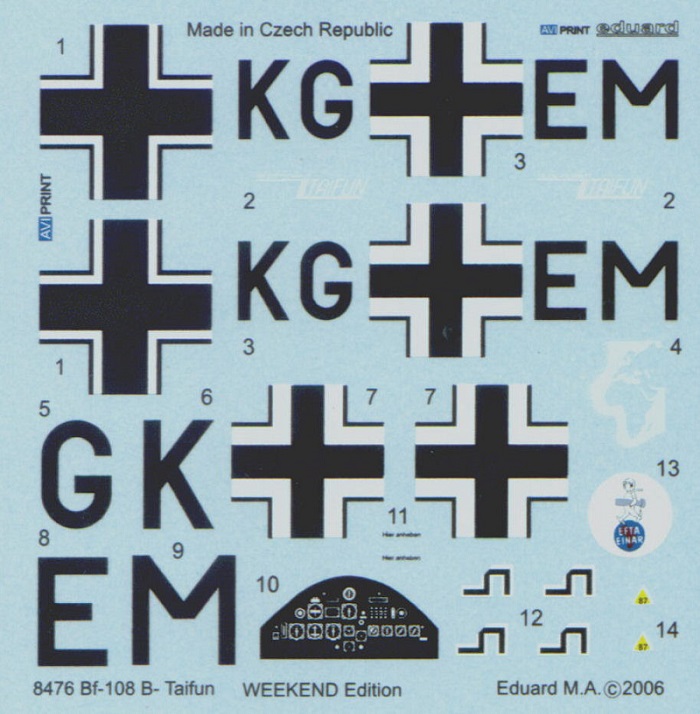 This is one neat kit, with lots of detail. All surface detail is of the engraved variety. It is just too bad that the cockpit transparency is not in a couple parts to allow it to be posed open. The after-market PE set that Eduard sells to go on this kit (and the In Foreign Service kit) will turn this model into a real show stopper. My only other lament is that there could have been more than one marking option provided. Otherwise, highly recommended.