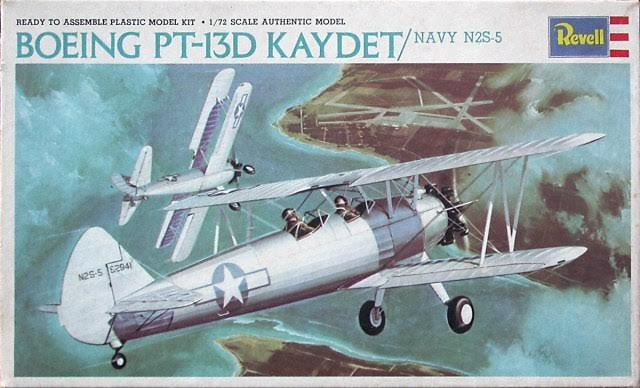 The Stearman (Boeing) Model 75 is a biplane used as a military trainer aircraft, of which at least 10,626 were built in the United States during the 1930s and 1940s. Stearman Aircraft became a subsidiary of Boeing in 1934. Widely known as the Stearman, Boeing Stearman or Kaydet, it served as a primary trainer for the Unite States Army Air Force, the United States Navy (as the NS & N2S), and with the Royal Canadian Air Force as the Kaydet throughout World War II. After the conflict was over, thousands of surplus aircraft were sold on the civilian market. In the immediate postwar years they became popular as crop dusters, sports planes, and for aerobatic and wing walking use in air shows.

Both companies produce all manner of model subjects in the popular scales.

This kit came in a tray and lid type box that was not shrink-wrapped, but held shut with tape. The box is 1+inches too long.

The box art shows 2 Kaydets flying over an island air field. Both are all white with stars with bars on fuselages and wings. The nearest Kaydet has a black N2S-5 on its rudder.

One side panel has 3 color box arts of other aircraft kits that Revell markets: a Grumman F4F-4 Wildcat, a Bell P-39 Airacobra and a Nakajima Kayabusa. No kit numbers are supplied for these 3 kits and I assume they are all to 1/72nd scale.

The other side panel has a one-paragraph history of  the Kaydet.
​WHAT'S IN THE BOX:

This kit contains one chalk-white tree that is folded over, a clear tree, decal, loose lower chalk-white wing and display stand bottom and instructions.

The instructions consist of a single sheet folded in the center to create 4 pages in 6" x 6" page format.

Page 1 begins with a small black and white photo of a Kaydet sitting in front of a hangar. Next to this is the history of the Kaydet, the copyright date of the kit of 1965 and a street address for Revell (G. B.) Ltd. in the UK. Sheet is printed there.

The bottom of the page has a 4-view and a side profile for 2 schemes.

1. Kaydet with the U.S. Army Air Force. It has a windsor blue fuselage and chrome yellow wings, elevators and rudder. It has early war U.S. stars on blue circles with red circle in center of star.

The rudder fin has horizontal red and white stripes on it. It has large black U.S. ARMY under the lower wings.

2. The profile is of the box art's U.S. Navy version. it has a black cowling show here, US NAVY in black on the fuselage sides and the rudder.

No units are identified for these 2.

Pages 2 and 3 have 3 assembly steps on them with text to walk modelers through the builds.

Page 4 has a lot more text instructions in French, German a language I don't recognize.

One half the chalk white parts tree that I seperated into 2 trees holds: the propeller, a fuselage half, wheels, elevators (7 parts) 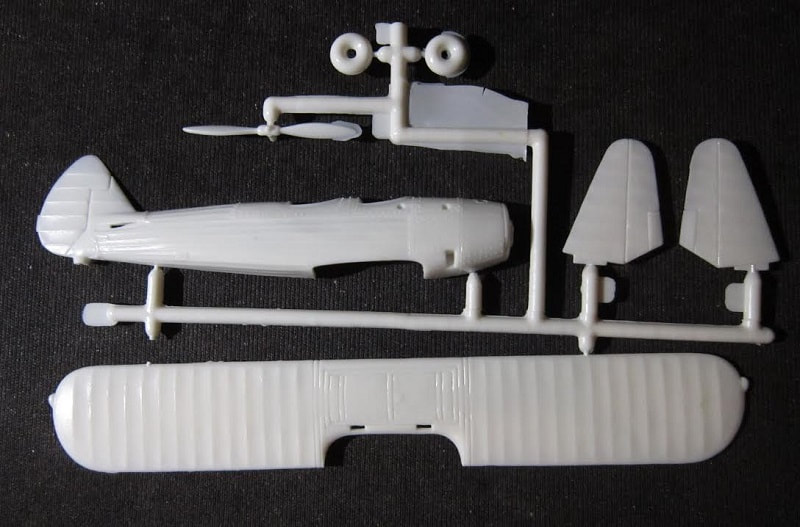 ​Other chalk white half holds: other fuselage half, cylinders, pilot figure, seats, structs, display stand upper section etc. (19 parts)
​One set of wing struts is missing in my kit....sigh. I will have to make a replacement out of stretched sprue. 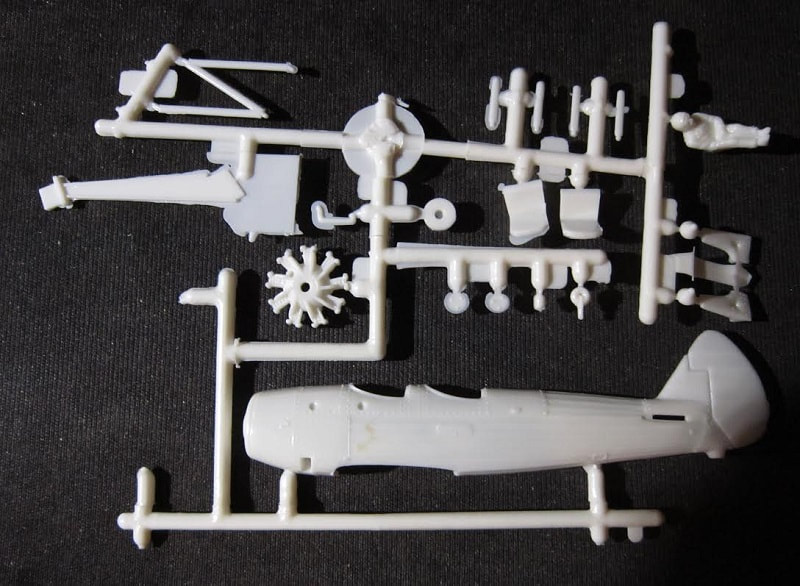 ​The 2 chalk white wings are loose, as is the display stand bottom part. 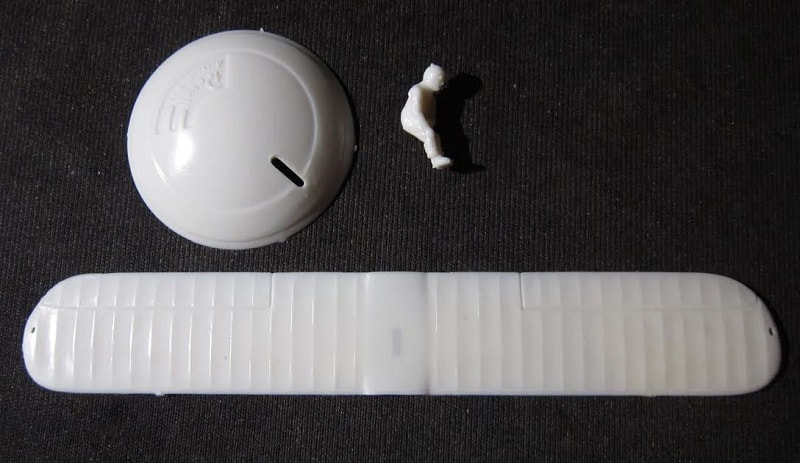 ​Control surfaces are molded solid and the panel lines are of the raised variety.
The clear parts tree holds the 2 windscreens. 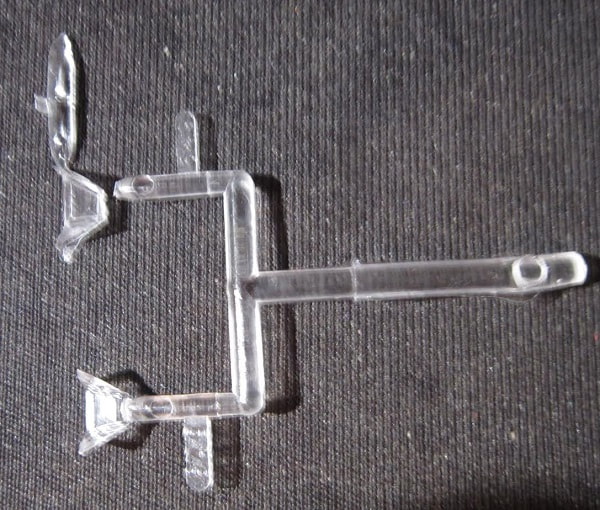 ​The decal sheet came with a frosted sheet intended to protect its face from scratching. However, it was loose in the box and floating around loose and not protecting a darn thing. So, I stapled it to the decal sheet. 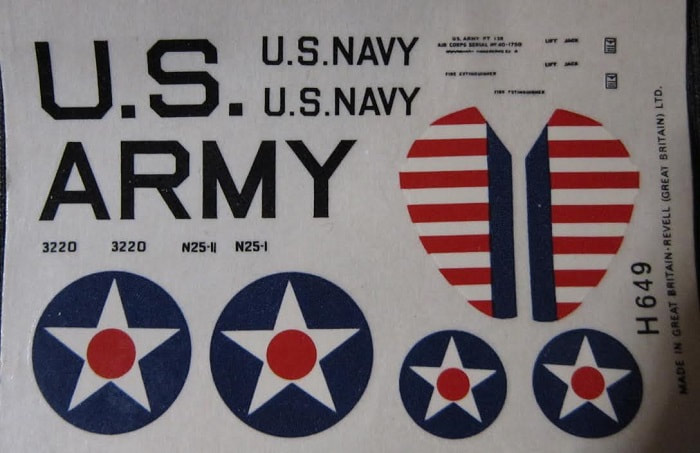 There are no parts trees illustrations in the instructions and the parts trees have no number tabs on them next to the parts. This is going to create extra work to get the right parts for assemblies. Bad move Revell.

This is a nice older kit of a biplane. I am no fan of biplane kits because I abhor doing rigging.

​According to a red price sticker still on the box I paid a whopping .98 cents for this kit back in the 60's. I am willing to sell it for a decent offer.