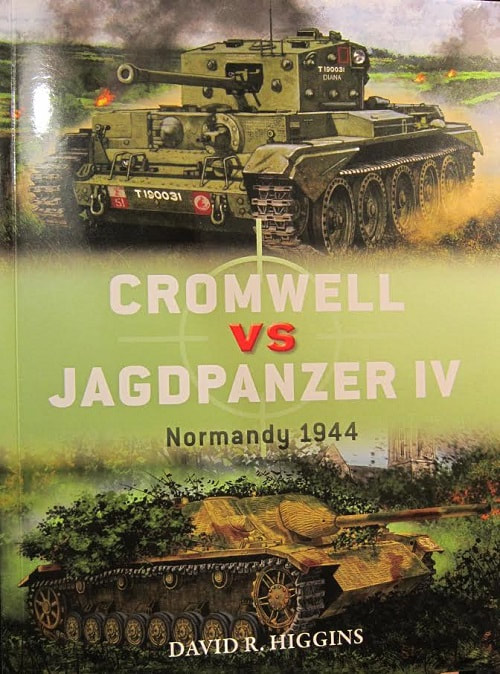 By 1944, the evolution of armoured doctrine had produced very different outcomes in Britain and Germany. Offering a good balance of speed. protection and firepower, the British Cromwll tank could move much more quickly than its German opponent, but the Jagdpanzer IV tank destroyer had a high-velocity main gun and a lower profile that made it formidable on the defensive, especially in ambush situations.

The two types would fight in a series of bloody encounters, from the initial days of the struggle for Normandy through to its climax as the Allies sought to trap their opponents in the Falaise Pocket.

The cover art shows a color illustration of a Cromwell moving across a grassy field with columns of back smoke in the distance behind it. It is overall green with a light colored rectangle with a black deers head on it at the left on the nose, over a yellow stenciled 51. There is a white serial no. T190031 in the center and a yellow circle with a black girbil rat on it on the left. The white serial no. is repeated on the turret sides over a yellow "Diana".

At the bottom of the cover is a color illustration of a Jagdanzer IV, also on a grassy field. It is in a base of earth yellow with dark-green wave pattern. It is covered in zimmerit anti-magnetic mine paste and camouflaged with sections of brush. No markings are seen.

The author, David R. Higgins is the author of several military history books, including 5 previous titles for Osprey's Duel series. He has also written nearly 50 article for magazines such as Strategy & Tactic, Armchair General, World of War and Modern War, and has appeared on television's "Greates Tank Battle". He lives in Columbus, Ohio.

The illustrator for this book is Johnny Shumate. He works as a freelance illustrator living inj Nashville, Tennessee. He began his career in 1987 after graduating from Austin Peay State University. His greatest influences are Angus McBride, Don Treiani and Edouard Detaille.

Johnny completed the battlescene, target views and cover illustrations for this book.

Born in Malaya in 1949, Alan Gilliland studied photography/film and architecture, and spent 18 years as the graphics editor of the Daily Telegraph. He now writes, illustrates and publishes fiction as well as illustrating for a variety of publishers. Alan completed the three-way views, ammunition views and cutaway illustrations for this book.

In side the front cover there are 6 black and white cover arts of other titles in the VS series by Osprey:

Inside the back cover there is 6 more black and white cover arts of other Osprey books:
Caen 1944, Falais 1944, Operation Totalize 1944, Sturmartillerie & Panzerjager 1939-45, Cromwell Cruiser Tank 1942-50 and British Tank Crewmen 1939-45
​This book will be of great interest to both AFV enthusiasts and modelers alike.

I want to thank the folks at Osprey for this review sample.

All of their book titles can be seen on their web site at:
www.ospreypublishing.com