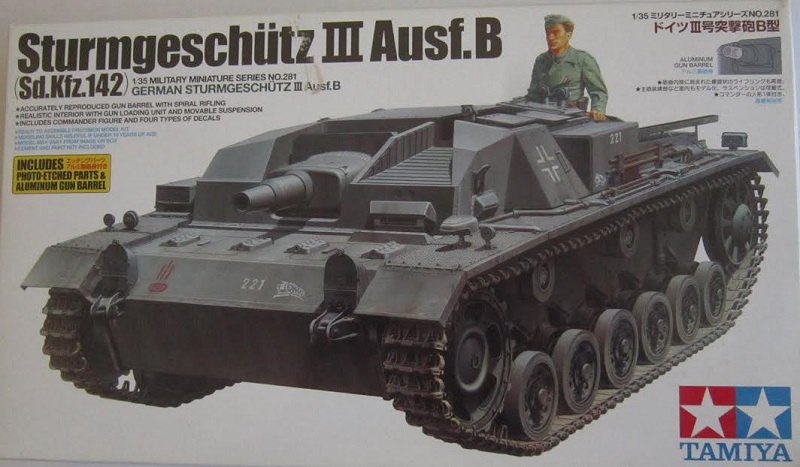 ​In 1936, a proposal was made for a Sturmgeschütz (assault gun) to be used as an armored infantry support vehicle. Such a vehicle would be an essential part of Germany’s new Blitzkrieg “Lightning War” strategy, which emphasized mobility, speed and striking deep into enemy lines. Daimler-Benz AG began development in 1936, and based the chassis design on the Panzerkampfwagen III tank, while Krupp was in charge of building the gun and turret.

The first prototype 0 series, completed in 1938, was praised for its fixed monoblock turret which reduced overall height, improving defensive ability. The Stug III Ausf.A first production model was based on the Panzer III Ausf.F chassis with a short-barreled Stuk37 75mm L/24 gun mounted in a superstructure. Although a rotating turret was not necessary, the 75mm gun did have limited 30 degree horizontal and vertical traverse.
Armor measured from 50mm on the front and 30mm on the sides, thicker than most tanks at the time. Thirty Stug III Ausf.A assault guns were completed by May, 1940 and quickly were sent to France. The first truly mass-produced model was the Ausf.B (subject of this kit). It featured the improved Maybach HL120TRM engine and ZF SSG77 transmission for a top speed of 40Km/h. Further improvements were made to the tracks and wheels during the production cycle, with 250 Ausf.B’s completed between June 1940 and May 1941. Seeing action in the Balkan campaign and Operation Barbarosa, the Ausf.B was widely respected, both for the reliable direct fire support it provided and for the ability to face such formidable Soviet tanks as the T-34 and KV-1.

The kit comes in a tray and lid type box. The box art shows a Stug. III Ausf.B in the markings of the 2nd Kompanie, 228th Stug.Abt., Poland 1941, with a commander standing in the roof hatch opening (one of the marking options offered on the kit’s decal sheet). A side panel shows a 3-view of a Stug. III Ausf.B of the 2nd Kompanie, 191st Stug.Abt., Greece, April 1941 (also on the decal sheet).

The box art shows the tank in overall Panzer-gray with white skeletal type German cross on the sides of the hull, a white 221 followed by an illustration of a tank on a hill that is on the right side of the bow and the hull sides. A tank commander is standing in the top hatch

One side panel shows a 3-view of a sturmgeschutz in overall Panzer-gray with a large thin skeletal German cross on the sides of the hull, a small skeletal cross on the left rear and tactical sign in yellow on the right front fender and the left rear fender. The caption says it is a vehicle with the 2nd Kompanie, 191st StuGAbt (Assault Gun Battalion) Greece, April 1941. This is followed by the copyright date of 2005, MADE IN JAPAN and Tamiya’s web address.

​The other side panel has a color photo of the model made up showing it from above with the roof removed to show the interior detail. This is followed by a paragraph in Japanese, then a photo of the steel PE fret and turned gun barrel in the kit and another paragraph in Japanese. Tamiya’s office address in Aliso Viejo, CA and their address in Japan are provided.
Printed on top of the tray inside is IMPORTANT INFORMATION CONCERNING THIS KIT in 13 languages, including English.
​WHAT’S IN THE BOX:

​The kit comes in a shrink-wrapped tray and lid type box and contains a hull bottom tub piece with raised lettering inside it that gives the copyright date of 2005 and access panels molded on the bottom of this part are excellent.

​There are 7 parts trees molded in dark gray, 4 steel rods with loops on each end (to use for torsion bars), 4 black vinyl poly-caps, black vinyl rubber band type treads, a turned- steel gun barrel with spiral rifling inside it, a fret of brass PE, the decal sheet, instructions and a separate 4 page marking and painting illustrations folder with 5 different markings shown.

The brass PE fret and the gun barrel are sealed in clear film in a triangular cardboard shelf in one corner of the box.

​I bought an after-market set for this kit by Bagherra brand in resin. It contains supplemental armor, spare ammo and a wood crate (5 parts) 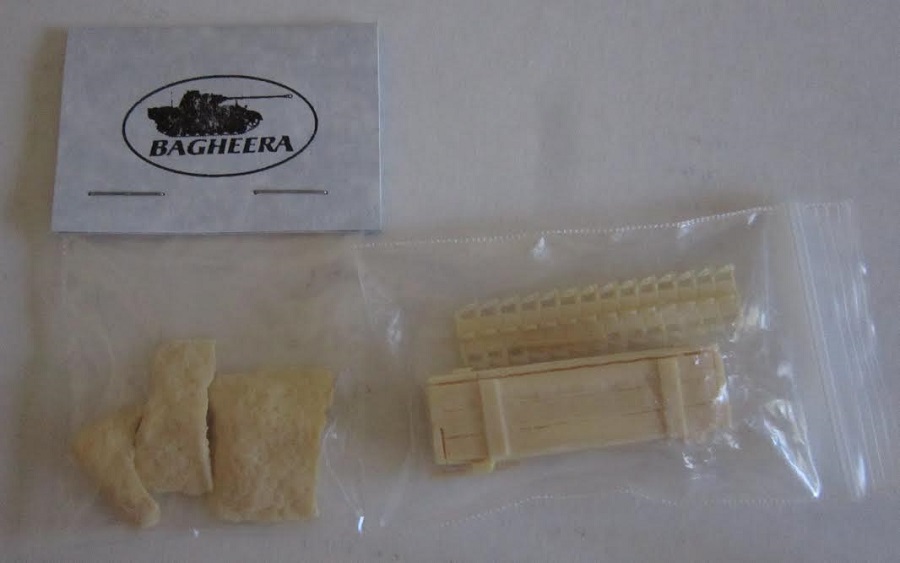 ​The instructions consist of a single sheet that accordion-folds out into 10 pages in 6 ¾” x 10 ¼” page format.
Page 1 of the instructions begins with a black and white repeat of the box art, followed by the history of the Sturmgeschutz III Ausf. B in English, German, French and Japanese.

​Page 2 begins with READ BEFORE ASSEMBLY instructions, CAUTIONS, illustrations of tools to use for assembly, general assembly instructions in English and Japanese. The bottom of the page has the first assembly step drawing.

​Page 3 through 9 have a grand total of 19 assembly steps.

Page 10 has painting and decal application instructions in English, German and French. A after market service card is at the bottom of the page, to mail to Tamiya for any parts replacements.
The 4 page marking and painting instructions are printed on slick coated paper in full color. 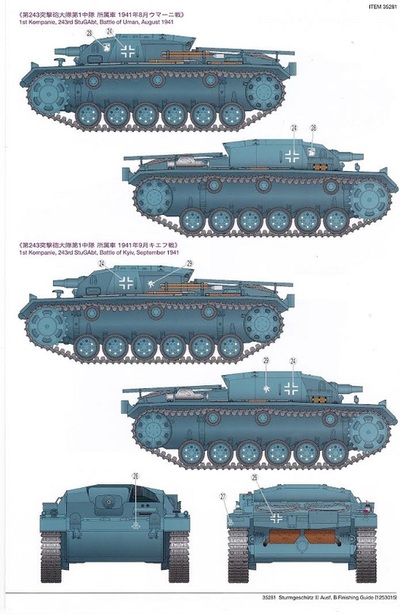 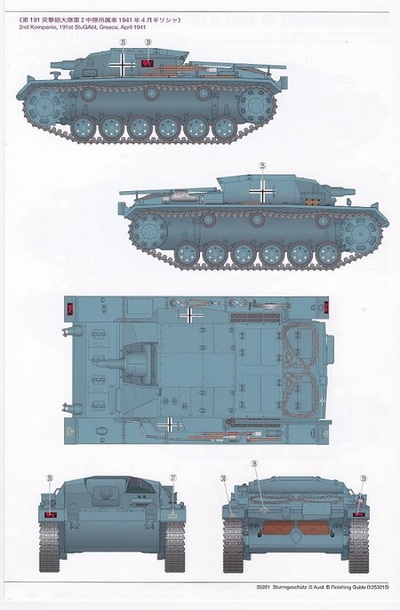 Markings are given for five schemes:
All schemes are in overall panzer gray.
There are no part tree drawings in the instructions.
​There are two identical letter A parts trees. These are co-joined to the letter E trees. Letter A trees hold: the shock absorbers, return rollers, road wheels and their axles, idler wheels, drive sprockets, fender braces, forward hatch doors, small lamps, lift rings and tow shackles (53 parts per tree). Step 19 of the instructions says that 25 of these parts, per tree, are not needed to complete the kit and are excess. 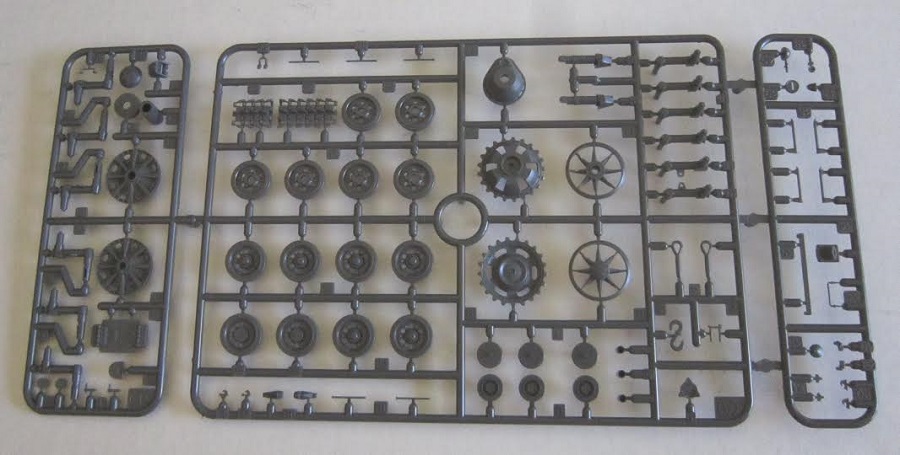 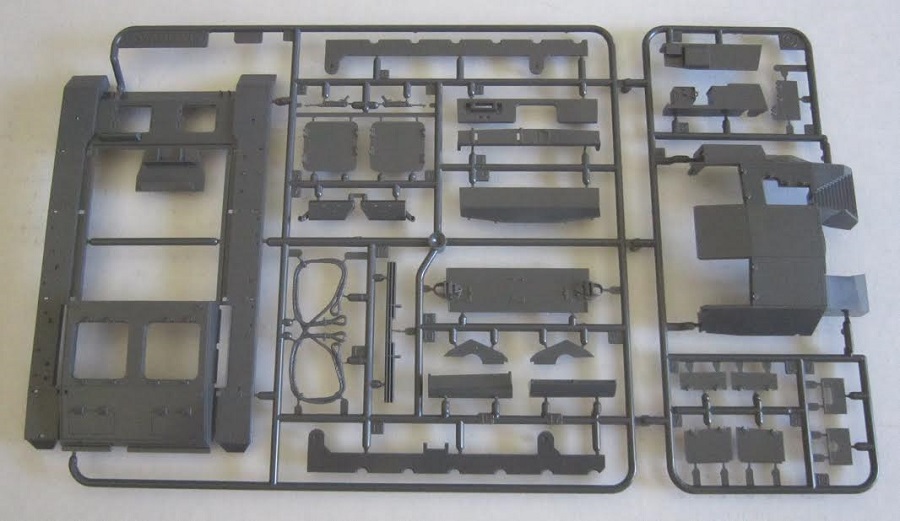 Tree letter D holds: tools, Notek lamp, tow point parts, interior details, gun breech, commander figure etc. (71 parts). This kit has very nice fighting compartment interior detail. It is a great beginning and super-detailers will probably want to embellish on it further. However, I wonder how much of it can be seen through open roof hatches? 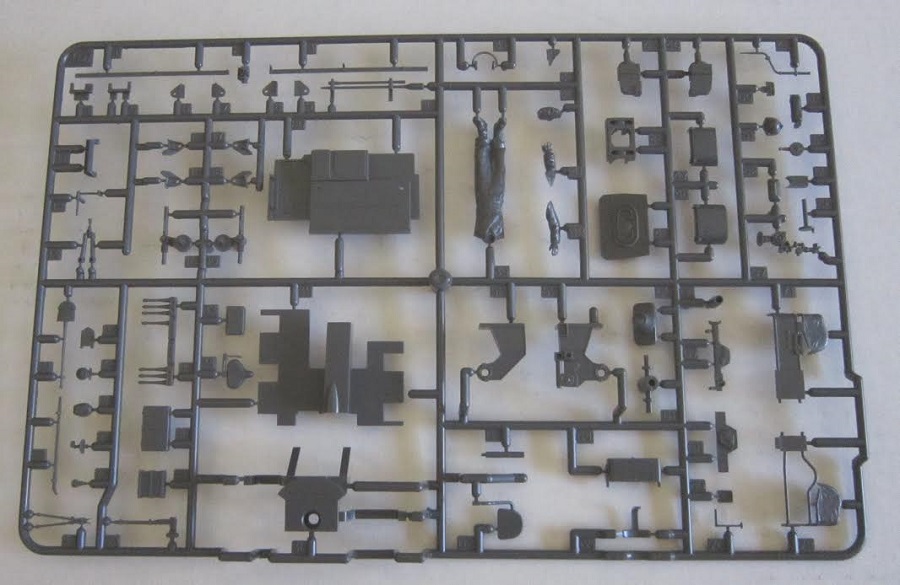 There are four black vinyl poly-caps provided. The two larger of these are to go inside the final transfer covers to hold the drive sprockets in place. The two smaller ones are used as retainers in the main gun trunion. 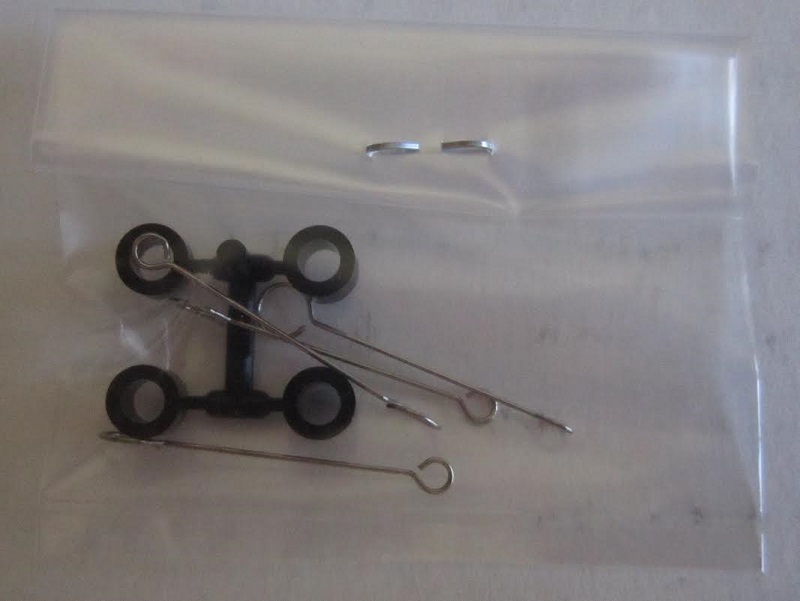 Two runs of black vinyl tracks are of the glueable type. Liquid cement, like Tenax 7R, will weld them. Detail is good inside and out on these. Some of us will probably opt to buy an aftermarket set of Pz.Kpfw.III individual links however.

​There is a short turned-steel barrel. Tamiya says it has been treated with an anti-rust preparation and should be thoroughly washed before you use it. It is also threaded inside with the rifling. Kudos to Tamiya for that. 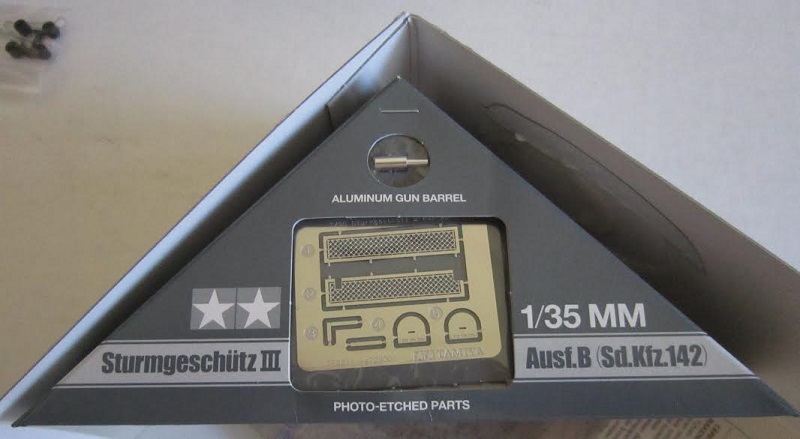 The final item in the kit is the decal sheet. 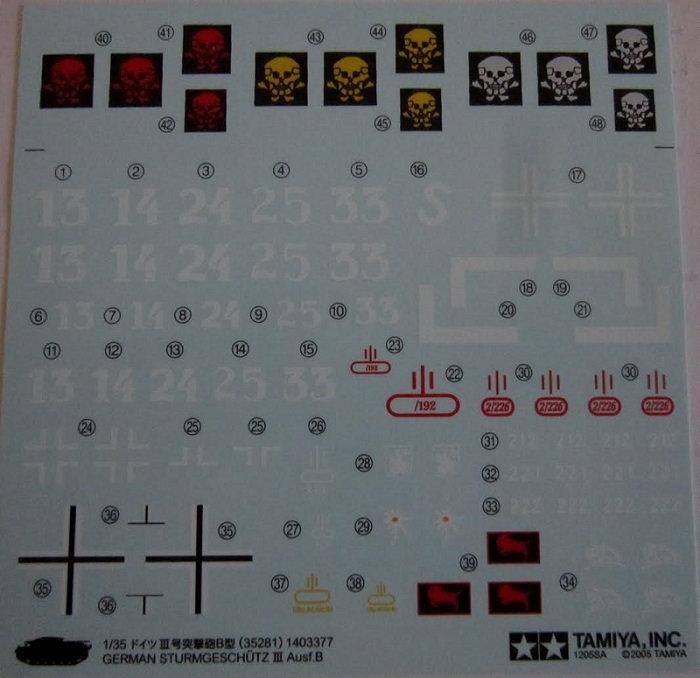 ​Although the kit has some neat interior detail, a side panel of the box shows a finished model with the roof removed to show this off. I fear that may be the best way to display the inside of this kit to show it all.

I recommend this kit to all German WWII armor modelers.

​I purchased my kit in April 2007 with a discount coupon off the internet for Hobby Lobby. I paid $26.99 for it then. Nice to get a bargain once in while and Hobby Lobby runs these printable coupons on their web site constantly.