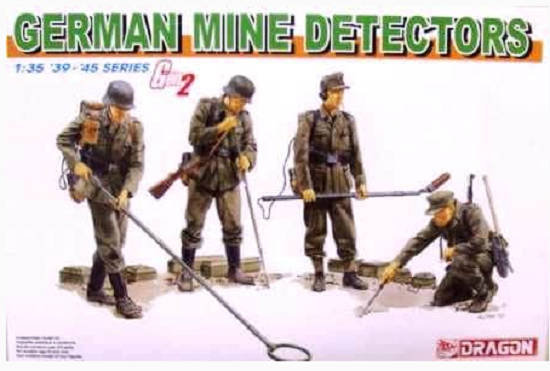 The box art shows a four man German Mine Detector Team posed against an all-white background. Similar to how Tamiya brand does the majority of their box arts also.

The men are all in field-grey uniforms with two of them wearing steel helmets and the other 2 men wearing soft cloth peaked field caps.

Two men wear black jack boots and the other two have their trousers bloused above low shoes.

Reading left to right the first man is holding a Aachen 40 mine detector probe, headphones and a electronics case. He has rifle ammo pouches, a bayonet in its scabbard, a canvas pouch and a canteen on his belt and a leather pouch slung over his right shoulder.

Behind him on the ground there are 2 M1938 anti-tank mines.

The 2nd man to the right is holding a mine probe rod 39.

Behind him on the ground there are 2 long TMD-1940 wooden anti-tank mines.

He has a 98K rifle slung over his right arm, a canteen, ammo pouches, bayonet in scabbard and a canvas sack on his belt.

The 3rd man to the right is holding a Wien 41 mine detector, that is wired to an electronics case slung on his back and to headphones he is wearing. He has a bayonet in its scabbard, a control box, ammo pouches, canteen and a canvas sack on his belt.

Behind him on the ground there are 2 T-IV anti-tank mines and 2 PMZ 1940 anti-personnel mines.

The fourth man is kneeling on one knee. He is digging with a short mine probe rod and has a longer one slung on his back. He has a 98k rifle over his right arm. There is ammo cases, a canteen and canvas sack on his belt.

It also says here that there are BONUS Red Army mines in the kit.

​The other side panel begins with a black and white illustration of slide molded weapons with astonishing detail, seperate parts for bolt mechanism and accurate ammo clips for the 98K rifles that have hollowed out muzzles.

This is followed by a photo of the brass PE fret in the kit. It holds parts for the headphone straps, shoulder boards, insignias and medals.

Kit is not suitable for children under 3 years, because of small parts, said in multiple languages, including English.

The kit is intended for modelers age 10 and over.

Copyright of the kit is 2005 and DML's address in Hong Kong, China and their web address is provided. Kit was made in Hong Kong.

The bottom of the box has a color guide and parts numbers for assembly. 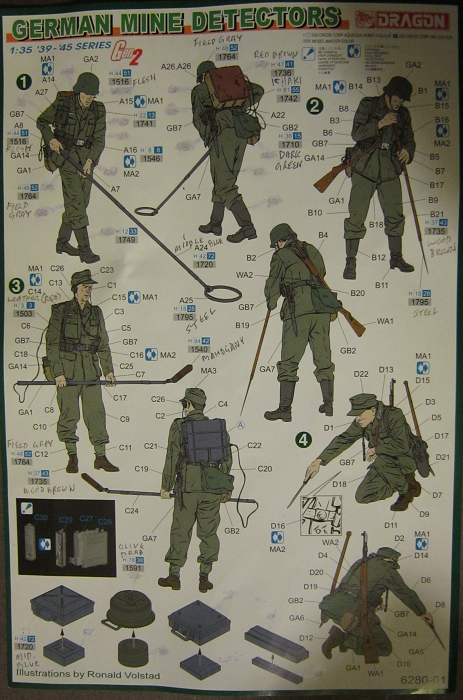 ​Trees are alphabetized, but with odd letters. They are not illustrated in the instructions. They do, however, have part number tabs next to the parts on the trees. 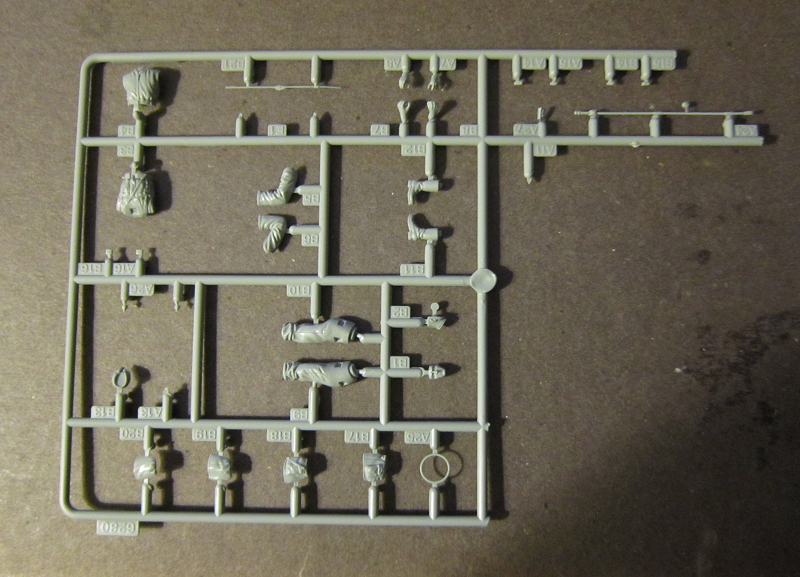 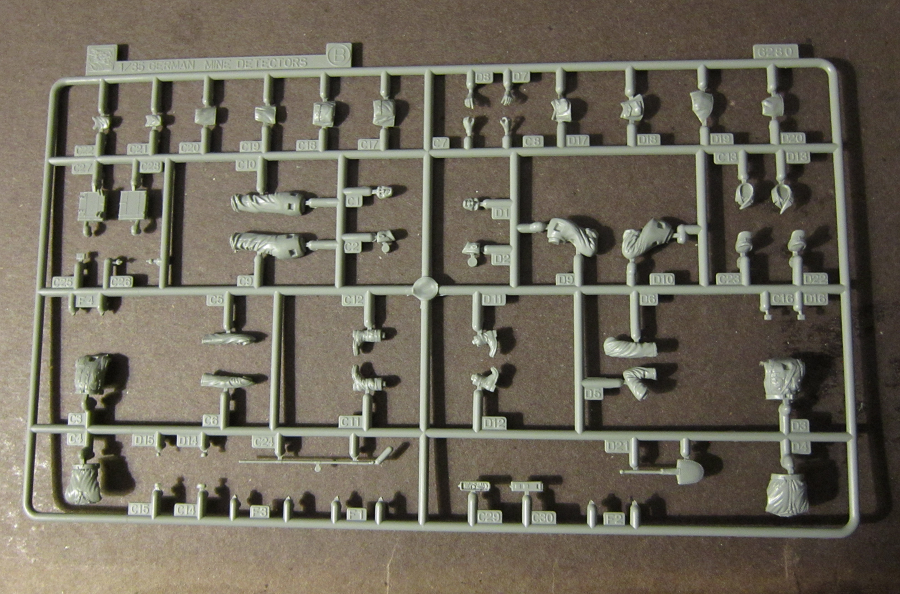 ​Medium-grey letter GA tree holds: 6 canteens, 6 steel helmets, 12 mine small pressure plates, 6 bayonets in scabbards and one out of its scabbard, 6  canteens, 6 shovels in carrying cases, 6 mess kits closed and two of them open with seperate lids, 6 metal drinking cups, 6 gas mask canisters and a pair of binoculars (63 parts) 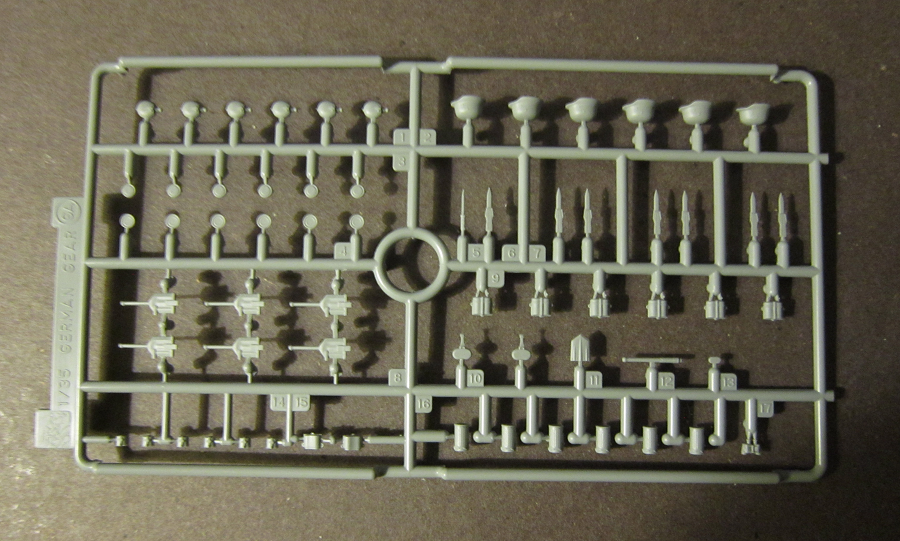 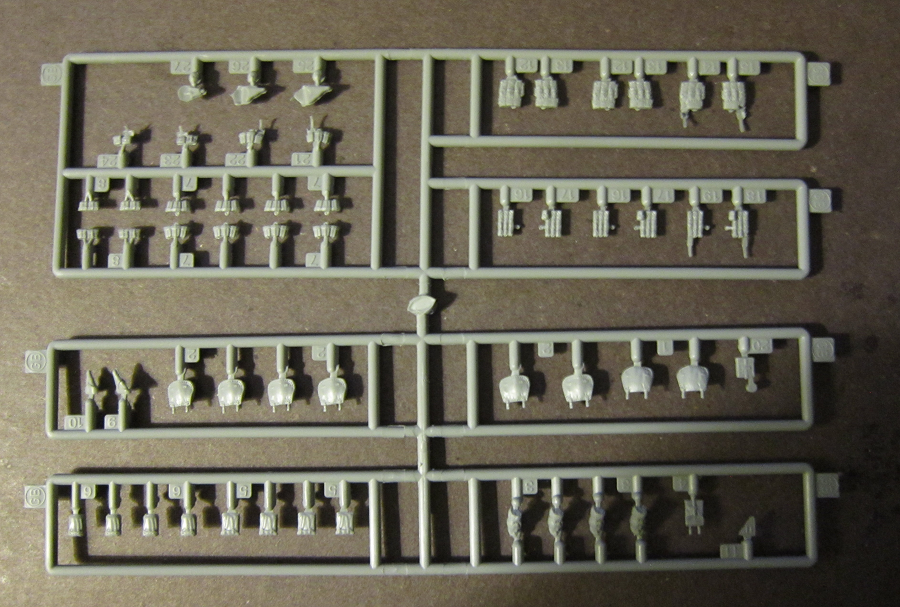 ​The small light-grey letter WA tree holds: 2 98k rifles and 4 bolts for them and 14 ammo cases for the rifles (18 parts)
​Next is the brass PE fret (already described above) (21 parts)

​Seven mines have broken off one of the trees and I have assembled one figure, all but his hands, helmet and any field gear etc.

This is very nicely detailed kit and will make up into an interesting diorama.

However, I have yet to discover what tree the BONUS Soviet mines are on that the side panel mentions?