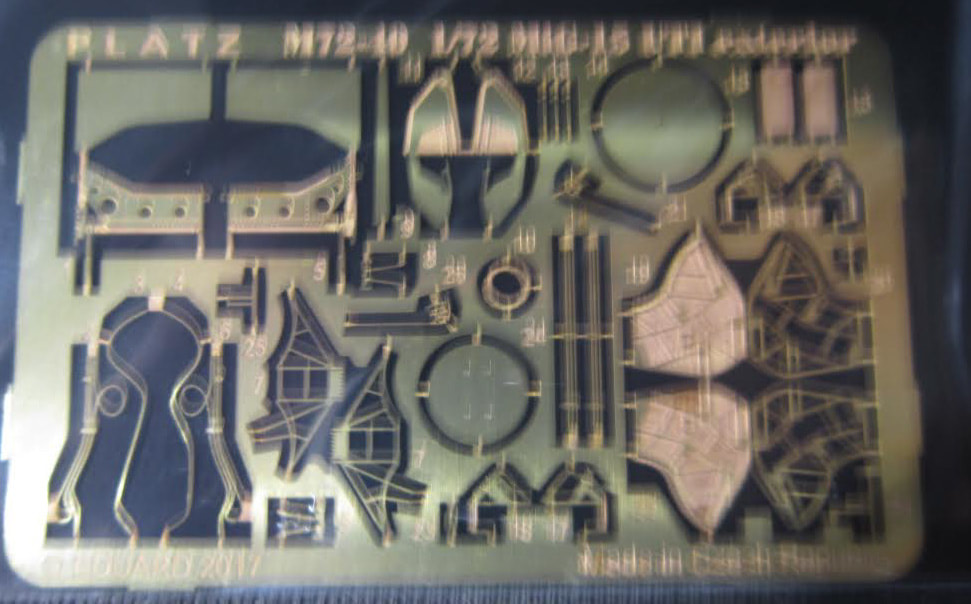 MSRP: Unknown. I could not find this product listed on Platz's web site. It may be a new release for them.
Platz sent me this PE set and 2 others (to be reviewed here soon) and a set of canopy masks for their Mig-15UTI kit which they also sent me a sample of (reviewed elsewhere here under
AIRCRAFT.

This brass PE fret comes in a sealted cello bag with card at the top with a hole in it to allow the product to be displayed on a hook at a hobby shop.

The instructions consist of a single sheet in 8 1/4" x 11 3/4" format printed on both sides and folded several times to fit the cello bag.

The instructions show 13 assembly drawings that are not numbered. Platz's street address in Shizuoka City, Japan, it's telephone and FAX numbers are provided as well as its web address.
Eduard's name is shown here too.

Eduard is based in the Czech Republic.

The PE set is a cooperation between the two companies, because the fret has "Eduard 2017 & Made in Czech Republic" etched into the it.

That is if you can even handle them at all. The smaller parts aren't much wider than a human hair.

I had some other PE sets from Eastern Europe years ago that were over-egineered and had many microscopic parts that were impossible to pick up or glue to anything other than your fingers.

The large parts are useful though.