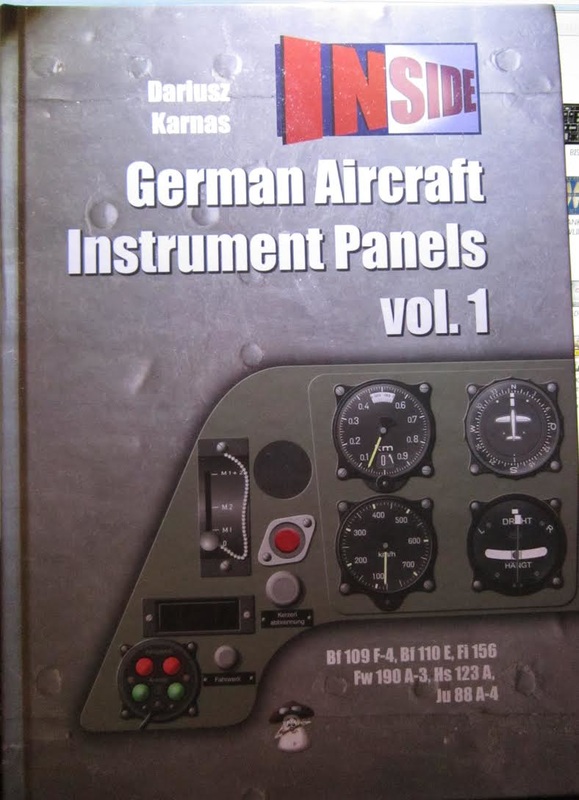 Mushroom Model Publications (MMP) is based in the U.K. All their books are printed by their associate Stratus in Sandomierz, Poland in the English language. Stratus also does their own line of books in both English and Polish.

You have to turn the book ¼ of a turn to read the pages that are printed across the height of the pages, instead of across the width like normally.

Remaining pages have large color illustrations of each individual instrument etc. These illustrations are all in color. A short paragraph or two gives the history of the aircraft.

This section also has a black and white illustration out of a tech manual of the armament and gunsight that was in the Bf-109F and a 2-view color illustration of that Revi C/12C gunsight.

This followed by the color illustrations of the instrument panel and instruments etc.

This is followed by the color illustrations of the instrument panel and instruments etc.

This is followed by  black and white illustration out of the tech manual of the Revi 3a gunsight used in this aircraft and a color illustration of it.

The fourth aircraft featured is the Messerschmitt Bf-110E. The short history starts the section with a head on photo of a Bf-110E-2 of III/ZG 26 that was captured by the Allies in Libya. It is sitting on the ground. A black and white photo of the cockpit, looking forward from the observer’s seat is shown from a tech manual.

The fifth aircraft featured is the Focke Wulf Fw-190A-3. This section also begins with the short history, followed by a black and white photo of a Fw-190A-3 in the Netherlands, summer 1943, sitting on the ground running it’s engine up. A photo of a Fw-190A-3 cockpit, was taken after German pilot A. Faber mistakenly landed his plane at RAF Pembrey on 23 June 1942.

The sixth aircraft featured is the Junkers Ju-88A-4. The section also begins with the short history of the plane, followed by a black and white photo of the cockpit interior and an in-flight shot of a Ju-88A-4 of II.KG 30.

In addition to the instrument panel and instruments illustrated in color there are two photos of the Stuvi 5B bomb-sight used in the Ju-88.

I want to thank Dr. Roger Wallsgrove, Editor-in-Chief of MMP and the folks at Casemate Publishing who sent me this review copy.

Casemate is the N. American distributor of MMP books in Pennsylvania. All MMP books can be seen on their web site at: