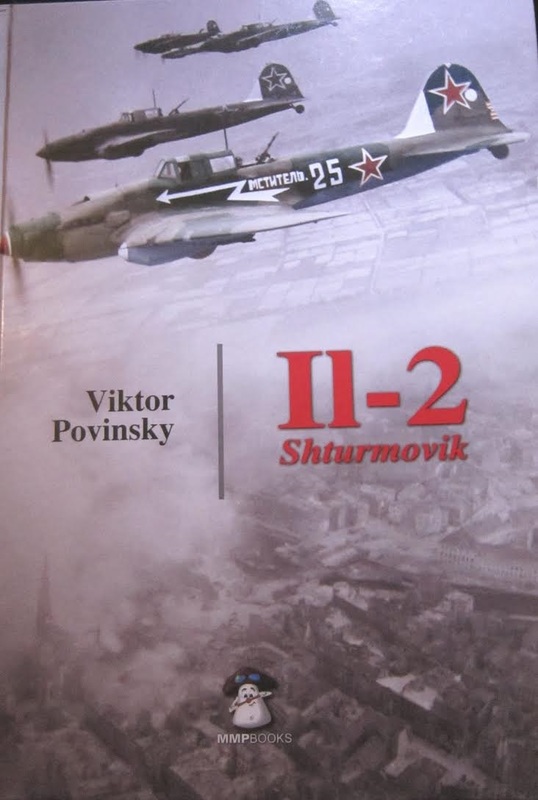 Mushroom Model Publications (MMP) is located in the U.K. They have all their books printed in Sandomierz, Poland by their associate Stratus. Stratus prints books in both English and Polish.

This new book came from MMP’s U.S. distributor Casemate, very carefully packed in 2 padded envelopes one inside the other.

The Ilyushin Il-2 Sturmovik was a ground-attack aircraft  in the Second World War, produced by the Soviet Union in very large numbers. With 36,183 examples of the Il-2 produced during the war, and in combination with its successor, the Ilyushin Il-10, a total of 42,330[3] were built, making it the single most produced military aircraft design in aviation history, as well as one of the most produced piloted aircraft in history along with the American postwar civilian Cessna 172 and the Soviet Union's own Polikarpov Po-2 Kukuruznik biplane, itself sometimes seen side-by-side with the big armored Ilyushin monoplane on the front lines.

To Il-2 pilots, the aircraft was simply the diminutive "Ilyusha". To the soldiers on the ground, it was the "Hunchback", the "Flying Tank" or the "Flying Infantryman". Its postwar NATO reporting name was "Bark".The Il-2 aircraft played a crucial role on the Eastern Front. Joseph Stalin paid the Il-2 a great tribute in his own inimitable manner: when a particular production factory fell behind on its deliveries, Stalin sent an angrily-worded cable to the factory manager, stating "They are as essential to the Red Army as air and bread. "I demand more machines. This is my final warning!".

An illustrated technical history of the most famous Soviet warplane of World War Two, the Il-2 Shturmovik. Built in larger numbers than any other aircraft, the Il-2 ground-attack and close-support aircraft was perhaps the most important aircraft on the Eastern Front in WW2.

The different versions of the plane, from the prototypes to the final aircraft of 1945 are described and illustrated; all the changes in specification, equipment and performance are recorded.

There are 105 black and white wartime photos in the book (including the front cover).

There are 38 line drawings drawings in 1/72nd and 1/48th scales. These show different versions from various Soviet factories, including the single seat, two-seat, ski-equipped and torpedo carrying ones. Also some line drawings of cockpit variants and ordinance. Some of these line drawings are multi-views.

There are 5 data lists and 23 drawings from the original technical manuals, full dimensional details and 112 color photographs of surviving examples preserved in aviation museums illustrate all aspects of the airframe, inside and out as walk around type shots.

There is a color illustration of the cockpit interior and dashboard with a listing of what each and every instrument is. This is followed by 2 more dashboard variant illustrations and an actual photograph of a real IL-2 dashboard.

There are 63 pages of color illustrations in 1/48th scale, some of these are multiple views of the aircrafts illustrated.  They complete the book's comprehensive coverage. About 100 color profiles, counting the different views.

The color profiles showing camouflage and markings applied to the Shturmovik by its users.

This book is the one to have if a modeler is going to build a kit of the IL-2. There is no information left out about this aircraft. The book will interest aviation historians as well.

I want to thank Dr. Roger Wallsgrove, Editor-in-Chief of MMP and the folks at Casemate who sent me this great book

MMP books can be seen on the Casemate web site and their service is great.