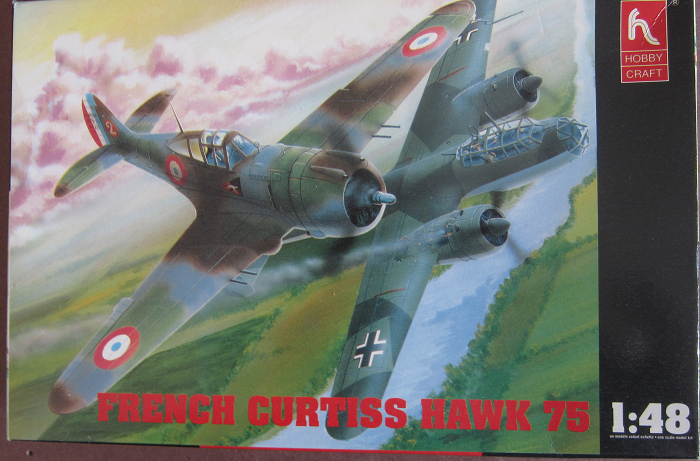 The Curtiss P-36 Hawk, also known as the Curtiss Hawk Model 75, is an American-designed and built fighter aircraft of the 1930s and 40s. A contemporary of both the Hawker Hurricane and Messerschmitt Bf 109, it was one of the first of a new generation of combat aircraft—a sleek monoplane design making extensive use of metal in its construction and powered by a powerful radial engine.

Perhaps best known as the predecessor of the Curtiss P-40 Warhawk, the P-36 saw little combat with the United States Army Air Forces during World War II. It was nevertheless the fighter used most extensively and successfully by the French Armee de l'air during the Battle of France.

The P-36 was also ordered by the governments of the Netherlands and Norway, but did not arrive in time to see action before both were occupied by Nazi Germany. The type was also manufactured under license in China, for the Republic of China Air Force, as well as in British India, for the Royal Air Force (RAF) and Royal Indian Air Force (RIAF).

Axis and co-belligerent air forces also made significant use of captured P-36s. Following the fall of France and Norway in 1940, several dozen P-36s were seized by Germany and transferred to Finland; these aircraft saw extensive action with the Ilmavoimat (Air Force) against the Soviet Air Forces.

The P-36 was also used by Vichy French air forces in several minor conflicts; in one of these, the Franco-Thai War of 1940–41, P-36s were used by both sides.

French orders were taken up by British Commonwealth air forces, and saw combat with both the South African Air Force (SAAF) against Italian forces in East Africa, and with the RAF over Burma. Within the Commonwealth, the type was usually referred to as the Curtiss Mohawk.

With around 1,000 aircraft built by Curtiss itself, the P-36 was a major commercial success for the company. It also became the basis not only of the P-40, but two other, unsuccessful prototypes: the YP-37 and the XP-42.

Hobbycraft of Canada was a model company based in Ontario, Canada. They went out of business.

The box art shows a Hawk 75 shooting down a German Ju-88.

The Hawk 75 is in a wave pattern of dark-brown, green and dark blue-gray over a light-blue under-side.

It has a pennant that is half green and half orange diagonally with a black and white stork on it under the cockpit.

This is followed by a list of the features of the kit: a detailed cockpit and landing gear, engraved panel lines, in multiple languages, including English. Paint and glue are not included.

This kit holds 3 light-gray trees and a clear tree in a sealed clear cello bag, the decal sheet, instructions, a WARNING sheet and 2 cards to mail in to suggest new kits for Hobbycraft to manufacture (one in French and one in English).

The instructions consist  of a single-sheet that accordion-folds out into 6 pages in 8 1/2" x 11" page format.

Page 1 begins with a black and white repeat of the box art, over kit features - detailed cockpit and landing gear, precise moldings and authentic markings in 5 languages, including English, over international assembly symbol explanations and Hobbycraft's street address in Ontario, Canada.

Page 2 begins with READ BEFORE YOU BEGIN instructions, over the first 2 assembly steps.

Page 5 has marking and painting instructions for the box art subject scheme as a 4-view (already described above). 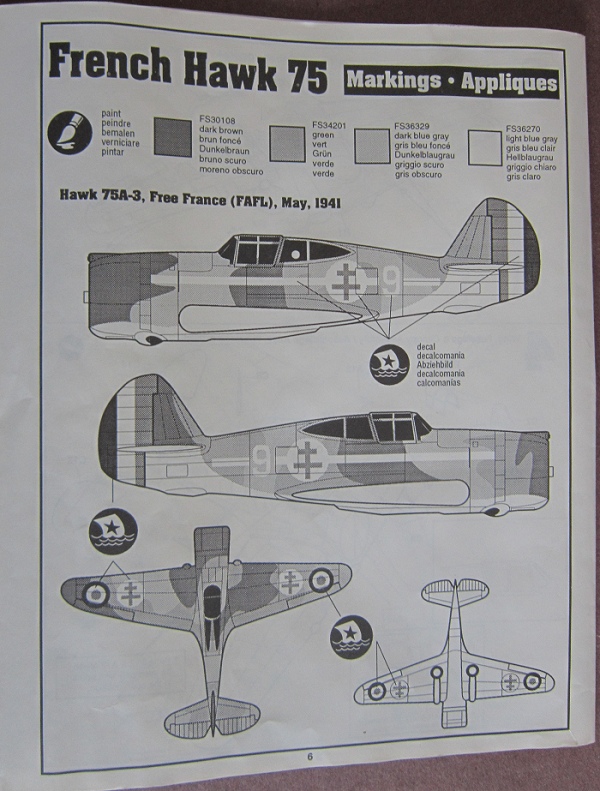 It has a red, white and blue vertical flash on the rudder flap and a white stripe down the sides of the fuselage with a white 9 and a white circle with a blue Cross of Lorraine on it over the stripe.

Parts trees are alphabetized, but not illustrated in the instructions. They do have part no. tabs next to the parts on them. 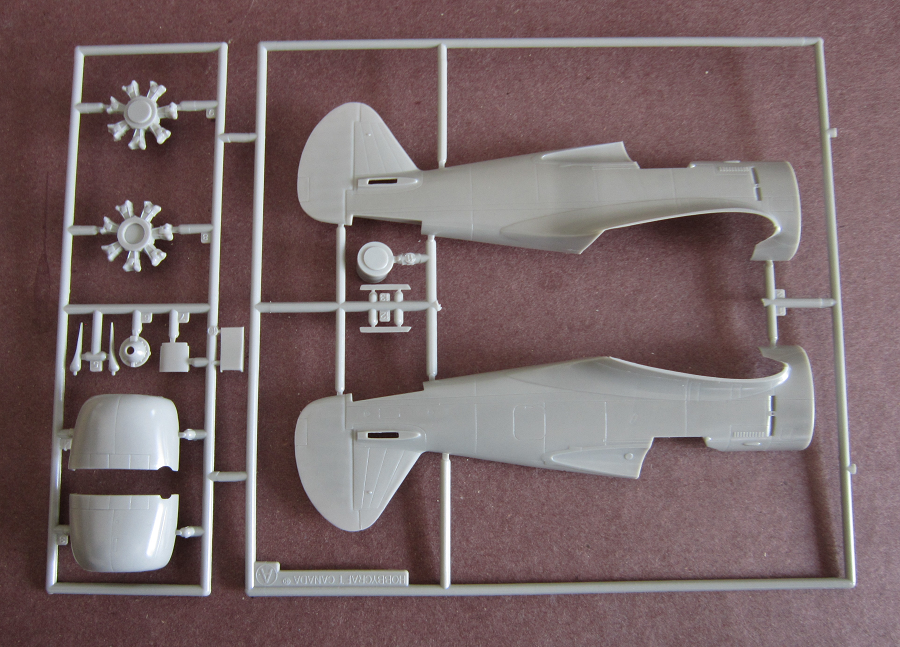 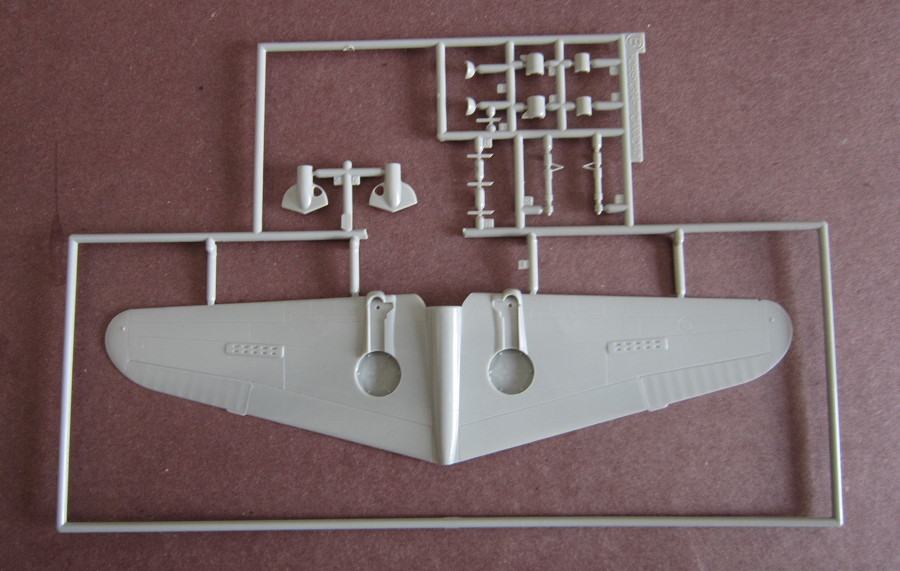 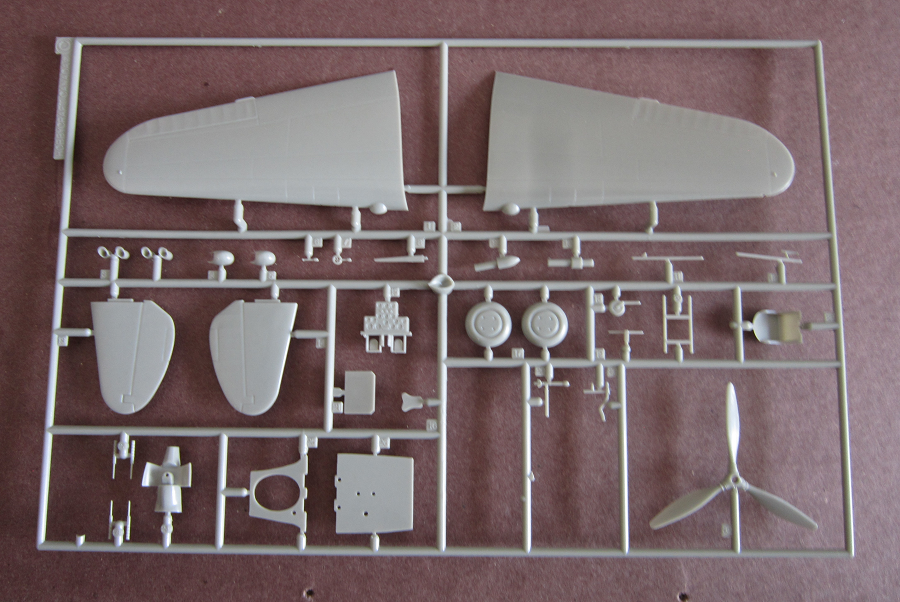 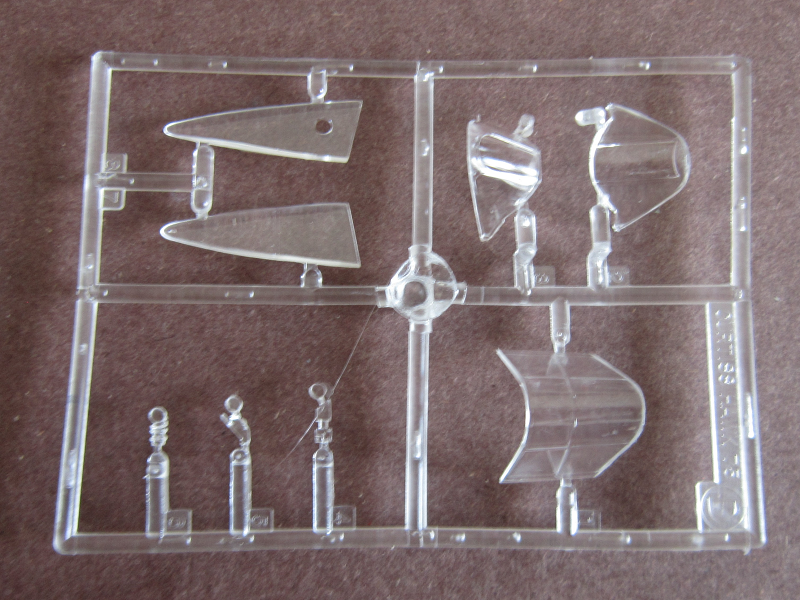 ​The decal sheet and mail in cards complete the kits contents. Model has nice engraved detail, Flaps are all molded solid and there is no pilot figure included. 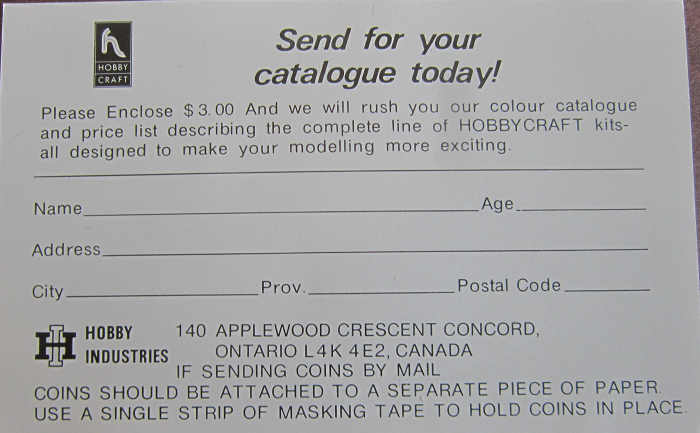 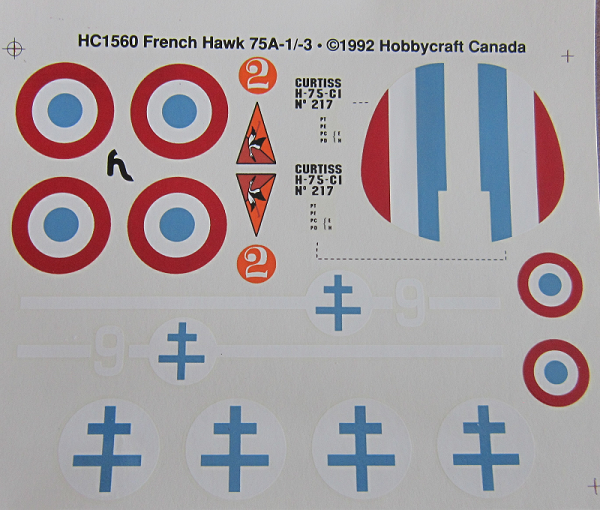 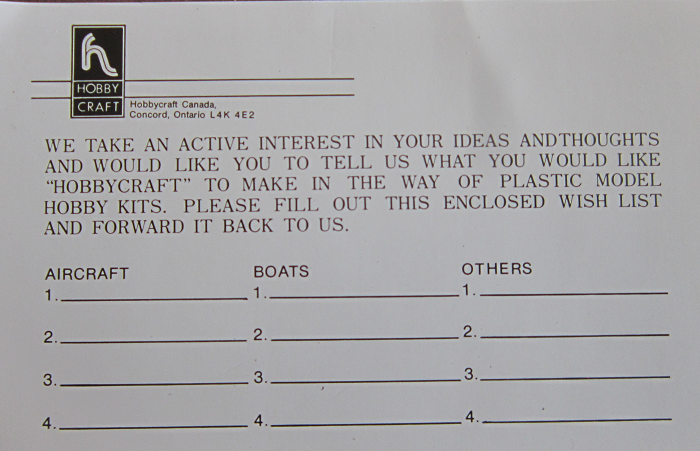