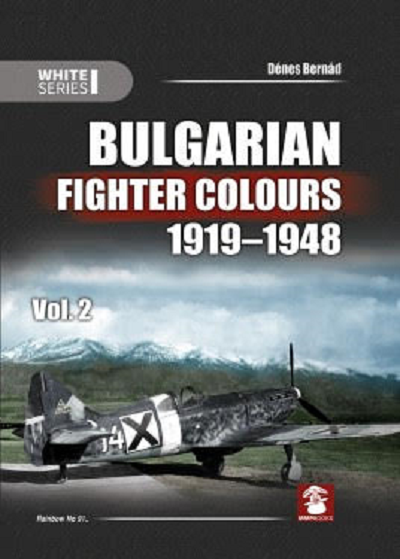 Mushroom Model Publications (MMP) is based in the UK. All their books are printed by their associate Stratus, based in Sandomierz, Poland in the English language. Stratus also does their own line of books in both Polish and English.

Bulgaria is arguably the historically most underrated Axis ally that actually fought the Allies during WWII. Despite remaining outside the main battleground of the war, the Eastern Front, the Balkan country did take its fair share of warfare, particularly due to the combat activity of its fighter air force against the armada of U.S. bombers and their fighter escorts, in 1943 and 1944.

Then, following an about-face in early September 1944, the Bulgarians combatted their former ally, the Germans. This notable air activity is largely unknown outside Bulgaria, and is not very much popularized even within the country, despite fully deserving the utmost attention.

This two-volume book describes and illustrates all the fighter and fighter trainer aircraft used by the Bulgarian armed forces before, during, and shortly after WWII. These aircraft were procured from the following countries: Germany, Poland and Czechoslovakia. Emphasis is placed on the most potent German fighter types, the Messerschmitt Bf-109E and G, as well as the top-notch fighter type of France, the Dewoitine D.520.

However, rare, exotic modes, including the sole locally built prototype that fit the definition, the DAR-5 are also included.

The camouflage and markings, as well as the military coding system of these large variety of aircraft types are described  in great details. Fully illustrated with many rare photos, most of them seen for the first time in print.

There are 23 pages of data lists. A 2 page bibliography at the end of the book.

The profiles each are large and fill the whole page. They are mostly accompanied by a black and white photo of the actual plane that is being illustrated.

Dipl. Eng. Denes Bernad was born in 1964 in Transylvania (Romania), in a family of indigenous Hungarians  He studied at Transylvanian University in Brasov, where he graduated in 1988 as a Mechanical Engineer. From 1992 he lived in Canada and in 2006 he returned with his family to Hungary.

Currently, he works in the automotive industry as Program Launch Manager, He is fluent in three languages His main interest is the military history of Central and Eastern Europe, especially Rumania, Hungary and Bulgaria. His books deal especially with air forces and aircraft of these countries.

He has written or co-authored 17 historical books. Aside from the above books, Denes Bernad has published many studies concerning the history of aviation in Air Enthusiast, Air International and FlyPast (UK), W.W.1 Aero (USA), Avions (France), Repules, Aero Historian and Uj Szarnyak (Hungary), Militaria and Skrzydlata Polska (Poland) and Aeronautica, Aeromagazin and Model-Ist (Rumania).

He is also the founding member of the Asociația pentru Propagarea Istoriei Aviației (ARPIA) – Association for Propagation of History of Aviation (Bucharest, Rumania) and Magyar Repulestorteneti Tarsasag (MRT) – Hungarian Society of Aviation History (Budapest, Hungary). He is also a foreign correspondent of the French aviation.

Highly recommended. This book will be of great interest to modelers and aviation historians alike,

I want to thank Casemate Publishers for this review sample and Roger Wallsgrove, Editor in Chief of MMP.

Casemate is the North American distributor of MMP books and all MMP titles can be viewed on their website at:
www.casematepublishers.com