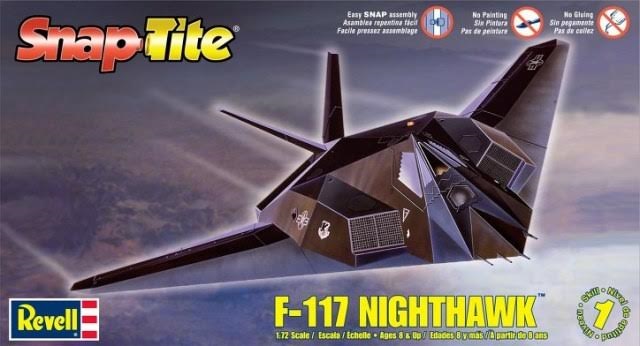 Snap-together kit no. 1182
By Ray Mehlberger

Shrouded in mystery, its very existance denied by the U.S. Air Force, the F-117A was announced in April of 1990 as the world's first operational Stealth fighter. Specifically designed to evade enemy radar by being virtually invisible to emitted radar waves.

The F-117A was designed and constructed by the aviation wizards at the famed Lockheed "Skunk Works". The F-117A has unique flat external surfaces and the advanced airframe relies on non-metalic materials throughout.

The aircraft is a single-place design that is powered by two F-404 turbofan engines. To reduce the infared heat signature and minimize detection, the exhaust outlets are fitted with diffusers that mix cool air with heated exhuast gases to spread and cool the exhuast plume. Armament is carried in an internal weapons bay.

The kit normally comes in a shrink-wrapped tray and lid type box. However, I got my kit handed to me free at a recent IPMS contest where there were a pile of this kit on the kiddie's make-N-take table. A friend of mine in the host chapter gave it to me to pass on to my autistic grandson. Being snap together, it may not be beyond him I hope.

I copied the box art off the internet.
WHAT'S IN THE BOX (ER-BAG):

This sealed cello bag holds 4 jet black trees of parts and a clear part that is tinted yellow in a further small sealed cello bag. A sheet of self-adhering stickers and the instructions complete the kits contents.

The instructions consist of a single sheet that is folded in the center to creat 4 pages in 8 1/2" x 11" page format, folded once again to fit the box (bag)

Page 1 begins with the history of the F-117A, next to a 2-view of the aircraft and an illustration of the logo for the 416th TAC FTR SQDN. "Ghost Riders".

Next is international assembly symbol explanations in English and French, followed by READ BEFORE YOU BEGIN instructions in the 2 languages.

A phone number to call is provided at the bottom of the page to call with any questions or comments and the address of Revell's Consumer Service Dept. in Elk Grove Village, ILL is pr9ovided along with their website address. The copyright of this kit is 2009.

Page 2 to the top of page 4 give a grand total of 6 assembly steps.

The 7th step on page 4 is really a 4-view to use for marking the model. The kit already being molded in black, there is no further painting instructions. A illustration of the display base showing where to put the title sticker is also here. The bottom of the page gives sticker application instructions in English and French.

There is only one real scheme and the bottom half of the sticker sheet has a bunch of hokey other markings a kid can use if he pleases.

This kit is nicely detailed externally for being a snap together kit. Cockpit is very sparse inside, holding only the pilot and the floor. There is no landing gear provided and the model has to be displayed in the flying mode atop the base.

The trees are not alphabetised., but the trees are  numbered and not illustrated in the instructions. You have to go by their names and shapes to get things right. Which really isn't that big a chore. 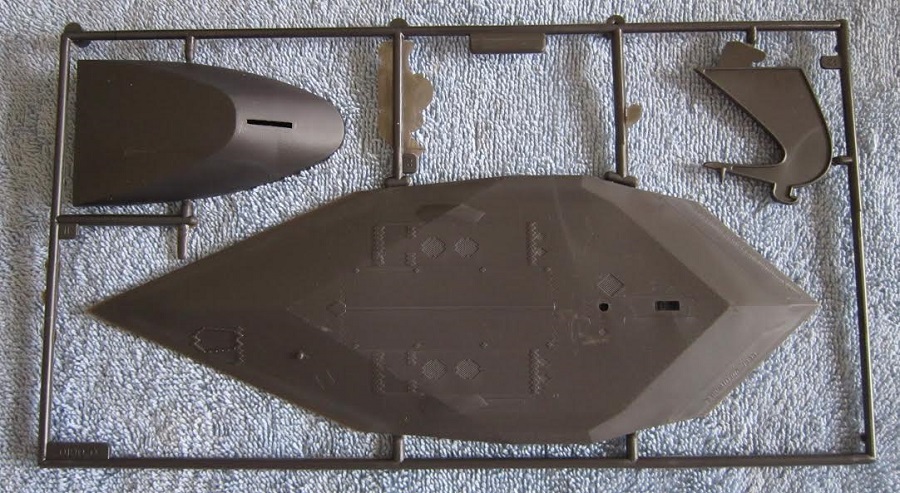 ​The second large jet black tree holds the top of the aircraft, the cockpit floor, the pilot figure, the V-shaped stabilizer  and a washer (5 parts) 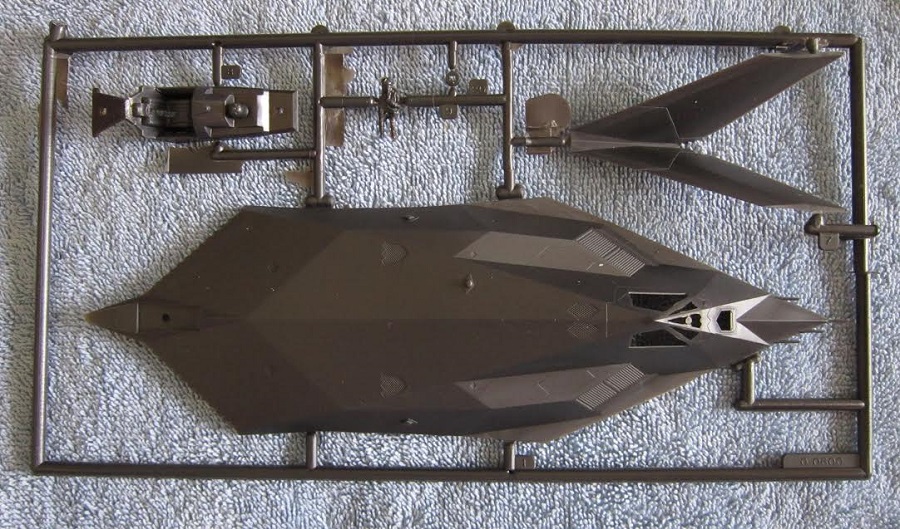 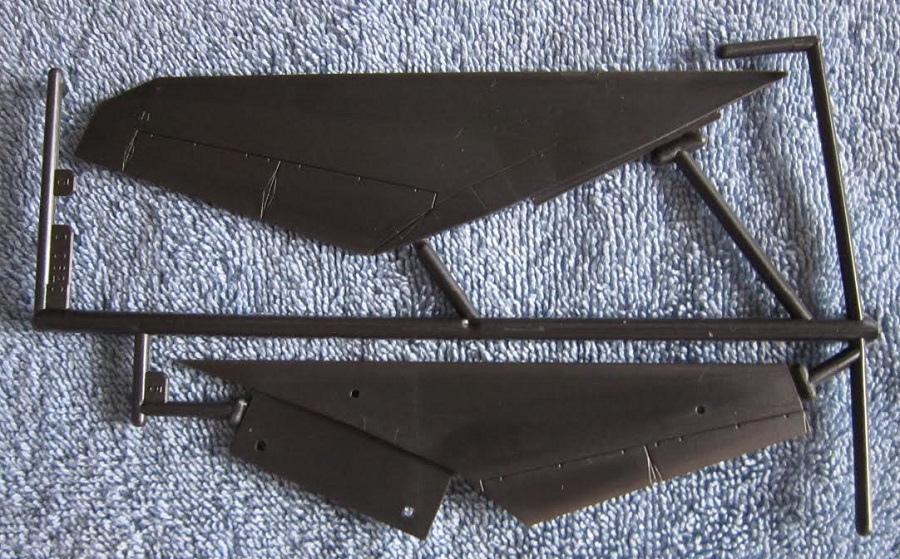 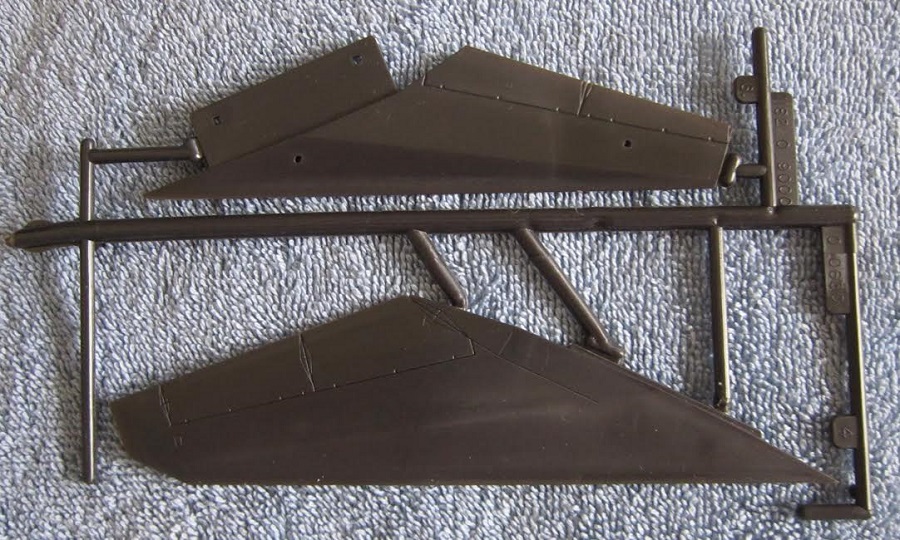 The tinted-yellow part is the cockpit transparency (1 part) 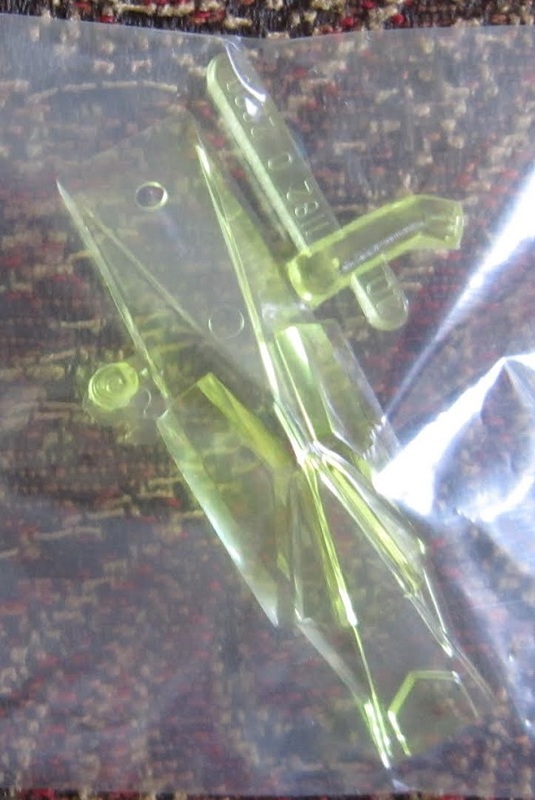 The self-sticking sticker sheet has the markings for an aircraft from the 416th Tactical Fighter Squadron on its top half and hokey markings for the kids on the bottom half, which consist of a skull and crossbones in a yellow circle, a black Eagle's head,Sharks mouths,eyeballs,and lighting strikes. 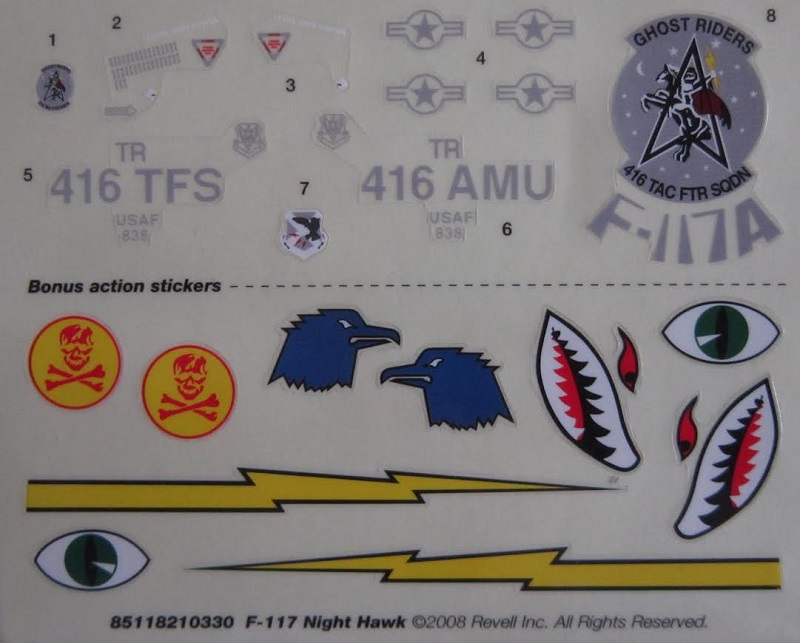