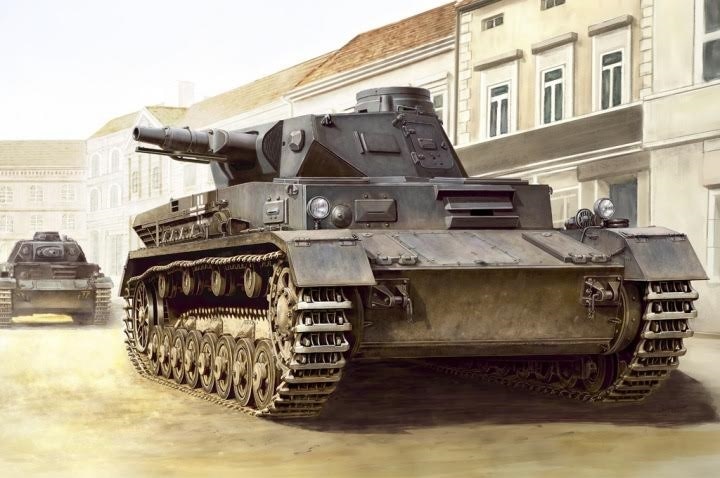 The "Panzerkampfwagen IV" was developed as a 20-ton class medium support tank by Krupp-Grusion and over 12,000 units of "Pz.Kpfw. IV" were produced from October 1937 to the end of the war as a prime tank.

Panzerkampfwagen IV Ausf. C's were produced using (3.Serie/B.W.). As with the Ausf A through E were armed with a short 7.5cm tank gun and a MG34 in the turret. In the Ausf B and C, a vision port and a pistol port replaced the machine gun and its ball mount in the superstructure front plate.

Onlyh 134 of the Panzerkampfwagen IV Ausf C were completed from October 1938 to August 1939. In August 1039, six of the 3.Serie/B.W. chassis were assembled and converted to bridge-laying tanks.
​
THE KIT:

Hobby Boss is a prolific model company based in China. They make all manner of model subjects in the popular scales.

This kit comes in a very sturdy shrink-wrapped tray and lid type box.

The box art shows 2 Pz.Kpfw. IV Ausf C's parked by a building. Both are in overall panzer grey and only the closest one shows any marks, which is just a white skeletal German cross on the sides of the hull.

One corner of the box art says the kit is for modelers 14 years old an up. It is a detailed scale kit for adult collectors to assemble. The actual model may vary from the image on the box.

One side panel has a color side view of a Pz.Kpfw. IV Ausf C in overall panzer grey with the white skeletal cross on the sides of the hull. This is followed by the history of the tank, MADE IN CHINA and the copyright date of 2015. Hobby Boss's web address is provided here also.
​The other side panel has a color illustration of the decal sheet and the brass PE fret in the kit. This is followed by 2 color illustrations of box arts of kits of other variants of the Pz.Kpfw. IV:

​This is followed by the statement that the kit IS NOT A TOY. It is suitable for ages over 14 only (in 10 languages, including English). It is not for children under 3 years, due to small parts. The main material is PS plastic.

A white sticker on the end of the box says that the kit is distributed by MMD Squadron in Texas.
​WHAT'S IN THE BOX:

This kit contains a whopping 56 tan trees of parts, 2 clear trees, a length of copper wire (to make tow cables out of), a brass PE fret and the decal sheet in 20 sealed cello bags.

Hobby Boss's web address appears at the bottom of the page.

There is a Master Tools brand catalog in the kit as a slick coated accordion folded sheet of 8 pages in 8 1/2" x 11" in color. Also included are flyers for other Hobby Boss kits. 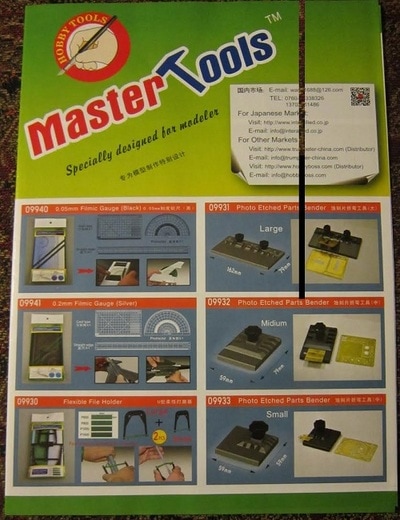 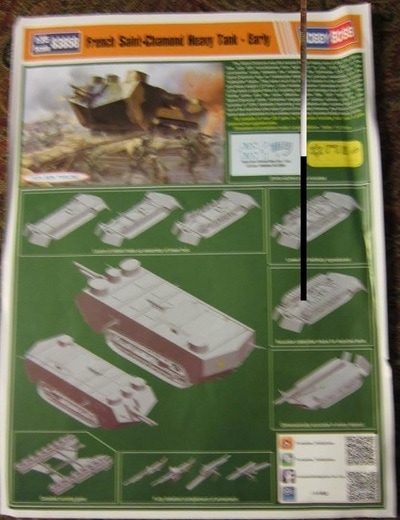 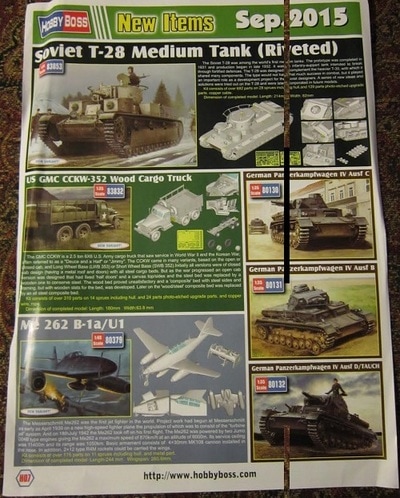 Page 1 of the instructions begins with a black and white repeat of the box art, followed by PLEASE READ BEFORE OPERATION and decal application instructions in English and Chinese.

Pages 2 and 3 have the parts trees illustrations on them.

Page 4 has international assembly symbol explanations at the top, over the fist 2 assembly steps.

Pages 5 through 10 give a balance of a grand total of 11 assembly steps.

Page 11 has a 5 view of a Pz.Kpfw. IV Ausf C in overall panzer grey with a white skeletal German cross on the sides, front and rear of the hull and a solid white cross on the top of the turret. The right side of the turret front has a white divisional marking of a white oak leaf. On the turret sides is the white number 832.

This tank is with the 1st Panzer Division, France 1940.

Below this is decal application instructions again and a paint color listing of Tamiya and GSI Creos paints.

Page 12 has 4-view at the top of a Pz.Kpfw. IV Ausf C. Again in overall panzer grey, with a white skeletal German cross on the sides of the hull and the rear. It has an upside-down letter Y in white as the divisional sign on the right side of the turret front and a black plate on the hull sides that has the white number 322 on it.

Below this is a 3-view of a Pz.Kpfw. IV Ausf C . It too is in overall panzer grey with a black German cross outlined in white on the hull sides and the rear of the turret.  A white no. 623 is in front of the hull sides cross.

This tank is with the 2nd Panzer Division, Balkans 1941.

The bottom of the page repeats the decal application instructions and the colors list.

The Tristar name is apparent on some of the sprues, and the box art is the same as Tristar’s original release back in 2003, although it no longer features the blue scroll with the words “Limited Edition”; I’m not sure how limited that run was, but in any case, it is now back.

As the second of Tristar’s early Pz.Kpfw IV kits, following the D, a few parts are marked as unused, and it will pay to note that some of the unused parts have only very minor differences from the parts that are to be used.

It would be too daunting for me to name every part in the kit. Please look at the parts tree photos to see what's there.

Four main sprues A – D hold the generic early Pz.Kpfw IV parts.
​Hull sides and ends are on sprue A 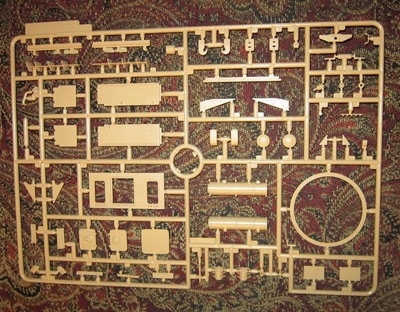 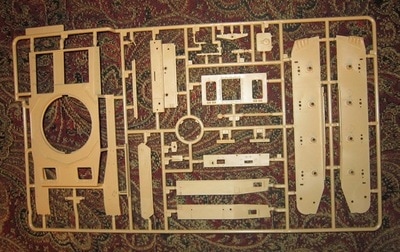 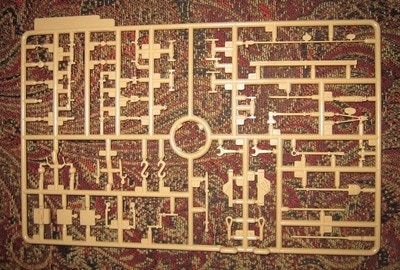 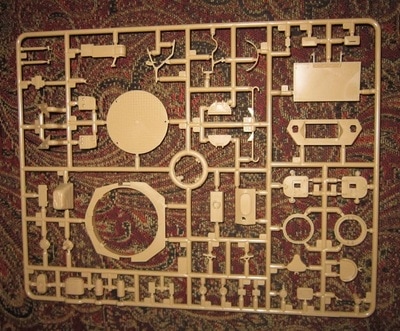 ​Sprue E1 is the internal bracing for the hull bottom, F. 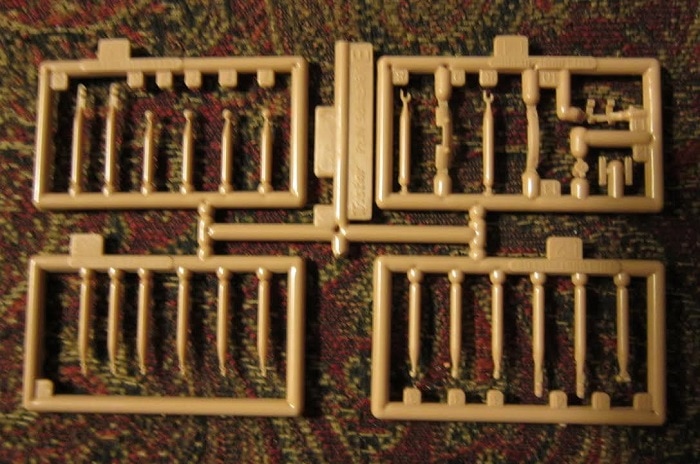 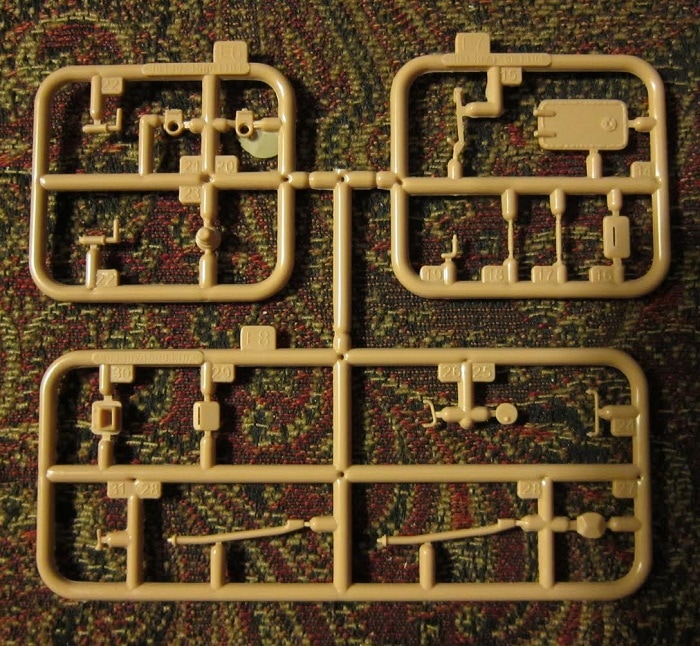 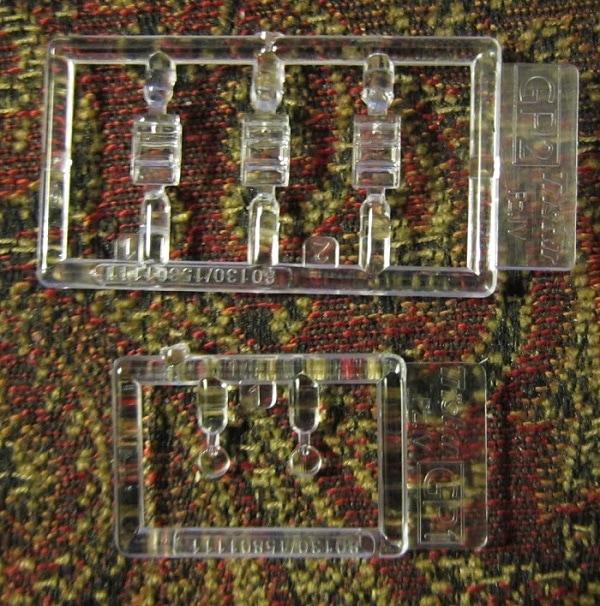 ​Sprue H is the turret 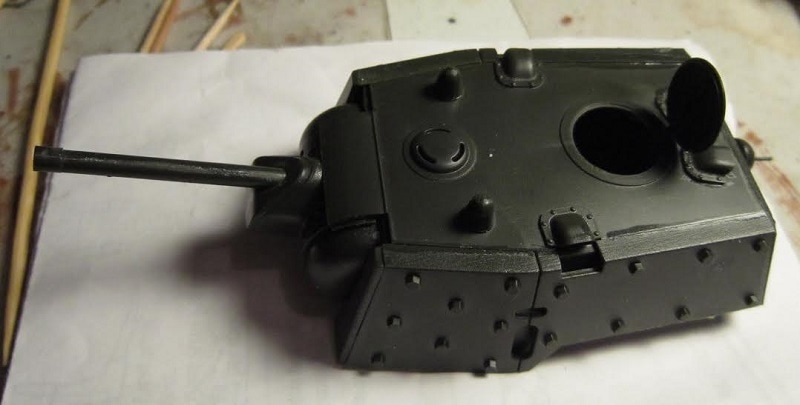 ​Multiples of smaller sprues carry the running gear and track links, including specific idlers and return rollers on the 2 multiple letter I trees. 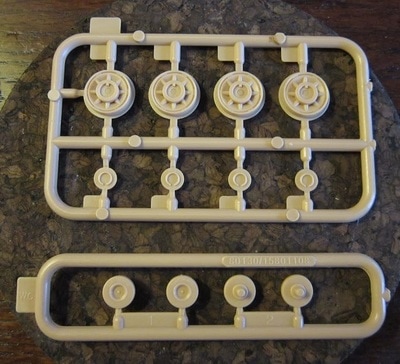 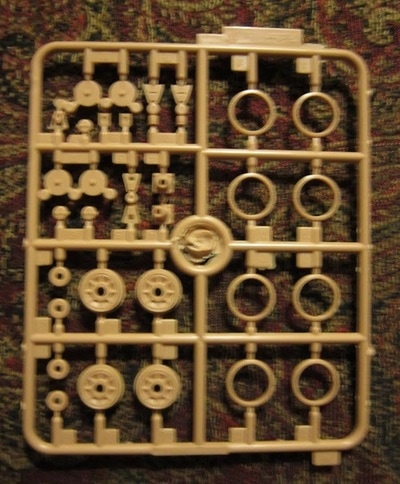 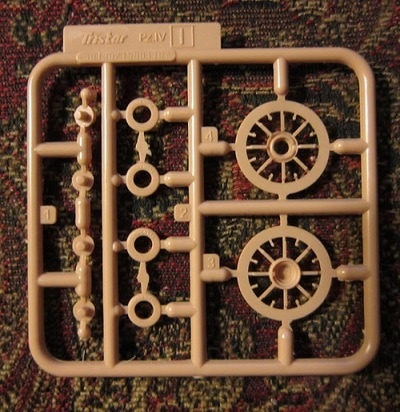 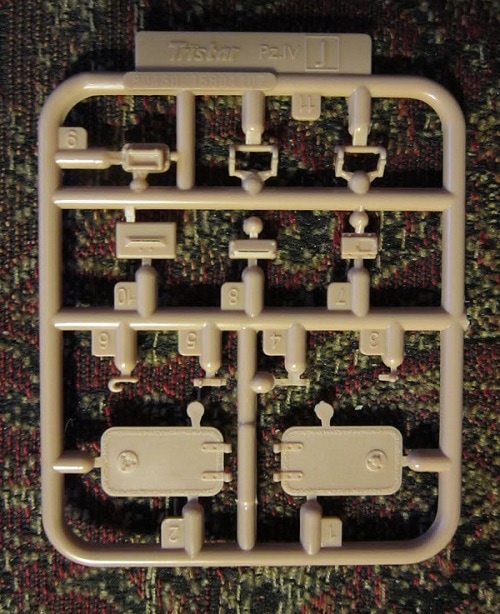 ​Tree letter L contains details specific to Ausf C that are to be used in place of some parts on sprues B and C. 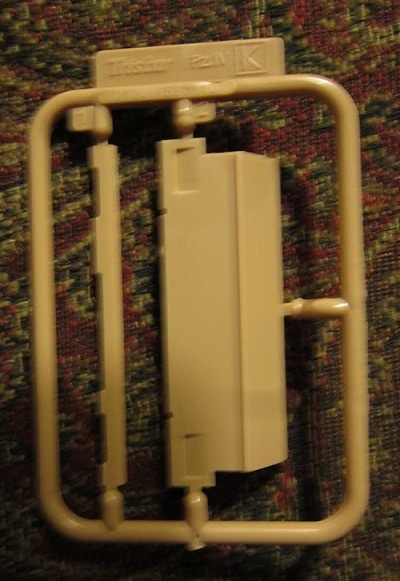 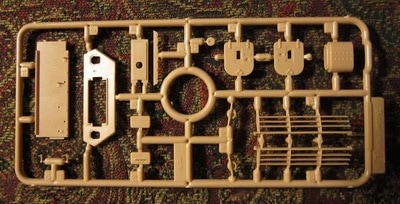 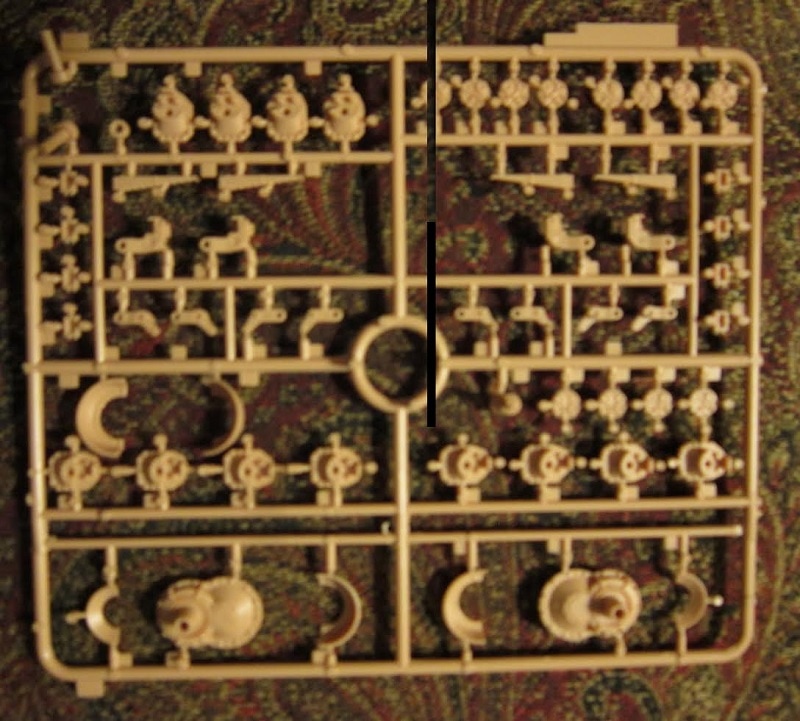 ​There are 3 multiple panzer grey colored trees. They hold the individual track links. (72 parts each). 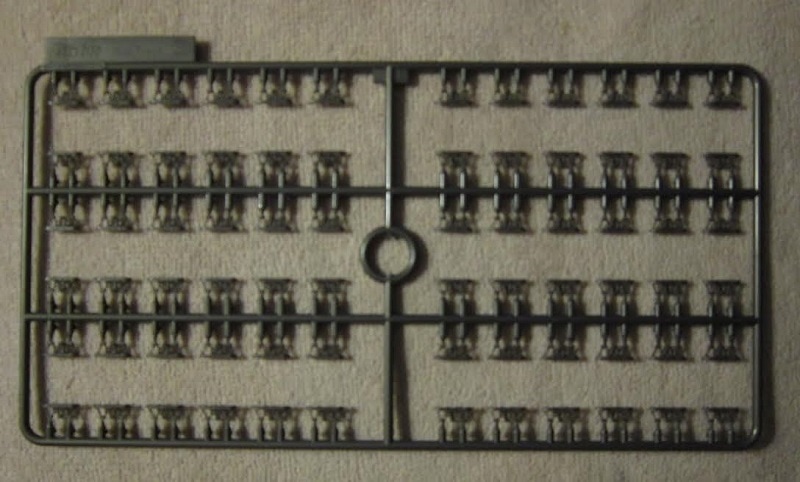 ​The length of brass wire (to fabricate tow cables out of) is next. 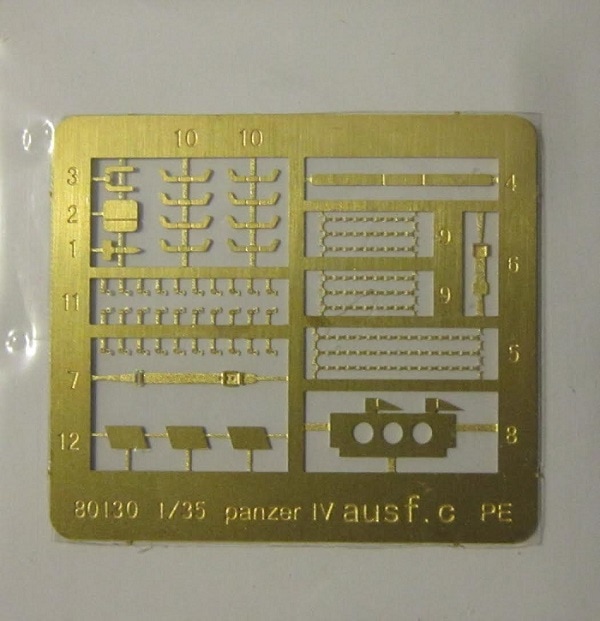 ​The decal sheet completes the kits contents. It has a frosted sheet taped to the face of it to prevent scratching and is in a sealed cello bag. 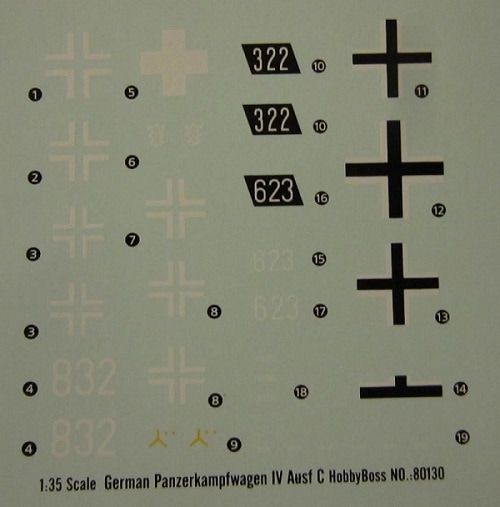 ​
From what I can tell the content of the box is virtually identical to the original 2003 Tristar offering, the only exception being the omission of a sprue (G) of specific spare track links.

Otherwise, the tracks are now in metallic grey styrene instead of sand, and the decal sheet is the same as before just with Hobby Boss’s name substituted in place of Tristar.

This is one very detailed kit externally and inside the turret. However, there is no detail for inside the hull or any crew figures and an after-market set for in there would augment the already stupendous detail.

This kit is not for the novice modeler. I recommend it only to modelers that have had experience with other very detailed kits like this one.

I swear, there must be over 600 parts in this kit !!  It has to have the MOST trees I've ever seen in a kit. The box is jam packed with no voids.

I won this kit in a raffle at an IPMS contest I just attended.