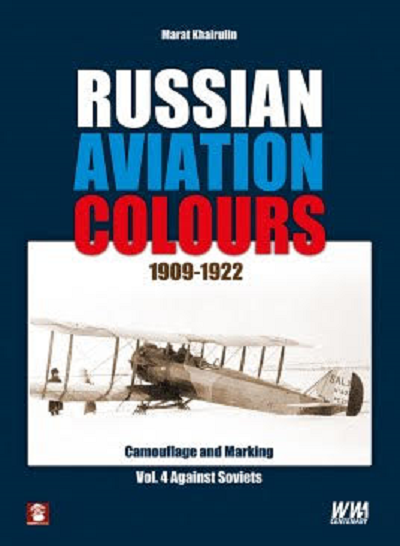 MSRP: $53.00
​The four-volumes of the Russian Aviation Colours series books describe the history of the little-known emblems and distinctive markings of Russian military aviation from its early origins up to the Russian exit from WWI.

The authors have managed to collect, and in some cases partially reconstruct most emblems and signs used in Russia during this period by military aviation units.

This collection of material is presented in a clear and attractive form - colour plates, reconstructed logos, and original photographs and full colour profiles illustrate the markings applied.

Detailed colour notes and precise descriptions and illustration of national markings over the period complete the book that will be invaluable to aircraft enthusiasts, historians and modelers.

Vol. 4 describes aircraft used by aviation units which were fighting against Soviets.

Mushroom Model Publications is based in the UK. All their books are printed by their associate Stratus in Sandomierz, Poland in the English language. Stratus also does their own line of books in both English and Polish.

This book is hard-bound of 128 pages in 8 1/2" x 11 3/4" page format.
The cover shows a black and white photo of a French Salmson sitting on a snow-covered field with 2 men looking on. This photo is again shown on page 120 of the book, over a colour profile of it. It is in a wave of tan and green over a light-blue under-carriage and is on skis. It has the blue, white and red vertical tail stripes on the rudder, with black SAL 242 over 423? over PC 200 over PU 310.

It was with the Military Aviation School of the Far East Spasskoye Village, winter 1919/1920.

There are 169 period black and white photos in the book (including the one on the front cover). No less than 60 colour profiles, nine of which are 2-views (wow!), 17 color illustrations of the colors used on the tails of the aircraft described in the book and 20 insignia and metals illustrations.

On the back cover there are 3 cover arts of the previous Russian Aviation Colors: volume 1 The Early Years, volume 2 Great War and volume 3 Red Stars.