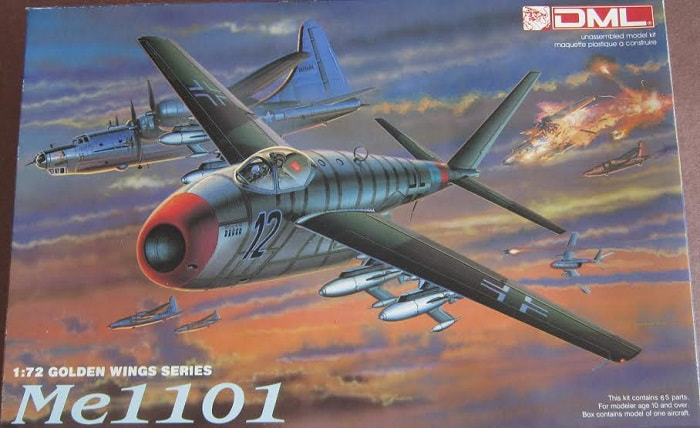 Although the development order was granted to the rival Fock-Wulf TA-183, the P1101 prototype was built to test the variable sweep-back wing which enabled three different angles to be preset on the ground.

The prototype was powered by a Junkers Jumo 0048 instead of the delayed HeS011. This aircraft nearly completed was  captured by the U.S. Army in a factory unknown to the Allies when the war was ending.

The P1101 prototype carried back to the U.S.A. was later completed as the Bell X-5, the world's first aircraft having inflight variable sweep-back wings.
The P1101, as well as the Ta-183, had a great influence on the development of jet aircraft in the world after the war.

This kit came in shrink-wrapped tray and lid type box.

The box art shows a Me1101 attacking a U.S. B-32 Liberator bomber. It is silver with dark-gray vertical bands around the fuselage. It has a red nose with a black 12 on the sides of it outlined in white. There are 5 victory marks before the 12. It has skeletal black German cross on the fuselage sides and below the wings with white skeletal ones above the wings.

It has a 2 shades of gray splinter pattern above the wings and elevators and on the rudder and a black and blue fuselage band. It carries rockets under it's wings.

One side panel has a one-paragraph history of the Me-1101 in 6 languages, including English.

Marco Polo Import Inc. in City of Industry, CA was the importer and distributor for DML in the 90's. Their address and FAX number are shown.

The copyright date of 1993 and MADE IN HONG KONG is said.

The other side panel shows 3 color photos of the model made up in a 2nd scheme that is the same as the box art one. Except, it has a black 60 on the sides of the nose, followed by a repeat of Marco Polo's address and FAX number, the copyright date 1993 and MADE IN HONG KONG again.

The instructions consists of a single-sheet that accordion-folds out into 8 pages in 7 1/8" x 10" page format.

Page 1 begins with a black and white repeat of the cover art, above the history of the Me-1101 in 6 languages, including English.

Page 2 begins with CAUTIONS about the kit, over international assembly symbol explanations and a suggested paint color listing of Gunze Sangyo and Italeri brands of paints in the 6 languages.

The bottom of the page has the first assembly step.

Page 3 through 5 give a grand total of 9 assembly steps.

Page 6 & 7 is the marking and painting instructions.

Page 6 has a 4-view of the box art scheme (already described above) Oberammergau 1945.. 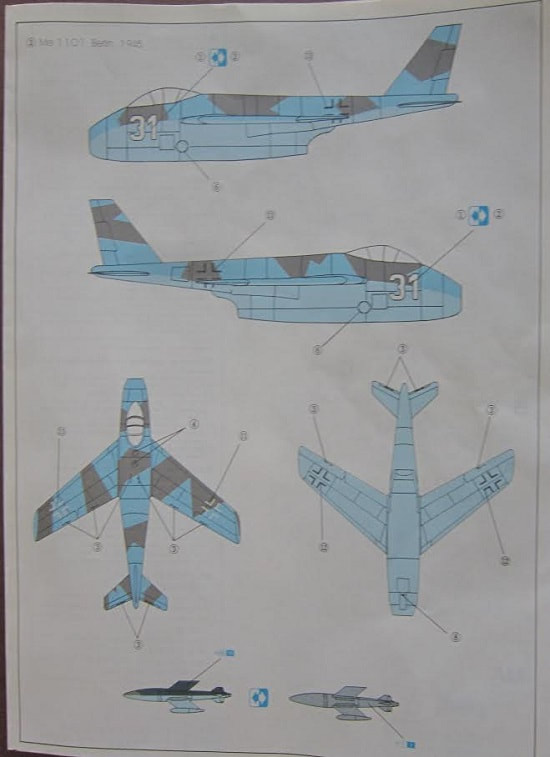 ​Color scheme for the rockets is shown as being dark-gray over white.

Page 8 is the parts trees illustrations and decal application instructions, over the copyright date of 1993 and PRINTED IN HONG KONG CHINA.

Trees are alphabetized and illustrated in the instructions and have part number tabs next to the parts on them. 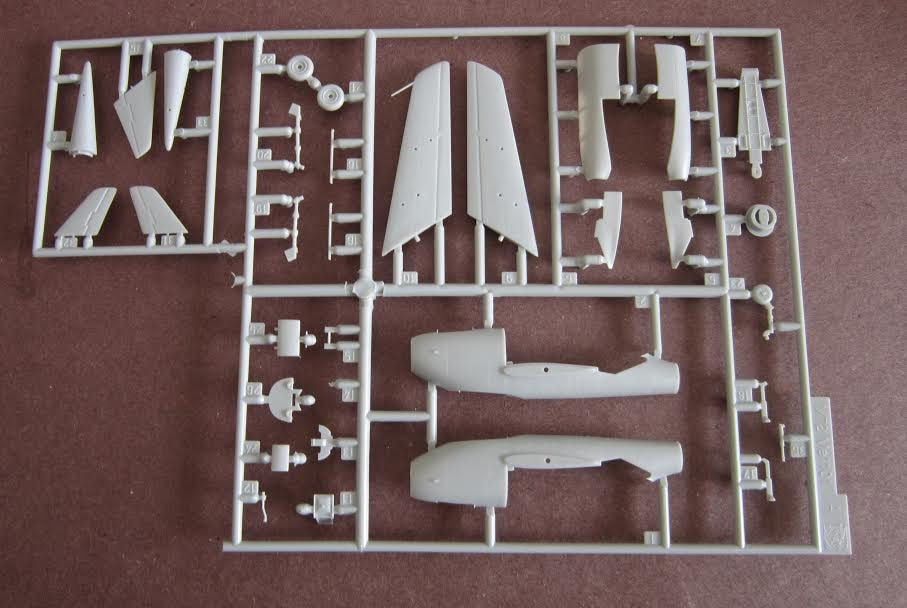 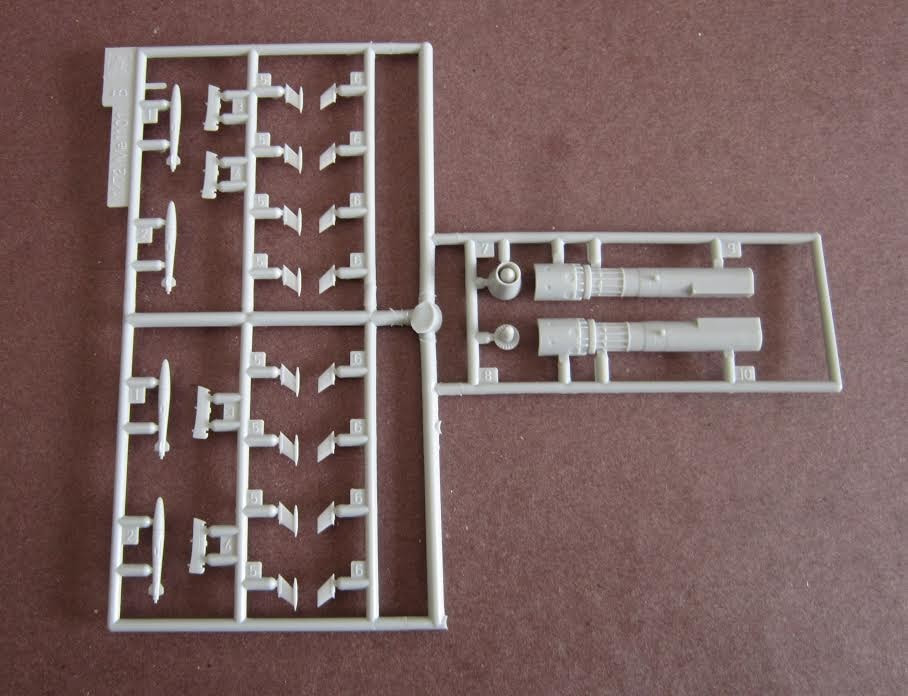 ​The small steel PE fret is in another sealed clear cello bag with a stiff card backing it. It holds: the dashboard, DF loop, antenna, cockpit side instrument panels (5 parts) 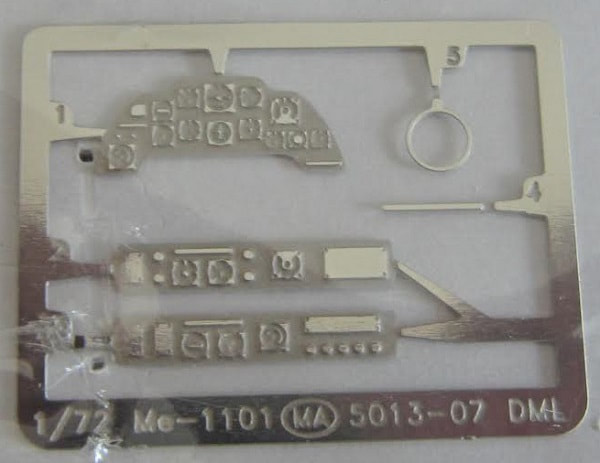 ​The decal sheet completes the kit's contents. It has red numbers zero through 9 outlined in white on it, to build your own fuselage number from and some stencil marks. 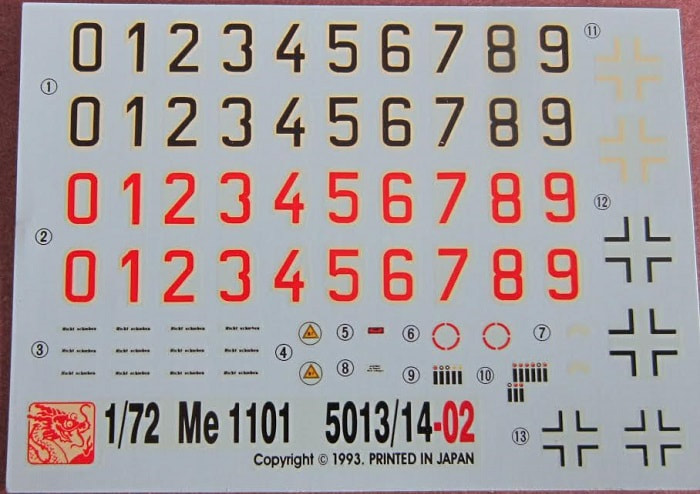 ​Model has nice engraved detail. No pilot figure is included and flaps are all molded solid.

This is a neat WHAT IF type kit.