The Supermarine Spitfire is a British single-seat fighter aircraft that was used by the Royal Air Force and many other Allied countries before, during and after World War II. The Spitfire was built in many variants, using several wing configurations, and was produced in greater numbers than any other British aircraft. It was also the only British fighter to be in continuous production throughout the war.

The Spitfire continues to be popular among enthusiasts, with approximately 54 Spitfires being airworthy, while many more are static exhibits in aviation museums throughout the world.

The Spitfire was designed as a short-range, high-performance interceptor aircraft by R.J. Mitchell, chief designer at Supermarine Aviation works, which operated as a subsidiary of Vickers-Armstrong from 1928. In accordance with its role as an interceptor, Mitchell supported the development of the Spitfire's distinctive elliptical wing (designed by B. Shenstone) to have the thinnest possible cross-section; this enabled the Spitfire to have a higher top speed than several contemporary fighters, including the Hawker Hurricane. Mitchell continued to refine the design until his death in 1937, whereupon his colleague Joseph Smith took over as chief designer, overseeing the development of the Spitfire through its multitude of variants.

During the Battle of Britain, from July to October 1940, the Spitfire was perceived by the public to be the main RAF fighter, though the more numerous Hawker Hurricane shouldered a greater proportion of the burden against the Nazi German air force, the Luftwaffe. Spitfire units, however, had a lower attrition rate and a higher victory-to-loss ratio than those flying Hurricanes because of its higher performance. Spitfires in general were tasked with engaging Luftwaffe fighters (mainly Messerschmitt Bf 109F series aircraft which were a close match for the Spitfire) during the Battle.

After the Battle of Britain, the Spitfire superseded the Hurricane to become the backbone of RAF Fighter Command, and saw action in the European, Mediterranean, Pacific and the South-East Asian theatres. Much loved by its pilots, the Spitfire served in several roles, including interceptor, photo-reconnaissance, fighter-bomber and trainer, and it continued to serve in these roles until the 1950s. The Seafire was a carrier-based adaptation of the Spitfire which served in the Fleet Air Arm from 1942 through to the mid-1950s. Although the original airframe was designed to be powered by a Rolls-Royce Merlin engine producing 1,030 h.p. (768 kW), it was strong enough and adaptable enough to use increasingly powerful Merlins and, in later marks, Rolls-Royce Griffon engines producing up to 2,340 hp (1,745 kW); as a consequence of this the Spitfire's performance and capabilities improved over the course of its life.

The  Spitfire was facing several challenges by mid-1942. The debut of the formidable Focke-Wulf Fw 190 in late 1941 had caused problems for RAF fighter squadrons flying the latest Spitfired Mk Vb. By this time Rolls-Royce engineers were already working on a new version of the Merlin incorporating a two-stage supercharger; the combination of the improved Merlin and the Spitfire Mk VC airframe in a "stop-gap" design allowed the RAF to combat the Fw 190 on equal terms. In a second stream of development Supermarine was working on an improved, reinforced, Spitfire airframe which incorporated several new features and was designed specifically for the Merlin 60 and 70 series engines.This new airframe later formed the basis for the Rolls-Royce Griffon powered Spitfires.
​THE KIT:

Heller is an old prolific model company based in France. They manufacture all manner of model subjects in the popular scales.

This kit came in a shrink-wrapped end opening type box. I am no fan of this type of box, because invariably parts or the decal sheet will find their way past one of the end flaps to become lost forever. Give me a tray and lid type box any day of the week.

The box art shows two Spitfires above the clouds shooting down a He-111. The Spitfire in the foreground is in a wave pattern of darl green and dark earth over a pearl grey undercarraige. It has yellow leading edges on the wings, a white propeller spiner and fuselage band. The fuselage code is white SZ (roundel) X. However, on the decal sheet this is red and not white. It has the black serial no. BL479 over the fuselage band.

The Spitfire behind it carries the white fuselage code of VZ (roundel) X, but it is too far away to make out its serial no.

The bottom of the box lists 30 other aircraft kits that Heller markets.
​WHAT'S IN THE BOX:

This kit contains 4 medium-grey parts trees, a clear tree, the decal sheet and the instructions.
Parts are all in a sealed cello bag.

The instructions consist of a single sheet printed on both sides in 8" x 12" format, folded twice to fit the box.

The face side has the history of the Spitfire in French, with a listing of the names of the kit parts, one exploded drawing for assembly purpose, a 2-view illustration for marking and painting purpose, text to walk modelers through the build and a customer service coupon.

The reverse side repeats all of this again in English and German, but without the exploded drawing or the 2-view illustrations.

The parts trees are not alphabetized, nor illustrated in the instructions. They do however have part number tabs next to the parts on the trees. 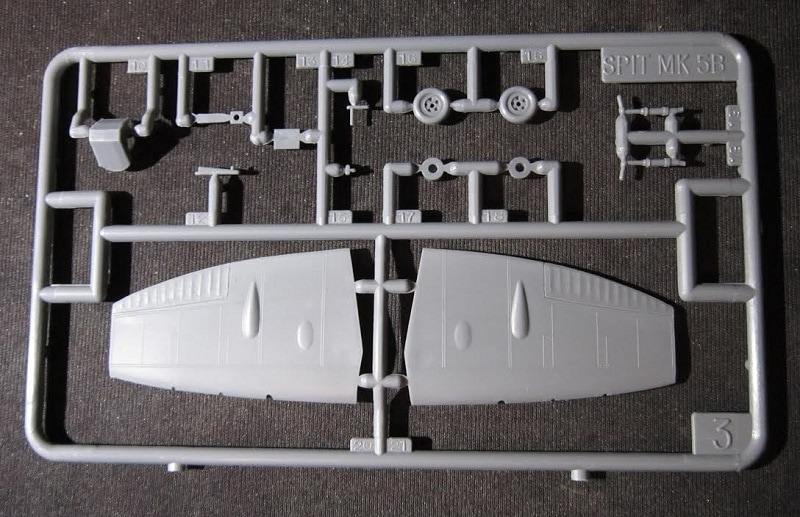 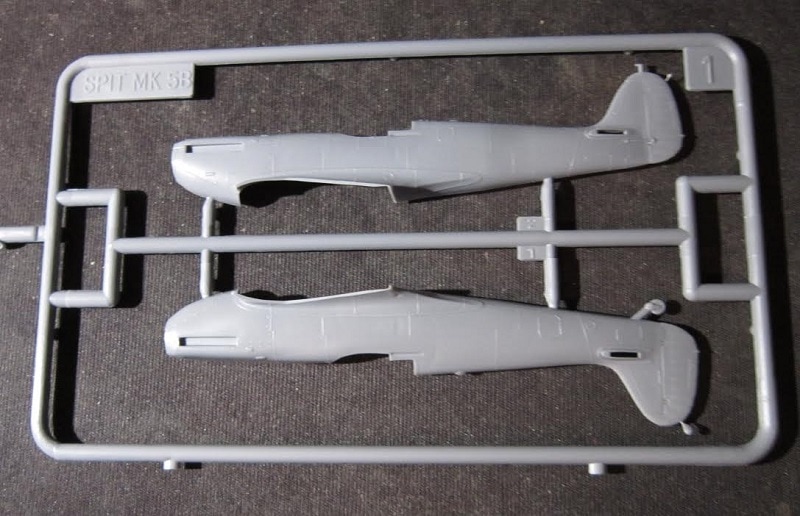 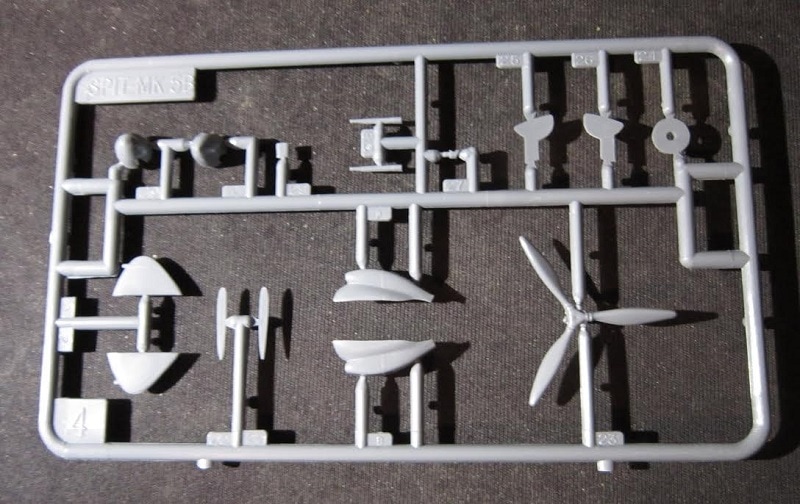 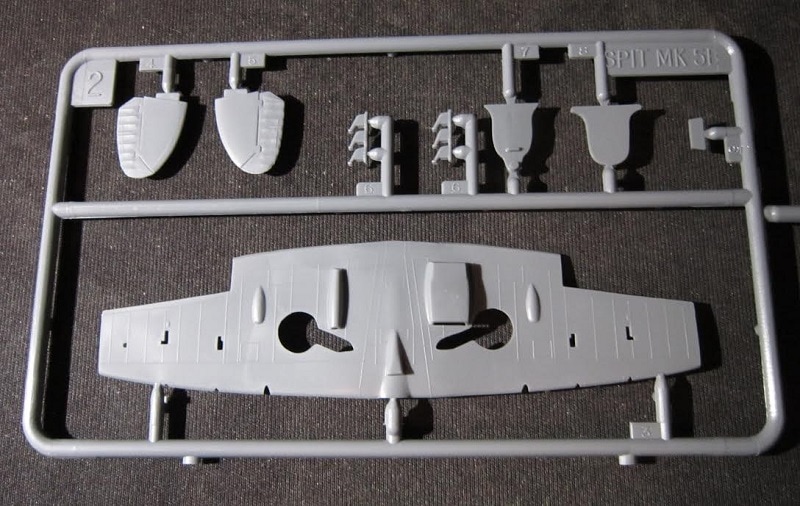 ​The clear tree holds the cockpit transparencies that come in 3 parts so the cockpit can be shown open. 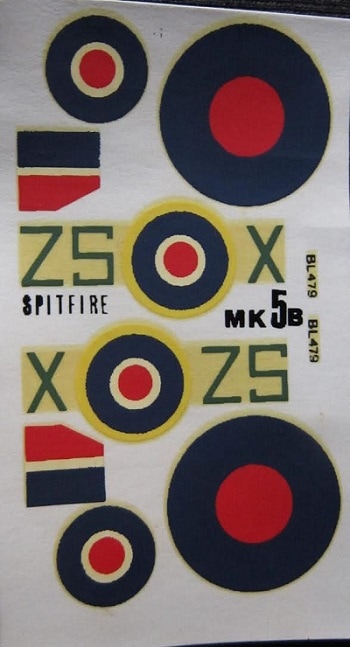 Control surfaces are all molded solid and the panel lines are of the raised variety.

This is a very nicely detailed kit of a Spitfire.

I bought my kit for a song at my local hobby shop that went out of business.