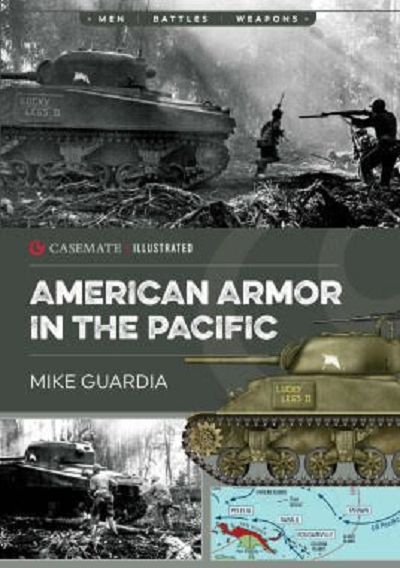 MSRP: $24.95
​The amphibious nature of the fighting in the Pacific War meant that the tank was predominantly deployed in  support of the infantry and there were no large-scale armor engagements to  rival Kursk or El Alamein.

However, American tanks proved critical in a number of Pacific battles, with M2 Stuart and M4 tanks proving their worth. Alongside these, the U.S. forces also employed the M2 light tank, the LVT Alligator, and the M3 half-track gun motor carriage.

The Imperial Japanese Army also fielded tanks and tankettes, including the  89 Chi-Ro, 95 Ho-Go and 97 Chi-Ha tanks, but none were a match for the M4 Sherman.

There were over 20 major tank battles and operations were tanks provided essential support for infantry units. These operations include the battle of  Tarawa, the Marshall islands, Marianas, and Peleliu. Armor expert Mike Guardia discusses how Army and Marine units deployed tanks in these battles, and  how they operated in the inhospitable beach and jungle terrain.

The strategies and tactics of both the U.S. and Japanese tank units are examined, as are the experiences of the crews and individual tanks involved in these battles.

This latest in the Casemate Illustrated series explores the  role of American armor during the Pacific War, exploring the evolution of both the American and  Japanese armored forces, the development and capabilities of the different tanks used during the war, and their part in the ferocious battles fought in the Pacific between 1942 and 1945.

Casemate Publishers is based in Havertown, PA.

They are a distributor of other companies books and their own books.

The front and rear covers have a 4” fold-over tab on them. The front tab has the history on it and the rear one tells about the author, over 4 black and white cover arts of other Casemate books: “Kursk 1943”, “The Falaise Pocket”. “Allied Armor in Normandy” and “German Armor in Normandy”.

At the top of the cover-art there is a black and white photo of a M4 Sherman that is overall olive-drab with a white nickname “Lucky Legs II” on the side of the hull and a white star on the sides of the turret.

It was with the 754th Tank Battalion and is shown leading soldiers following it from the 129th Infantry Regiment during the Bougainville campaign.

Below it is a color side profile of “Lucky Legs II”, another black and white photo of a Sherman being followed by infantrymen and a color map illustration of Pacific islands.

The back  cover has 3 black and white photos of infantrymen and Shermans in  Jungles and a color profile of a Dutch Army later day M2/M3 series tank, the Marmon Herrington. It did not have a rotating turret, which limited its service life.

The book contains 102 images (counting the covers), 7 color side profiles, 2 battle maps, and one color photo.

73 photos are of Shermans.

A Sherman with deep  water air intakes wading gear is shown, one with a anti-mine flail on front and one with a M17 multiple-launch rocket system on top.

A color profile of  a LVT amphibian and the  M3 half-track.

This is one neat book. It will be of interest to modelers and military historians alike. Highly recommended.

All their titles and the titles of other publications they distribute can be seen on their website at:
www.casematepublishers.com