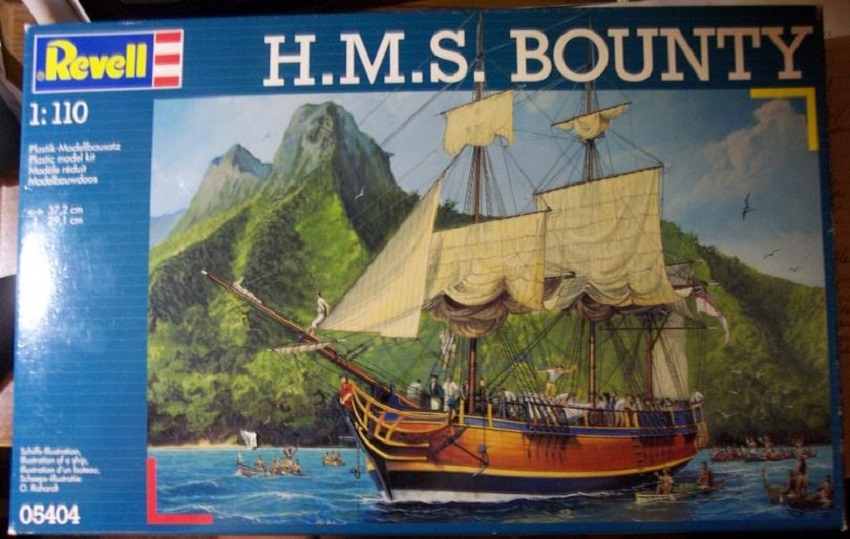 One of the most famous vessels in maritime history is the H.M.S. Bounty. It was a sailing ship that became known for the bold mutiny that too place on board in 1787.

Captain William Bligh was ordered by King George III to bring bread fruit from Tahiti to the West Indies in the Bounty. Captain Bligh ruled with an iron hand and continually reduced the rations of his crew. On 28th April 1879 the famous mutiny occurred. Bligh and 18 of his henchmen were set adrift in a boat, but after a veritable odyssey of a voyage succeeded in making their way back to England.

The rest of their crew decided to remain in the region and settled on Pitciarn Island, far from the shipping lanes. To prevent discovery, the Bounty was ultimately burned by the former crew in 1790.

Over the years, there have been several movies about this mutiny.
THE KIT:

The box art shows the Bounty arriving at Tahiti with all hands on deck waving to natives in canoes.

One side panel says that the kit contains 171 parts. Six paint colors in the Revell paint line are suggested to complete the kit. Revell cement is also suggested. This is all said in multiple languages including English.

Features of the kit are listed in the same languages as:

Four color photos of various areas of the finished model are shown here too.
A one paragraph history of the Bounty in 4 languages (including English) is on the other side panel. Revell’s German web address is shown above a copyright date of 2002 and mention of their partner Monogram. The panel says that the kit was molded in Poland and some printing was done in Germany. More info about the kit is listed in German, English, French, Nederlands, Svenska, Italian and Spanish.

That it is an unassembled plastic kit. No paint or cement is included. The kit is in 1/110th scale and 37.2 cm long. The instructions are pictorial and multilingual and provide precise assembly instructions. The kit is suitable for ages 10 to adult.

Seeing the complexity of this kit, I would put the bottom age much higher.

The bottom of the box shows the full color box arts of 6 other model ship kits that Revell markets:

No scales are mentioned for these kits.

A color photo of Revell paints, cement and a rudimentary air-brush is shown. A list of skill levels (1 to 5) is shown. This kit is designated as a 5, which means “Difficult with over 150 parts, requiring a very high level of building skill”.

Inside the box is 2 cello bags of parts.
One bag holds a bunch of chopped up sprues of parts and some loose ones molded in dark brown. 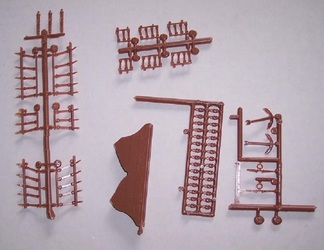 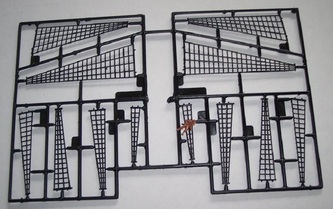 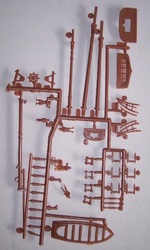 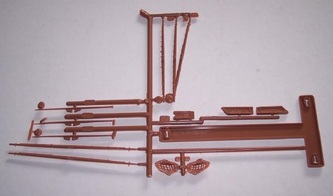 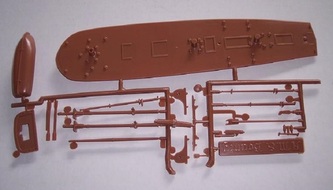 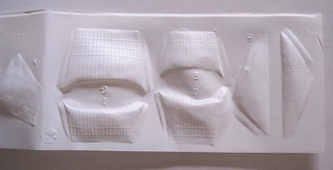 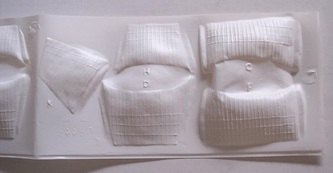 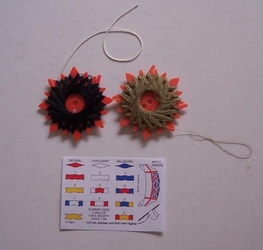 The instructions complete the kit’s contents. It consists of a unbound booket printed on newsprint type paper in 8 ½” x 12” page format and is 19  pages long.

Page 1 says it was printed in Poland and the copyright date of 2002 is again mentioned. A black and white photo of the model made up is at the top of the page, followed by the history of the Bounty in multiple languages. Revell’s address in Germany is provided at the bottom of the page along with their telephone number there and their web address.

Pages 2 and 3 is CAUTIONS and WARNINGS in 18 languages.

Page 4 is READ BEFORE YOU START instructions in the 18 languages.

Page 5 begins with international assembly symbol explanations, followed by a listing of paint colors suggested to complete the model.

Pages 6 and 7 are the parts trees illustrations. These will only be partially helpful as the parts are not on what you would call TREES, but are pretty much chopped up into sprues of a few parts. The instructions are miss-leading a bit by making you think there are bigger trees. The parts are numbered on the chopped up sprues, but searching for a part needed is going to take extra time. Bad move Revell!

Rigging for this kit is complex and not for the faint of heart or beginning modeler. I am no fan of rigging and avoid sailing ships and biplane models because of that.

In the right hands of experienced sailing ship modelers with a lot of skill this kit will make up quite nice. I recommend it only to them.

I won my kit in a raffle at a recent IPMS contest.