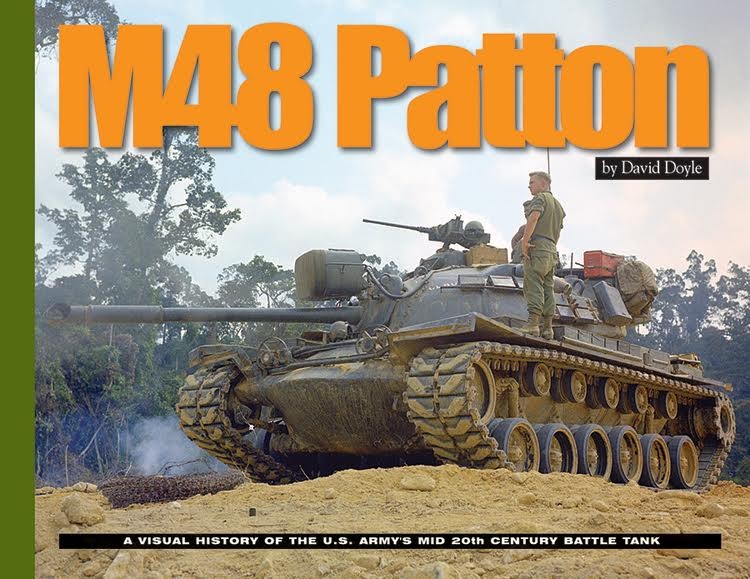 MSRP: $29.95
​The M48 series of Medium tanks came into being driven by the need to replace the M26 Pershing that began production late in WWII.  The Pershing was always considered to be underpowered.

Interim solutions were undertaken, including the M46, which was a M26 with a new air-cooled 12 cylinder Continental engine, and the M47, that combined a modified M46 hull with the new turret from the T42 program.

Development of the new tank began at Chrysler in 1950, with testing of the new vehicle beginning in February of 1953. The conflict in Korea made it imperative that replacement tanks be produced. The T48 was approved for production even before it was standardized. Nearly 1,000 T48's were produced before the production model was standardized as the "90 mm gun tank M48".

Upgrades made to the M48 series, throughout the 1950's and 60's, addressing concerns about limited range and visibility in the commander's cupola to improving the fire control system.
With the advent of the M60 main battle tank in the late 1950's, various programs were instituted to bring the huge fleet of M48 tanks up to the most modern standard.

Initially, the desire was to install the new diesel-power plant and 105 mm gun from the M60. The 90 mm gun was considered to adequate for the conflict in Viet Nam and huge stockpiles of ammunition were on hand. These factors influenced the decision to retain that weapon.

Thus, in 1967, conversion of M48A1's to diesel-powered M48A3's began. Recognizable by the tall vision ring below the commander's cupola,it became the primary U.S. tank in Viet Nam.
Further modifications were made to the M48 fleet into the 1970's, extending its service life with the U.S. forces to over 30 years. It remains in the inventory of many nations to this day.

Ampersand Publishing is based in Delray Beach, Florida. They are a Hobby Link company. Their books are printed in China.

There are 200 very clear and sharply focused photos that are mostly walk-around shots of variants of the M48. Added to that are 32 black and white ones. These show every inch of the tank's anatomy both inside and out.

This book will be of great interest to modelers and AFV enthusiasts alike. Highly recommended.
​I want to thank the folks at Ampersand Publishing and at Hobby Link Japan for this review sample.

All of Ampersand's books can be viewed on their web site at: