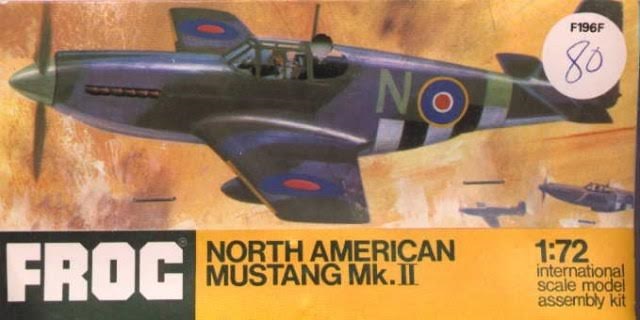 This kit has a copyright date of 1970 when it was first released in bag packaging. It was re-released always in boxes in 1974, 1976 (twice), 1977 and 1978 under the Novo brand. Frog went out of business in the UK and their molds went to Novo in Russia, who also has gone out of business
​HISTORY:

The North American Aviation P-51 Mustang is an American long-range, single-seat fighter and fighter-bomber used during World War II, the Korean War and other conflicts. The Mustang was designed in 1940 by North American Aviation (NAA) in response to a requirement of the British Purchasing Commision. The Purchasing Commission approached North American Aviation to build under licenseCurtiss P-40 fighters. Rather than build an old design from another company, North American Aviation designed a new plane. The prototype NA-73X airframe was rolled out on 9 September 1940, 102 days after the contract was signed, and first flew on 26 October.
The Mustang was originally designed to use the Allison V-1710 engine, which, in its earlier variants, had limited high-altitude performance. It was first flown operationally by the Royal Air Force (RAF) as a tactical-reconnaissance aircraft and fighter-bomber (Mustang Mk I).

The addition of the Rolls-Royce Merlin to the P-51B/C model transformed the Mustang's performance at altitudes above 15,000 ft, allowing the aircraft to compete with Luftwaffe's fighters The definitive version, theP-51D, was powered by the Packard V-1650-7, a license-built version of the Rolls-Royce Merlin 66 two-stage two-speed supercharged engine, and was armed with six .50 caliber (12.7 mm) M2/AN Browning machine guns.

From late 1943, P-51Bs (supplemented by P-51Ds from mid-1944) were used by the USAAF's Eighth Air Force to escort bombers in raids over Germany, while the RAF's 2 TAF and the USAAF's Ninth Air Force used the Merlin-powered Mustangs as fighter-bombers, roles in which the Mustang helped ensure Allied air superiority in 1944. The P-51 was also used by Allied air forces in the North Afican, Mediterranean, Italian and Pacific theaters. During World War II, Mustang pilots claimed to have destroyed 4,950 enemy aircraft.

Frog was a prolific model company once based in the UK that went out of business. After their demise their molds went to Novo in Russia, who also went out of business.
This kit came in a cello bag that is sealed at the top with a header card that is folded over the opening and stapled into place.

The cover art shows a Mustang II in formation with 2 other mustangs. It is in a wave pattern of dark green and grey with grey undercarraige. It has black and white D-Day bands around the fuselage and the wings and the letter code N in sky type S on the fuselage sides in front of the roundel.

The folded over section of this header card shows two 3 views of schemes:

2. A P-51A in overall OD above a grey undercarraige. It has 5 diagonal stripes around the fuselage, a white tail tip with 3 horizontal white stripes below it, a yellow serial no. 36189 over the diagonal stripes.

It is with the First Commando Group. India 1944 and flown by Col. Phillip G. Cochran
Kit was made in Great Britain.

Below the 3-views it says "Multi lingual assembly pictures. Choice of markings for one of two different models". This is said in 7 different languages with each language labeled with color illustrations of the roundels of that countries Air Force that speaks those languages.

The other side of the header card begins with international assembly symbol explanations above 6 assembly steps.
​

There is a frosted sheet provided that is supposed to protect the decal sheet from scratching. However, it was loose and floating around in the bag and not protecting a darn thing. So, I stapled it to the decal sheet. 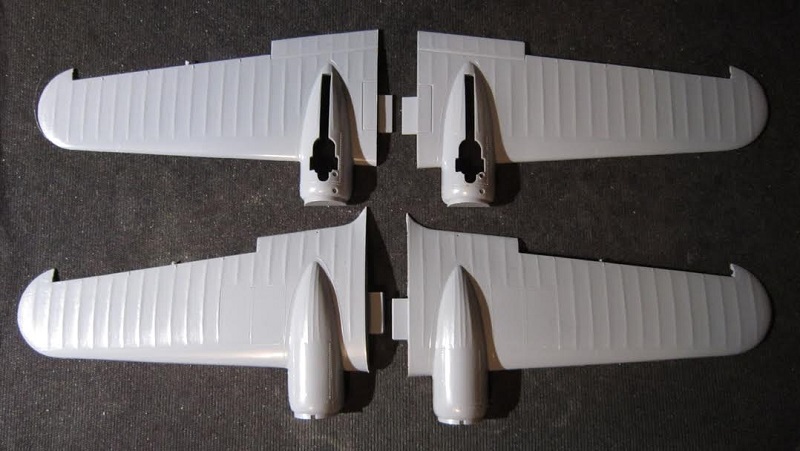 ​The 2nd medium grey parts tree holds: the propeller, one half of the fuselage, the pilot, pilot seat, gear doors (6 parts). 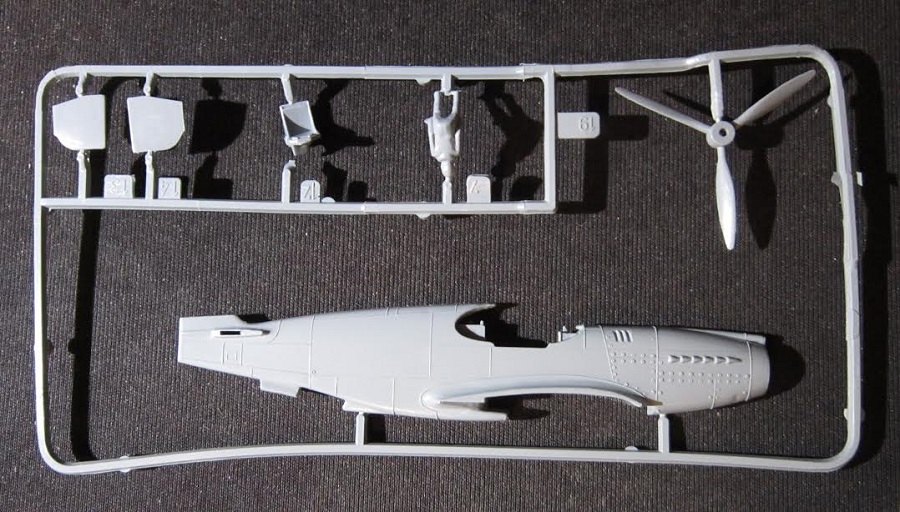 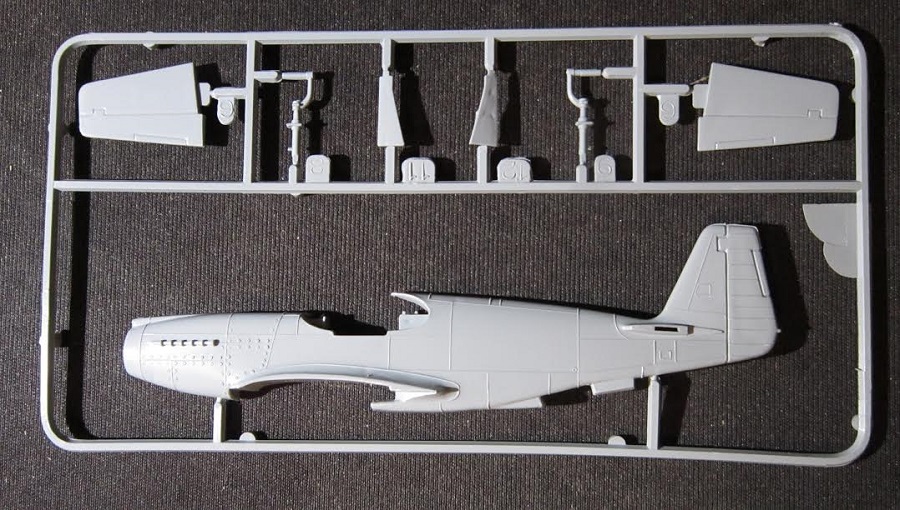 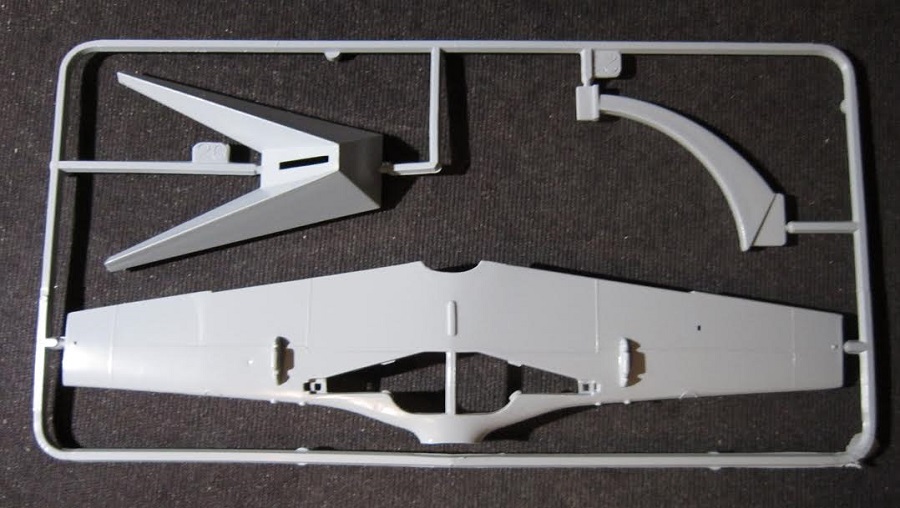 ​The clear part is the single canopy. It is molded shut. 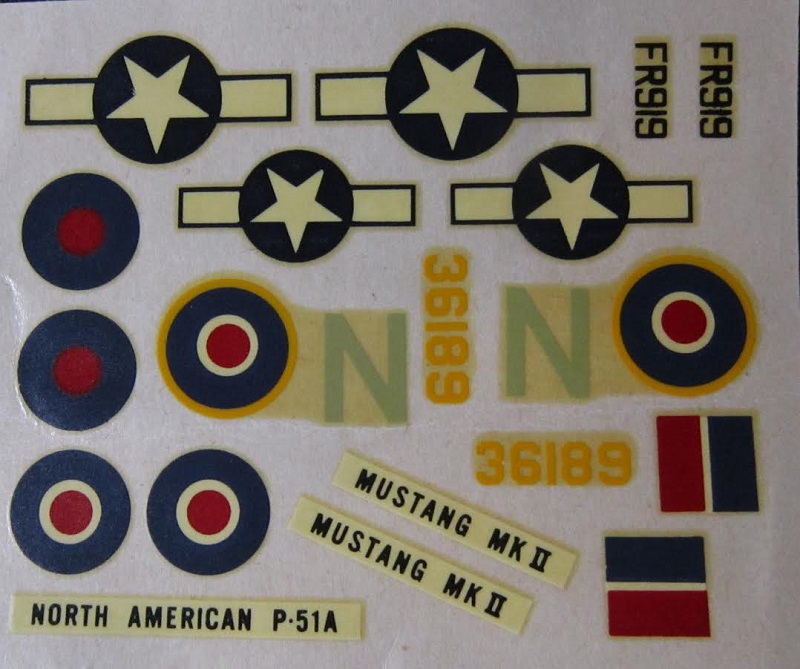 ​This is a very nice older kit of the P-51A or Mustang II (as the Brits called it). A popular aircraft subject among many modelers.

The control surfaces are molded solid and the panel lines are of the raised variety.

I purchased my kit at my local hobby shop almost 50 years ago for a paltry .98 cents.