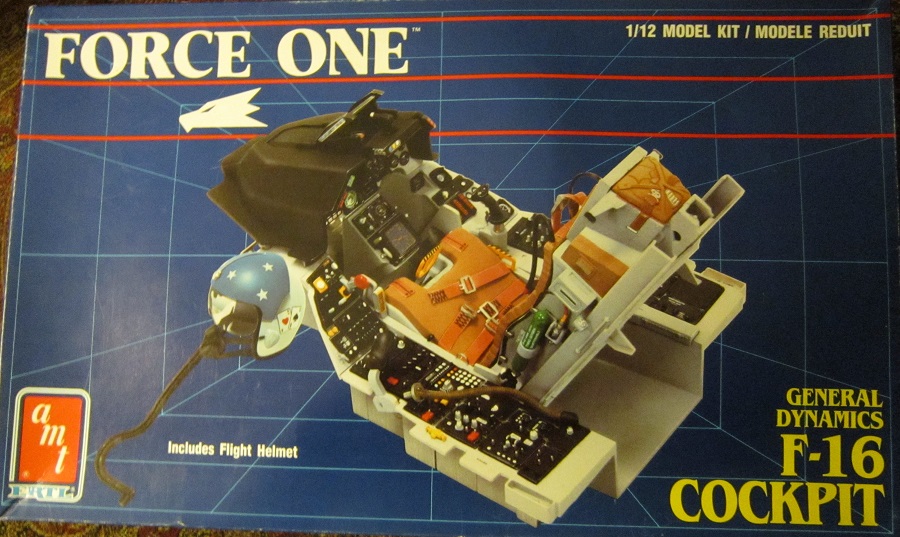 AMT Ertl was a model company based in Dyresville, Iowa. Ertl began by manufacturing metal farm toys for years and later branched out into model kits. The company has been sold a few times and I really don’t know what they do anymore.

The F-16 Cockpit, while conventional in general layout, incorporates several design innovations not found in previous fighter aircraft. The f-16 features a short control stick mounted on the right side of the cockpit, as opposed to a long column on the floor between the pilot’s knees. Instead of moving the entire column, the side stick responds to pressure or force the pilot places on the stick. This allows faster, more precise aircraft response to the pilot’s commands.

The side stick has miniature transducers buried in the handle, preset to about 32 pounds of pressure for response.

The controls the pilot exerts on the side stick are transferred to a computer which then controls the plane’s flaps, vertical stabilizer and horizontal stabilizers through an electronically controlled hydraulic system.

This whole system is called “fly by wire” for short. Because of high “G” forces exerted on the pilot in the very maneuverable F-16, this “fly by wire” feature enables the pilot to sustain higher “G” loadings and keep the plane in control than would a conventional center-mounted movable control stick.

The pilot’s foot pedals are also “fly by wire” with minimal movement and built-in transducers. The seat is tilted back about 30 degrees to improve tolerance of “G” load forces on the pilot, reducing the blood pool loops and minimizing “black outs”.

Everything necessary to fly the plane, track enemy aircraft and missiles, navigate and locate targets for the plane’s weapons systems and check on the plane’s operation, as well as communications with other planes and its airbase, is easily visible and reachable by the pilot. It is a marvel of current high technology in aircraft development.

This kit came in a shrink wrapped tray and lid type box. There is a letter “L” void inside the box that makes it 2 ¾” too long and 2 ½” too wide around the contents.

The box art shows the cockpit made up and posed against a blue background that has white stripes on it.

One side panel of the box has a color photo of the model made up and posed on it’s display base plate. This is followed by the history of the cockpit and a copyright date for the kit of 1990. Below that is Ertl’s address in Dyresville, IA and the address of their office in Ontario, Canada. The kit is said to have been made in Italy and the printing and packaging done in the U.S.

The other side panel lists the features the kit contains: completely detailed control panels, removable ejection seat, complete decals for instruments and labels, position able pilot’s flight helmet, over 110 parts, display base, paint and cement not included. This is followed by 4 walk-around color photos of the cockpit and pilot’s helmet made up.

The kit contains 3 tan trees of parts, a tree of clear parts, self-adhesing cloth seat belts, a self-adhesing gold name plate to go on the base part in a large sealed cello bag. The decal sheet and the instructions and a subscription application form to get the BLUEPRINTERS news letter complete the kit’s contents.

The instructions consist of a single large sheet that is folded several times to fit the box. It is 22 ½” x 17 ¼” in size printed on both sides.

The first long page begins with the history of the F-16 followed by a black and white illustration of the cockpit made up and IMPORTANT information about the kit and suggested tools to use. The bottom of the page has “Building is for the advanced modeler” and phone numbers to call Ertl with any problems with the kit.

Page 2 through 6 give a grand total of 31 un-numbered assembly steps. Colors of parts are called out in each step. There are no parts trees illustrations in the instructions. The sprues have part numbers next to the parts but they are not alphabetized. This makes for extra careful work to get the right parts for each assembly. Bad move AMT Ertl.

I’m going to beg off and not do my usual telling what parts are on the trees. It is just too daunting and I would surely get things wrong. I ask readers to just look at the sprue photos to see what’s on them.

I started to assemble the seat with just a few parts and then quit. I will truly finish this model later.

There are a lot of different colors to paint things on this cockpit. You will have to go with the box art for this in addition to the assembly steps calling out colors of parts.

This makes up into an attractive and very detailed model. It is not a subject you see everyday in a large scale like this.

Kit is courtesy of my wallet 25 years ago in Dyresville, IA at Ertl's factory discount store. 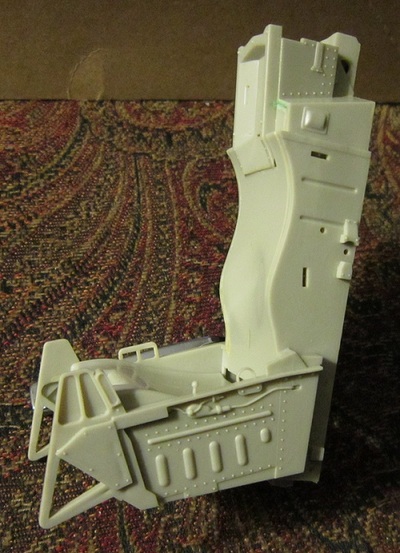 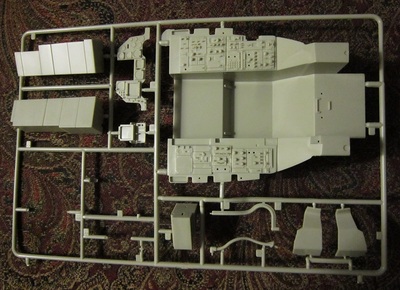 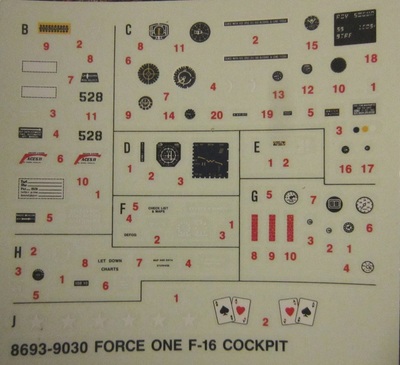 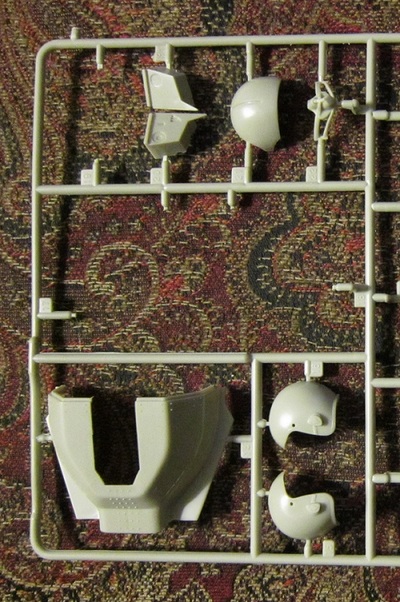 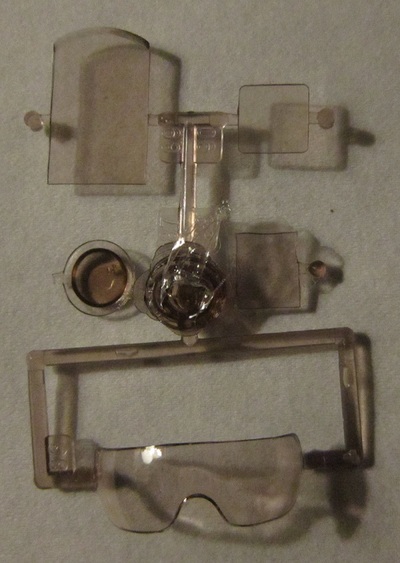 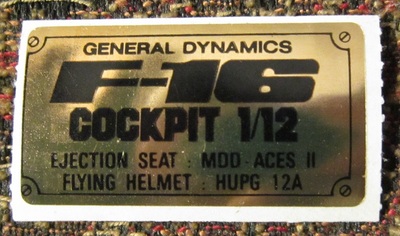 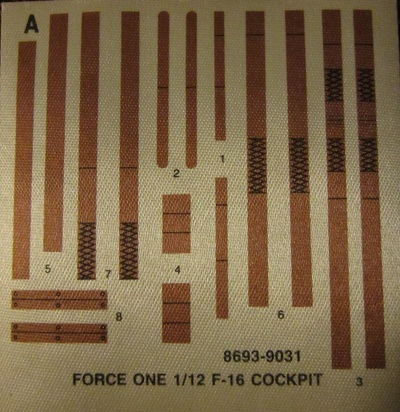 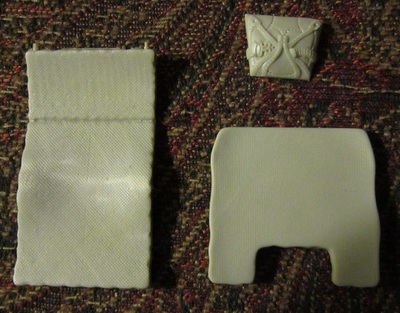 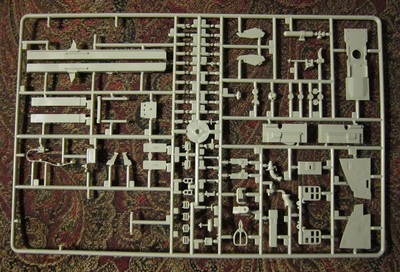 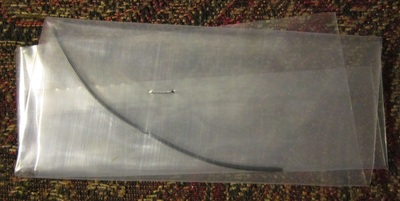