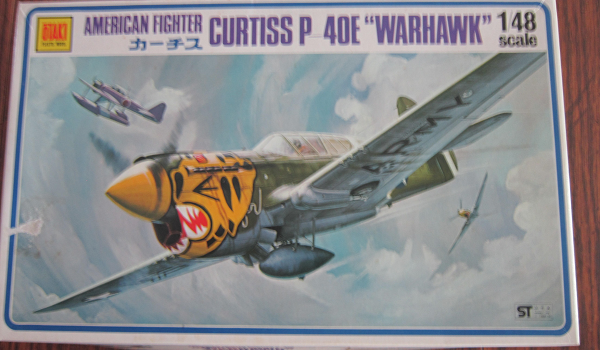 The Curtiss P-40 Warhawk is an American single-engine, single-seat, all-metal fighter and ground-attack aircraft that first flew in 1938. The P-40 design was a modification of the previous Curtiss P-36 Hawk which reduced development time and enabled a rapid entry into production and operational service.

The Warhawk was used by most Allied powers during World War II, and remained in front line service until the end of the war. It was the third most-produced American fighter, after the P-51 and P-47; by November 1944, when production of the P-40 ceased, 13,738 had been built, all at Curtiss-Wright Corporation's main production facilities at Buffalo, New York.

P-40s first saw combat with the British Commonwealth squadrons of the Desert Air Force in the Middle East and North African campaigns, during June 1941. No. 112 Squadron Royal Air Force, was among the first to operate Tomahawks in North Africa and the unit was the first Allied military aviation unit to feature the "shark mouth" logo, copying similar markings on some Luftwaffe Messerschmitt Bf 110 twin-engine fighters.

The P-40's lack of a two-speed supercharger made it inferior to Luftwaffe fighters such as the Messerschmitt Bf 109 or the Focke-Wulf Fw 190 in high-altitude combat and it was rarely used in operations in Northwest Europe.

However, between 1941 and 1944, the P-40 played a critical role with Allied air forces in three major theaters: North Africa, the Southwest Pacific, and China. It also had a significant role in the Middle East, Southeast Asia, Eastern Europe, Alaska and Italy.

The P-40's performance at high altitudes was not as important in those theaters, where it served as an air superiority fighter, bomber escort and fighter-bomber. Although it gained a postwar reputation as a mediocre design, suitable only for close air support, more recent research including scrutiny of the records of individual Allied squadrons indicates that this was not the case: the P-40 performed surprisingly well as an air superiority fighter, at times suffering severe losses but also taking a very heavy toll of enemy aircraft.

The P-40 offered the additional advantage of low cost, which kept it in production as a ground-attack aircraft long after it was obsolete as a fighter.

Otaki is a model company based in Japan.

The box art shows 2 P-40E's attacking a Japanese float plane. The P-40E in the foreground is olive-drab over neutral-gray undercarriage. It has a tiger head on the nose and a yellow spinner, black U.S. ARMY under the wings, white fuselage band and white vertical band on the rudder, with yellow 98.

One side panel has a small color profile of this aircraft and one of a British Warhawk. It is in a wave pattern of mid-stone and dark-earth over azure-blue undercarriage. It has a shark mouth on the nose, red spinner, white fuselage code GA roundel Y and a tri-color on the rudder flap.

​The other side panel has 5 color box arts of other 1/48th scale aircraft kits that Otaki manufactured:

No kit numbers are given for these 5.

The kit contains 3 medium-gray trees, a clear tree, the decal sheet in 2 clear stapled-shut cello bags. It has 3 instruction sheets. There is a small tube of glue included in the kit, over the years it has gotten hard as a brick.
​The first instruction sheet is 7 1/2" x 11" format, all in English. It is folded in the center to create 4 pages.

Page 1 has a one-paragraph history of the P-40E over the painting and marking instructions. Shown are 3-views of 3 schemes:

!. The one with the tiger head on the nose (already described above).

2. The one with the fuselage code GA roundel Y (also already described above)

3. An Australian Air Force "Kitty Hawk" in a wave pattern of dark-green and dark-earth over a light-blue undercarriage, with a black spinner and white 83 and A2983 on rear of fuselage sides.

The top of page 4 is the decal application instructions, over the parts trees illustration, with names of all the parts.

The trees are alphabetized.
​Medium-gray letter A tree holds: the fuselage halves, engine, nose doors, bombs and their racks (10 parts) 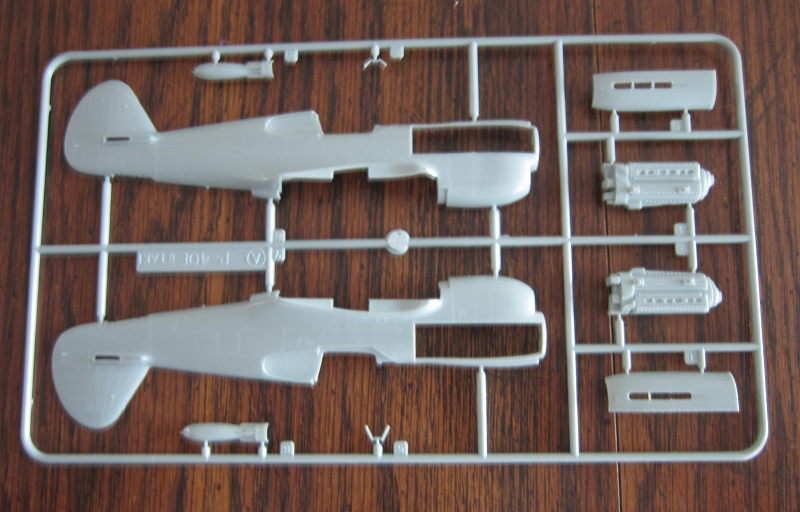 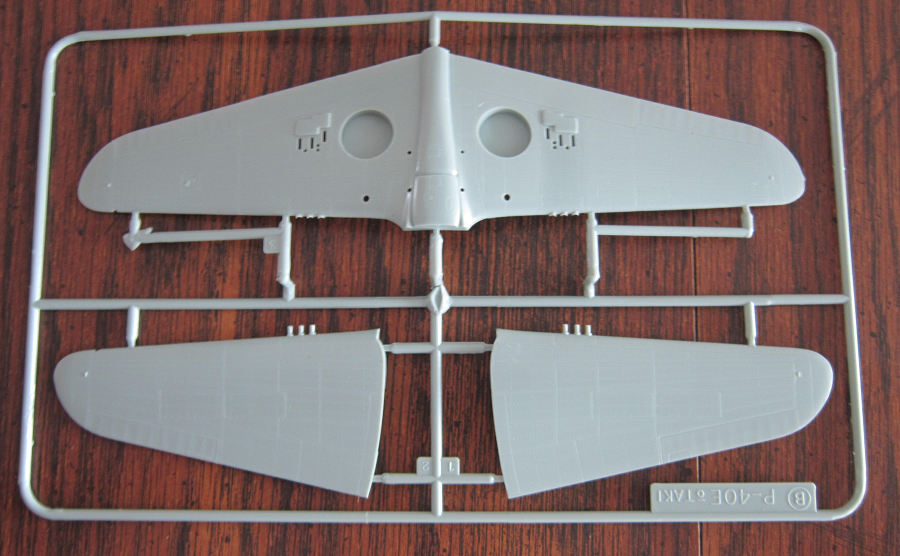 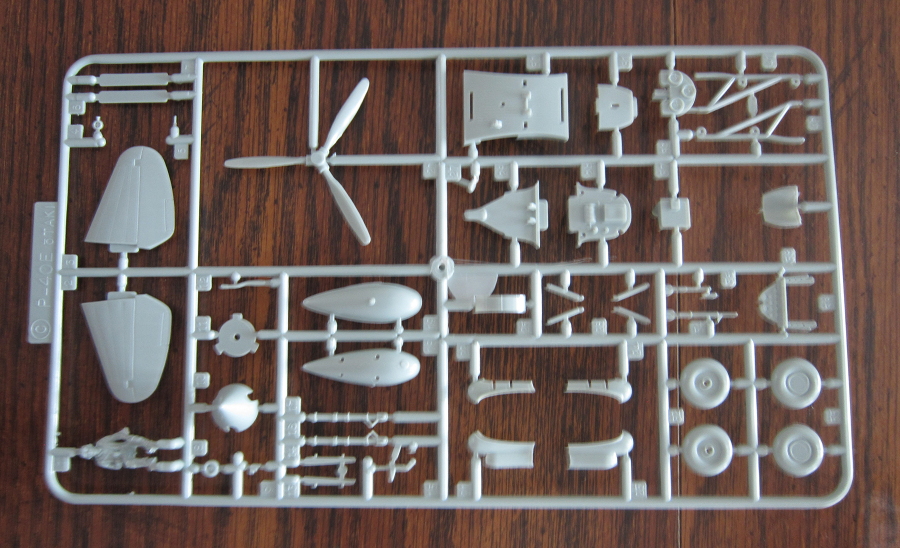 ​Next is that small tube of glue.

​The second instruction sheet is identical to the first one, but all in Japanese.

The 3rd instruction sheet is 8 1/2" x 11" printed in color on one side on slick-coated paper. It has color profiles of the P-40E with the tiger head nose (the box art scheme) and the British Kitty Hawk with the white fuselage code GA roundel y. 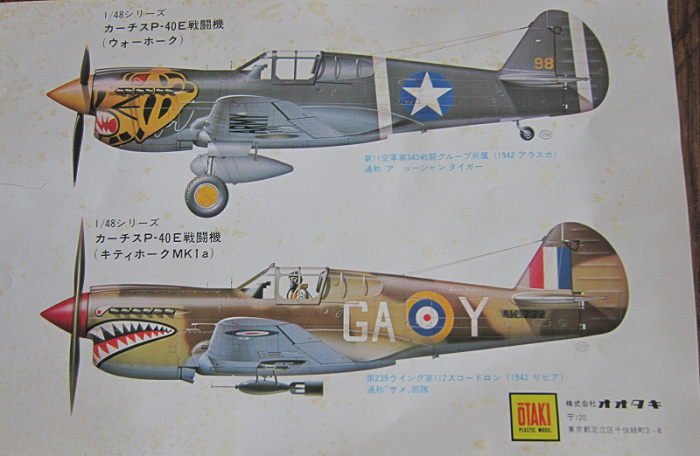 This is nicely detailed kit with engraved panel lines. All flaps are molded solid.
​Highly recommended.