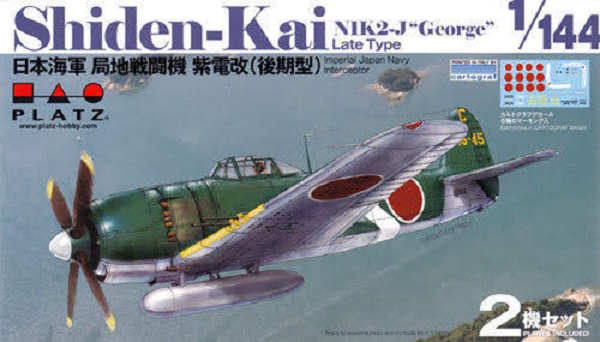 Assigned the reporting name "George", the N1K-J was considered by both its pilots and opponents to be one of the finest land-based fighters flown by the Japanese during World War II.

The Shiden Kai possessed heavy armament as well as surprisingly good maneuverability, due to a mercury switch that automatically extended the flaps during turns.

These "combat" flaps created more lift, thereby allowing tighter turns. Unlike the Mitsubishi A6M Zero, the Shiden Kai could compete against the best late-war Allied fighters, such as the F6F Hellcat, F4U Corsair, and P-51 Mustang.

This kit comes in a un-wrapped end-opening type box. I am no fan of this type of box, because invariably parts or the decal sheet find their way past one of the end flaps to become lost forever. Give me a tray and lid type box any day of the week.

The box art shows a George flying over some islands. It is dark green above a silver under carraige. It has a white tipped spinner, a diagonal white fuselage band, yellow wing leading edges and tips of the propeller blades. It has a yellow serial letter C over 343-45 on the rudder sides.

One side panel has a small color photo of the George made up in the box art scheme, followed by a illustration of the parts of the clear canopy and a one-paragraph history of the George in Japanese and English. Platz's telephone and FAX numbers are supplied, their street address in Shizuoka City, Japan and their web address.
​The other side panel says it is an unassembled  and unpainted plastic model kit in 1/144th scale. 2 planes are included, model is 65mm long when completed, kit includes 5 schemes of decals for 2 models by Cartograf brand decals, glue and paint are not included, some parts are extremely sharp, handle with care, do not use near fire when using glue and paints, kit is suitable for age above 15.

This is all said in Japanes, English and French. Copyright of the kit is 2018 and it was made in Japan.

The bottom of the box serves as the painting and marking guide. Five color side views are shown:

1. a George that is overall orange-yellow with a black anti-glare panel in front of the windscreen, a red-brown spinner and black serial no. of a backwards letter C then K2J-6. It was the 6th prototype IJN Aviation Technology Experiment Division, Yokosuka 1944.

2. A George in the box art scheme (already described above)

3. A George that is dark-green over a silver undercarriage, with 2 white diagonal fuselage bands and yellow serial no. letter B over 343-30 on the rudder sides. It was with the 301st Fighter Squadron, 343rd Fighter Group, Ohmura AB, August 1945.

4. A George that also dark-green over a silver under-carriage, it carries the yellow serial no. letter A over 343-35 on the rudder sides. It was with the 301st Fighter Squadron, 343rd Fighter Group, Ohmura AB 1945.

5. A George that is also dark-green over a silver-undercarriage, with a silver spinner and white serial no. 5243 on the sides of the rudder. It was the 5243rd production aircraft at Naruo Factory of Kawanishi Aircraft.

An illustration of the decal sheet is shown, that was produced by Cartograf brand in Italy. 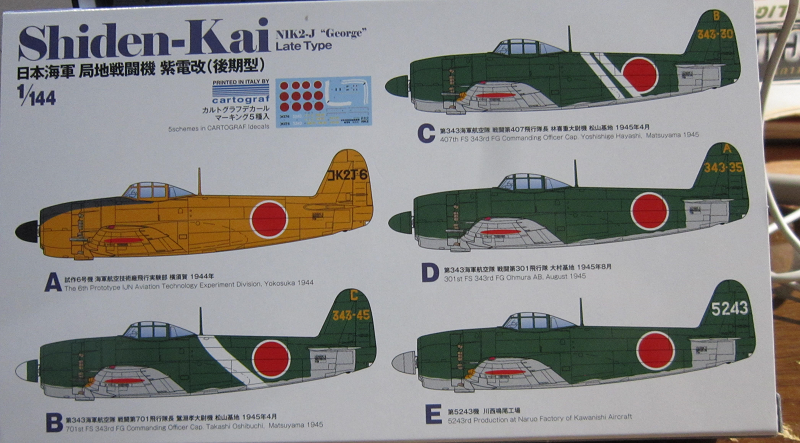 The kit contains 2 identical dark-grey trees and clear trees in a sealed cello bag with the decal sheet. The decal sheet is also in its own cello bag and has a tissue to protect its face from scratching.

The two trees are alphabetized as being letter A. 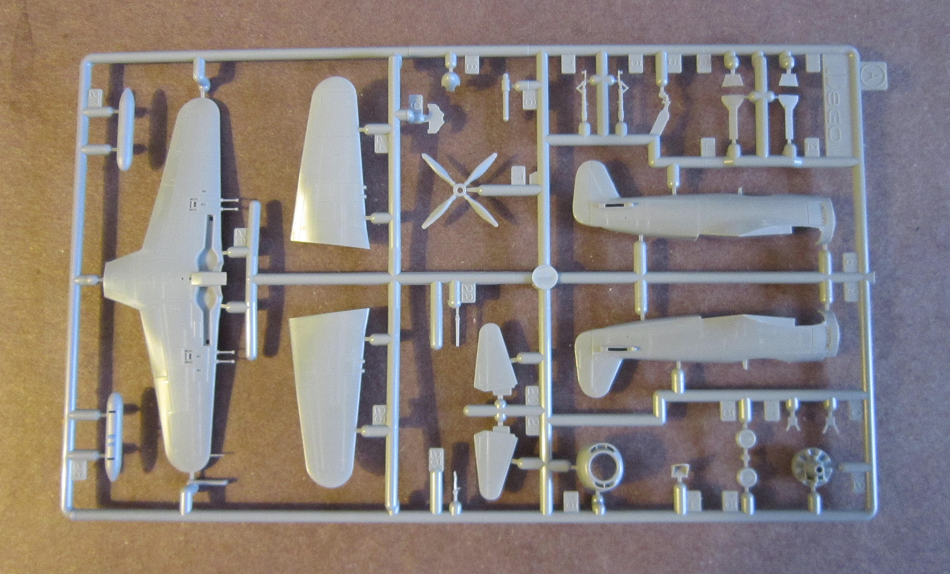 ​The 2 clear trees hold a cockpit canopy. (1 part each) 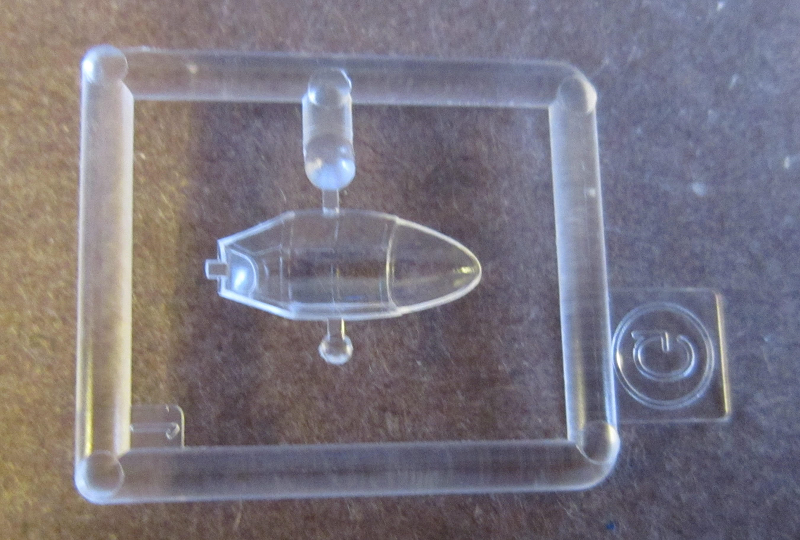 ​The decal sheet and the instructions complete the kit's contents.

​The instructions consists of a single-sheet, folded in the center to create 4 pages in 6" x 8 1/4" page format.

Page 1 begins with a one-paragraph history of the George in Japanese and English. Then READ THIS FIRST that says "This is a plastic unassembled scale model kit, glue and paint are not included, some parts are extremely sharp, handle with care, do not use near fire while using glue and/or paints, kit is suitable for age 15 and above".

Bottom of the page has the first 4 assembly steps.

Page 2 begins with decal application instructions in Japanese and English and Platz's telephone and FAX numbers.

Bottom of the page has a balance of a grand total of 7 assembly steps.

Step 6 is pointing to the next 2 pages.

Page 3 & 4 is the marking and painting guide. It shows the 5 schemes that are on the box bottom as 2-views each now. All have been described above already.
Bottom of page 4 has a suggested paint color listing of GSI Mr. Color and Model Master brands of hobby paints. 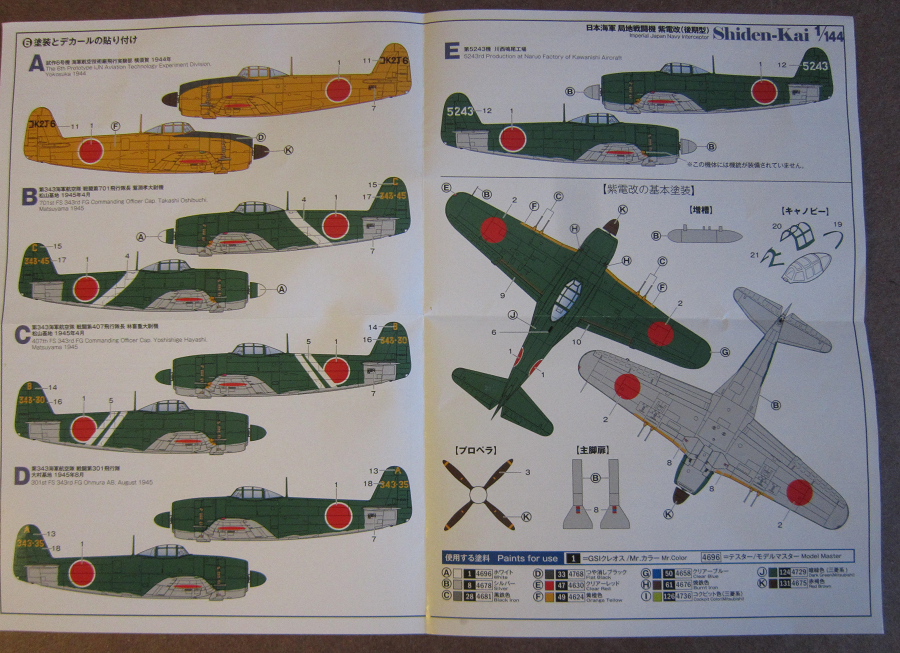 ​There is no pilot figure included. Flaps are all molded solid. Detail is engraved.
Highly recommended.

All Platz products can be viewed on their web site at:
http://www.platz-hobby.com/