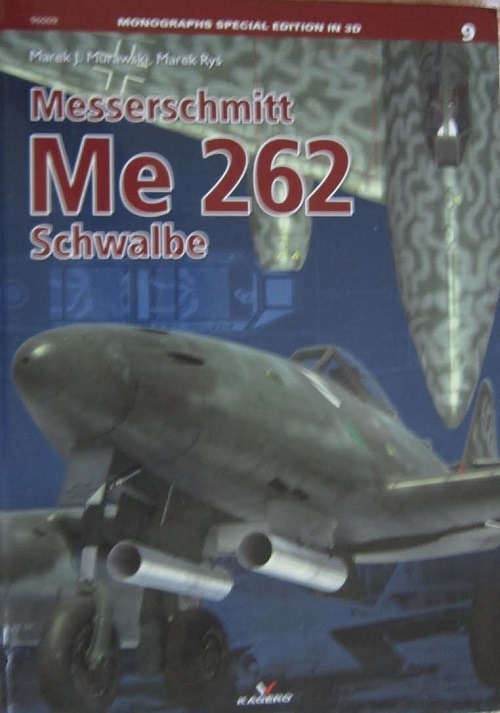 Review of Messerschmitt Me-262 Schwalbe
Monograph Special Edition In 3D, No. 9

Design work started before World War II began, but problems with engines, metallurgy and top-level interference kept the aircraft from operational status with the Luftwaffe until mid-1944. The Me 262 was faster and more heavily armed than any Allied fighter, including the British jet-powered Gloster Meteor.

One of the most advanced aviation designs in operational use during World War II, the Me 262's roles included light bomber, reconnaissance and experimental night fighter versions.

Me 262 pilots claimed a total of 542 Allied aircraft shot down. Although higher claims are sometimes made. The Allies countered its potential effectiveness in the air by attacking the aircraft on the ground and during takeoff and landing.

Engine reliability problems, from the pioneering nature of its Junkers Jumo 004 axial-flow turbojet engines—the first ever placed in mass production—and attacks by Allied forces on fuel supplies during the deteriorating late-war situation also reduced the effectiveness of the aircraft as a fighting force.

In the end, the Me 262 had a negligible impact on the course of the war as a result of its late introduction and the consequently small numbers put in operational service.

While German use of the aircraft ended with the close of World War II, a small number were operated by the Czechoslovak Air Force until 1951. Captured Me 262s were studied and flight tested by the major powers, and ultimately influenced the designs of a number of post-war aircraft such as the North American F-86 Sabre and Boeing B-47 Stratojet.

A number of aircraft have survived on static display in museums, and there have also been several privately built flying reproductions that use the modern J-85 jet engine.

The cover shows the nose of a Me-262A-1 with rocket tubes carrying WGr 21 missiles on Wikingerschill racks and a below and above view of a 262 in a green squiggle pattern over grey. It has the logo of JG.7 on the sides of the nose. This is a white shield with a black diagonal stripe across it and a white greyhound dog on the stripe. 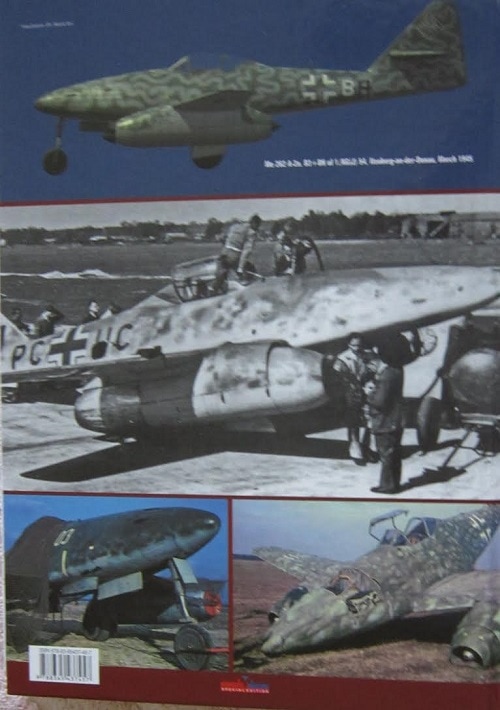 The first page of the book has a black and white photo of a model kit of a Me-262 made up. It is posed with fuel drums around it. I haven't a clue as to the model brand. It is a Me-262B-1a/U1 two-seat night fighter with nose radar.

There are 29 color walk around photos of Me262's in Museums.

For color profiles there are:

The last page of the book has color images of 2 other books that Kagero publishes: The Yak-1 & Bf-110.

One page in the book has 71 black and white small cover arts of other aircraft books that Kagero publishes. Wow- that's a lot! Modelers are sure to find one on the aircraft that they are interested in .

Highly recommended to both modelers and aviation historians.

This book came in a self-sealing clear envelope and includes a cardboard pair of glasses with one red lens and one blue lens to use to view the 3-D images.

​Casemate sent this sample to me in a heavily padded envelope.

I want to thank them and the folks at Kagero sincerely.

All Kagero titles can be seen listed on the Casemate site at: