The Nieuport 11, nicknamed the Bébé, was a French World War I single seat sesquiplane fighter aircraft, designed by Gustave Delage. It was the primary aircraft that ended the Fokker Scourge in 1916. The type saw service with several of France's allies, and gave rise to the series of "vee-strut" Nieuport fighters that remained in service (latterly as trainers) into the 1920s.

The Nieuport 11 was a smaller, simplified version of the Nieuport 10, designed specifically as a single-seat fighter. Like the "10" the "11" was a sesquiplane, a biplane with a full-sized top wing with two spars, and a lower wing of much narrower chord and a single spar.

Interplane struts in the form of a "Vee" joined the wings together. The sesquiplane layout reduces drag and improves the rate of climb, as well as offering a better view from the cockpit than either biplane or monoplane, while being substantially stronger than contemporary monoplanes.

The narrow lower wing may be subject to aeroelastic flutter at high air speeds, a problem that manifested itself on the much faster German Albatros D.III and the later "vee-strut" Nieuport fighters.

A single example of the Nieuport 11 was modified with a smaller lower wing and canted interplance struts but no further development ensued. Nieuport 11s were supplied to the French Aéronautique Militaire, the British Royal Naval Air Service, the Imperial Russian Air Service, Belgium, and Italy.

646 Nieuport 11s were produced by the Italian Macchi company under licence, and additional Nieuport 16s were built under licence in Russia by Dux. When Romania suffered military setbacks and needed aircraft, several RNAS Nieuport 11s, along with Nieuport 12s were provided.

The Nieuport 11 reached the French front in January 1916, and 90 were in service within the month.

This small, sesquiplane outclassed the Fokker Eindecker in every respect, including speed, climb rate and maneuverability. It featured ailerons for lateral control rather than the Fokker's wing warping, giving lighter, quicker roll response, and its elevator was attached to a conventional tail plane which provided better pitch control as opposed to the all-moving, balanced "Morane type" elevators of the Fokker.

The Fokker's success was solely due to its synchronized machine gun which fired forward through the arc of its propeller. At the time, the Allies lacked a similar system, and the Nieuport 11's Lewis machine gun was mounted to fire over the propeller, allowing uninterrupted forward fire. The Lewis was not synchronizable, due to its open bolt firing cycle design which resulted in an unpredictable rate of fire.

Clearing gun jams and replacing ammunition drums in flight were challenging though, and the drums limited ammunition supply. This was eventually resolved in French service by the application of the Alkan synchronization gear with a Vickers machine gun to Nieuport fighters starting with some later examples of the Nieuport 16. The British, in the absence of their own satisfactory synchronizer, continued with the overwing Lewis but employed a new "double" Lewis drum with a capacity of 98 rounds.

During the course of the Battle of Verdun in February 1916, the combination of the Nieuport 11s technical advantages and the concentration of the fighters within the first dedicated fighter units allowed the French to establish air superiority, forcing radical changes in German tactics.

Some Nieuport 11s and 16s were fitted to fire Le Prieur rockets from the struts for attacks on observation balloons and airships.

By March 1916 the Bébé was being replaced by the improved Nieuport 17, although Italian-built examples remained in first line service longer, as did Russian examples. Thereafter the Nieuport 11s and 16 continued to be widely used as trainers.

Smer is a model company based in Prague, Czech Republic.

It came in a shrink-wrapped tray and lid type box.

The box art shows a Nieuport 11 strafing cavalry troops. It isn't clue what army the troops are of ??

The aircraft is in a scheme of dark green over a light blue undercarraige. It has Soviet red stars in the usual positions.

The box is very blousy with a large letter "L" void around the parts inside.

It contains one pale grey tree of parts and some loose pale grey ones, a clear display stand, the decal sheet and the instructions.

The instructions consist of a single sheet folded in the center to create 4 pages in 12" x 8 1/4" page format.

Page 1 begins with a color repeat of the box art at the top, over the history of the Nieuport 11 in Czech.

Page 2 & 3 have a black and white photo of an actua Nieuport 11 sitting on a grassy runway, 2 exploded assembly drawings and a lot of Czech text. You are shown to heat rivet the main wheels onto the ends of the axles.

Page 4 has a color 3-view of the Nieuport 11 in the box art scheme and a lot of Czech text.
Parts trees are not illustrated in the instructions. There are no number tabs next to the parts on the trees.
The first pale grey tree contains the single piece upper and lower wings ( 2 parts). The lower wing has some molding flash and a large ejector pin mark.

The second pale grey tree contains the parts for the fuselage, tail and cockpit parts (7 parts). There is some flash on the tree but only a little on the fuselage where the tail goes.

The last part is the clear plastic stand. 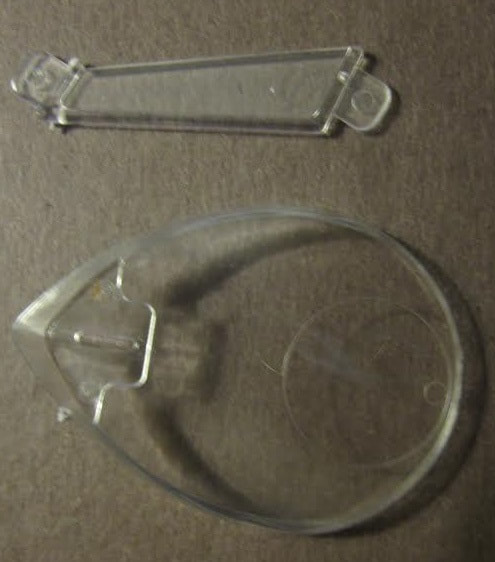 Detail is very nice on the parts. However, I don't like to do rigging on a biplane.
​This kit is for sale for a decent offer + postage.