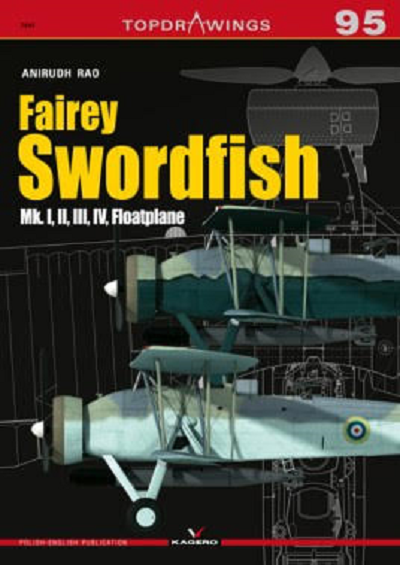 MSRP: $24.95
​The Swordfish was a British biplane torpedo-bomber and reconnaissance aircraft designed to operate from aircraft carriers or as a reconnaissance seaplane operating from catapult launchers. The prototype was built in 1933 at the Fairey Aviation Co.Ltd,

The aircraft had its first flight in 1933 too. It had an open cabin for three-man crew and fixed landing gear. It was powered by a Bristol Pegasus II M (640 hp) star engine

In 1934, Fairey Aviation released a second prototype that was equipped with a 690 hp Bristol Pegasus III M3 engine. The new type could also use floats. Series production began in 1935.

The Fairey Swordfish Mk.I was produced in both bomber-torpedo-reconnaissance version with a wheeled landing gear and as a float floatplane. The machine had a classic tail with a horizontal stabilizer. It also had folding wings. It had truss structure fuselage, with front covered with metal sheets. In the middle there were three uncovered tandem crew cabins. Undercarriage had a tail wheel and arresting hook under the fuselage. The aircraft was equipped with a inflatable dinghy.

The Fairey Swordfish was armed with one synchronized Vickers 7.7mm pilot’s machine gun, located  on the starboard side o the cabin and a Vicker’s K 7.7mm machine gun at the rear firing position. Bombing armament was attached to the bomb rack under the fuselage  and on several racks under the bottom of the lower wings.

The aircraft could carry a 457mm air torpedo, a 680 kg sea mine or a total of 730 kg bombs. Flares could be suspended from eight additional racks under the wings. Later versions were also equipped with rockets.

In 1943, production of the Fairey Swordfish  Mk.II version began. The machine was equipped with a 750 hp Bristol Pegasus 30 engine. The bottom o the fuselage was strengthened, allowing unguided rockets to be carried.

Also in 1943, the Mk. III version entered service, in which the ASV Mk. X radar was used. It was placed in the cover between the undercarriage legs. Fairey Swordfish Mk. II was powered by the Pegasus 30 engine.

The Fairey Swordfish Mk. IV was a slightly modified version of the Mk. II, but with a covered cabin. It was built in Canada and used as a trainer aircraft.

This book is in both English and Polish.

It comes in a self-sealing clear cello bag.

The cover art shows color illustrations of 2 Swordfishes, posed against a black background that has a white line drawing showing the top of a Swordfish.

The Swordfish at the top has a olive-drab top over a sand undercarriage and a white spinner., It has a blue U.S. circle with white star, outlined in yellow on the sides of its fuselage, followed by a black letter B outlined in yellow, followed by a small black ROYAL NAVY over V4448. It is a Mk. I version. It was assigned to the 833rd Squadron. It received temporary US insignia for Operation “Torch” – the Allied invasion of French North Africa in November 1942.

The Swordfish below it is overall light grey with a green cowling front half and a light grey spinner. It has wide diagonal fuselage bands of blue red and blue,  with a large white number 650 over the bands, followed by the British roundel and black serial no. L9781, which is also repeated on the rudder sides.

It is shown carrying a torpedo. It is a Mk. I version with the 820th Squadron NAS, FAA, HMS “Ark Royal”, 1939. The torpedo is a practice one as denoted by its red warhead. Live ones had additional colors.

The book contains line drawings of: a front 1/72nd scale 4-view of the float plane version, three 3-views of a Mk. I, a view of a Mk. Is cockpit, a view of a Mk. I with its wings folded and a head-on view of it and illustrations of the wing inner spars.

The face side of the first sheet shows 1/48th  a scale line drawing of a 4-view of the float plane version. The reverse side shows a 4-view of the Mk. I verion also in 1/48th scale.

The second sheet face side shows a 1/48th scale line drawing 3-view and cockpit interior of a Mk-I. The reverse side shows the wheels of a Mk. I and a 5-view of the float plane version and a side view of it, in 1/48th scale.

This is one neat book. It will be of interest to modelers planning on building a Swordfish model.

I want to sincerely thank Casemate Publishers, the North Armerican distributor of  Kagero books for this review sample. All Kagero book titles can be seen on Casemate’s web site at:
​www.casematepublishers.com
​Highly recommended.