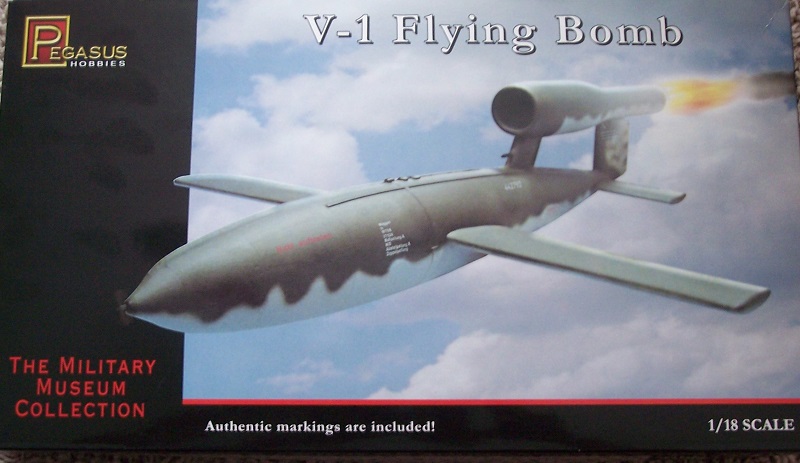 The V-1 flying bomb (German: Vergeltunswaffe 1)—also known as the buzz bomb, or doodlebug—was an early pulse-jet-powered predecessor of the cruise missile..

The V-1 was developed at Peenemude Army Research Center by the German Luftwaffe during WWII. During initial development it was known by the codename"Cherry Stone". The first of the so-called Vergelfungswaffen series designed for terror bombing of London, the V-1 was fired from launch sites along the French (Pas-de-Calais) and Dutch coasts. The first V-1 was launched at London on 13 June 1944, one week after (and prompted by) the successful Allied landing in Europe. At its peak, more than one hundred V-1s a day were fired at south-east England, 9,521 in total, decreasing in number as sites were overrun until October 1944, when the last V-1 site in range of Britain was overrun by Allied forces. This caused the remaining V-1s to be directed at the port of Antwerp and other targets in Belgium, with 2,448 V-1s being launched. The attacks stopped when the last site was overrun on 29 March 1945.

The British operated an arrangement of defences (including guns and fighter aircraft) to intercept the bombs before they reached their targets as part of Operation Crossbow, while the launch sites and underground V-1 storage depots were targets of strategic bombing

Pegasus Hobbies is a fairly new model company based in Montclair, California.

The box art shows a V-1 flying along above clouds. It is in dark green above a light blue undersides. The dark green is in a wavy demarcation at the bottom Numerous black and white stencil markings are on it and these marks are included on the decal sheet in the kit

One side-panel has a one paragraph history of the V-1, followed by the statement that the kit includes 12 parts and that paint and glue are not included. A symbol indicates that the kit is for modelers of ages 14 years and older.

On the other side-panel this symbol is repeated and it is said that the kit is not suitable for children under 14. The European distributer is listed as Pocketbound Ltd. In the UK and their P.O. address there is provided. Mention is made that the kit was made in China.

Inside the box are 12 lonely dark green parts, the decal sheet (in a cello bag) and the instructions.

The instructions consist of a small sheet that is folded in the center to create 4 pages in 6 ¼” x 9” page format.

Page 1 begins with a black and white repeat of the box art, followed by the history of the V-1.

Pages 2 and 3 give a grand total of only 3 assembly steps.

Page 4 is the decaling and painting guide with a 2-view illustration. Only 2 colors are called out: dark green and light blue.

The decal sheet completes the kit’s contents and it holds stencil marks in black and white.

The 12 parts are: the fuselage halves, the jet halves, the elevators, the wing tops and bottoms, the air intake screen and the small propeller.

This kit is close to being a snap-tight kit and goes together in no time flat. Painting and decaling will take the most time constructing it.

I am sadly disappointed that it does not contain any kind of a cradle to set it on for the price that is asked. Sitting just on it’s BELLY on a display shelf will look like hell. Bad move Pegasus. The rudder and wing and elevator flaps are molded solid and would take some major surgery to re-position.

The little propeller’s shaft gets positioned in a trough molded inside the fuselage halves which traps it and allows it to turn after construction.

The wings are not a tight fit to the fuselage. This is okay, because on the actual V-1’s the wings were pressed onto spars before take-off.

The kit has some decent inscribed panel lines, but the actual V-1’s had flush riveting of the wing skins and the wings in the kit are smooth. Some stencils shown in pictures of V-1’s in museums is missing on the decal sheet too.

Years ago Mushroom Model Publications started out in the UK as just a modeling newspaper. They later became a publisher of books and the newspaper was discontinued. In one the issues of the newspaper was a great article about the V-1 with blue print drawings that contained all kinds of tech info on the V-1’s. I would gladly e-mail copies of these to anyone that would like to have them.

However, if you want a BIG model of a V-1 this kit will fill that bill. It makes up to be 16” long with a 11 ¾” wing span in 1/18th scale. I recommend it to modelers of basic modeling skills and would place the age of the modeler suggested as less than 14 that the kit suggests. I recommend it other than the negatives I found about it. I do think it is over-priced for 12 pieces of plastic. 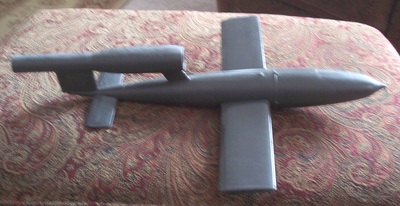 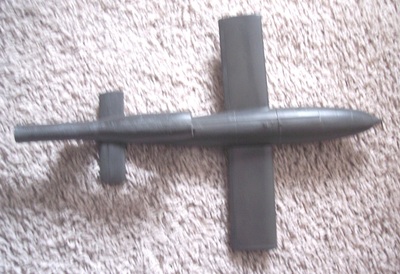