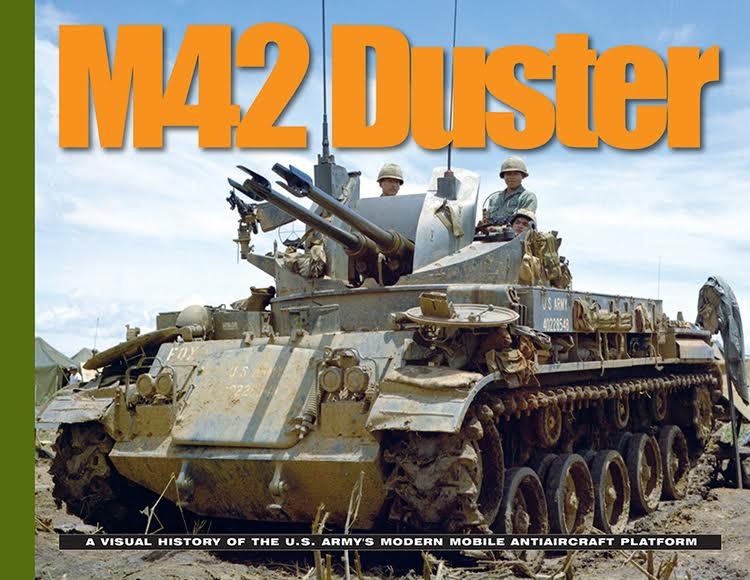 The M42 40 mm Self-Propelled Anti-Aircraft Gun, or "Duster," is an armored light air-defense gun built for the U.S. Army from 1952 until December 1959. Production of this vehicle was performed by the tank division of the General Motors Corporation. It used components from the M41 light tank and was constructed of all welded steel.

Although the M42 Duster was initially designed for an anti-aircraft role, it proved highly successful when used in the Vietnam War against unarmored ground forces.

Ampersand Publishing is a Hobby Link Japan company. They are based in Delray Beach, Florida USA.

This book was printed in China. It came in a self-sealing clear envelope.

The book contains 178 color photos and 80 black and white ones. All are very sharp, well-focused shots.

There are 2 data lists provided.

A number of M42 Dusters survive in the U.S. and several foriegn countries. There are 102 walk-around type color photos of one that is owned and restored by the National Museum of Americans in Wartime at the end of the book.

This is one neat book and will be of great interest to modelers and armor enthusiasts alike.
There are two M42 model kits available. One is by Tamiya and the other one by AFV Club.
Highly recommended.

I want to thank the folks at Ampersand and at Hobby Link for this review sample.

All Ampersand books can be viewed on their website at:

www.ampersandpubco.com
They invite dealers for their books.