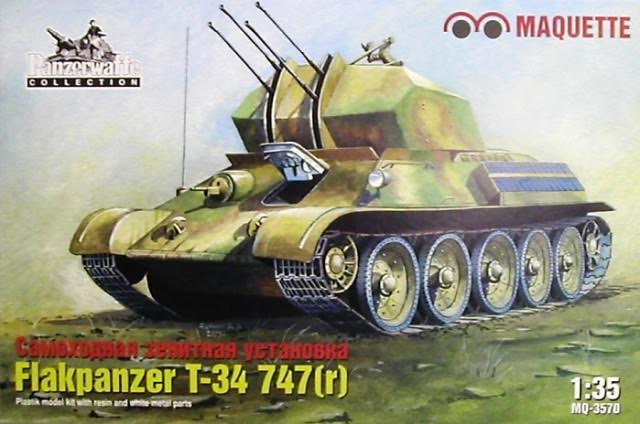 Ammunition was stored in metal cases on racks on the sides of the rear of the vehicle. This vehicle served with the Gruppe Fuhrer section along with a command Tiger. (perhaps the only Porsche one, with a turret, that DML has a kit of?), and a Bergepanther that had been refitted with a Pz.Kpfw.IV turret. All rather unusual vehicles.
​THE KIT:

Maquette is a model company based in the Ukraine.

The box art shows a Flakpanzer T-34 747 ( r ) in a rather faded German cammo scheme of red-brown and green over a earth yellow base. No markings are shown.

A side panel shows the box arts for five other kits in the Maquette armor line: a Pz.SpWg Lince, a Pz.Kpfw. 38(t) Ausf.G, a Marder II D. a Sig 33 auf Pz.Kpfw.I Ausf.B Bison and a Marder III.
WHAT'S IN THE BOX:

This kit contains 13 very light gray trees of parts and four trees of black parts that are loose and not cello bagged.

The black trees had parts that had rubbed off them due to friction against the gray trees. Maquette should have used  cello bags.

There are two zip-lock type cello bags that contain resin, white metal and PE parts. There is no decal sheet provided or any crew figures. However,

I have always noticed that WWII Russian AFV's were usually either unmarked or had slogans on them.

The final item in the kit is the instruction sheet that folds into four pages.

Page one begins with a short history of the vehicle in Russian and English. This is followed by a two view painting guide drawing.

It shows a generic paint scheme of basic earth yellow with red-brown and green stripes, like what’s shown on the box art.

These colors are called out in RAL numbers, for those of you that can get the Model Master paints that use these numbers on their labels. The vehicle depicted is said to be serving with the Pz.Jager. ABT. 653, Galicia, Poland, summer of 1944. No markings are shown.

However, the markings for 653 are the same ones that are in DMLs Porsche Tiger kit (the circle with a winged sword in it) or available from Archer dry transfers on their Tiger Mix #4 sheet. I would assume that the German national cross, to use on this model, would have to a prominent one so that their own army would not fire on it

…being as it is on a Soviet chassis. I don’t know how many of this type vehicle was converted or used by the German panzer arm.

Page two of the instructions begins with parts tree drawings, followed by the first four assembly steps. In step one you are required to cut some of the detail off of the upper body shell.

Pages three and four give us the balance of a total of 18 assembly steps. In step seven you can opt to have the cooling flaps that are inside the air intake for the engine either open or closed position. The four ack ack gun barrels can be elevated and depressed if assembled correctly.

Tree letter A contains the vehicle’s top, bottom and side pieces. 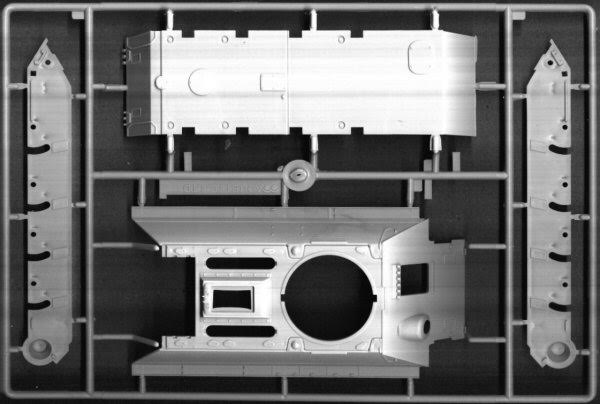 ​There are two identical letter B parts trees, These contain wheel caps, tow hooks, suspension arms, exhaust pipes and their shields, grab handles, external fuel drums, idler wheels and drive sprockets, eight box like structures (that go inside the hull) have nasty sinks in them, but they will never be seen inside the hull once the kit is assembled. There are 50 parts on each tree.

However, 15 of these parts are X’d out on the parts tree drawings as being excess or not needed to complete the kit.

This drawing shows that the tree originally had alternate road wheels on it. However, they were removed at Maquette’s factory before packaging. They are X’d off the drawing too. The majority of the parts not used are for the external fuel drums and their cradles. 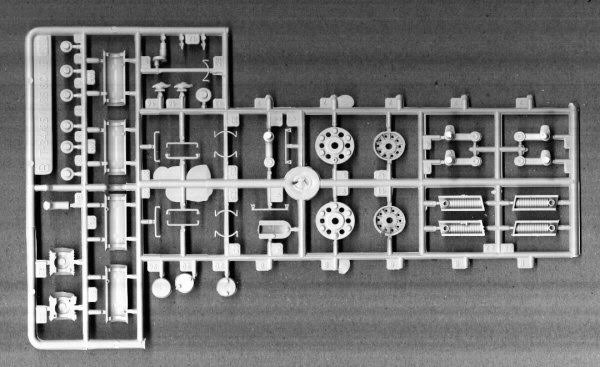 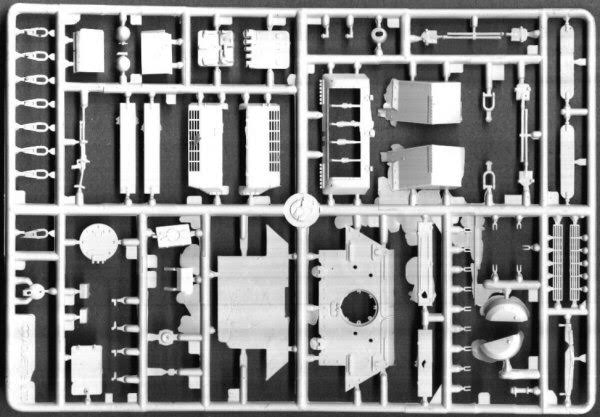 There are two identical letter E parts trees. These are the inner and outer road wheels. There are actually four parts trees that are separate for letter E. two trees are the inner wheels and two are the outer ones. (five wheels per tree). 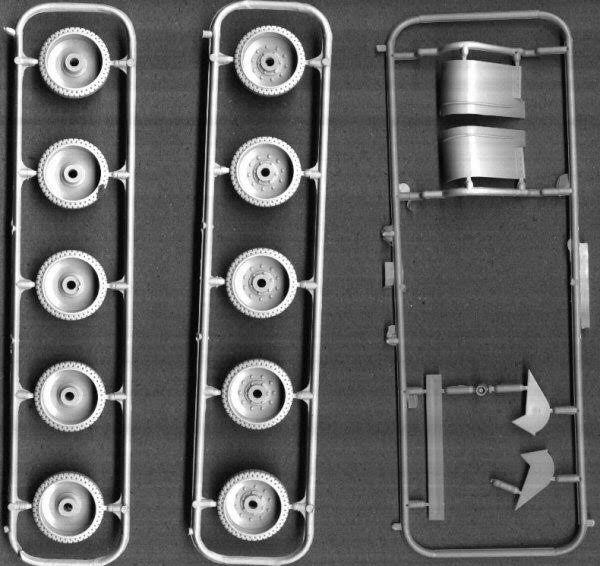 I found that rubbing around in the kit had knocked off all the parts that are the cone shaped muzzle pieces and also one of the ammo clips. I put these into one of the zip locked cello bags, with the resin and white metal parts, for safe keeping. 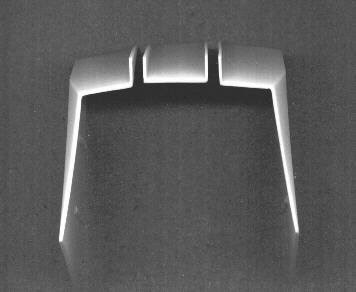 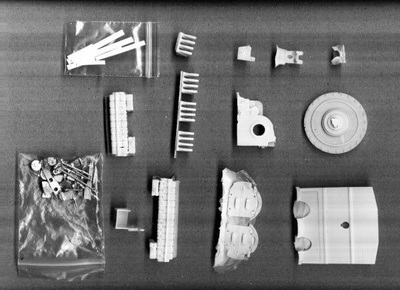 ​There are four identical letter K parts trees. These hold the individual track links. There are 40 links per tree. 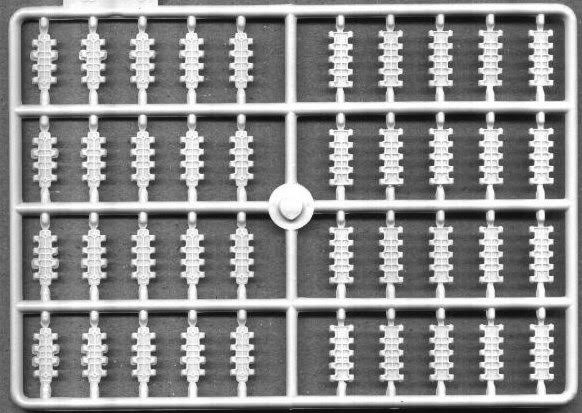 ​You get a PE part that is the engine air intake screen and nine white metal parts are more parts for the gun assembly.

A piece of white nylon string, 120mm long, is provided to fabricate tow cables from.
This looks like it will make up nicely into a very unusual vehicle.

As said earlier, there are no figures include or decals.

The kit is recommended to advanced armor modelers. I would agree with that, owing to the dissimilar parts materials and the complexity of the kit.
Kit was courtesy of my wallet years ago.
Here are some in progress photos of the kit so far. 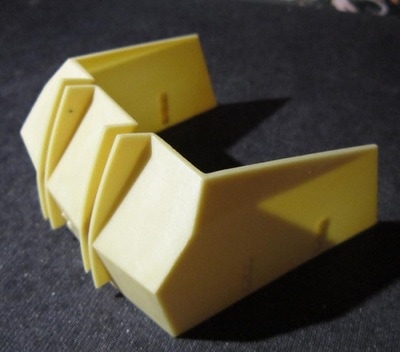 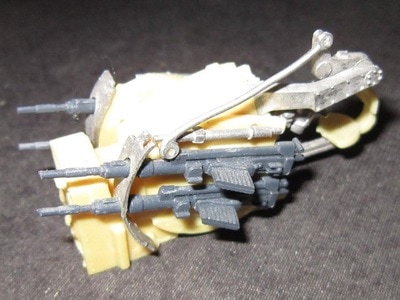